How to get sued by the US Chamber of Commerce 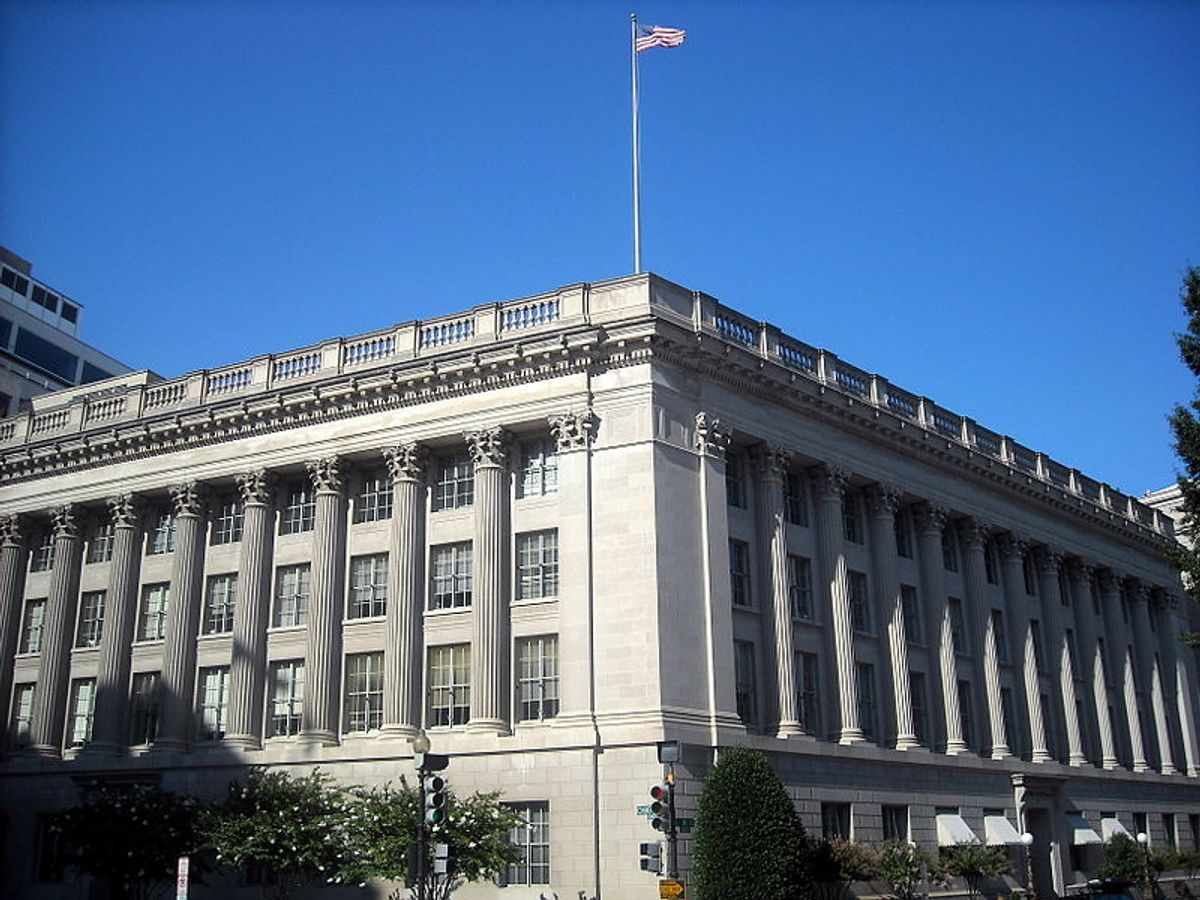 Last week the U.S. Chamber of Commerce — the world’s most formidable big business lobby — quietly abandoned a trademark infringement lawsuit against a number of individuals connected to activist pranksters the Yes Men, including John and Jane Doe 1-20, in whose mysterious company I was presumably represented. It’s been a while since I’ve given any thought to the circumstances surrounding the four-year-old suit, and while the news came as a relief, it also made me a little nostalgic for a particularly madcap chapter in my colorful career. By the standards of my fancy-sounding job, that year as “Director of Marketing and Outreach” for the release of the Yes Men’s latest documentary film, “The Yes Men Fix the World,” being sued by the U.S. Chamber of Commerce felt par for the course.

Allow me to take you back to the fall of 2009, where from a small, crowded academic office-cum-film distribution headquarters, my official duties involved coordinating a marauding ragtag volunteer “Survivaball” army, helping to organize mini-riots at Whole Foods, and avoiding capture by the NYPD after a failed attempt to launch an amphibious assault on the U.N. (which led to the apprehension of one of my colleagues). There was also a film to release, marketing materials to distribute, post-film Q&As to schedule and so on. So with the documentary slated to run in Washington, D.C., Yes Men cofounder Andy Bichlbaum and I had been chatting with activist groups there about other fun stuff we could do as long as we were in town. Over the course of those conversations a big, bad bogeyman kept rearing its head: the U.S. Chamber of Commerce.

Rewind for a quick bit of context. It feels like eons ago now, but at the time there were real hopes for a binding agreement to cut down global carbon emissions, with the big U.N.-sponsored climate summit in Copenhagen just months away. It was also Obama’s first year in office, there were Democratic majorities in both the House and the Senate, and the Senate was in the midst of debating substantive climate legislation, after the House passed similar legislation.

Enter stage right the U.S. Chamber of Commerce, a group claiming to be the official voice in Washington for millions of American businesses, big and small. In practice, especially when it comes to energy policy, the Chamber lobbies for hard-right policies favored by the biggest of the Big Oil and Big Coal companies. That year the Chamber was easily the largest force working to kill climate legislation, spending $300,000 a day on lobbying and, as we would learn in due time, it was also one of the most litigious.

With the lawsuit no longer hanging over our heads, details of which I’ll describe below, now feels like a good time to pull back the curtain and share a useful step-by-step guide for anybody else out there looking to get sued by the Chamber of Commerce or another equally worthy foe. I should be clear that usually getting sued by a majorly cashed-up corporate lobbying group is probably not a great idea. No matter how spurious their case, these groups are expert at using the law as a blunt weapon to silence critics. But in this case, especially after high-powered legal allies stepped up to the plate to help the Yes Men and John and Jane Doe 1-20 defend themselves from the suit, I think the Chamber just ended up calling extra attention to the issue at hand — the big business mega-lobby’s corrupting effect on our democracy.

So having assessed the risks, for all those tempted to try their luck at related high jinks, I recommend following the steps below.

Step one: Get to know some scrappy, talented young climate activists in the nation’s capital. If they have office space to work out of in D.C., even better. Spend some time on the phone with them and do some brainstorming on creative ways to get news outlets interested in looking at the destructive role the Chamber’s massive lobbying apparatus plays on our politics.

Step two: Free your mind and think about what kind of role the Chamber could play in U.S. politics if its better angels were allowed to hold sway. Think about how to make that happen. Call up the prestigious National Press Club, two blocks from the White House, and find out how much it costs to rent a room for an hour or two (much less, it turns out, than at the Chamber of Commerce itself, which was our first choice).

Step three: Study the Chamber of Commerce’s website, then mimic the content and style of the Chamber’s site. Register a few new email addresses with that domain, and borrow the Chamber’s cheesy logo and slap it on top of a press release template. Now you’re ready to tell members of the press about an exciting new direction for the Chamber.

Step four: While driving a minivan down I-95 from New York to D.C., prepare a speech that the Chamber will deliver at a packed press conference the following day. Don’t forget to print out a full color copy of the Chamber’s logo to slap on the podium at the front of the room.

Step five: You want members of the press to show up at your press conference and that the room is packed. After all, you’ve got a great speech, and you’ve got Yes Man Andy Bichlbaum styled out in a $20 thrift store suit. Solution: Contact some friends and colleagues in D.C., ask them to dress business casual and show up at the National Press Club with reporter notepads, and to be ready to ask the Chamber of Commerce some tough questions on climate change.

Step six. Showtime: Send Andy Bichlbaum, aka Chamber of Commerce flack “Hingo Sembra,” out to the podium to deliver a speech, the likes of which have rarely been heard in the well-appointed National Press Club; a speech that opens with a stark warning:

Ecologists tell us that if we don’t enact dramatic reductions in carbon emissions today, within five years we could begin facing the propagating feedback loops of runaway climate change, which would mean a destruction of food and water supplies worldwide, with the result of mass migrations, famine and death on a scale never before imagined. Needless to say, that would be bad for business.

Step seven: While the press conference is the main event, don’t forget to send the release out to broadcast outlets that may not be able to attend. That way both CNBC and Fox Business News can give on-air breaking news updates about the Chamber’s surprise about-face on climate policy.

Bonus step: After the speech and a first round of questions from “reporters” and reporters, make sure an actual press rep from the Chamber barges in and declares the press conference a fraud. Cue an unforgettable showdown, massive national media coverage that puts a spotlight on the Chamber’s backward stance on climate, and soon thereafter, a lawsuit from the Chamber alleging amongst other things that the spoof was all part of an insidious plan … to sell DVDs. As if anybody actually buys DVDs any more.

Four years later and with the lawsuit now officially history, I’m reminded of the initial doubts I had about accepting that film release gig in the first place — a job I took on shortly after graduating from one of the country’s most prestigious journalism schools. At the time, I figured that going to work for a group of people whose notoriety comes from fooling the media to call attention to social and environmental ills — in lieu of say, landing a cub reporter gig at some second tier news outlet — would be the effective end to my career as a “serious journalist.” And I do wonder sometimes where I’d be now if I had followed a path that put me in a place to report on that faux press conference, as opposed to being one of the people who produced it. For the most part though I haven’t looked back since. I love journalism, and many of the people I respect the most are journalists. But while I still call myself a writer, I stopped calling myself a journalist with a big-J a while ago. It’s just too damn fun helping to make news happen, shaping events and working in some form or fashion as an activist, lawsuits and all.

Joseph Huff-Hannon is an award-winning writer and a Senior Campaigner with Avaaz.org, a global human rights and social justice campaigning network with 20+ million members. Joseph recommends that every American citizen, at least once in his or her lifetime, attend a naturalization ceremony.