James Gandolfini: "No character captured the longing and melancholy of American life better than Tony Soprano" 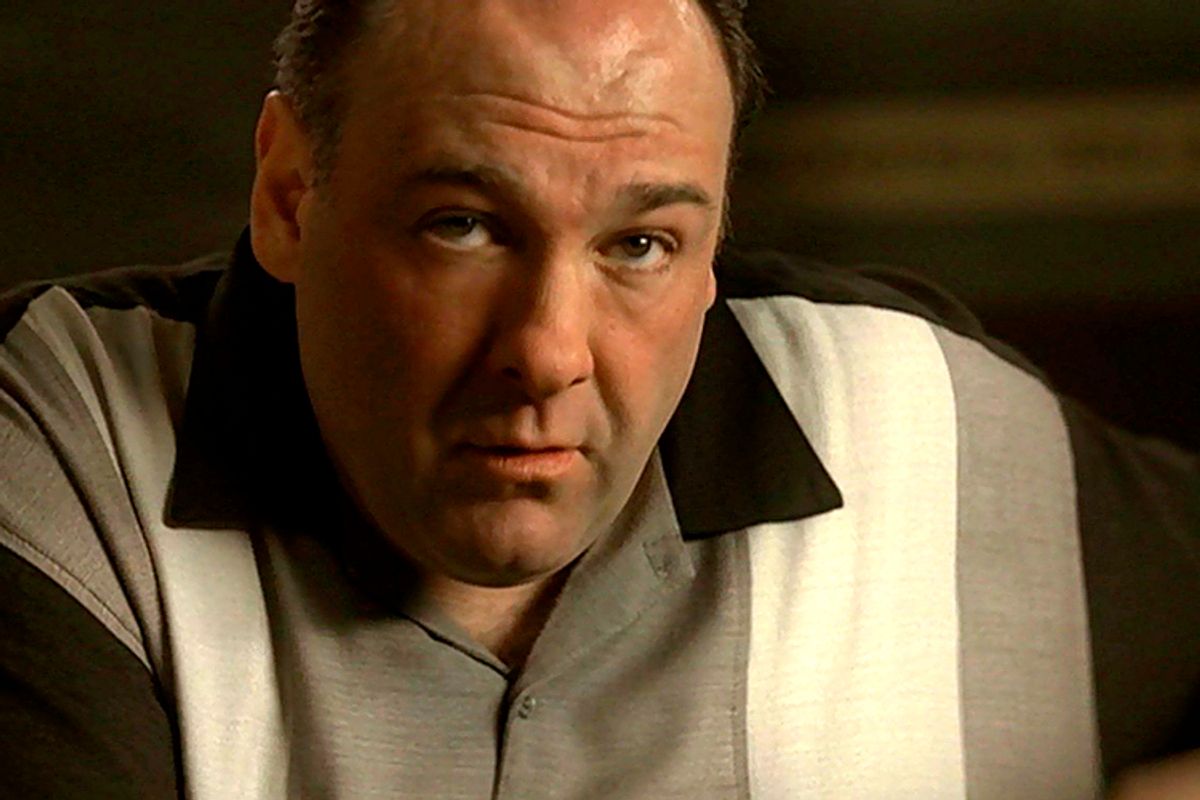 There's a scene from the last season of "The Sopranos" where Tony, Carmela, Janice and Bobby are playing Monopoly together and everyone's drinking too much. Janice launches into an anecdote about her dad shooting a hole in her mom's beehive hairdo, and Tony starts to look visibly sick. "I can't believe you never told me that story!" Carmela laughingly yells at Tony. "Yeah, what's the big deal?" Janice says to Tony. "Because it makes us look like a fucking dysfunctional family!" Tony growls. A few minutes later, though, after Tony insults Janice, Tony and Bobby are trading blows. And then, Tony is laying on the floor, covered in blood. (I guess the cat's out of the bag on the dysfunctional family thing, huh, Tone?)

In another actor's hands, that scene is just your typical snapshot of a hotheaded patriarch in denial, an Archie Bunker or a Rabbit Angstrom or a "Great Santini" for the new millennium. James Gandolfini, though, knew just how to tease out the storms raging inside Tony Soprano. His bullying always had this faint hint of self-consciousness to it, suggesting the vaguest whiff of guilt behind that surly mug. When Tony felt anxious, Gandolfini made us feel anxious, too. We could hear Tony start to breathe through his nose, like a bull growing agitated at the sight of the color red. His words got percussive and clipped as his heart raced faster.

But just as he could snort and paw at the ground, Gandolfini's raging bull could also sit quietly and sniff the flowers just like Ferdinand the bull from Munro Leaf's classic children's story. In the Monopoly scene, Tony's growing shame over Janice's tale becomes palpable thanks to a heavy sigh, an impatient rub of the eyebrow, a tiny twitch of the nose indicating that his fury is about to spill over and spoil the night. Then there's that glowering look out of the corner of Tony's eye, like he's not sure who to blame for this yet, but he's about to explode regardless. Even when Gandolfini delivers lines that are turgid with a tragicomic denial (Who doesn't already know this family is dysfunctional?), we believe every word out of his mouth. And at the end of the scene, when Tony has been shamefully bested by Bobby, and Bobby comes to the doorway to say he's sorry? Gandolfini makes Tony look truly pathetic but also so pitiable, hunched and frowning like a small child. But there's also stiffness in his shoulders, demonstrating the shame of a prideful man who doesn't know how to apologize, who can't face the truth about himself, and who can't let bygones be bygones.

Gandolfini took Tony Soprano -- one of the darkest, most malevolent characters to grace the small screen -- and he transformed him into a flawed human who might annoy or even disgust us, but who always felt worthy of our forgiveness. No TV character captured the longing and melancholy of American life better than Tony Soprano, and no actor could bring those emotions to the surface better than Gandolfini. The actor had genuine love and empathy for his character, and it showed. Instead of flattening Tony into a cartoon (and mob bosses are usually cartoons, let's face it), he made Tony more vibrant and real than any TV antihero before or after.

Any trial that David Chase set before Tony Soprano, from panic attacks to guilt to nerves to rage to vengeance, Gandolfini rose to the challenge, fleshing out the tragic shortcomings of the American patriarch. When Tony had a favor to ask, Gandolfini would temper his swagger with a little bashfulness, some embarrassment at needing something from another human being. He knew how to telegraph Tony's lack of comfort with being beholden to anyone. When Tony made jokes, Gandolfini knew how to half-bungle the punch line, reminding us of how inflexible and awkward this man could be, menacing but still as unsure of himself as a jittery boy. And Gandolfini could turn a kind of porcine smugness into bewilderment in a matter of seconds. One minute, Tony was out by the pool, pouring lighter fluid on his barbeque, chomping on a big cigar and chuckling to himself as the ducks frolicked in his pool. The next minute, the ducks were flying away and Tony's face went dark. His eyes darted back and forth and then he tumbled sideways like a fallen tree as a mournful aria played.

Later in the same episode, Tony told Dr. Melfi, "It's good to be in something from the ground floor. I came too late for that and I know. But lately, I'm getting the feeling that I came in at the end. The best is over." If there was one reigning sentiment to "The Sopranos," it was that the golden days of American supremacy, of the unquestioned patriarch, of living the suburban dream of decadent overconsumption, were fading fast. Tony's nostalgia for the past, for some old-fashioned vision of easy living surrounded by an adoring family, was the engine that drove the show forward. We were treated to an extreme close-up of a man whose old masculine tricks – bullying, threats, bribes, seduction, teasing and outright violence – didn't work anymore. Watching Tony try to come to grips with his mistakes, his weakness and his confusion in the face of pressure sometimes felt like watching our bluster, our sense of ourselves, our might-makes-right beliefs as a country fall to pieces before our eyes.

Gandolfini intuitively understood that when you stripped away Tony's power and money and brute strength, what you got was something between a clown and a lost little boy. For a thuggish guy like Gandolfini to call up such vulnerability and unsteadiness was simply transfixing. The smallest little fumbling motion with those bear-paw hands, the slightest hunch, the sweetest glimmer of regret in those eyes – Gandolfini made us feel heartbroken over Tony, even when he was messing up or pushing away everyone he loved. Gandolfini made "The Sopranos" feel much richer and deeper and more poignantly tragic than a series about modern-day mobsters had any right to be.

Chase and Gandolfini effectively rewired our synapses around TV protagonists, demonstrating how oddly familiar and palpable a complexly layered antihero could become over the course of several seasons. TV writers and actors have been struggling to mimic and re-create and recapture Tony's conflicted darkness ever since, but there can only be one Tony Soprano.

Even as you rewatch that final, somewhat mundane scene of the series, when Tony enters the diner, pops a few quarters in the jukebox, and waits for his family to show up for dinner, James Gandolfini's brilliance is undeniable. He occupies that last scene with the casual unease of a man who doesn't know if he's predator or prey, king or peasant, crestfallen middle-aged man or optimistic boy. With every hopeful (or anxious?) glance at the door of the diner, Gandolfini makes our hearts catch in our throats. Tony's small talk never came off as easygoing or unself-conscious, and it doesn't here. Gandolfini was vibrating at some higher frequency in that scene, like a man poised at the edge of something bigger than himself. Although "The Sopranos" seemed to concern Tony's evolution as a man, ultimately Tony wasn't capable of evolving, so Chase suspended him in sap in an unremarkable moment, stuffing his face with onion rings while Journey urged us not to stop believing. Tony wasn't gunned down like we expected, but he was damned for all time, and he reflected our empty pursuit of satisfaction back at us until the scene abruptly cut to black.

Learning of James Gandolfini's death at age 51 feels like another unexpected cut to darkness. Losing this man feels like losing some crucial piece of our culture, a vivid and heartbreaking icon of our tragic flaws as a country, whose fierceness and soft underbelly always had a way of tugging at our heartstrings. Tony Soprano is easily the most memorable TV character of all time. James Gandolfini never stopped believing in Tony Soprano, and thanks to him, neither did we.