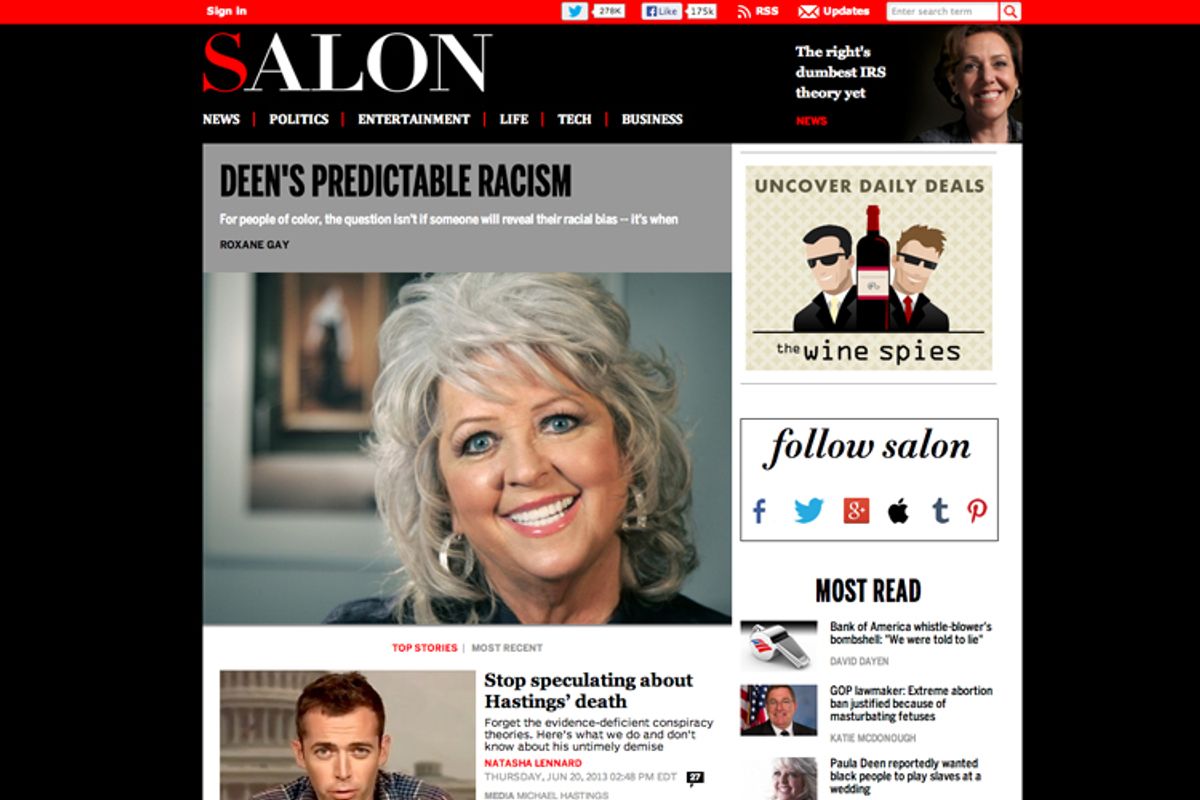 Deep inside an important piece out today from McCatchy's Marisa Taylor and Jonathan Landay about the administration's government-wide crackdown on leaks -- the ominously named "Insider Threat Program" -- we learn that the Pentagon, which is leading up the sweeping effort, appears to think that reading Salon or the the Onion makes you a potential leak threat. It's not entirely clear from the unnamed source's quote, but here's what Taylor and Landay report:

The Defense Department, traditionally a leading source of media leaks, is still setting up its program, but it has taken numerous steps. They include creating a unit that reviews news reports every day for leaks of classified defense information and implementing new training courses to teach employees how to recognize security risks, including “high-risk” and “disruptive” behaviors among co-workers, according to Defense Department documents reviewed by McClatchy.

“It’s about people’s profiles, their approach to work, how they interact with management. Are they cheery? Are they looking at Salon.com or The Onion during their lunch break? This is about ‘The Stepford Wives,’” said a second senior Pentagon official, referring to online publications and a 1975 movie about robotically docile housewives. The official said he wanted to remain anonymous to avoid being punished for criticizing the program.

But while Salon has long been critical of the Bush and Obama administrations' overreach on civil liberties and drones (including the years Glenn Greenwald worked here), we hardly think anyone should be profiled for reading us. This is especially true for the people actually running these controversial programs, who are perhaps the ones most in need of hearing alternative views.

And we're not sure what the Onion did to anyone, though a troubling new study out today does show that people spend much of their work day plotting revenge.

But the program Taylor and Landay detail is exactly the kind of thing that should be discussed transparently. The "unprecedented initiative" expands far beyond security agencies to employees at seemingly innocuous places like the Peace Corps and the Department of Agriculture. And it targets all leaks, including nonclassified information.

Perhaps most troubling, the government has instructed employees and contractors to snoop and snitch on their colleagues, telling them to be on the lookout for “high-risk persons or behaviors." Failing to report suspicious colleagues could lead to penalties -- even criminal charges. And the guidelines require managers to revoke security clearances for even a single infraction, something that can kill a bureaucrat's career.

“Hammer this fact home," a June 2012 Pentagon strategy memo for the program reads, "leaking is tantamount to aiding the enemies of the United States."

This will all have the effect of making it all the more difficult for the public to understand what their government is doing, via media reports, and may have a chilling effect on "creative thinking" inside agencies, Taylor and Landay report.

What do you think about the aforementioned quote by the Pentagon official? Are they suggesting that reading Salon is subversive behavior? Are they right? Tell us what you think in the comments section below.