The secret history of the Bill of Rights

Activists today invoke the 2nd and 4th Amendments as if they're kindred spirits with Madison. Here's the real story 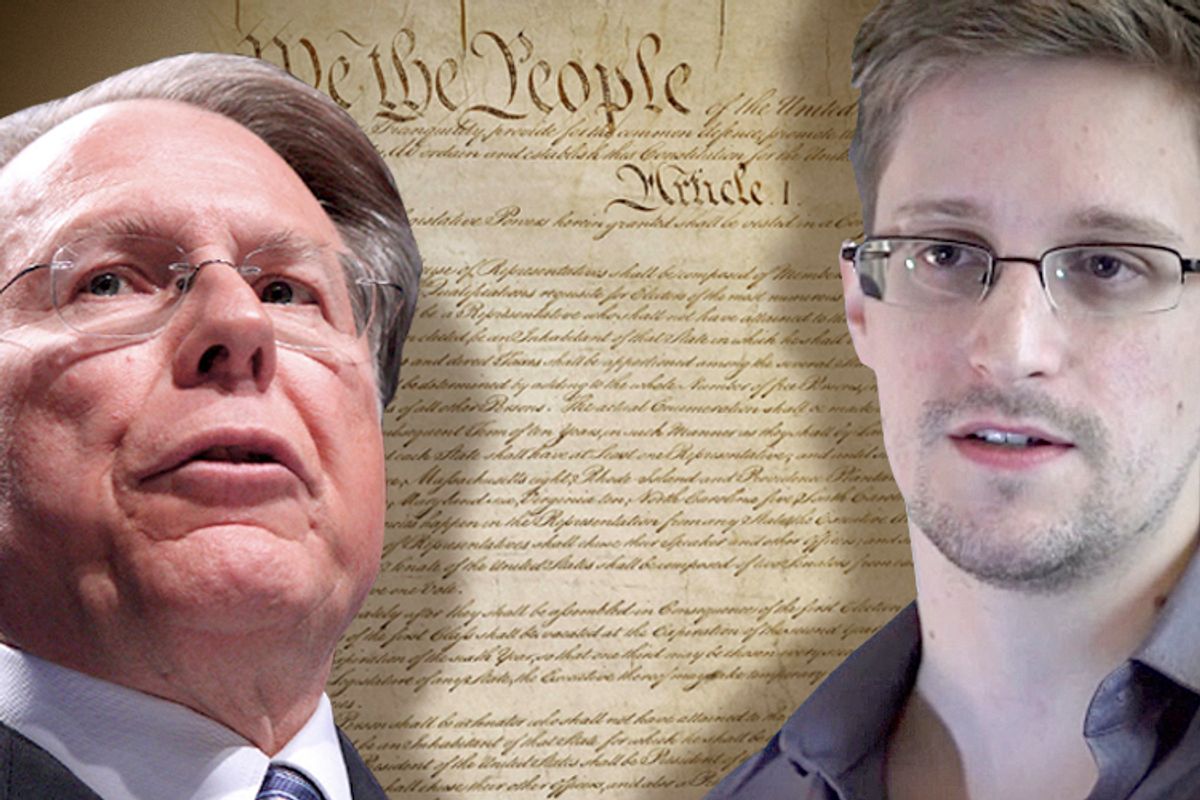 Is the Bill of Rights — made up by the first 10 amendments to the U.S. Constitution — the foundation of American liberty? So we are told by civil libertarians on the left alarmed by government surveillance programs, and by opponents of gun control on the right. The truth about the Founders and the Bill of Rights, however, is quite at odds with modern civil libertarian mythology.

In Federalist 84, Hamilton observes that a bill of rights, as a bargain between the people and a separate ruler, is irrelevant in a republic in which the people themselves are the collective sovereign.

It has been several times truly remarked, that bills of rights are in their origin, stipulations between kings and their subjects, abridgments of prerogative in favor of privilege, reservations of rights not surrendered to the prince. …It is evident, therefore, that according to their primitive signification, they [i.e. bills of rights] have no application to constitutions professedly founded upon the power of the people, and executed by their immediate representatives and servants. Here, in strictness, the people surrender nothing, and as they retain every thing, they have no need of particular reservations.

Hamilton also argues that listing some rights in the Constitution might inadvertently endanger other rights, which would be assumed to be unprotected because they were not mentioned:

I go further, and affirm that bills of rights, in the sense and in the extent in which they are contended for, are not only unnecessary in the proposed constitution, but would even be dangerous. They would contain various exceptions to powers which are not granted; and on this very account, would afford a colourable pretext to claim more than were granted.

Hamilton, the founder of the New York Post, did not agree that a bill of rights was necessary to protect freedom of the press:

What signifies a declaration that "the liberty of the press shall be inviolably preserved?" What is the liberty of the press? Who can give it any definition which would not leave the utmost latitude for evasion? I hold it to be impracticable; and from this, I infer, that its security, whatever fine declarations may be inserted in any constitution respecting it, must altogether depend on public opinion, and on the general spirit of the people and of the government.

Hamilton concluded that the regulation of power by the federal Constitution itself, not a laundry list of specific rights, was the best protection of liberty in the new country:

The truth is, after all the declamation we have heard, that the constitution is itself in every rational sense, and to every useful purpose, a bill of rights.

James Madison, the “father of the Constitution,” shared the skepticism of the majority of the Founders about bills of rights. However, the Anti-Federalists, the opponents of a stronger federal government, were particularly influential in slave states like Madison’s Virginia, where they were inspired by some of his fellow slave owners like Thomas Jefferson, George Mason and Patrick Henry. These men were hardly precursors of the ACLU. Mason and Henry in particular objected to the federal Constitution because it did not sufficiently prevent the federal government from intervening in Southern slavery. Unlike George Washington, the only slave-holding president who freed his own slaves at his death, and a supporter of a strong federal government, Mason and Henry were hypocrites who denounced slavery in the abstract while opposing any government power that might infringe upon their despotic personal power over their own slave “property.”

As a delegate at the Constitutional Convention, George Mason, who authored Virginia’s bill of rights, refused to sign the final product, objected to the federal Constitution because of a lack of a bill of rights — and inadequate safeguards to slavery. As a delegate to Virginia’s ratifying convention, Mason denounced the Constitution for allowing a two-decade continuation of the slave trade (which lowered the value of the slaves that Virginian planters sold to slave owners in other states) and also for doing too little to secure slavery from federal interference — for example, a hypothetical federal tax on slavery that would force emancipation:

As much as I value a union of all the states, I would not admit the Southern States into the Union unless they agree to the discontinuance of this disgraceful trade, because it would bring weakness, and not strength, to the Union. And, though this infamous traffic be continued, we have no security for the property of that kind which we have already. There is no clause in the Constitution to secure it; for they may lay such a tax as will amount to manumission [emphasis added]…. Yet they have not secured us the property of the slaves we have already. So that they have "done what they ought not to have done, and have left undone what they ought to have done.”

Another Anti-Federalist opponent of the Constitution Patrick Henry feared that the military power of the federal government might be used to end slavery, something that indeed occurred during the Civil War, when President Lincoln justified the Emancipation Proclamation as a war measure. As Thom Hartman has pointed out, for Southern slave owners like Henry the chief purpose of what became the Second Amendment was to prevent the federal government from interfering with state militias used to repress slaves:

May Congress not say, that every black man must fight? Did we not see a little of this last war? We were not so hard pushed as to make emancipation general; but acts of Assembly passed that every slave who would go to the army should be free.

Ironically, it is to the pressure of the slave-holding oligarchy on Virginia’s federal representatives that we owe the Bill of Rights. To be specific, in running for the first Congress in 1788 James Madison beat his rival James Monroe by only 336 votes out of 2,280. This near-death experience led Madison to do a classic political flip-flop, trying to co-opt his opponents by embracing their cause, the addition of a bill of rights to the Constitution. Pennsylvania’s Sen. Robert Morris sneered that Madison “got frightened in Virginia and wrote a book” — the amendments that became the Bill of Rights.

Madison thought that the states were greater menaces to liberty than the federal government, but his proposal that any federal bill of rights govern the states as well as the federal government died in Congress. (According to today’s judicial doctrine, some but not all of the rights in the first 10 amendments have applied to the states since the passage of the 14th Amendment after the Civil War). Of the 12 amendments drafted by Madison and sent to the states for ratification by Congress, only 10 were initially ratified, becoming today’s Bill of Rights. An 11th, governing pay raises for Congress, was ratified only in 1992 as the 27th amendment, while the 12th, about congressional apportionment, failed to win state ratification.

In introducing his proposed amendments to Congress, Madison acknowledged that his bill of rights was an incoherent philosophical and legal mess:

In some instances they assert those rights which are exercised by the people in forming and establishing a plan of Government. In other instances, they specify those rights which are retained when particular powers are given up to be exercised by the Legislature. In other instances, they specify positive rights, which may seem to result from the nature of the compact. Trial by jury cannot be considered as a natural right, but a right resulting from a social compact which regulates the action of the community, but is as essential to secure the liberty of the people as any one of the pre-existent rights of nature. In other instances, they lay down dogmatic maxims with respect to the construction of the Government; declaring that the legislative, executive, and judicial branches shall be kept separate and distinct.

Madison’s bill of rights was a hodgepodge slapped together hastily to try to conciliate former opponents of the newly ratified federal Constitution.  This was a typical case of damage control by a reluctant politician trying to head off a more radical alternative by enacting a watered-down substitute. Madison would have been proud to be remembered as “the Father of the Constitution.” But he would have been appalled to be told that without his Bill of Rights the U.S. would be a tyranny. That was the rhetoric of the Anti-Federalists whom he reluctantly sought to appease.

History has vindicated the skepticism about bills of rights shared by Hamilton and Madison and a majority of the drafters and ratifiers of the U.S. Constitution. Mere paper guarantees of rights have never been enough to secure liberty, in periods when the public is panicked — think of Lincoln’s excessive suspension of habeas corpus during the Civil War, or FDR’s wartime internment of Japanese-Americans. And the American system of checks and balances has repeatedly, if belatedly, worked to check imbalances of power, as it did when Congress reined in “the imperial presidency” in the 1970s.

In the contemporary debate about civil liberties and government surveillance, absolutist civil libertarians routinely claim that “the Founders” viewed the Bill of Rights as essential to American liberty. But paranoid rhetoric about our allegedly tyrannical government is closer to the rhetoric of the Anti-Federalists who denounced the U.S. Constitution than to the thinking of the Constitution’s drafters, ratifiers and supporters. The real Founders thought little of lists of abstract rights, putting their faith instead in checks and balances and accountability through elections. In the spirit of the real Founders, we should be debating what kind of system of congressional and judicial oversight of executive intelligence activity can best balance individual liberty with national security — and we should leave anti-government paranoia to today’s Anti-Federalists.