"Devious Maids" skewers the one percent

But this summer soap, the rare show centering on working class people, still wants everyone to get rich 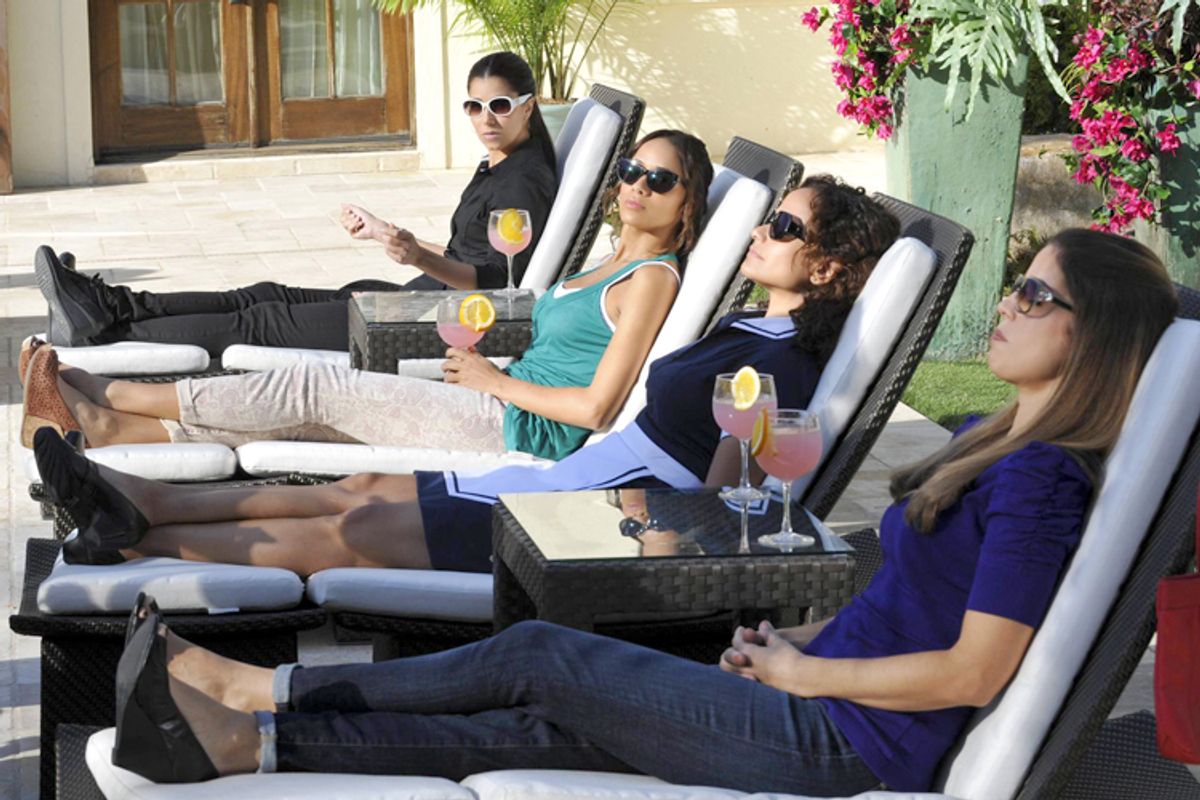 I was recently having a conversation about working class people and television, and how it has become nearly impossible to find the former on the latter. Sitcoms used to have a blue-collar tradition, from “All in the Family” to “Roseanne,” but in recent years that's been all but abandoned. People on television are usually rich, nearly so, or becoming so. They are typically untroubled by financial practicalities or only marginally bothered by them. Into this desert of class diversity comes Lifetime’s cheeky new melodrama “Devious Maids,” premiering Sunday, which features five working class Latina women, but still just flickers in and out of class consciousness.

“Devious Maids” comes from Marc Cherry, the creator of “Desperate Housewives” and a man who clearly believes in sticking to certain naming conventions. Tonally, the shows are very similar: comedic super-soaps about a group of women with a central murder mystery, crazy plot turns, and a knowing, winking tone. The stars of “Devious Maids” are not housewives but Latina domestic servants, all working for crazy rich people in Beverly Hills. In the first minutes of the pilot, a maid, Flora, is murdered by a person unknown. When her employer, a camp character on the order of Cruella De Vil, breaks down, it’s not because of the death, but the mess: “My maid was murdered! Who is going to clean all this up?” she screeches.

Soon thereafter, Marisol ("Ugly Betty"’s Ana Ortiz), appears on the scene, eager to find out more about Flora’s murder and ingratiate herself with the other women who work nearby. These include the bratty Carmen ("Without a Trace"'s Roselyn Sanchez), an ultra-ambitious singer who has gained employment in a superstar’s house, hoping she’ll be able to get him to hear her music; Rosie (Dania Ramirez), a kind, widowed nanny working to bring her small son to America from Mexico while she cares for the son of a soap actor ("Melrose Place"’s Grant Show) and his bitchy, selfish wife; and Zoila (“Scrub"’s Judy Reyes) and her daughter Valentina (Edy Ganem), who work in the home of a histrionic woman  (soap legend Susan Lucci) and her rich son, who Valentina loves even though her mother insists it will never work out.

“Devious Maids” has already been accused of perpetuating stereotypes for having all five Latina characters be domestic servants (though I suspect that Marisol, who in a flashback appears to have a maid of her own, is secretly rich), and been defended from these charges by executive producer Eva Longoria. But there’s a second-order stereotyping going on of the well-meaning and yet still totally ghettoizing variety, as June Thomas points out in her review for Slate. The show is a parade of “Latina maids who are both devious and pure of heart, and of their Caucasian employers, who are all selfish, utterly detestable, entitled snobs.” In other words, while the nasty white people get all the ridiculous, over-the-top lines and complicated, knotty emotions, the "good" Hispanic characters are largely straitjacketed into having no fun, imprisoned by their ethical superiority.

Having watched “Desperate Housewives,” I suspect that the goody-two-shoes nature of the Latina characters will be short-lived: Marc Cherry churns through too much plot to leave anyone pristine. Carmen, already, is a straight manipulator on the make not at all interested in being a maid — “you guys know how to be poor,” she tells her friend, “I do not.” — and willing to use a nice guy to get her way. But for now, the bias towards boring is definitely at work. Cherry should look at "Scandal," a show in which everyone of every color gets to be troubled and naughty and still expect our sympathy, to see how to improve.

Until then, there is something really fascinating about at least one half of "Devious Maids"' stereotyping: the part that turns it into the "indulge your vitriol for white ladies with too much money" hour. In one scene, Rosie's boss won't let Rosie go see a lawyer about her son's immigration because the boss has a facial appointment she refuses to cancel. Another woman doesn't want to hire Marisol because she has no accent and sounds like "she went to college" and thus appears to have "attitude." Wherever we are, culturally speaking, it appears to be a place where a TV show aspiring to be frothy, escapist and fun can get its dramatic climaxes and moments of triumph from a bunch of rich bitches — whose husbands are, by and large, much, much nicer than them – getting theirs. Gleefully skewering the one percent of obnoxious white ladies — and obnoxious, in the pilot anyway, is the only way they come — must have market-tested just fine.

This is not to suggest that “Devious Maids” has something larger to say about the inequity of American society. This is a TV show about class that does not for one minute want to leave the safe haven of real estate porn. Even if the rich are bitches, the show implies, we should still aspire to be them. “Devious Maids” may star people who have to work for a living, but since three of the five women are live-in maids, we never have to leave Beverly Hills. None of the domestics seem concerned about money. Rosie’s efforts to bring her son to America get back-burnered by the second episode. And Carmen and Valentina are pursuing affluence as hard as they can. "Devious Maids" finds a way to have all its stars sitting in lounge chairs by a pool — it may not make sense, but at least it looks like  "Sex and the City." The message of “Devious Maids” is not quite that the rich are no better than anyone else, but that anyone else — in this case, five maids — would make for better rich people than the already rich, which also happens to be one of the guiding fantasies of American life. I think this show, however flawed, just might be a big hit.