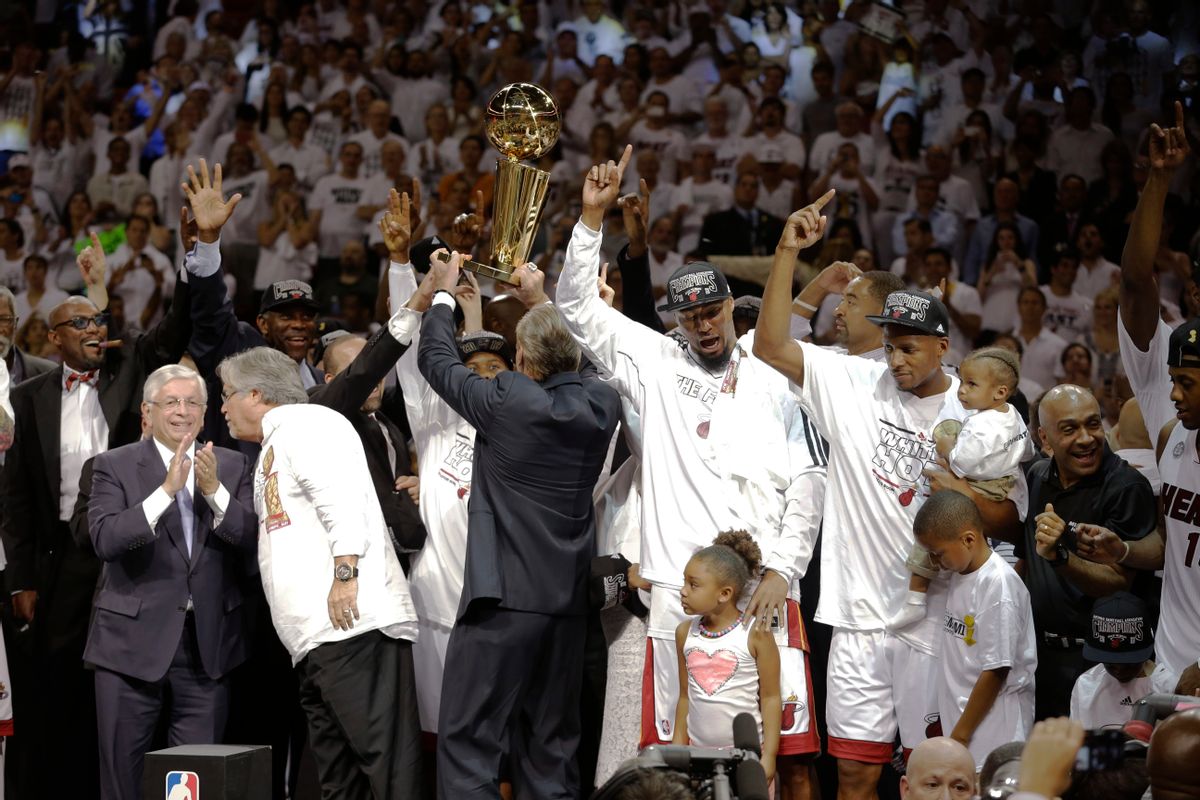 MIAMI (AP) — Victory in Game 7 brought more than another crown for LeBron James and the Miami Heat. It validated the team and its leader, forever cementing their place among the NBA's greats.

For the vanquished San Antonio Spurs, it simply compounded the misery of a championship that got away.

James led the Heat to their second straight title, scoring 37 points and grabbing 12 rebounds in a 95-88 victory Thursday night in a tense game that was tight until Miami pulled away in the final minute.

Capping their best season in franchise history — and perhaps the three-superstar system they used to build it — the Heat ran off with the second straight thriller in the NBA's first championship series to go the distance since 2010.

Two nights after his Game 6 save when the Heat were almost eliminated, James continued his unparalleled run through the basketball world, with two titles and an Olympic gold medal in the last 12 months.

"I work on my game a lot throughout the offseason," said James, who was MVP for the second straight finals. "I put a lot of work into it and to be able to come out here and (have) the results happen out on the floor is the ultimate. The ultimate. I'm at a loss for words."

He made five 3-pointers, defended Tony Parker when he had to, and did everything else that could ever be expected from the best player in the game.

The Heat became the NBA's first repeat champions since the Lakers in 2009-10, and the first team to beat the Spurs in the NBA Finals.

"It took everything we had as a team," Dwyane Wade said. "Credit to the San Antonio Spurs, they're an unbelievable team, an unbelievable franchise. This is the hardest series we ever had to play. But we're a resilient team and we did whatever it took."

Players and coaches hugged afterward — their respect for each other was obvious from the opening tipoff of Game 1 through the final buzzer.

A whisker away from a fifth title two nights earlier, the Spurs couldn't find a way to win it all in what was perhaps the last shot for Tim Duncan, Parker and Manu Ginobili to grab another ring together.

"In my case I still have Game 6 in my head," Ginobili said. "Today we played an OK game, they just made more shots than us. LeBron got hot. Shane (Battier), too. Those things can happen. But being so close and feeling that you are about to grab that trophy, and seeing it vanish is very hard."

They were trying to become the first team to win a Game 7 on the road since Washington beat Seattle in 1978, but those old guys ran out of gas just before the finish.

Fans stood, clapped and danced as the clock ticked down, when every score was answered by another score, each stop followed by a better stop. The Heat pushed their lead to six points a few times midway through the fourth but San Antonio kept coming back.

Duncan had 24 points and 12 rebounds for the Spurs, but missed a shot and follow attempt right under the basket with about 50 seconds left and the Spurs trailing by two.

James followed with a jumper — the shot the Spurs were daring him to take earlier in the series — to make it 92-88, sending San Antonio to a timeout as Glenn Frey's "The Heat Is On" blared over the arena's sound system.

He then came up with a steal and made two free throws for a six-point lead, and after Ginobili missed, James stalked toward the sideline, knowing it was over and that he was, once again, the last one standing.

Wade had 23 points and 10 rebounds for the Heat, who overcame a scoreless Chris Bosh by getting six 3-pointers and 18 points from Shane Battier.

"It was a great series and we all felt that," Spurs coach Gregg Popovich said. "I don't know if 'enjoy' is the right word, but in all honesty, even in defeat, I'm starting to enjoy what our group accomplished already, when you look back. And you need to do that, to put in perspective. So it's no fun to lose, but we lost to a better team. And you can live with that as long as you've given your best, and I think we have."

Streamers fell from the arena ceiling onto the fans for the second year in a row, but this one meant so much more. A narrow escape in Game 6 was still fresh in everyone's mind.

They were down 10 in the fourth quarter of that one before James led the charge back, finishing with a triple-double in Miami's 103-100 overtime victory. This one was nearly as tight, neither team leading by more than seven and the game tied 11 times.

Kawhi Leonard had 19 points and 16 rebounds for the Spurs, who had been 4 for 4 in the championship round. Ginobili had 18 points but Parker managed just 10 points on 3-of-12 shooting.

"Just give credit to the Miami Heat. LeBron was unbelievable. Dwyane was great. I just think they found a way to get it done," Duncan said. "We stayed in the game. We gave ourselves opportunities to win the game, we just couldn't turn that corner."

The Heat and coach Erik Spoelstra collected the Larry O'Brien trophy again from Commissioner David Stern, presiding over his final NBA Finals before retiring next February.

He couldn't have asked for a better way to go out.

James avenged his first finals loss, when his Cleveland Cavaliers were swept by the Spurs on 2007. That helped send James on his way to South Florida, realizing it would take more help to win titles that could never come alone.

He said he would appreciate this one more because of how tough it was. The Heat overpowered Oklahoma City in five games last year, a team of 20-something kids who weren't ready to be champions yet.

This came against a respected group of Spurs whose trio has combined for more than 100 playoff victories together and wanted one more in case this was San Antonio's last rodeo.

Duncan is 37 and Ginobili will be a 36-year-old free agent next month, the core of a franchise whose best days may be behind them.

Meanwhile, it's a potential dynasty along Biscayne Bay, but also one with a potentially small window. Wade's latest knee problems are a reminder that though he came into the NBA at the same time as James and Bosh, he's a couple of years older at 31 with wheels that have seen some miles.

James can become a free agent again next summer with another decision — though hopefully not another Decision — to make. He's comfortable in Miami and close with Wade, and the Heat have the leadership and commitment from owner Micky Arison and president Pat Riley to keep building a championship core around him.

Why would he want to leave?

San Antonio's most recent title came at James' expense. The Spurs exploited the weaknesses in James' game though knew someday they would be gone, Duncan telling him afterward that the league would someday belong to James.

And James simply isn't giving it back.

He came in averaging 33.8 points in Game 7s, already the best in NBA history, and was even better in this one.

He can't be defended the way he was six years ago, too strong inside and too solid from the outside. He drove Danny Green back like a tackling dummy to convert a three-point play in the second quarter, then knocked down a 3-pointer for the Heat's next score.

Heat fans, criticized over the last two days after many bolted before the finish Tuesday and then tried to force their way back in, weren't going anywhere early in this one. The game was too good.

And there was another celebration to watch.

The Heat had the classic championship hangover through the first few months of this season, too strong to lose at home but not committed enough to win on the road, where they were just 11-11 following a 102-89 loss in Indiana on Feb. 1.

They won in Toronto two nights later on Super Bowl Sunday and didn't lose again until well into March Madness, running off 27 straight victories before falling in Chicago on March 27 and finishing a franchise-best 66-16.

The small-market Spurs have always been a ratings killer, but interest grew throughout this series in their attempt to toppled the champs. Game 6 drew more than 20 million viewers, a total that Game 7 was expected to top.

And the games got better, too. Games 2-5 were all decided by double digits, neither team able to carry its momentum from one game to the next.

This one was back and forth for more than three quarters, with Mario Chalmers' 3-pointer at the buzzer giving Miami a 72-71 lead heading to the final 12 minutes of the season.

Game 6 could have shaken the Spurs, who were so close to holding the trophy that officials were preparing the championship presentation before Miami's rally. The Spurs held a team dinner late that night, figuring the company was better than having to dwell on the defeat alone in their rooms.

The pain of that game or the pressure of this one had little effect on their veterans but brought out a change in their leader, the subject of some rare second-guessing for his rotations near the end of the collapse.

The famously blunt Popovich was in a chatty mood pregame, actually preferring to stay and talk even when there were no more questions, saying the busier he was, the less he'd worry.

"It's torture," he said earlier of Game 7s. "It's hard to appreciate or enjoy torture."

But it sure was beautiful to watch.

The sport's most pressure-packed game had a nervous start, each team making just seven baskets in the first quarter and combining for seven turnovers. The Spurs took an early seven-point lead, but a pair of 3-pointers by Battier during an 8-0 run helped Miami take an 18-16 lead.

The Heat nursed a narrow lead for most of the second quarter, and after San Antonio went ahead in the final minute of the period, James tipped in a miss before Wade knocked down a jumper with 0.8 seconds left to send the Heat to the locker room with a 46-44 edge.