What Kanye has in common with Bret Easton Ellis 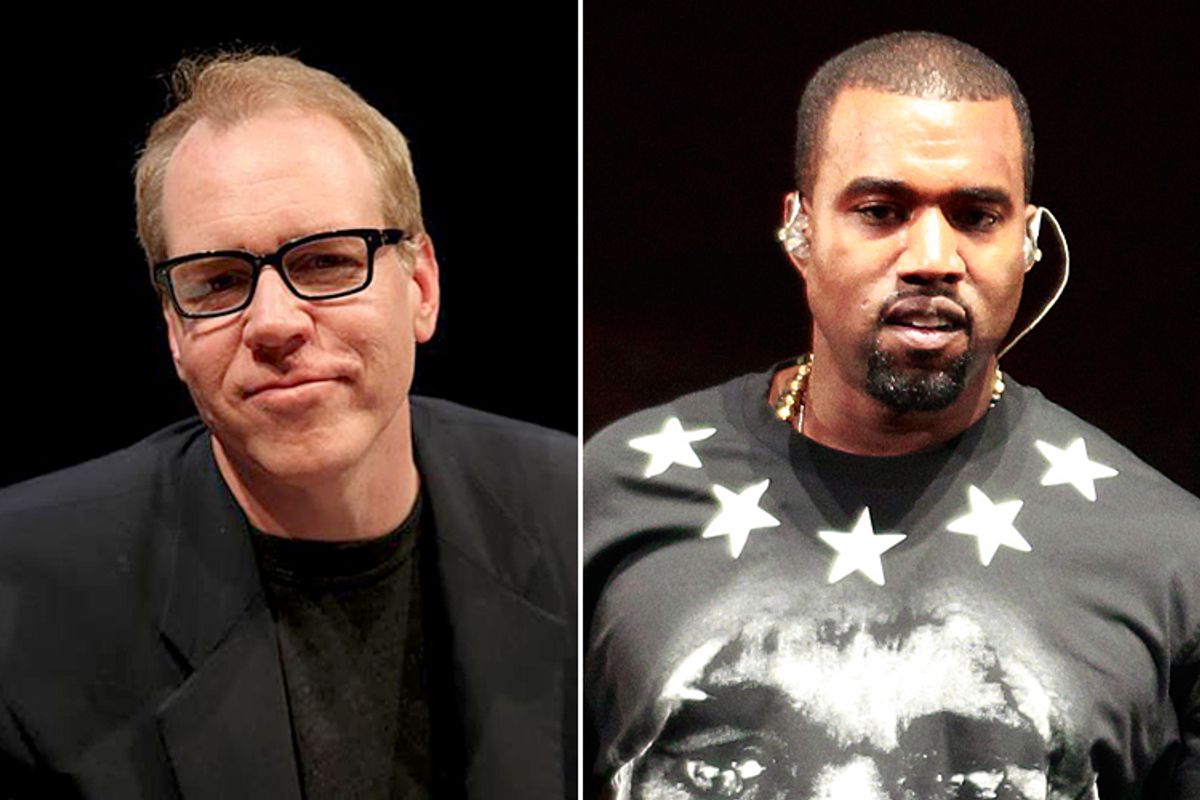 Rap's often cross-pollinated with literature or film -- it would take weeks to chronicle all of the references in hip-hop to Armitage Trail's "Scarface," via Al Capone, via Al Pacino. But Kanye West's new "American Psycho" short film might be the most post-postmodern crossover yet, featuring Scott Disick as homicidal yuppie Patrick Bateman, and allowing him to chop apart Kim Kardashian's best friend Jonathan Cheban in some kind of Freudian passion play. Chatter about the rapper's adventurous new album, "Yeezus," is at a fever pitch, and since his mesmerizing interview in the New York Times, some have been making the direct connection between the public persona of Kanye West, and that of novelist Bret Easton Ellis. Parallels can certainly be made particularly since Ellis wrote the initial treatment for the "Yeezus" clip: Both are impressive chroniclers of their generational predicaments. Both are prone to outlandish statements and to strong opinions (sometimes these things are separate). Both enjoy music in the "new wave" genre. And they would probably have a lot to talk about in the love department. (Seriously, where is their Interview interview? And will it include quotes from the baby?)

But their most interesting common trait is the way they each play with reality, character and authenticity — and how much the worlds of fiction and hip-hop actually have in common. In "American Psycho," one of Bateman's most chilling monologues is about his internal morality vis-à-vis what he projects to the world. "There is an idea of Patrick Bateman; some kind of abstraction," writes Ellis. "But there is no real me: only an entity, something illusory. And though I can hide my cold gaze, and you can shake my hand and feel flesh gripping yours and maybe you can even sense our lifestyles are probably comparable ... I simply am not there."

Last month, rap writer Jeff Weiss posited in a tweet: "Music inspires the weirdest obsessions with authenticity. Philip Roth was never like "yo, son, I'm bringing real novels back." He may have been referring to the line on Kanye's "I Am a God" in which he defends himself against those who disbelieved in the innovation of his movement: "Ol' niggas mentally still in high school/ Since the tight jeans they ain't never liked you/ Pink-ass Polos with a fuckin' backpack/ But errybody know you brought real rap back." Kanye, in turn, was referring to the type of critic who believes the one true hip-hop is something between 1980s rap battles and 1990s boom-bap, and that anything divergent from multisyllabic cadences and edutainment is a fraud (thus disdaining close to 100 percent of mainstream rap today, word to Kendrick Lamar). Whether such critics still exist, or whether Kanye's just setting up a straw man, is a question for another day.

But authenticity — whether you are who your art says you are — can be as important (and as slippery) in literature as it is in hip-hop. Even among novelists, whose artworks are supposedly fictional, who they are as people factors into how their work is perceived, making the line between rap persona and writerly persona indistinguishable. Perhaps we should be afraid that Bret Easton Ellis confessed in his Reddit AMA last month that the inner monologues of Patrick Bateman were birthed from the zygote of Ellis' feelings: "Patrick's rants are about wanting to fit into a society that he doesn't believe in. That's where I was, too. At the time. So a lot of the rants came from my frustration as well. Not a lot of research into that," he wrote.

It boils down to realness, often tied inextricably to chest-puffery and male hubris. You can write a novel about wood-chopping, but it's somehow seen as more reliable — more authentic — if you yourself are a wood-chopper. Ernest Hemingway wrote some of our most beloved works of fiction, but perhaps more beloved and enduring is how his personal biography corresponded to said works, misogyny and suicide be damned. It's an American myth straight out of Teddy Roosevelt's playbook: rugged, outdoorsy war hero fights bulls, hunts grizzlies, sails a freaking boat to Bimini all the while boozing it up and seducing women across the world. Compare this hallowed, perfectly masculine visage to that of Jay-Z, who at 43 often invokes his early '90s in the Marcy Projects as a drug pusher, yet has parlayed his street business skills to hustling in the boardroom (most recently announcing that his next album, "Magna Carta Holy Grail," will be released early next month via Samsung, which has already purchased 1 million copies at $5 a pop). His own American myth, or American gangster, is redolent with late 20th century Roosevelt imagery — along with observations and revelations about that very predicament that parallel those of Richard Wright. Yet his apparent by-the-bootstraps success is perpetuated even more by his fans. Manifest destiny is why so many aging white people love Jay-Z — they love to see his success, while letting the beats carry away the seamier lyrics about what he had to do to get there. He didn't executive produce Baz Luhrmann's "Great Gatsby" soundtrack for nothing. Next time you're at a Nets game, and the person sitting next to you raps along, "I used to move snowflakes by the O-Z/ even back then they could call me/ CEO of the R-O-C," ask them if they know what it means.

Authenticity comes into play in rap especially because of its supposed truthfulness -- Chuck D infamously called it "the CNN of the streets." As corporations became more heavily involved in hip-hop, fans became more skeptical about whether 50 Cent really was running the streets, whether Clipse really were pushing weight and, even now, whether Trinidad James really is doing all that molly. The semi-undoing of this quality came in 2008, when the Smoking Gun revealed that rapper Rick Ross was not, in fact, a Miami cocaine kingpin to whom Manuel Noriega owed many favors, but rather William Leonard Roberts II, who had spent a year and a half in the 1990s working as a correctional officer in a Florida penitentiary. This was a transgression of the gravest sort, and for many years he was referred to mockingly as Officer Ricky. But then something odd happened: His career skyrocketed. Officer Ricky was now the don dada of Maybach Music, considered one of the best rappers around, authenticity be damned. This is, after all, art, simply a work of fiction.

James Frey suffered a similar downfall in 2006, when it was revealed (again, by the Smoking Gun)  that the addiction and arrest in his memoir "A Million Little Pieces" were greatly exaggerated. The book  was nearly relegated to the fiction shelf, and Frey was forced to apologize for fronting like his experience was "tougher and more daring and more aggressive than I was." His latest works, however, have been less successful than Rick Ross'. So maybe readers are actually more concerned with authenticity than rap fans are (or maybe it's just that books don't get played on MTV).

Meanwhile, some novelists write entire works in hybrid first and third person -- Paul Auster's "New York Trilogy," or Sheila Heti's "How Should a Person Be." These recall the blur between art and real life that hip-hop perfected decades ago. And while many currently value the work of the rapper Riff Raff yet wonder whether his white-boy transgressions verge into black caricature, there are books like Jonathan Lethem's "Fortress of Solitude" — based in part on his upbringing in Gowanus, Brooklyn — that remind us the discussions of appropriation, aspiration, mimicry and authenticity in rap have been with us since the first-ever white boy tossed a Spaldeen across Dean Street. As the arty white parents of "Fortress's" Dylan Ebdus move in to gentrify a vaguely rough neighborhood in the '70s, he becomes the petri dish for racial tension, getting a daily shakedown but befriending Mingus Rude, a black kid who teaches him about hip-hop. Jonathan Lethem still lives on Dean Street, and his book seems to tell us you can gentrify not just a neighborhood but a mind and a soul too. As Thomas Pynchon's line from "Mason & Dixon" goes, "Who claims Truth, Truth abandons."

But if you're looking for the nexus of authenticity in fiction and hip-hop, the place where realness in both art forms converge, you have to go back to the Bronx, where hip-hop took its first breaths in the 1970s, not long after novelist Richard Price got his diploma from Bronx Science. So much of that author's acclaimed works draw from experiences he had growing up, including his debut novel (and, later, movie) "The Wanderers," about a gang of kids in the projects. He also wrote several important teleplays for "The Wire," lauded for its own realism, sometimes even casting the former gangstas and dealers upon whom the fictional-ish plots were based. Still, Price's most important contribution to the culture of hip-hop was "Clockers," later adapted into a movie by Spike Lee. Price never sold drugs, but the book reads like a low-level drug dealer procedural, the ins and outs of hand-to-hands and bloodletting on the clock, debilitated park as cubicle. Set in the projects of a tri-state town just like Jersey City, where Price spent time researching his book, Lee moved it to Brooklyn (write what you know; he also cast Onyx's Fredro Starr and Sticky Fingaz as local drug dealers). The soundtrack features a profoundly mournful, jazz-pumped song by the Crooklyn Dodgers, "Return of the Crooklyn Dodgers," that puts the faux-realism smack-talk to shame, setting institutionalized racism in its cross hairs. "Now clock, kids, who got the cocaine? Don't tell me it's the little kids on Soul Train," rapper Chubb Rock opens the song. "It comes from other places, not the tinted faces." Ultimately, the havoc drugs wreak and who's responsible for that may be more important than who's spent the most time selling them.

It's interesting that when rap authenticity is invoked, it's almost always directly connected to the hustler's lifestyle, but lyrics describing drugs' toll are often the sincerest. And in both rap and fiction, all the machismo and posturing cease to matter when an artist can speak with truth and clarity. Take this verse from one of Kanye's weightiest songs, the pre-Ellis track "Crack Music," for which he needs nothing resembling a street résumé: "Crack raised the murder rate in DC and Maryland/ We invested in that it's like we got Merrill-Lynched/ And we been hangin from the same tree ever since." Now that's too real.