"Naked and Afraid" producer: "We didn’t develop the show to be exploitative, ever" 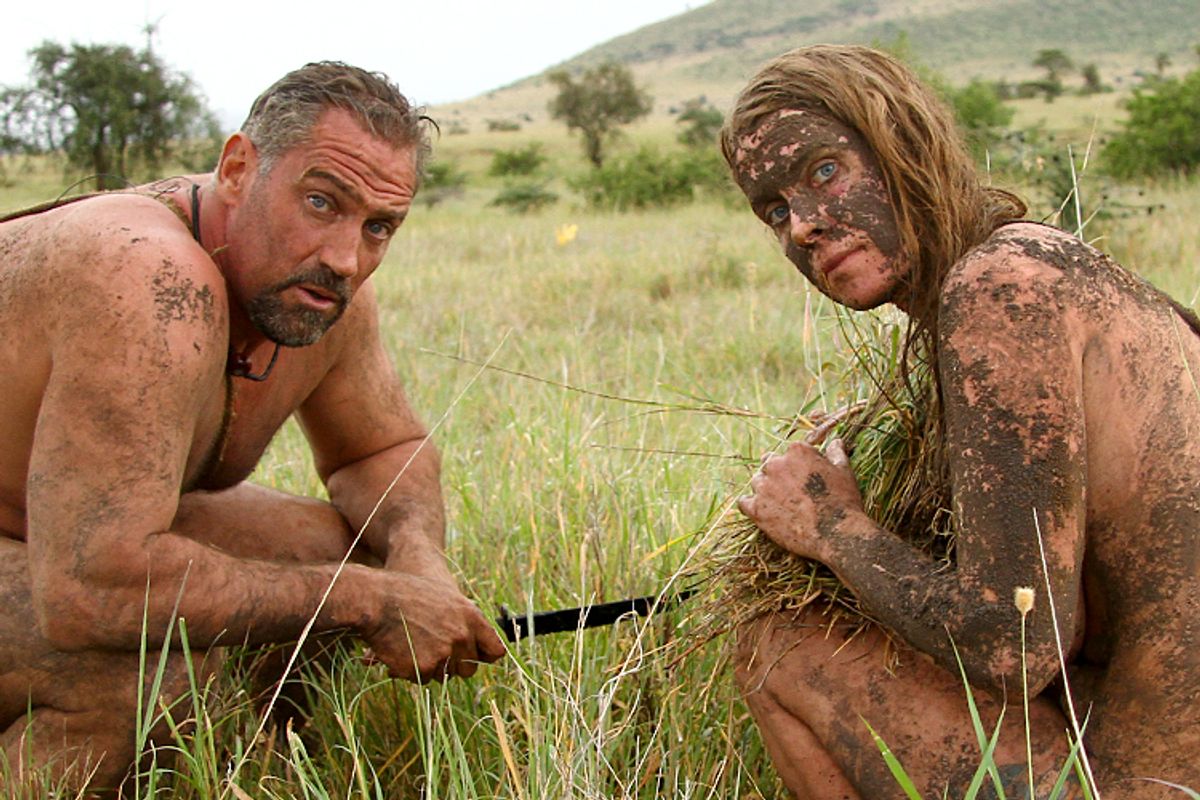 "Naked and Afraid," Discovery's new reality show premiering Friday, follows two different people each week as they are deposited in a taxing, remote wilderness environment where they have to survive for three weeks without food, water, shelter or clothes. When the first clips of "Naked and Afraid" hit the internet, the show got a lot of attention, as shows with naked people tend to do. It seemed like the latest series to push the bad taste envelope: "Survivor," but nakeder.

But the show is more serious-minded than that; the body parts are blurred out and the participants are so busy with the daily tasks of surviving there is no hanky panky or embarrassment at all. The title promises a titillation the show doesn't even try to deliver on, while doing what good titles should do: bring the show attention. On the occasion of the series' premiere, I spoke with Denise Contis, an executive producer on "Naked and Afraid" and a senior vice president at Discovery (so someone who knows to be careful when she speaks) about why "Naked and Afraid" needed to have nudity at all, whether it's exploitative and how, even for a show that's intended to be an "authentic" survival experience (if a reality show could even be such a thing), "Naked and Afraid" was the perfect title.

Watching "Naked and Afraid," it seems like there’s clearly a survival show in there that wouldn’t necessarily require the participants to be nude. Why make that part of it?

I think what we were always looking to do with the producers was develop the ultimate survival show, and a survival show where our cast of survivalists really had to rely on their body and their brain. What’s the quintessential survival show that allows for that? So really it was just looking and developing that and this is where we went with it.

So the nudity came up as you guys were going along; it wasn't there from the beginning?

You were thinking, “Let’s think about how to make this as difficult as possible.”

Not even so much difficult, but as authentic and pure a survival experience as we could.

I just saw one episode, in Costa Rica, but at around day 10 they haven’t eaten enough and it’s been raining and they are just really, really cold and really, really hungry and very lethargic and it struck me that this is actually kind of hard to make an exciting show out of. Was the editing problematic for you guys at all?

The location really informed the creative, so that every episode you see is going to be two different people and a different location, and the location that you see is really a character. In some locations, they’ll find water in three days. In other locations it got past two weeks. We have another episode coming up, and they have no shoes on, and the ground was full of burrs, and they try to come up with makeshift shoes. They did, they’d last maybe a few hours, but they simply could not travel, so really the bulk of the episode happened easily within maybe a half-mile radius. Another episode, they got very creative in coming up with shoes and were able to branch off, and sometimes they could swim to another, smaller island. So it really depends on what their location is as far as how much ground they could actually cover.

Did you ever consider giving them shoes, or some other object that might help?

Yeah, we did have a lot of hearty conversations in development of how do we protect the purity and authenticity of the experience but still help them move from point A to point B, and where we always landed was, we really want to protect the authenticity, as did the participants. We were surprised by the large amount of people who wanted to participate during the casting process, and what drew them all to the experience was that it was authentic and a real test of the training or skill set they had worked so hard on.

Did any of the contestants balk at the nudity?

No, they really embraced the really kind of authentic, pure nature of the survival aspect of the show, and what we all found really interesting was, once they hit the ground, once they’re on location, within minutes, it’s irrelevant to them that they were naked, completely irrelevant, not a plot point. They were in survival mode. Their focus quickly shifted: I need to get food, I need to get water, I need to get shelter.

Well, look, we hope, truly, with every single show we do that viewers have a curiosity about it, that it’s intriguing, that it fuels curiosity, that people are drawn in.

It was really different than I expected. It seems really grueling. The promise of the nakedness is almost distracting from what the thing is, like “they’re sending them into the wild with no clothes on!” when that's not the tone at all.

What did you expect it to be?

A crazy reality show where everyone has to be naked and in the jungle. Did you want audiences to expect that?

I think, potentially, viewers who watch from home in their living rooms, their real-world experience as they’re watching the show is so completely opposite to what the survivalists are going through, that for the viewers who start to watch the show, they’re probably thinking, “oh my god they’ve got to survive. They’re naked, that’s a big plot point.” But I think as you probably saw as you watched the show, once the people hit the ground, it’s irrelevant. At its core, it is the quintessential survival show, where they really have to rely on their body and their brain to survive, and potentially thrive.

But it’s a selling point of the show. It’s in the title.

Well, we didn’t develop the show to be exploitative, ever. We always developed it with our filter being “how do we protect and it make it a pure survival experience?” And to your original question, could we have given them shoes? Yeah. And try to remember, too, each person can bring one item. I mean it’s interesting the items they bring. One person brought goggles, which I find fascinating, because he knew he was going to be by the ocean. Another person, very wisely, brought a very small cup, because they knew they had to boil water. One person brought a machete. What’s interesting is, nobody brought clothes. Nobody brought shoes.

It wasn’t that important to them.

No, because they’re in survival mode. So I think what the viewer brings to it is how they imagine they would be in that situation, but for these survivalists, it is survival mode. And for 21 days, which is a lengthy period compared to all the other survival shows.

How did you name the show?

It was just a title. We have an internal sort of titling process, and we throw out a bunch of titles, for every show we do, and this was one that just kind of popped through and it really captured the essence of what the show is and could be.