A slim, invigorating new book offers fresh ways to look at the most famous work in Western literature 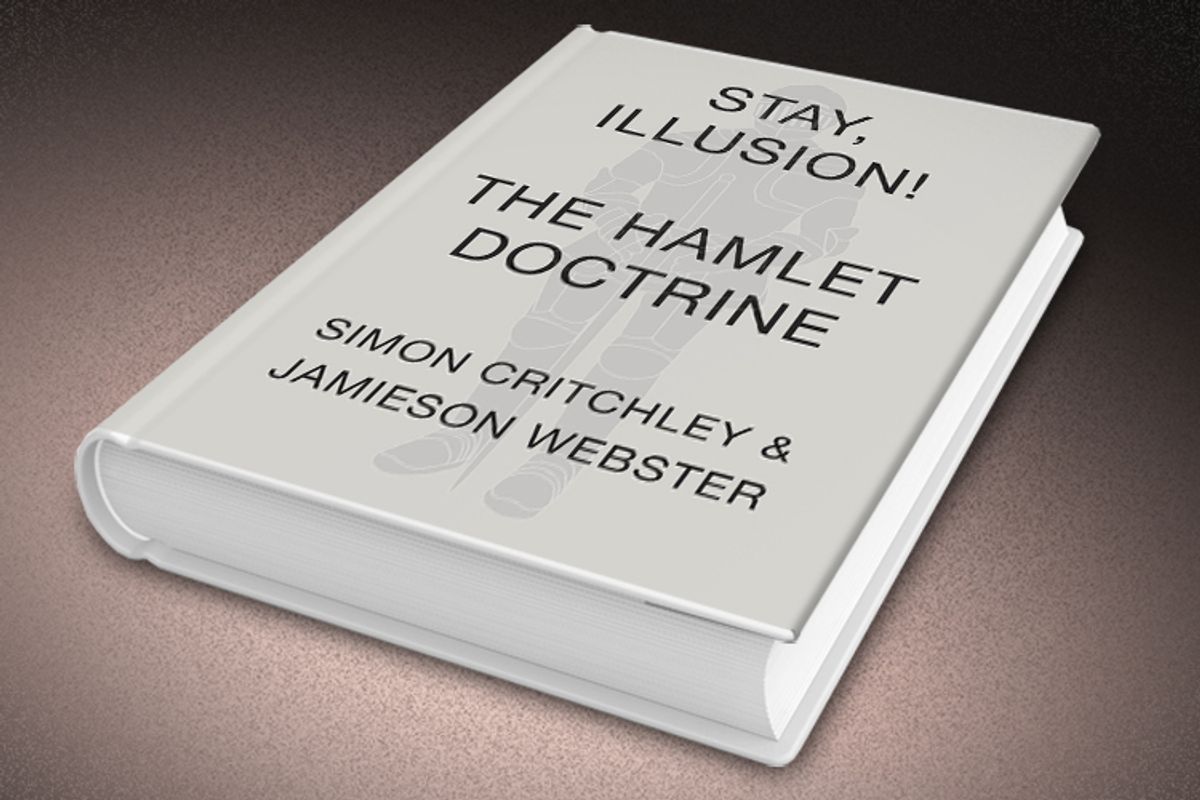 Theories about Shakespeare are numberless, ranging from the idealistic to the admittedly speculative to the daft. What is it about this multifarious artist -- celebrated by Keats as "capable of being in uncertainties, mysteries, doubts, without any irritable reaching after fact and reason" -- that makes his admirers want to nail him to the wall, reducing his genius to some primary cause or motivation or identity?

"Hamlet" is the play that really brings out this urge, given that its title character is mysteriously inhibited from doing the thing that he regards as his greatest responsibility. Why doesn't the prince kill his uncle, when he believes (or does he?) that Claudius has killed his father? Why does he instead dither and rave and philosophize and brood and berate both his (innocent) girlfriend and his (culpable?) mother? How does he manage to kill someone else's father and engineer the deaths of two of his uncle's hirelings without getting around to the main event until the very last minute, when his own life is forfeit?

The fact that these questions are terminally unanswerable might be one of the best qualities of "Hamlet," which is why a book like "Stay, Illusion!: The Hamlet Doctrine" by Simon Critchley and Jamieson Webster is such a treat. The authors -- a philosophy professor and a psychoanalyst who are married to each other -- claim no special expertise and argue no ironclad theory. They investigate, speculate and propose. "We are outsiders to the world of Shakespeare criticism," they write, and the thinkers they have chosen to respond to (Carl Schmitt, Walter Benjamin, Hegel, Freud, Jacques Lacan and Nietzsche) are (arguably) peripheral to the field as well. The result is a slim volume on "Hamlet" that this reader found more invigorating than many a more rigorous work. All you need to engage with it is a modest acquaintance with the play and an open mind. Each of the short chapters in "Stay, Illusion!" is a springy diving board poised over a deep pool of thought. Find one you like the looks of, bounce a bit, then plunge in.

Lately "King Lear" seems to have edged it out, but "Hamlet" was the Shakespearean play par excellence during the mid-20th century, that heyday of existential and Freudian theorizing. As a result, much of the more familiar criticism of the play has a claustrophobic quality, concerned not just with conflict internal to the self but also with what used to be called the alienation of modern man. "Hamlet" is about a callow person, which makes it easy to limit one's view of the play to its depiction of youthful self-regard. For that reason, perhaps, some of the most refreshing chapters in "Stay, Illusion!" have to do with the political world depicted in the play, particularly as viewed by "the infamous German jurist," Carl Schmitt.

Schmitt is controversial for "his involvement with the National Socialist regime and his apologia for dictatorship and political authoritarianism," according to the authors. This, however, makes his rumination on "Hamlet" acutely relevant; as Critchley and Webster point out, "'Hamlet' is arguably the drama of surveillance in a police state, rather like the Elizabethan police state of England in the late 16th century or the multitude of surveillance cameras that track citizens as they cross London" today. Many readers of the play (this one included) become so focused on the struggles within Hamlet's psyche and family that they fail to notice that "everyone is being watched in 'Hamlet,' and everyone lives in fear because they know they are being watched." Furthermore, there's the external threat of the ongoing border conflict with Norway. So, "Elsinore is a world of spies, a world of utter political mistrust in a corrupt and murderous regime defined by the constant threat of war."

For Benjamin, Hamlet is a figure whose collision with a brutal reality (the loss of his father) forces upon him the revelation that he lives in a world "absent of radiance, deprived of soul." This has precipitated the prince's "acedia," an old religious term for a depressed, withdrawn state. For his part, Hegel -- "the philosopher of the tragic," according to the authors -- sees tragedy as "the aesthetic articulation of the disintegration of ethical life." But while classical tragedy depicts "opposed but equally justified characters," like Creon and Antigone in Sophocles' "Antigone," the conflict for a modern tragic hero like Hamlet is internal and subjective. Freud, of course, formulated his theory of the Oedipus complex while working on "Hamlet," and saw the prince's inhibitions as arising from the recognition that he, too, wanted to kill his father and marry his mother.

The least felicitous chapters in "Stay, Illusion!" explore Lacan's interpretations of the play. Here, the thoughts are convoluted, often opaque and full of switchbacks with a preening regard for their own cleverness. Getting though some of these sentences is like trekking across a titanic sponge; no sooner have you fetched a mighty step out of one declivity than you find yourself deeply sunk in another and despairing of any way forward. But that's Lacan, and for all his affectations, he has insights to offer, such as the idea, as expressed by the authors, that "the violence of Hamlet is the violence of failed mourning" or that Hamlet treats Ophelia's brother, Laertes, so erratically because he unconsciously views him as a double for himself.

Meanwhile, Nietzsche is off on his own somewhere, proclaiming Brutus (from "Julius Caesar") the supreme Shakespearean tragic hero. Yet he supplied this book with its subtitle, after a concept that the authors characterize as "turning on the dialectic of knowledge and action." As Nietzsche sees it, Hamlet is not indecisive, but enlightened, if darkly so. Hamlet possesses (thanks to the revelations of his father's ghost) the ultimate insight into the nature of things, and knowing what he knows, he also knows that action is pointless: "It is either laughable or humiliating that someone like Hamlet should be asked to put right a world that is out of joint."

In other words, Critchley and Webster write, "Action is only possible where there is illusion, a proposition that would make any of us, believers in science and objective reality that we like to be, deeply uncomfortable." This is a lot like the condition Yeats lamented in his apocalyptic poem "The Second Coming" -- "The best lack all conviction, while the worst/Are full of passionate intensity" -- if by "the best" we mean those with the greatest understanding of the real world.

All this is beginning to sound like the alienation of modern man once more, but Critchley and Webster conclude on a surprisingly upbeat note. (A move that would have pleased Hegel -- who, the authors explain, did so like a happy ending.) Their contribution to the conversation is a case made for Ophelia as the "true tragic hero" of "Hamlet," the only character in the play who remains capable of love and committed to a desire that pierces the "narcissistic shell" that encloses everyone else's heart.

It's true that the gloomy fortress of "Hamlet" is filled with single rooms, and residents who prefer to stay in them. By contrast, Critchley and Webster write, "To love is to give what one does not have and to receive that over which one has no power. To love is to freely negate the stubbornness that is the self and to live in loyalty to an affirmation that can dissolve like morning mist with the first experience of betrayal." A funny valentine indeed on which to end a book about that most solitary of figures, the melancholy Dane. But as impossible and illusory as it is, it works.