Jim Carrey takes a stand against violence in "Kick-Ass 2"

The actor, who's been outspoken about gun violence in recent months, says he "can't support" the movie's bloodshed 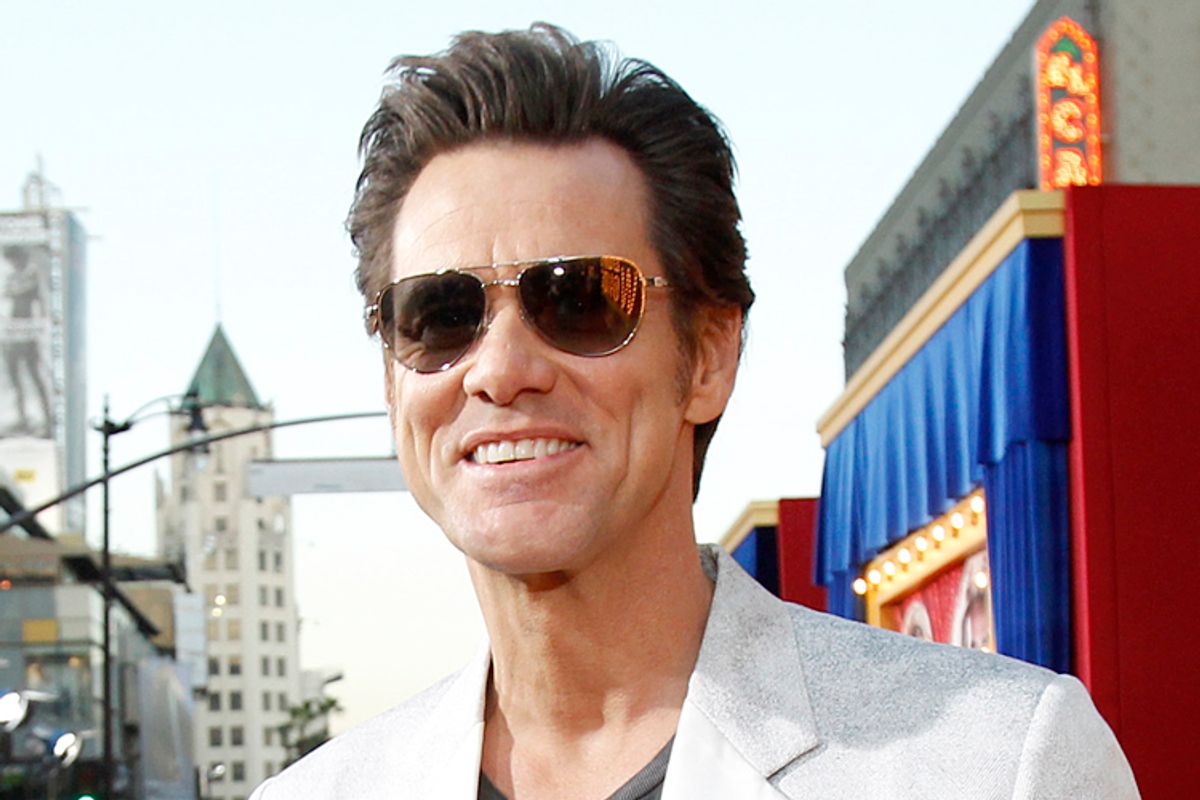 A cartoony summer action movie may not, on the surface, seem to have much to do with a December tragedy. But in a rare case of an actor backing away from an opportunity to self-promote, Jim Carrey took to Twitter Sunday to explain why he's backing off from the new "Kick-Ass 2," in which he plays the bat-wielding Colonel Stars and Stripes. "I did Kickass a month b4 Sandy Hook and now in all good conscience I cannot support that level of violence," he wrote. "My apologies… to others involve [sic] with the film. I am not ashamed of it but recent events have caused a change in my heart."

Carrey has in recent months become increasingly outspoken about gun violence. In March, he played both a clenched Charlton Heston and a suave country and western singer crooning the anti-gun anthem "Cold Dead Hand" for Funny Or Die. Sample lyric: "Only the devil's true devotees could profiteer from pain and fear." It quickly became one of the most viewed clips in the site's history, and led to a predictable amount of frothing from fans and in conservative outlets like Fox News. In response, Carrey described the network as a "media colostomy bag that has begun to burst at the seams."

Then in April, Carrey clarified his position on guns with an Op-Ed for Huffington Post called "I Never Wanted to Take Your Guns Away." In it, he defended his own armed bodyguards, saying, "Every American has the right to bear arms. But it is up to every American to draw the line when it comes to the type of guns that are considered a reasonable means of self-defense."

But while it can be a risky career move to make a video lampooning gun nuts, it's a far bigger gamble to back off from a potential blockbuster. The "Kick-Ass" comic creator and the film's executive producer, Mark Millar, took to his blog Sunday evening to respond, saying, "I respect both [Carrey's] politics and his opinion, but I'm baffled by this sudden announcement as nothing seen in this picture wasn't in the screenplay eighteen months ago. Yes, the body-count is very high, but a movie called Kick-Ass 2 really has to do what it says on the tin." He adds, "Like Jim, I'm horrified by real-life violence (even though I'm Scottish), but Kick-Ass 2 isn't a documentary…. Ironically, Jim's character in Kick-Ass 2 is a Born-Again Christian and the big deal we made of the fact that he refuses to fire a gun is something he told us attracted him to the role in the first place."

Carrey could easily have gone through the motions of flogging his new movie, but he took the unique step, in a world of neatly divided battle lines and easy sound bites, of admitting an evolving conscience and a change of perspective. It's hard to say, "I used to feel OK about this, but now I don't." It invites scathing criticism from both sides of the debate. And though it's not every day we get to watch a Canadian and a Scot work through their ideas about American gun culture in public, Carrey's admission of his crisis of conscience – and Millar's thoughtful rebuttal – are a welcome contribution to the national conversation. They show our simultaneous fascination with and horror of bloodshed; they invite us to examine the morality of violence as entertainment. They offer no simple solutions to complex issues. But they both demonstrate, in their differing ways, an honesty and integrity that truly kicks ass.