Snowden won't find a beacon of civil rights in Ecuador

Does he risk losing goodwill by allying with a president known for his "widespread repression" of the media? 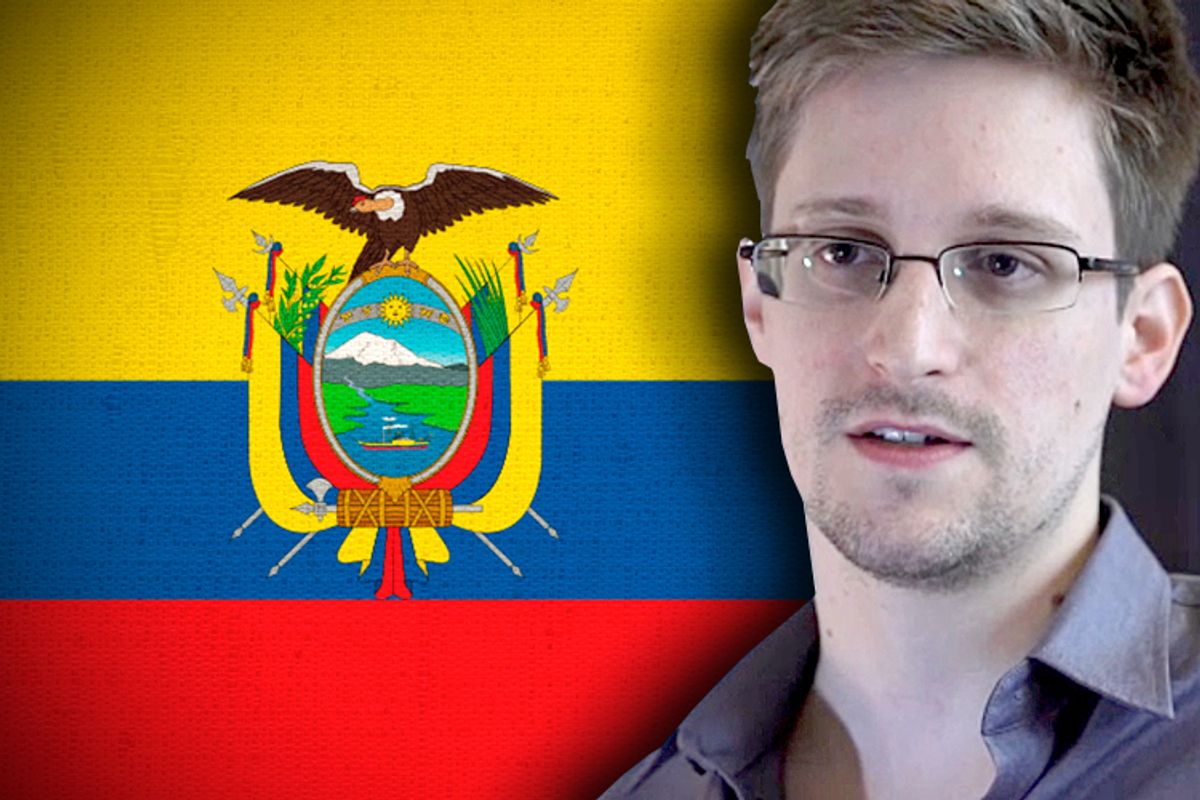 Alliances of convenience with unsavory governments are nothing new in international politics, but they would seem to be the kind of moral relativism that recently teamed-up Edward Snowden and Julian Assange might revile -- so it's worth digging a bit deeper into the much-discussed irony about the two idealists taking refuge under the wings of Ecuadorean President Rafael Correa. Assange told reporters today that NSA leaker Snowden is en route to Ecuador, while the WikiLeaks founder himself has been holed up in Ecuador's embassy in London for months.

The two say they are motivated by a desire to expose human rights and civil liberties violations by the American government, but allying with Correa is like jumping out of the frying pan and into the fire. Many have cursorily noted that Ecuador has a poor record when it comes to freedom of the press, but a closer inspection is even more troubling.

Since not long after taking office in 2007, Correa has led a systematic campaign against critical journalists in his country -- human rights activists say -- using litigation, legislation and intimidation against against media figures who criticize his administration. Just two weeks ago, the country's legislature passed a sweeping new law, backed by Correa, that will "seriously affect the freedom of the press and freedom of expression," according to the U.N.'s Special Rapporteur for the Promotion and Protection of Freedom of Expression

The law lets the government decide what is "truthful" information, and threatens criminal sanctions against journalists for "undermining the prestige" of people or groups. Journalists and human rights activists say the law will give the government new powers to crack down on political enemies. It even allows authorities to order media outlets to issue public apologies for their reporting.

“This law is yet another effort by President Correa to go after the independent media,” said Human Rights Watch Americas director José Miguel Vivanco. “The provisions for censorship and criminal prosecutions of journalists are clear attempts to silence criticism.”

Monica Almeida, an editor of the daily El Universo newspaper, which is often critical of Correa, called the law "completely crazy," saying it is "designed to regulate everything we do."

But it's just the latest in what the Committee to Protect Journalists has called "widespread repression of the media" from the Correa administration.

For instance, in the first six months of 2012 alone, the state broadcasting authority closed 20 private radio and television outlets, some without proper legal process. Or take the case where, in 2011, a newsmagazine anchor criticized the administration's heavy hand in dealing with a dissident. The very next day, the administration ordered the TV network to preempt the anchor's broadcast with a 10-minute-long "harsh and personal rebuttal from a government spokesman."

In January of last year, the president introduced legislation that prohibits the media from disseminating "messages" or “reporting” that would detract from the “political thesis” or candidate for office. The determination of what violates the law would be made by an office controlled by Correa's party, naturally.

And Correa himself has never refrained from personally shaming and attacking adversarial journalists, especially on his weekly broadcast, which networks are required to transmit. He's thrown around terms like "treason," and called the media “ignorant,” "misbehaving" “liars." The president regularly says that the press is his “biggest enemy,” according to the State Department, which notes that his administration often uses "legal mechanisms such as libel laws and administrative regulations to suppress freedom of the press."

Beyond press freedom, Correa made big promises on the rights of indigenous people, but has cracked down harshly on their protests, according to Amnesty International, undermining the freedom to assemble. A U.N. Special Rapporteur has also expressed concern about impunity in cases of extralegal killings and abuses by police.

And especially ironically, Correa has recently made it more difficult for refugees to seek asylum. Ecuador has the largest number of refugees in the region (mostly from armed conflict in Colombia), but in late May, Correa issued a presidential directive that imposes new restrictions on the rights of refugees.

Snowden should be judged based on what he did, not which country he ends up in. But whatever political power he has or had came from a notion that he gave up everything in pursuit of higher ideal. At best, allying with Correa makes him look like an opportunist. At worst it suggests that he's not really motivated by idealism but by a vendetta against the U.S. government and a reflexive desire to embarrass it. The common ground between Correa and Snowden, after all, is an adversarial position to the U.S.

At first, Snowden seemed more thoughtful and principled than Assange, but in allying with Correa, it's hard not to see a double standard or a tacit endorsement (Assange has spoken pretty favorably of the president) of a regime that presumably stands for everything they oppose.