After spending all season repeating himself, Don Draper finally makes a change 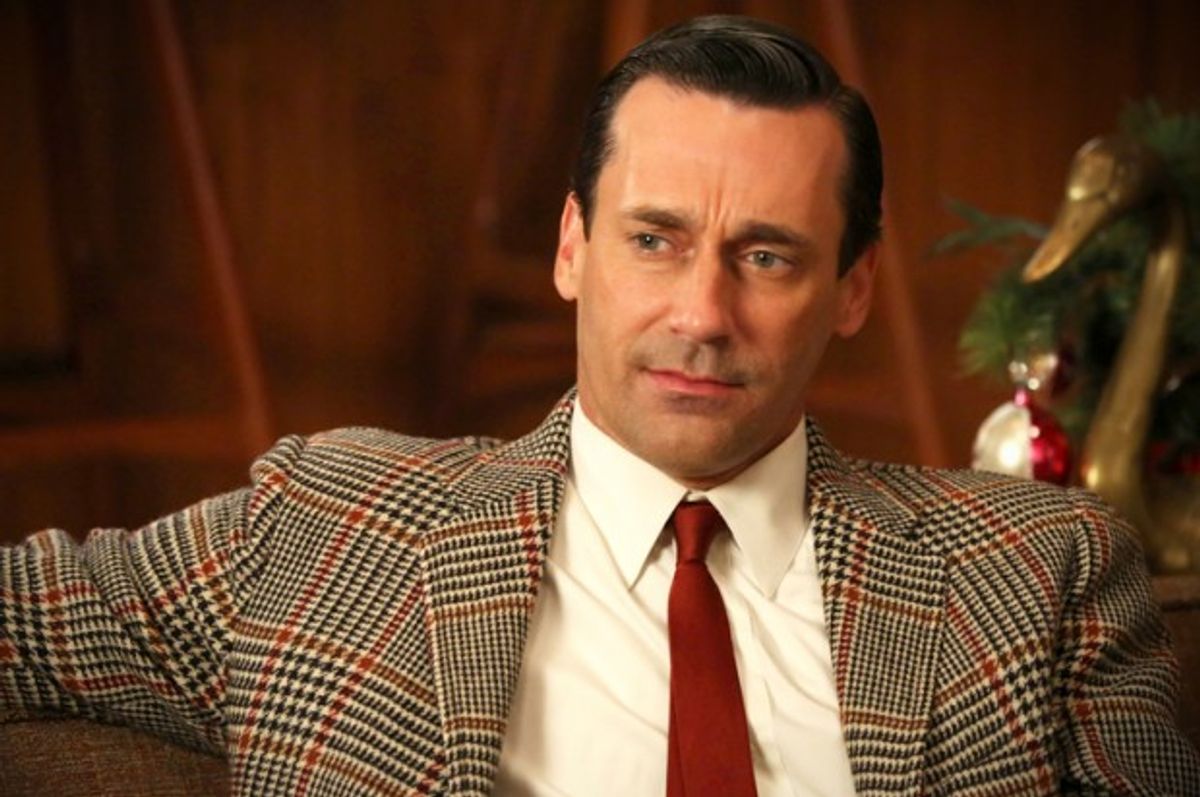 This season of “Mad Men” made 1968 palpable. It filled viewers with a tremendous sense of uneasy mood, made us paranoid, encouraged us to expect the worst, and, most of all, had us awaiting some climactic, horrifying event — that never arrived, or at least not in the form we expected. 1968 was a year of extraordinary upheaval, but sitting here, more than four decades removed, we know what the people living through it could not: The revolution did not arrive. The center held. The chaos was, ultimately, bound. Sally Draper will be 26 years old in 1980: she is more likely to be a yuppie than a radical — though maybe a feminist too. Change comes, fast and fierce, but not fast or fierce enough to wash everything away. Not fast or fierce enough to wash away a man's past. When the huge, show-changing event the season had been leading up to finally arrived, it was all psychological, not physical. It was not menacing, it was promising. The heavy weight hanging over this season was not 1968, it was Don Draper, and now he's free — or freer than we've ever seen him.

Such was the power of the season's vibe that I watched the episode with a pit in my stomach, every funny line, every moment where no one died a kind of reprieve. When Pete got into that car he couldn't drive, I was expecting body parts, not comedy. This season turned fans into conspiracy theorists. People began to predict metaphysical, fantastical theories straight out of "Lost": Who was Bob Benson? Was Megan already dead? Would she be murdered like Sharon Tate? Was Ted’s plane a classic Chekhov’s gun? Physical and emotional violence were everywhere, foreshadowing something eerie, portents that never paid off. The assassinations of MLK and RFK, riots, the Democratic National Convention in Chicago, Ken was shot in the face, Peggy accidentally stabbed her boyfriend in the guts, a rat bled to death under her sofa, Roger's mother died and so did Frank Gleason, and Sally and Bobby lived through an unsettling home invasion. The signs were there: The show was headed somewhere violent, something would break, fall into the widening gyre. But the suicide, the death, the murder, the plane crash, they never happened — the one death in this episode, of Pete's mother, was largely played for laughs.

"Mad Men" has always been an internal drama, not "Lost." The world changes, but can these characters? Sideburns and drugs may be in the workplace, but the people haven't quite kept pace with the times, even if their style has. Change has been incremental, if real, everyone still beholden to their feelings and responsibilities, their past decisions. Joan lets Roger into her son's life, but not her own. Peggy may have the power desk chair and, soon, Don's office, but she doesn't have the power to decide what happens with Ted. ("Well aren’t you lucky to have decisions” is one of the great "Mad Men" lines.) Ted is holding on as hard as he can to his family and stability:  “I have to hold on to them or I’ll get lost in the chaos.” Pete, off to California, seems finally to realize what he has lost. Betty, finally reunited with her youthful beauty and sexual power, is better than she ever has been, finally, even, an almost consistently decent mother.

And then there is Don, who may have started the season reading Dante, but has been Sisyphus, condemned to repeat himself. For the first time, as the center of it all,  Don seemed like a liability this season: the most pathetic, dull part of the series, the man stuck as the worst version of himself.  His fresh new start with his second wife was no longer a fantasy, so he cheated more profanely than he ever had, with the wife of a friend; more creepily than he ever had — he kept Bobbie Barrett in a hotel room too, but not on quite the same power trip — more pathetically than he ever had, begging Sylvia not to end it; and more disastrously than he ever had before, ending his daughter's childhood. He’s been cruel to Peggy before, but never quite like he was last week, jealous and conniving, stripping credit from her rather than see her bonded to another man and mentor. He’s numbed out before, but never made an ad campaign that’s a suicide fantasy, never almost drowned in a pool, middle-aged and high.

In the finale, it seemed to be more of the same: Don's alcoholism has gotten to the point that he has the shakes and wakes up in a prison cell for punching a minister. It's months since Sally caught him sleeping with Sylvia, and he's made no reparations. Running away — something Don tried to do back as far as season 1, with Rachel Mencken – seems like his way out, and he wants to head off to California, to try to outpace whatever he is, a sweaty, anxious drunk, who steals his underlings' escape plans.

But then, sitting in the Hershey's pitch meeting, having just told a perfect Don Draper lie about a childhood so idyllic it could only exist in an ad, Don sees his shaking hands, and something finally snaps. I'm not sure that I quite buy the timing or the speed of this transformation, but I'm thankful for what it means about the final season— that it will be outside the cycle of repetition; and, of course, the office politics — and I do believe that Don is so desperate for a way to feel some other way, he would do even this, tell the truth. So Don, in the room, talks about growing up in a whorehouse, reading about orphans with a better life under the care of Hershey, dreaming he could go there. The candy bar "was the only sweet thing in my life," he says, before telling Hershey they shouldn't advertise at all. A self-immolation has never been more vivifying.

Don has tried everything to be different, to feel different, but the one thing he has never tried is to be himself — to be Dick Whitman.  His colleagues fire him, because to them, his Hershey speech seems like bad behavior from an uncontrolled, asshole alcoholic, but we know better, that Don, for the first time, is really trying something new. Megan is done with him, and the season ends with him taking his own children to see where he grew up, to see who he is, an honesty he's never shared before. Remember Sally saying after the home invasion that she realized she didn't know anything about her father? With the one look she gives him in the final scene, you can see how powerful his finally sharing really is.

This season of "Mad Men" made us anxious of some looming disaster, convincing us that something, something crazy, something epic, something terrible was coming. (A conviction shared by the millions of Americans in 1968 who voted Nixon into office on the promise that he could stave that change off: Again, "Mad Men" nailed the mood.)  But what "Mad Men" keeps telling us over and over is that the really scary thing is not coming, because it is already here. Don Draper, whatever name he uses, is stuck with himself, his flaws, his sins, his past, and there is no catastrophe, no con, no price that can release him from their hold. As long as we live, we will be ourselves. For Don Draper, for the very first time, that may not be a calamity.