If you're in withdrawal from season six, it's time to start thinking about how season seven will end (or should) 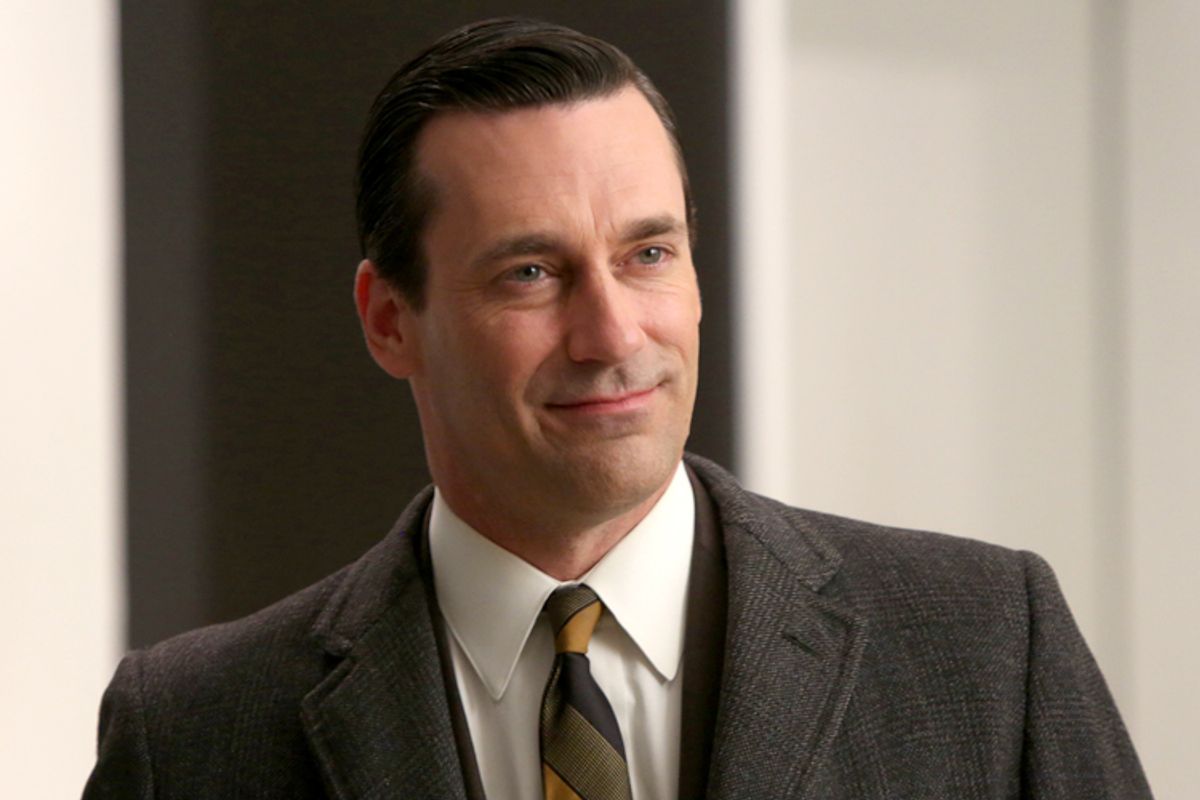 After all the speculation about "Mad Men," two deaths marked the end of season 6. The first was an example of pure Weinerian  irony: Pete’s mother fell (or was pushed) from the SS Sunset Princess into shark-infested waters. But Weiner also apparently knows his Aristotle — we begin in comedy and end in tragedy — and  we know that Weiner enjoys doubles: the main death here came in the second half of the show and was that of Don Draper's carefully constructed persona. Who is (or was) Don Draper? He’s Dick Whitman, and this season’s dark night of the soul ended in a most Jungian way with his confession and his journey to his childhood home, a house of prostitution.

Of course, each season finale has been like a little death for viewers, and discussions have already begun about the seventh season. Will Dick/Don redeem himself or least move on from the Inferno to Purgatorio? Will the company and show go bicoastal? Will Peggy ever make a wise dating choice? Here are some possibilities:

1. It’s 2014. A late-middle-aged Sally, played by Susan Sarandon, stands in the doorway of what is obviously a home office. The camera pans the room, ending with a manuscript on the desk. The cover says "Mad Men: A Memoir," by Sally Draper Bishop.

2. It’s 2014.  Bobby Draper, who is still five years old, is watching television. During a commercial for Life cereal, he idly picks up a snow globe, and the camera zooms in on the by-now iconic figure of the opening graphics falling inside a glittery snowstorm.

3. It’s 1969. A man named Dick Whitman shows up at a commune in Carmel, CA. When the head of the commune asks what Dick’s work experience is, he replies, “Farming.”

5. It’s 1999. Megan is still appearing in "To Have and To Hold." Her character Corinne is the matriarch of the show; Megan is also the head writer, and won an Emmy for her story arc about an advertising company and a set of good and evil twins named Dick and Don.

6. It’s 1969. Ted returns to New York and takes Peggy and Don for a ride in his plane. When they encounter a freak snow storm, Peggy and Don believe that they are going to die, but then they don’t.

7.It’s 1970. Don and Megan are still married; in fact, their marriage is better than ever. Don flies out to California to visit Megan several times a year; Megan doesn’t like it when Don calls her Anna, but she just keeps smiling.

8.It’s 1970. Don goes to a matinee showing of Five Easy Pieces and is inspired to write his first novel under the pen name of Dick Oates. Critics call it a brilliant blend of Joseph Heller meets John Cheever meets Flannery O’Connor.

9.It’s 2014. Pete is sulking on the veranda of his assisted living home. He has just discovered the marriage announcement, in The New York Times, of Peggy Olson Rizzo and Joan Holloway Harris.

10. It’s 1983. Pete and Kenny Cosgrove win the Oscar for Best Adapted Screenplay. Their source is an out-of-print novel called "Mad Men." In his acceptance speech, Pete says that it’s a shame that the author, Dick Oates, is dead. Dick/Don/Dick is not dead, however; he is down the street watching Monty Python’s "The Meaning of Life" under an assumed name.

11. It’s 1969. Don, who has been reinstated at SC&P, says, “I treasure you people,” and all the characters —including Carla, Miss Blakenship, and Sal Romano—join in a group hug, while Blood, Sweat & Tears sings “Spinning Wheel.”

12. It’s 1971, and all the characters, including the Rosens, Grandma Pauline, and Megan’s mother, gather for Thanksgiving dinner. Bob Benson, who is the head of Creative at SC&B, carves the turkey.

13. It’s 1953. Don wakes up in bed. He doesn’t recognize the woman lying next to him, but we do! It’s Betty! Don looks toward the door of the bedroom and sees a trail of clothing. Next to his suit jacket and tie is an empty whiskey bottle. He sits up, lights a Lucky Strike, and says, “I had the strangest dream. Was it good for you too?”

14. It’s 2014. Don wakes up in bed and sees a woman he doesn’t recognize. It’s Joan! Her son has brought her to the nursing home for a visit. Don asks, “What happened?”

15. So Don and Peggy and Roger and Joan walk into a bar.

Carolyn Foster Segal teaches creative writing at Muhlenberg College. Her writing has appeared in The Chronicle of Higher Education, Inside Higher Ed, The Huffington Post, and many other publications.