Why are we fascinated with overdressed kids? 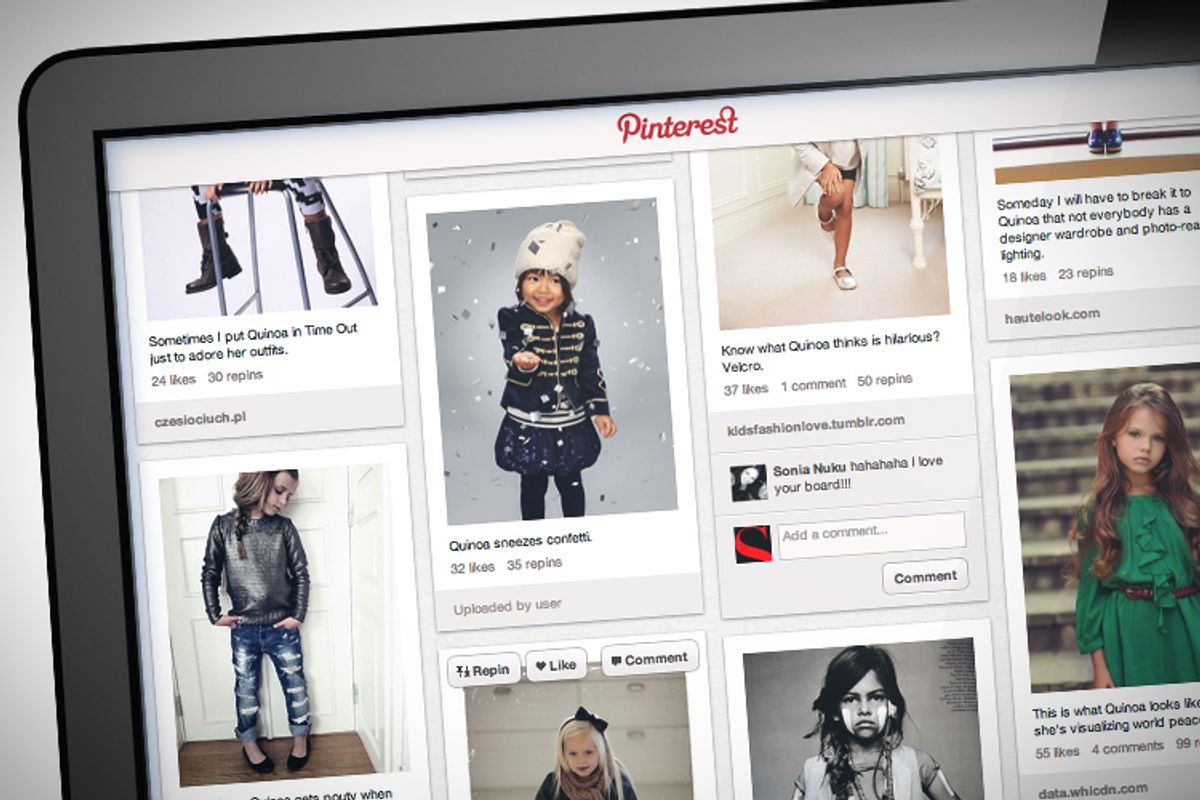 Suri and Shiloh are so 10 minutes ago. Plus they're both like, over the age of 5. Behold our new fashion icons, Alonso and Quinoa.

On Monday, the Cut profiled Alonso Mateo, the current bad boy of male fashion. Mateo is 5. Mateo has of late been dominating on Instagram thanks to his effortlessly cool fashion sense and his attendant grown-ups' liberal use of hashtags. Typical entry: "That's how you do it. #MateoStyle #fashion #mensfashion #kidsfashion #instafashion #instapic #kidsinstyle #fashionista #instastyle #coolestkid #handsome #boys #instacute #follow #followme #igdaily #swag #ootd #igers #shoutout #instacool #instaworld #lookbook #trendy #streetfashion #fashiondiaries." Mateo, whose look can be described as "young Steve McQueen – really, really young Steve McQueen," favors slouchy jackets, jeans and aviators. He likes expensive boots. He likes to mix things up – sometimes accessorizing with a jaunty scarf, sometimes with a plush car seat. In one photograph, he is seen chilling with a book on the floor of his closet, in front of a collection of shoes that would seem generous by Kardashian standards. Mateo has over 11,000 followers.

Of course, swag like Mateo's doesn't just happen. His mother, Luisa Fernanda Espinosa, is a freelance stylist – and what better branding than her own impeccably attired offspring? (His father is the owner and CEO of a private equity firm.) Espinosa told the Cut Monday that she culls her son's wardrobe from "Kitson Kids, Dior, Gucci ('for leather jackets'), Stella McCartney, Bon Point ('French couture for kids'), Nordstrom, H&M ('for amazing basics'), Little Marc Jacobs ('amazing'), Dolce & Gabbana ('great'), and even Target." And if you replaced the phrase "even Target" with "all but exclusively Target, with a healthy heap of Goodwill," you'd have a sense of what my children's wardrobes look like too.

But while Mateo doesn't lack for designer duds, hair products or smoldering good looks, he does fall short in the whimsy department. That's where Quinoa comes in. Quinoa is Mateo's female fashion equivalent – a Pinterest star with a limitless wardrobe, perfect hair and friends named Hampton, Chevron and Dolce. Quinoa is also, as her page makes clear, imaginary.

The brainchild of Australian blogger Tiffany Beveridge, Imaginary Toddler is an exhaustive and exhausting compendium of fashion photos of serious-looking preschoolers wearing ridiculously extravagant clothing, complete with equally over-the-top captions. "Quinoa loves to have special mother-daughter talks in spectacular clothes and illuminating lighting," she writes in one, while in other she explains that "When I asked Quinoa what was on the horizon, she stared at it and said, 'Chambray.'" My favorite is the self-explanatory "Quinoa farts glitter."

As Beveridge, who has two sons, explained to Mashable, "The only thing that ever made me pine for another child was little girl clothes." But when she started searching the Internet for images, she realized, "They were begging for some sarcasm, and it kind of just grew from there." Mateo even makes an appearance on her page, as Quinoa's disenchanted brunch companion "Ridley."

If you've ever been around young children, you know that they are natural born ruiners. Sure, they're all innocence and wonder and unconditional love, but they are also monstrously hard on clothes. They dribble ice cream all over them and roll around in the dirt in them and have toilet training setbacks in them and they wear a pair of shoes for a week and then they infuriatingly grow out of them. Quinoa doesn't have such quotidian problems as food stains -- her pretend mom muses, "Guess what they serve for breakfast at Tiffany's? Elitism." And that is why seeing small people in expensive clothes is so strangely fascinating to big people. It's a vision that is at once beautiful and flat-out insane and unnervingly ominous. To see a preschooler cavorting down the street in Gucci is like watching a stuntman ride his motorcycle into the Wheel of Death. You know that at any moment it could turn into pure wreckage. And though it'll never show up on his Instagram feed, you know that somewhere, Mateo's Tom Ford-clad lap is drenched in organic grape juice.