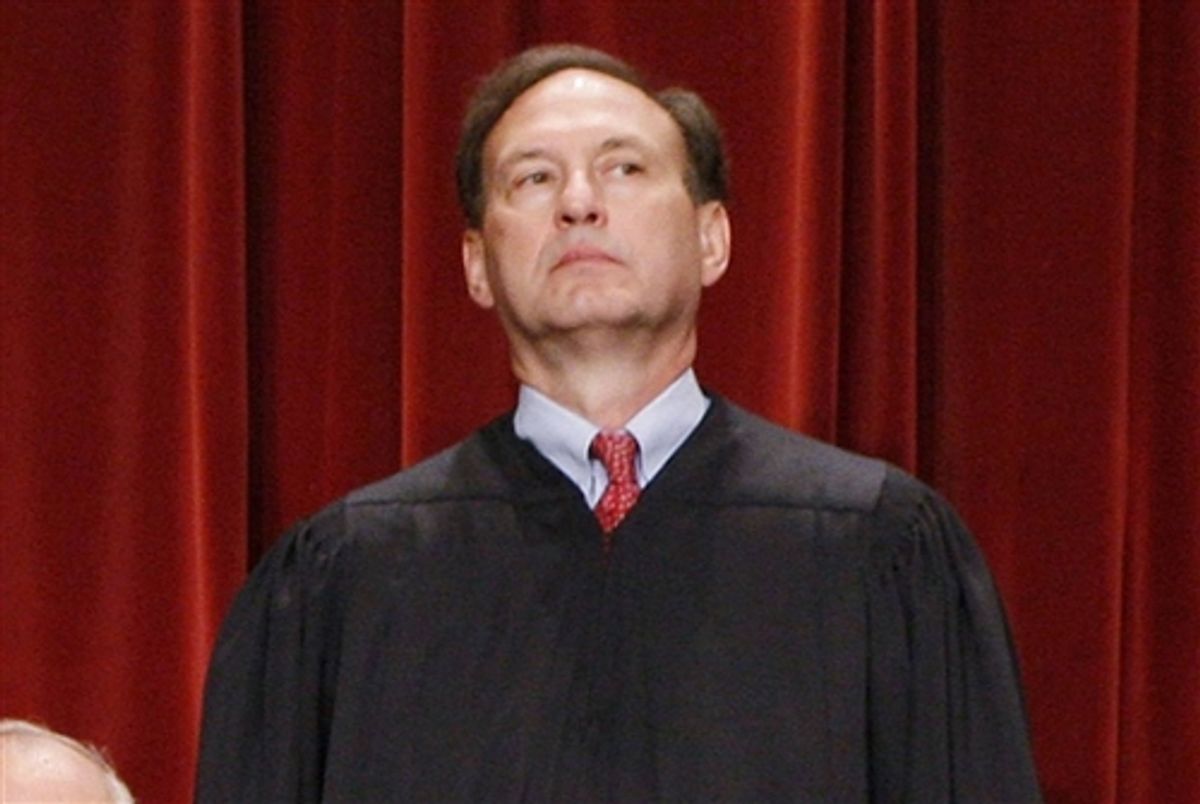 Supreme Court Justice Samuel Alito is being widely criticized for his behavior on Monday while Justice Ruth Bader Ginsburg read the dissenting opinion on an employment harassment case; the associate justice is widely reported to have rolled his eyes and shook his head "no" while Ginsburg -- the second woman to serve on the high court and possessing more than a decade of experience on the bench -- noted that the majority ruling on Vance v. Ball State University would leave women vulnerable to workplace harassment without legal recourse.

Garrett Epps at the Atlantic noted Alito's judicial rudeness on Monday, and Dana Milbank from the Washington Post published a laundry list of the justice's high school antics in a Tuesday editorial.

Apparently, it's not the first time Alito has visibly expressed disdain for his female colleagues:

[Alito's] treatment of the 80-year-old Ginsburg, 17 years his elder and with 13 years more seniority, was a curious display of judicial temperament or, more accurately, judicial intemperance. Typically, justices state their differences in words — and Alito, as it happens, had just spoken several hundred of his own from the bench. But he frequently supplements words with middle-school gestures.

Days earlier, I watched as he demonstrated his disdain for Elena Kagan and Sonia Sotomayor, the two other women on the court. Kagan, the newest justice, prefaced her reading of an opinion in a low-profile case by joking that it was “possibly not” the case the audience had come to hear. The audience responded with laughter, a few justices smiled — and Alito, seated at Kagan’s right elbow, glowered.

Another time, Sotomayor, reading a little-watched case about water rights, joked that “every student in the audience is going to look up the word ‘preemption’ today.” Alito rolled his eyes and shook his head.

But Alito doesn't reserve his bad attitude exclusively for the female Justices, as Milbank notes: the George W. Bush appointee gave a major stink eye during the 2010 State of the Union address in which President Obama criticized the court's decision in the Citizens United case.