The fact that black voters beat back modern suppression efforts in 2012 must mean they don’t need protection! 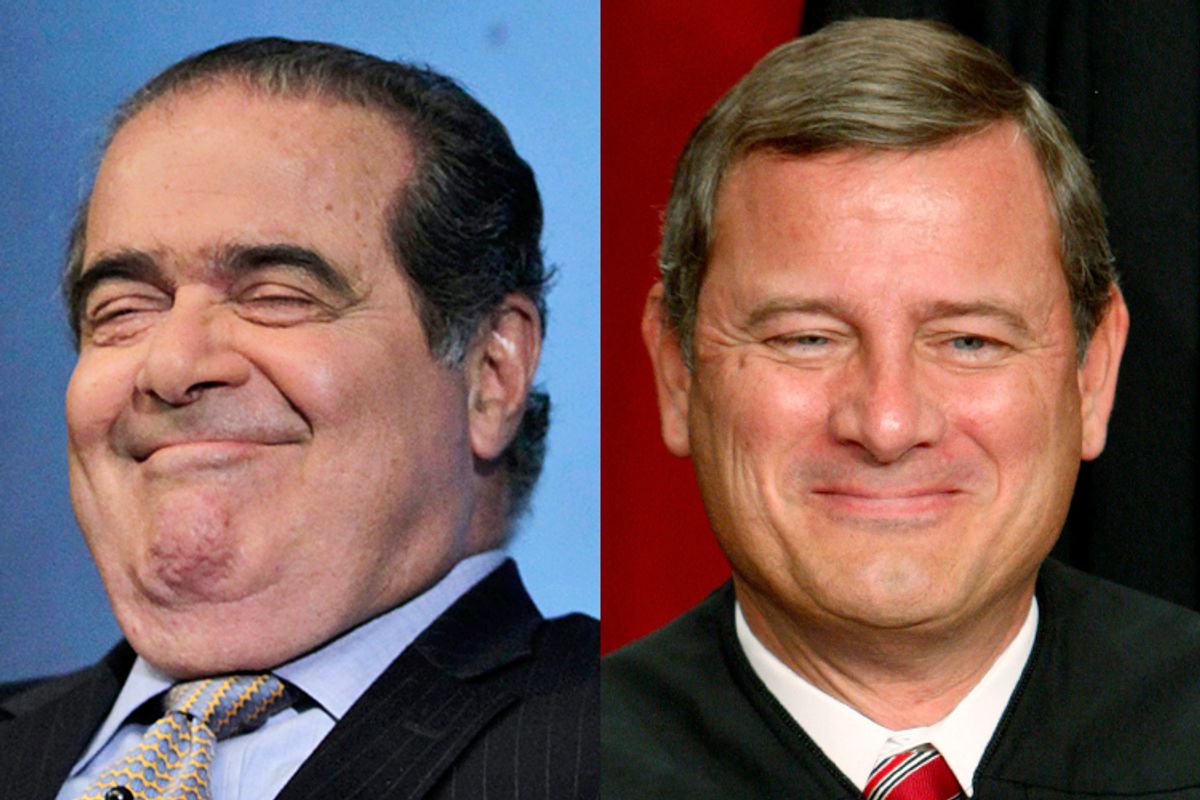 No good deed goes unpunished, I like to say. In striking down a key enforcement provision of the Voting Rights Act, Chief Justice John Roberts noted that African-American voter turnout in 2012 either exceeded or essentially matched white turnout in five of six Southern states governed by the act’s tough and controversial Section 5.

Ironically, as anyone paying attention knows, that turnout surge was driven by anger over a wave of GOP efforts to suppress black votes in those and other states – and it was helped along by Section 5, which requires states with a history of voting rights suppression to pre-clear any voting changes with the Justice Department (Justice struck down 21 such proposals since 2006). Still, despite new voter identification laws, restrictions on early voting and Sunday voting and other barriers, African-Americans voted at unprecedented rates in 2012 – and that helped give Roberts an excuse to strike down a section key to enforcing the law.

Of course, 2012 turnout wasn’t Roberts’ real excuse: He has been advocating for limiting the scope and power of the Voting Rights Act since he worked for Ronald Reagan’s Justice Department 30 years ago. In 2009, the last time the court considered Section 5, Roberts asked the government attorney defending it: "Congress can impose this disparate treatment forever because of the history in the South?”

Now we know the answer: They cannot.

But Roberts’ majority opinion is slick: Surprising many civil rights advocates, it didn’t strike down Section 5, Instead, it struck down Section 4, which established the formula that determined which areas were governed by Section 5.  So pre-clearance of voting rights changes is still constitutional – but right now no jurisdiction is subject to it. Clever.

John Roberts the politician, not the ideologue, wrote the majority decision (it’s the same guy who ruled that Obamacare was constitutional, while striking down its Medicaid expansion mandates). Roberts praised the results achieved by the Voting Rights Act, citing rising African-American voter participation across the South and concluding, “There is no doubt these improvements are in large part because of the VRA.”

And while Antonin Scalia joined Roberts’ majority opinion, the chief justice didn’t partake of his colleague’s rhetoric of racial grievance. In February’s oral arguments, Scalia complained that voting rights had become “a minority entitlement” subject to unconstitutional favoritism by politicians scamming votes.   “I don’t think there is anything to be gained by any Senator to vote against continuation of this act,” Scalia mused. “And I am fairly confident it will be reenacted in perpetuity unless — unless a court can say it does not comport with the Constitution … They are going to lose votes if they do not reenact the Voting Rights Act. Even the name of it is wonderful: The Voting Rights Act. Who is going to vote against that in the future?”

The Roberts opinion, by contrast, didn’t find anything except Section 4 unconstitutional – and left it to Congress to come up with a new formula under Section 4 to theoretically continue with Section 5 enforcement. Where Scalia suggested Congress couldn’t be trusted with voting rights decisions, Roberts’ decision sends the question back to Congress to come up with formulas and procedures that reflect the racial voting patterns of 2013.

The problem with Roberts’ reasoning is this: Congress has had many chances to weaken, change, adapt or kill the Voting Rights Act, and they’ve reauthorized and strengthened it four times since 1965 – in 1970, 1975, 1982 and 2006, when it passed 98-0 in the Senate, almost unanimously in the House and was signed by President Bush. (That vote extended it for another 25 years.) In her dissent, Justice Ruth Bader Ginsburg questioned the majority’s disrespect for the law – and for Congress:

In the Court’s view, the very success of Section 5 of the Voting Rights Act demands its dormancy. Congress was of another mind. Recognizing that large progress has been made, Congress determined, based on a voluminous record, that the scourge of discrimination was not yet extirpated. The question this case presents is who decides whether, as currently operative, Section 5 remains justifiable, this Court, or a Congress charged with the obligation to enforce the post-Civil War Amendments ‘by appropriate legislation.’ With overwhelming support in both Houses, Congress concluded that, for two prime reasons, Section 5 should continue in force, unabated. First, continuance would facilitate completion of the impressive gains thus far made; and second, continuance would guard against backsliding. Those assessments were well within Congress’ province to make and should elicit this Court’s unstinting approbation.

There’s no quibbling over the impact of the Court’s decision today. “What the Supreme Court did was to put a dagger in the heart of the Voting Rights Act of 1965,” a visibly shaken Rep. John Lewis told ABC News. “This act helped liberate not just a people but a nation.” The civil rights hero is pessimistic that Congress will be able to agree on new jurisdictions and enforcement measures to put teeth back in the act.  “In 2006, we had the ability and capacity to come together in bipartisan fashion to renew the Voting Rights Act of 1965,” Lewis said. “I’m not so sure whether we have the will to do what we must do and should do.”

I wrote about this after oral arguments on the case:

It is certainly true that some states that aren’t covered by Section 5 are imposing new voter restrictions: harsh ID laws in Pennsylvania, a cutback in early voting in Ohio and Wisconsin, and an end to the Sunday before Election Day voting hours that the black community had claimed for a last “Souls to the Polls” push in Wisconsin and other places. That doesn’t mean the covered states have stopped looking for ways to limit voting rights, but in a better world, Congress might well extend Section 5 to cover more states.

But this isn’t that world. Despite Johnson’s strong leadership, the 1965 Voting Rights Act passed with a higher percent of Republicans supporting it than Democrats, given that segregationist Democrats ran the South. But since then, the parties have to an extent traded sides. It’s true, and praiseworthy, that in 2006 Republicans supported the act’s reauthorization. But after President Obama was elected with record-breaking turnout by black and Latino voters in 2008, at least 38 states have tried to place new restrictions on voting, whether by increasing requirements to register or by limiting the number of days and locations where people can vote. Every single one of those laws, whether proposed or enacted, was sponsored by a Republican. Sadly, just since 2006, voting rights protection has become a partisan issue.

On one level, I find myself thinking along similar lines as Antonin Scalia – that it’s hard to trust politicians with voting rights decisions -- although my political reasoning is exactly the opposite of his.

The paradox at the heart of voting rights protection is this: the elected officials charged with protecting those rights via legislation and other means may well be invested in curbing them instead. That paradox was best viewed in the Jim Crow South, but it’s been apparent going back to Richard Daley’s Chicago and Republican Gov. Tom Corbett’s Pennsylvania and Scott Walker’s Wisconsin. The current partisan battle over immigration reform is in part a voting rights skirmish; since conservatives like Ann Coulter believe Latinos are irretrievably Democrats, they don't know why Republican leaders would want to give citizenship and voting rights to 11 million new Democrats.

It’s also sad to realize that the same tyrannical minority that has devoted itself to blocking the majority’s will on immigration reform, gun control, tax reform, jobs and climate change is also unlikely to do the right thing on voting rights protection. And yet, that’s the truth. That’s why a lot of progressive groups have been arguing that we need a new civil rights mobilization to expand voting rights protection, which can in the long term lead to turning out, or turning around, that intransigent GOP minority.

At Netroots Nation I moderated a great panel on what that movement might look like – it would change Senate rules, overturn or counteract Citizens United as well as push for broader voter empowerment. The NAACP’s Ben Jealous told the audience that no matter what their No. 1 issue is – women’s rights, labor rights, the environment, jobs – their No. 2 issue must be voting rights. Today’s decision proved him right. Civil rights leaders are talking about making the 50th anniversary of the 1963 March on Washington a dramatic voter empowerment event, and that would be great.

Early Tuesday John Lewis tweeted that this SCOTUS decision came down on the 49th anniversary of the day three civil rights volunteers disappeared in Mississippi – James Chaney, Mickey Schwerner and Andrew Goodman were reported missing by their Freedom Summer allies the night of June 25, 1964; they were found murdered days later. The killings helped galvanize public will behind the Voting Rights Act. I'm not sure what will galvanize a new movement for voting rights, but it's got to take off today.