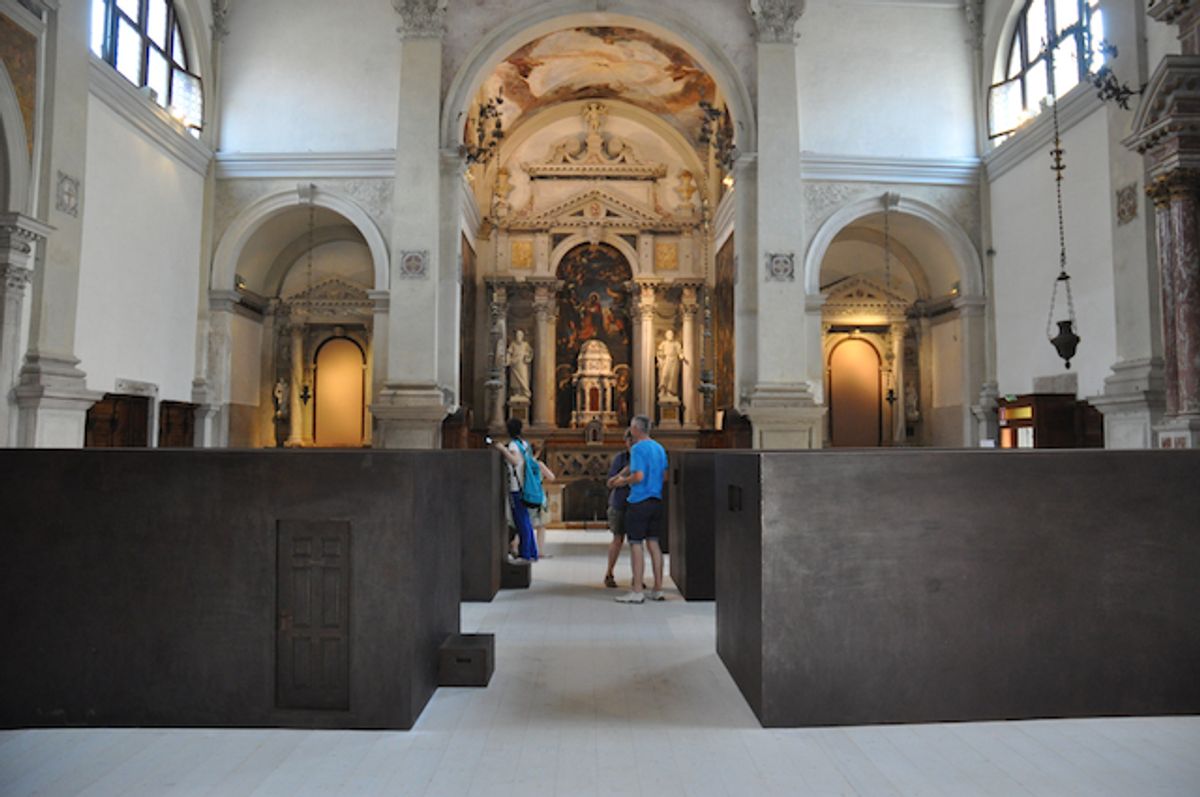 (All photos by the author for Hyperallergic)
--

VENICE — Chinese dissident artist Ai Weiwei’s six-part “S.A.C.R.E.D.” (2011–2013) is a stark installation that sits beneath a round, heavenly fresco by the late Baroque artist Sebastiano Ricci, surrounded by the works of other Italian Old Masters, including a fresco by Alessandro Vittoria, an altarpiece by Renaissance artist Lazzaro Bastiani, and a chapel with works by Mannerist painter Palma il Giovane.

Entering from the street, you walk into a typical Venetian church interior, but in place of pews you see six oversized iron boxes that at first resemble a Minimalist installation. Upon further inspection, you discover windows and “skylights” that allow you to peer into six scenes from the artist’s 81-day incarceration in 2011.

The work’s acronym, “S.A.C.R.E.D,” stands for “Supper, Accusers, Cleansing, Ritual, Entropy, Doubt,” and each box takes on one of those themes in the form of a diorama. Inside one of these menacing boxes we see a naked Ai Weiwei showering as guards watch, in another he is being interrogated by men (one points at him in an accusatory manner, while another types on a laptop), and in each tableau of the story we’re left to ponder the shadowy world of 21st century state surveillance networks.

Since these works were unveiled late last month they have become more poignant than ever. Recent revelations about the infrastructure of the US surveillance apparatus and the increased monitoring of our lives by governments of every political persuasion should concern us all. These works in the Chiesa di Sant’Antonin, which sits on a quiet corner in the city’s easternmost district, can’t help but take on a religious connotation, as if they are an early hagiography for an artist who may one day become a saint of some sort.

You leave the work with a sense of the claustrophobia experienced by a man who temporarily disappeared without knowing if he’d ever see the light of day again. This is a monument stoked by our paranoia and we can’t help but think that there but for the grace of God go Ai.