Texas Republicans want to get the national hero out of the state Senate. Maybe she should run for governor instead 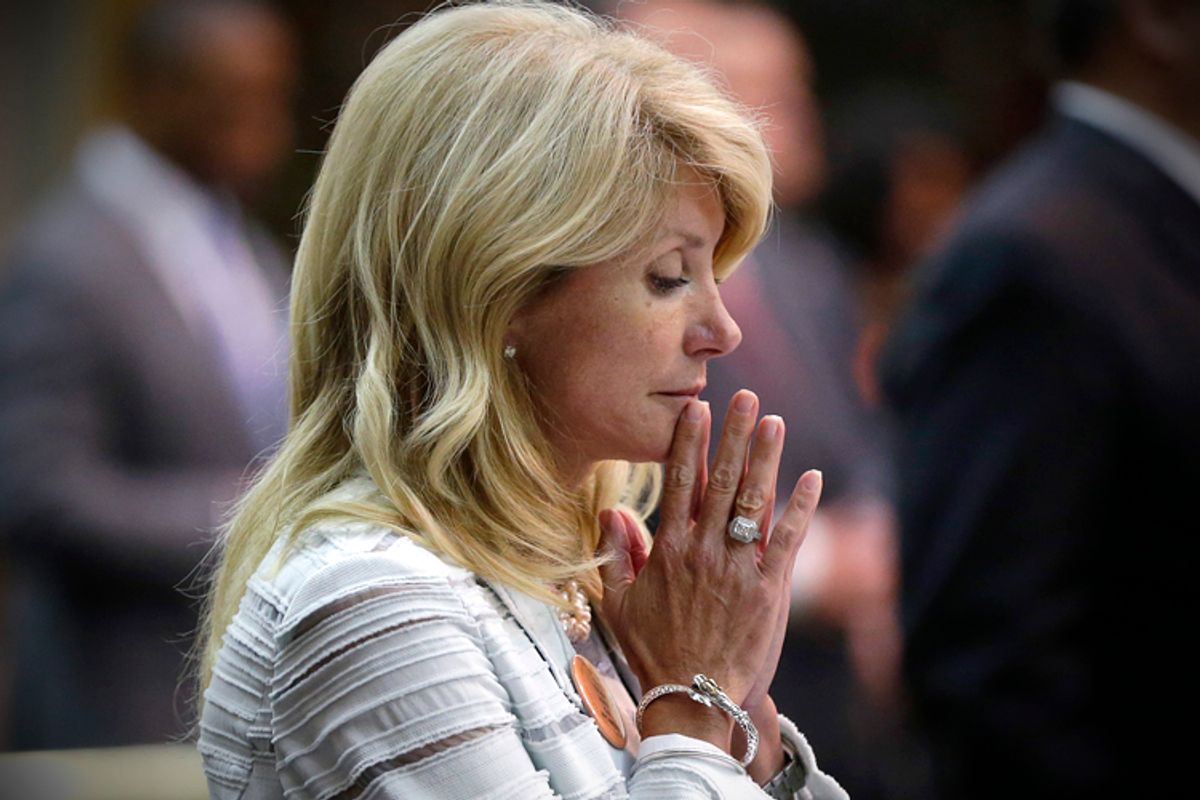 It seemed a strange convergence early Wednesday morning: On the same day the Supreme Court gutted the Voting Rights Act, Texas state Sen. Wendy Davis pulled off a heroic filibuster that ultimately defeated draconian antiabortion legislation – and yet she could be a victim of that court decision, as state Republicans moved ahead with redistricting plans blocked in 2012 that could effectively eliminate her seat, even while she was filibustering.

I certainly think that voting rights and women’s rights activism ought to converge in Texas to make sure Davis keeps her seat, if she wants it. But Wednesday night I began to dream there might be an even better test for those two movements: Backing Davis in a run against Texas’s forgetful, pandering far-right Gov. Rick Perry.

Personally I thought Perry shamed himself with his slapdash run for president, but lots of people think it made him stronger at least on the right. Whatever. It certainly made national Democrats more aware of what Texans are living with. Wendy Davis’ filibuster made us more aware of the state’s progressive promise.

On “All In With Chris Hayes” Wednesday night, Davis didn’t deny she had statewide ambitions. “I’d be lying if I told you I didn’t have aspirations to statewide office,” she told Hayes. “I love this state.” She was also brutal in reply to Perry’s declaration that “we will not allow the breakdown of decorum and decency” to defeat SB 5, and therefore he’d convene yet another special legislative session.

“Gov. Perry and Lt. Gov. [David] Dewhurst led the charge in terms of a breakdown in decorum,” she said, charging it made “a mockery of all the rules we run by in this state. The people who were there in the gallery were observing decorum … until they could no longer take it.”

I said it in my piece last night, but I didn’t emphasize it enough:  State Sen. Leticia Van der Putte’s question to Dewhurst -- “At what point must a female senator raise her hand or voice to be recognized over her male colleagues in the room?” -- was the one that pushed the crowd in the gallery into a glorious democratic frenzy. And it was the gallery’s frenzy that ultimately kept the GOP from pushing the vote before midnight. Davis characterized her filibuster as “handing that microphone essentially to the people of Texas.”

Let’s hope the people of Texas have Davis’ back, whether she runs for reelection to her seat despite the GOP’s efforts to driver her out of it – or gives Perry a 2014 challenge.

Here’s her interview with Chris Hayes: