Why stories of female sexual predators shock us

Alissa Nutting, the summer's most controversial author, on "Lolita" and why her book isn't the next "Fifty Shades" 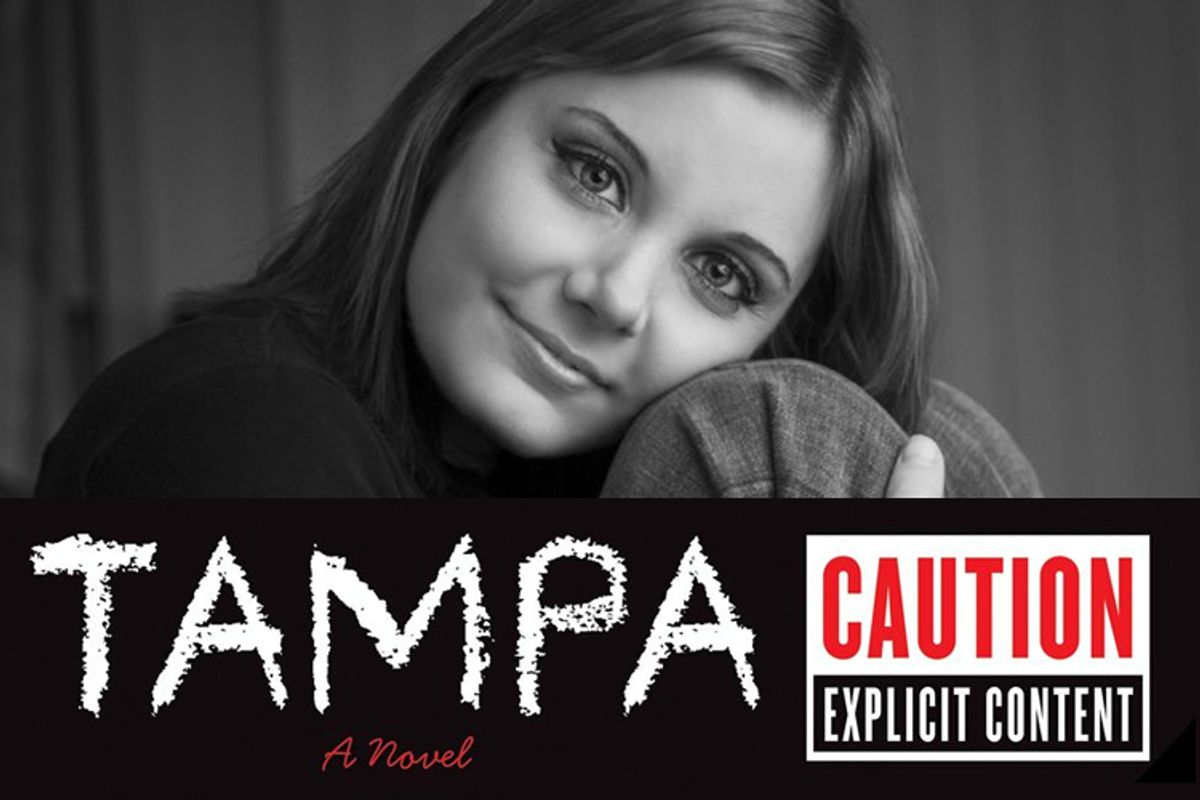 It may be the summer's best beach read -- that is, if you ditch the disconcertingly woolly black velour dust jacket, and make sure your kids aren't peeking over your shoulder.

"Tampa," by Alissa Nutting, is a tale of lust that draws out the dynamic between a predatory teacher and her lascivious students. The twist -- if indeed it is a twist -- is that the predator here is a woman, and that her crime is hardly one of opportunity. Celeste Price, the novel's protagonist, takes a job as a teacher specifically to seduce young boys, those untouched by incipient manhood. She's calculating in a manner that's utterly compelling, because she explains every step of her reasoning -- and every pulse of her body -- to the transfixed reader. Nutting has described the book, in other interviews, as inspired in part by studying in high school with a woman who went on to teach and to have sex with her students.

And so she shows us every detail of a richly imagined routine built around transgressive, morally appalling sex. Celeste, throughout the novel, slathers herself with lotions so that she appears closer in age to her students; she drugs herself to mute the pain of sex with her unsuspecting husband and drugs her husband so that she can escape his advances when they're unbearable; she evades her colleagues and the parents of her students with a perceptive criminal mind. The reader hardly roots for Celeste to escape punishment, but watching the machinations of her mind, the degree to which she can defend any of her actions and ensure that she's always one step away from society, is completely entertaining.

Beyond mere titillation, "Tampa" gets at fundamental questions: What are the limits of reader empathy? If an individual we'd view as an unrepentant criminal explains her twisted thought process, are we complicit if we keep reading? And is an adult woman seducing a young male student -- with its air of "hot for teacher" fantasy -- meaningfully different from male pedophilia? We spoke to Nutting, a teacher of creative writing at Ohio's John Carroll University, about her explosive book, whether she expects to join the "serious novelist" crowd, why "Lolita" conforms to sexual stereotypes, and what she learned from her own anxiety.

I've seen this book compared to "Fifty Shades of Grey" on its GoodReads page. Given that E.L. James' novel is about two adults, does that bother you?

[laughs at some length] Yeah ... I understand the comparison based on extremity. I think that "Fifty Shades of Grey" is probably one of the first contemporary mainstream infusions of literature with a great deal of sexuality included in it. And I understand the fact that that's a female author writing a sexually explicit book, which also isn't awfully common -- that's kind of where my understanding of the comparison leaves off. In this book Celeste is a predator. The relationship by law cannot be consensual.

But it also suggests that "Tampa" is being kind of marginalized into the pile of books for women exclusively, rather than "important" novels -- which are usually by men.

Absolutely. I think that that does happen. Realistically, unfortunately, I think that really blatant sexuality and works that feature humor or comedy, all of these things are traditionally written off as being lowbrow. There's a notion that really grand novels, the novels that are going to win the big awards, need to be dark, dramatic, serious, sweeping and tasteful. There are these rigid boundaries, and when you cross over them -- if you get too sexually explicit, if it's too humorous or satirical -- you fall out of the mainstream literary sweet spot. There are some people who dismiss every work that does fall out of it, who don't take that work as seriously.

Would you be bothered if your work weren't taken as seriously as those more sweeping, tasteful books?

As a writer, I'd be lying if I said that I wouldn't enjoy the acceptance and the admiration that comes with that recognition and that stature. But I've always felt that my writing is frankly too weird, too transgressive, to fit into that spot. I'm attracted to monstrosity, desperation, characters who are not socially accepted. I've never really seen myself as being one of the in-crowd.

Let's talk a little bit about what you describe as the "humor" and "satire" of the book. Was it meant to be a sort of leavening agent amid all the darkness of Celeste's sex life?

I felt like if this were just a book solely of scene after scene of depraved sexual action, I don't see the pleasure of reading that. The main character in any kind of satirical novel has this role of showing what the social critique is. Whether or not the character [herself] is mindful of it. There are a lot of social critiques Celeste is mindful of. She herself realizes how out of control and insane her behavior is and is willing to poke fun at it. I knew that to have a character whose actions are as unlikable as Celeste's are, the voice had to in some way compensate, in some way be likable. I wanted some of that tension to be stuck in the reader's throats -- she's doing this repulsive thing but we're laughing with her. We can see the faults in other characters that she sees. The father of her primary target, Jack, is wildly out-of-touch with his son and is more concerned with fulfilling his own libido than with ensuring he's doing a good job as a parent. That's something Celeste shows us. I wanted to use Celeste as an object of illuminating critique in other characters.

This book has many other obvious differences from Vladimir Nabokov's "Lolita," but one that's particularly striking is that "Lolita" depicts a male predator and female victim -- and it's by a man. For all your belief that you won't crack the serious-lit crowd, "Lolita" is a classic, taught at the most hidebound universities. Is that just a function of time passing since its publication, or is something gendered happening here?

We would see such a situation [of sexual exploitation] with kind of a female [victim] traditionally in our society. Debasing her and reducing her and victimizing her. Where in the same situation with a male, it's in some way him earning his masculinity, this initial sexual conquest that's a feather in his cap rather than a victimizing experience. That's one perception that this novel engages against. In "Lolita," we understand, immediately, Humbert to be the predator. We understand the ways Lolita is vulnerable, and how he's damaging her. In "Lolita," he claims to be in love with her, he has this romantic way of justifying his actions and acting like a more normalized romantic relationship, whereas Celeste is just this hyperbolic libido. She has no concern about these students. She's not worried what damage she does to them. She has no thoughts of monogamy or any lasting relationship. She wants to use them at this specific age and spit them out and move on to the next one. I felt like in working against that stereotype you mentioned of the boys being lucky, I wanted to have her be this exaggerated predator, but even then, society is really bad at not idealizing her simply because of the way she looks.

To me, it's not controversial to teach "Lolita" in schools. I see its literary merits quite clearly. We're far more normalized toward stories of female victimization. We're far less likely to sit back with our mouths open in shock or more comfortable characterizing older males as predators or seeing them in that role. In all of those aspects, "Lolita" is a very traditional text. It doesn't really challenge at all these fundamental stereotypes we have of predator and victim. It's a key that fits perfectly into that lock, and it's a canonical representation of that mainstream role binary we're very familiar with.

"Tampa" is likely to cause a stir, in my uneducated opinion -- banned from libraries, "Today" show segments, and all the rest. Are you ready for that? Are you dreading it? Or did you intend it?

In daily life, I'm not a big wave-maker at all. I'm very polite and conciliatory. But I wrote this book in order to open the dialogue for social discussion. I could understand how bannings or controversial outcries might advance the social dialogue around this topic in a way that would please me. But I'm not one of those people who are fueled by controversy. I wouldn't look forward to dealing with it.

You've written clearly and wrenchingly, recently for the New York Times, about your own struggle with anxiety. What has that anxiety taught you about writing fiction?

I think it makes it easier to write obsession. It adds, perhaps, kind of a realism to the illogical things that make each one of us the idiosyncratic individuals that we are, and makes fiction credible. I remember reading this great, odd article in this vintage dental publication with all of these crazy photos. One of the guys who made dentures said it was their imperfections that made them look real. That's what keeps people from thinking that they're dentures. That's true of characters in fiction. There are things wrong with them that make them compelling and make them seem like individuals. All of our own struggles are a great window into all that.