Women can be sexist pigs too 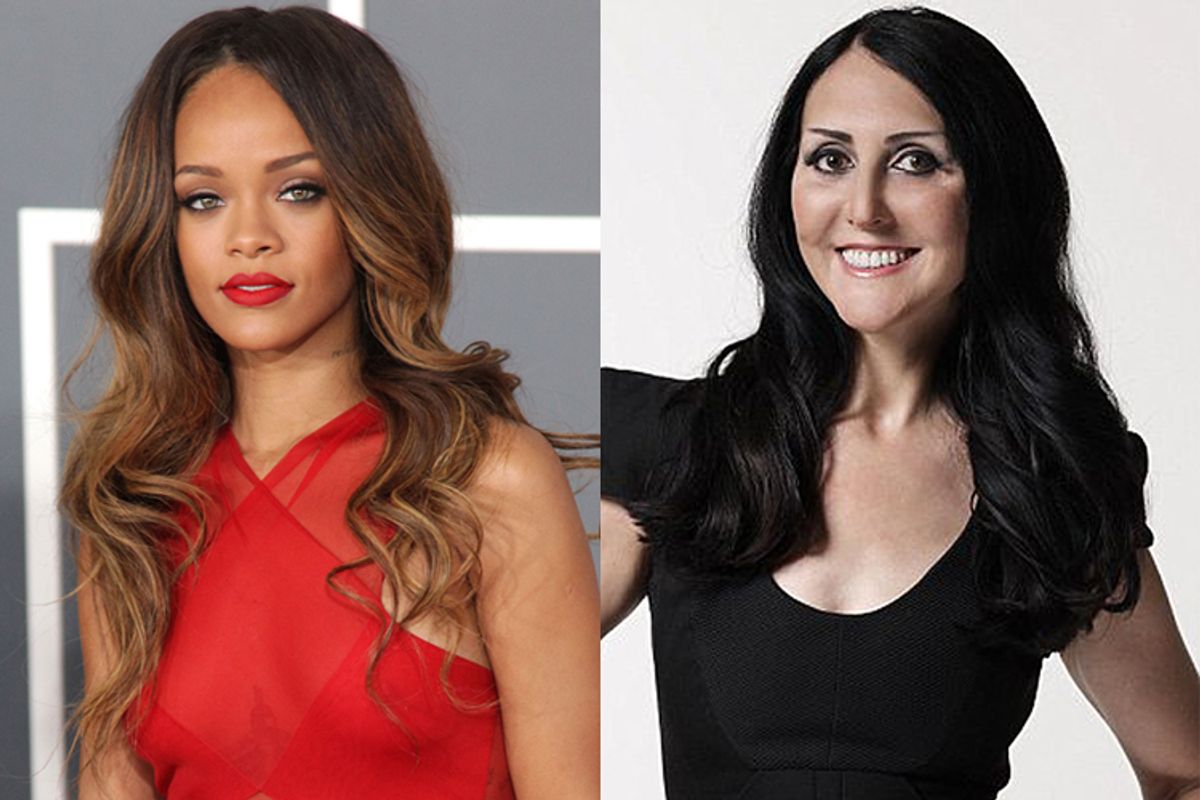 One of the hard-fought ideals of feminism is that women can be the equals of men in any field. And so, as an unapologetic feminist, allow me to take my hat off this week to both Daily Mail columnist Liz Jones and superstar Rihanna, for proving that ladies can really hold their own in the realm of sexist trolling.

Jones has spent her entire career establishing herself as a walking collection of pure, bona fide nonsense. She's a gasbag, even by Daily Mail's notoriously incoherent standards. Long before her riled-up column on what a "toxic role model" Rihanna is earlier this week, she'd already made a name for herself as the columnist who most resembles that one relative with no filter you just try not to get into a fight with at holiday dinners. She's declared overweight people "lazy," homeless people "ignorant," and insisted that women "most definitely, incontrovertibly, do not want sex once they have children." That's why it wasn't exactly a shocker when she declared that Rihanna "promotes drug-taking, drinking and the sort of fashion sense on stage that surely invites rape at worst, disrespect at least" and is "infecting our High Streets with her gun tattoos, her false nails and fake hair, her bogus bad-ass shenanigans."

Yup, Liz Jones gets paid to tell people that Rihanna causes rape. It's a thoroughly hateful, angry, not-so-subtly racist screed, one that even the Daily Mail should be ashamed of. It perpetuates the despicable fiction that rape is something that women "invite," and revoltingly blames a public figure for not being the kind of "role model" the writer believes she should be.

But while Rihanna is not and never will be a cause of sexual assault or the decline of womanhood, her response to Jones shows a soul-crushing willingness to take the sexist low road too. On Instagram, the singer hit back by posting an unflattering photo of Jones and wrote, "That shit ain't clever!!! That shit ain't journalism! That's a sad sloppy menopausal mess!!!" Hoo boy.

Rihanna is putting it mildly when she declares that what Jones does for a living isn't journalism, and calls her out as an "amateur." And she's both gutsy and right when she says that "Role Model is not a position or title that I have ever campaigned for" and that "I'll never portray that as perfect, but for right now it's ME!!" But where she makes it genuinely ugly is by going after a woman not just for her stupidly but her age and her looks. Taking a page from the Liz Jones playbook, her attack of Jones is couched in terms of her sexual viability. It's not enough to point out that the 51-year-old Jones is terrible. Rihanna has to make sure her audience sees her as unattractive and "menopausal" -- a word that brims with a whole raft of other sexually negative connotations.

It's 2013, and you're still either rape bait or a dried-up hag. The whore or the crone. Take your pick, ladies! In the end, Jones still remains the far bigger buffoon for her vile attack and her dangerously victim-blaming mind-set. But let's criticize her for being a jerk, not for daring to be both female and 51. It's a cheap shot – and besides, our "putting women down for being over 50" criteria for the week was already met when CNN did a whole segment pondering whether Madonna is "too old" to booty pop. I'll say this for the whole nasty exchange, though – it's proof you don't have to have a penis to be a raging, ignorant misogynist.