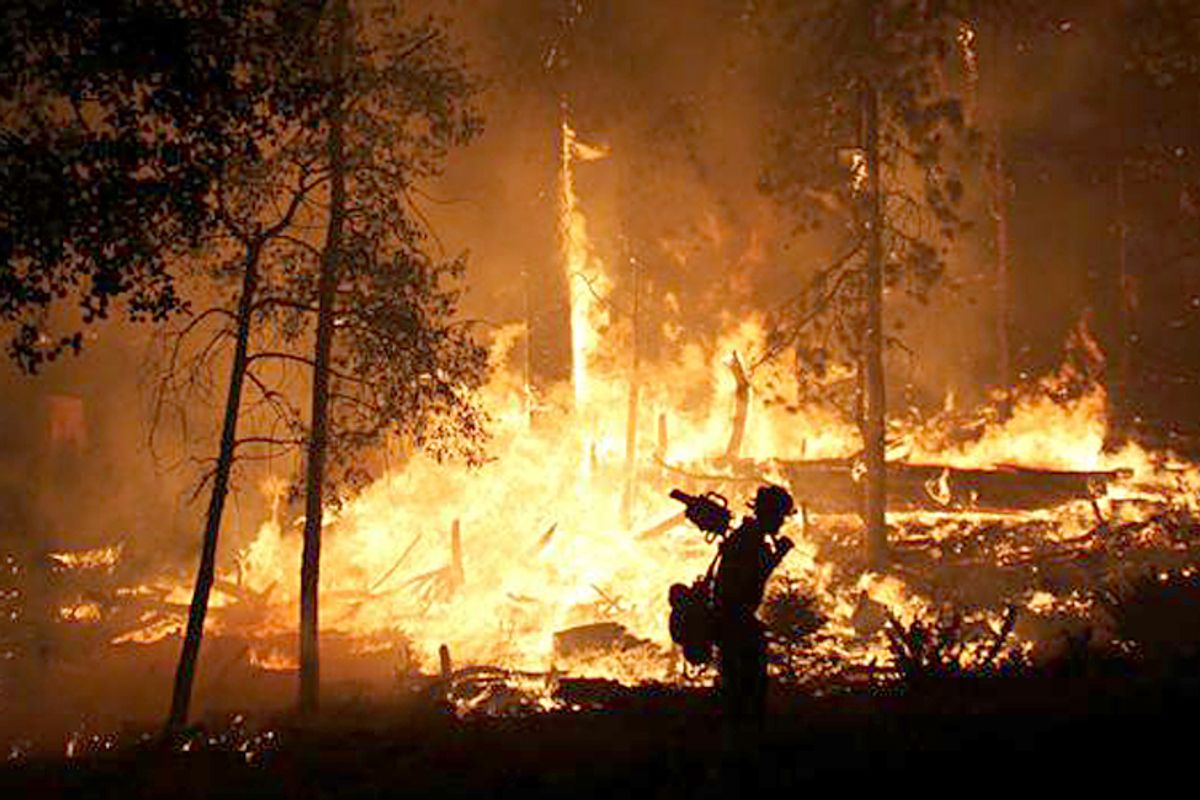 Considering the smoke that has periodically enveloped my home and others here in Denver as Front Range wildfires rage, it would be easy to look at this recent Associated Press story and shake my fists at those in Washington afflicted with what I've previously called Selective Deficit Disorder. That's the pathology whereby politicians cite deficit fears as rationale to slash domestic social programs, but suddenly ignore those fears when supporting far more expensive stuff like wars and corporate welfare.

The AP story about "the federal government spending less and less on its main program for preventing blazes" can seem at first glance to fit within this pathology; it looks like another example of politicians who cheerily back bigger defense budgets and an expensive border buildup pretending to be fiscal conservatives by irresponsibly shortchanging the most essential of domestic programs. But, then, thankfully, there's no evidence that this funding cut has hampered efforts to stop the fires currently burning. And, more important, while Selective Deficit Disorder may in fact be the cause of the reduced federal funding for firefighting, a close look at the wildfire problem suggests that in this rare case, such reduced funding may inadvertently be the most responsible long-term policy.

Appreciating that latter point first requires an understanding of why wildfires have become such a problem in places like Colorado in the last few years.

Yes, the science is undeniable: Much of the proliferation and increased intensity of wildfires has to do with the severe weather (and, in particular droughts) brought on by climate change. No doubt, our refusal to more seriously combat climate change (by, say, reducing emissions from power plants, halting subsidies to emission-intensive ag industries, etc.) makes that problem worse.

However, as I noted in a column published during our last wildfire season, much of the reason these fires are wreaking more societal havoc (property damage, government expense, etc.) has to do with our additional unwillingness to even minimally adjust to the realities of that climate change.

In the case of wildfires, that obdurate attitude translates into an unwillingness to give up the "build anywhere" ethos that defines McMansion dreams. The data I cited in my column tells the story:

As coastal folk headed to the Rocky Mountain frontier with visions of big-but-inexpensive castles far away from the inner city, the term "zoning" became an even more despised epithet than it already had been in cowboy country. Rangeland and foothill frontiers subsequently became expansive low-density subdivisions...farther and farther away from the urban core. That is, farther and farther into what the federal government calls the Wildland Urban Interface (WUI) and what fire experts call the dangerous "red zone."

The numbers are stark: According to the Denver Post, between 1990 and 2000, 40 percent of all homes built in the nation were built in the WUI — and "a Colorado State University analysis expects a 300 percent increase in WUI acreage in the next couple decades." In the last two decades in fire-scorched Colorado alone, I-News Network reports that "a quarter million people have moved into red zones," meaning that today "one of every four Colorado homes is in a red zone."

How does any of this relate to federal funding of fire suppression, you ask? As Headwaters Economics shows, it is all about distorted incentives.

In explaining its calls for serious cuts to federal firefighting programs, the watchdog group (which is hardly a right-wing group, by the way) explains how too much firefighting money from Washington ends up encouraging local governments to make irresponsible zoning decisions. The way it works is straightforward: because federal money means counties don't have to pay the full cost of firefighting that comes from permitting development in fire zones, those counties often feel free to allow that kind of development without concern for what it would mean for their budgets. That dynamic has consequently meant counties approving more development -- and often with inadequate fire codes -- in fire zones, thus increasing the wildfire problem.

Headwaters explains why reducing federal firefighting funding -- rather than increasing it -- is one of the ways to short-circuit this problem:

Reduc(ing) the amount of money available to the Forest Service and BLM for wildland firefighting, will force these agencies to shift the costs down to the local level, closer to where private land use decisions are made. County governments currently enjoy a firefighting subsidy from the Forest Service, BLM, FEMA and state governments, so there is no financial disincentive to curtail the building of more homes on fire-prone lands. If the federal government has less money available to spend, more of the burden of protecting homes will fall on county-level jurisdictions. This, in turn, will serve as a powerful disincentive to permit more homes in the wildland-urban interface...

If a higher proportion of the costs are borne by county governments then, to balance their budgets, county commissioners will be more judicious about permitting new developments in the WUI...A higher share of the cost responsibility for local governments could also provide county commissioners with the political cover they need to do land use planning that incorporates fire risk and to reject applications for new proposed residential developments that are in high-risk areas.

Before you accuse such a proposal of leaving innocent homeowners to fend for themselves, Headwaters notes that with the right reforms, "federal agencies could continue to protect already developed" properties in the red zone, and focus resources on fire prevention on those already-developed areas. However, as the organization says, "For new developments proposed in (those zones), the Forest Service and BLM managers could warn county governments that, if a fire breaks out, the county will receive a bill for a portion of the total cost of defending the homes."

This would create financial incentives for county governments to either a) halt fire-endangered construction in the 86 percent of the red zone that has not yet been developed or b) at least significantly strengthen building codes and zoning laws to make such construction far more fire safe.

It's worth noting that the latter would have the additional benefit of increasing red-zone construction costs, thus providing a market disincentive to build in such zones (and a market incentive to build in safer areas). That disincentive could be further strengthened by following the lead of California, which according to the Denver Post, "assesses a fee of $150 assessed on properties in burn zones." That levy has had the added benefit of raising $90 million a year for fighting fires in those zones. That means it helps limit the amount taxpayers who opt to live outside burn zones are forced to subsidize those who choose to live in them.

In a world where climate change is exacerbating extreme weather and natural disasters, this is just common sense. Just like climate-intensified hurricanes should move lawmakers to limit government-subsidized insurance that encourages people to build in flood zones, so too should climate-intensified wildfires prompt them to limit expenditures that encourage people to build in fire zones.

Yet, as obvious as this should be, acting on such common sense does require a change of attitude. It requires us to recognize that climate change is happening, and further to recognize that even if America (sadly) chooses not to do anything serious to try to stop climate change, that change will nonetheless have consequences -- the kind that will be far worse if we don't adjust.

Of course, "adjust" can sometimes be a euphemism for full-on social upheaval. But in this case, it's nothing of the kind. Indeed, when it comes to climate-intensified wildfires, it simply means relinquishing the expectation that taxpayers should somehow be incentivizing and subsidizing the McMansion dreams of developers who want more construction in fire-prone areas. That's hardly upheaval, and as a burning Colorado shows, it's really the very least we should be doing.