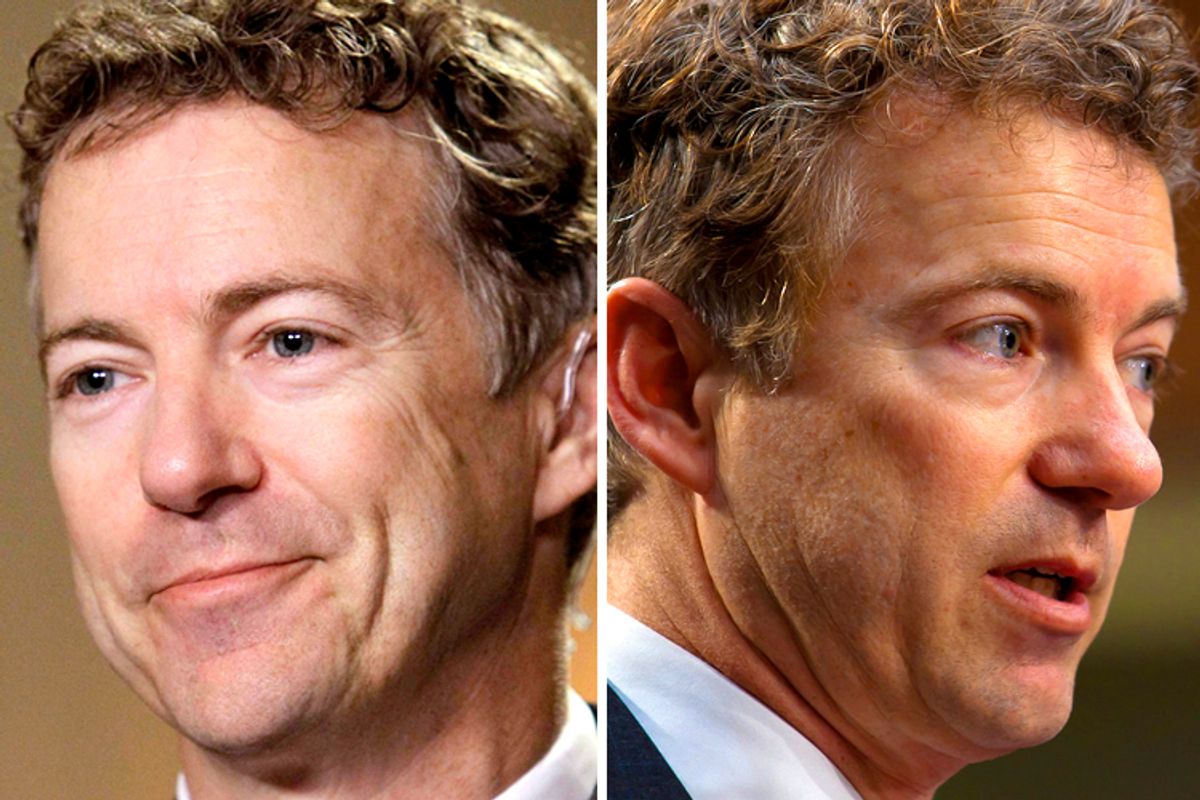 Republican Sen. Rand Paul got himself in a spot of trouble this week after speaking out of both sides of his mouth on gay marriage. When speaking to a national audience, via ABC News' Jeff Zeleny, the Republican senator seemed unconcerned: He praised Justice Anthony Kennedy's opinion striking down the Defense of Marriage Act for avoiding “a cultural war" and letting the states "agree to disagree."

But when speaking to a more conservative audience in an interview with Glenn Beck, Paul warned that changing marriage laws could lead to bestiality: “It is difficult, because if we have no laws on this, people will take it to one extension further -- does it have to be humans?”

Paul is known for being a Republican who respects gay people's personal freedoms, so his office moved quickly to walk back his comments once they got some attention, explaining that he was just joking. “Sarcasm sometimes doesn’t translate adequately from radio conversation,” a spokesperson said. Later, Paul himself went on Fox News to say, "I don’t think we’re going on towards polygamy or things beyond that.”

Sure he was joking. That must be why he told Beck, "I’m kind of with you. I see the thousands of year tradition of the nucleus of the family unit ... The stability of the marriage unit is enormous and we should not just say that, 'Oh we're punting on it and marriage can be anything.'"

Politicians alter what they say in Washington and in their district or state to some degree, but for Paul, the gap is wider than most. He has two bases, and there's a lot they don't agree on. Nationally, Paul is a libertarian hero who stages dramatic filibusters on drone policy, stands up for civil liberties, and most of all carries the mantle of his father's laissez-faire political movement. But back home in Kentucky, Paul needs to appeal to a predominantly social conservative Republican base.

"Support for gay marriage is on the rise nationally but it's going to be a long time before Kentucky voters get behind it," a PPP poll from April found. Just 27 percent of voters support it and that number plummets to 8 percent among registered Republicans. Nationally, a narrow majority of voters support marriage equality, including about a third of Republicans.

Take, even, civil liberties, Paul's signature issue for his national base. At CPAC, he concentrates his fire on the Obama administration's violations. But when he was running for the Senate in 2010, he said things like: "Foreign terrorists do not deserve the protections of our Constitution" and "I do not support a mosque being built two blocks from ground zero." Meanwhile, his pet project in the Senate is to defund foreign aid to Muslim countries that are sometimes mean to the U.S. It's hard not to see that as populist red meat for the voters back home.

This will be Paul's challenge in 2016, when he has to decide between running for the presidency or reelection. One campaign would be built on his national libertarian base, while the other would rely on his local social conservative one. It will be up to Paul to decide which version of himself he likes more.