"The Heat": Police misconduct as feminism

Sandra Bullock and Melissa McCarthy have a funny, uneasy chemistry, but "The Heat" leaves a nasty aftertaste 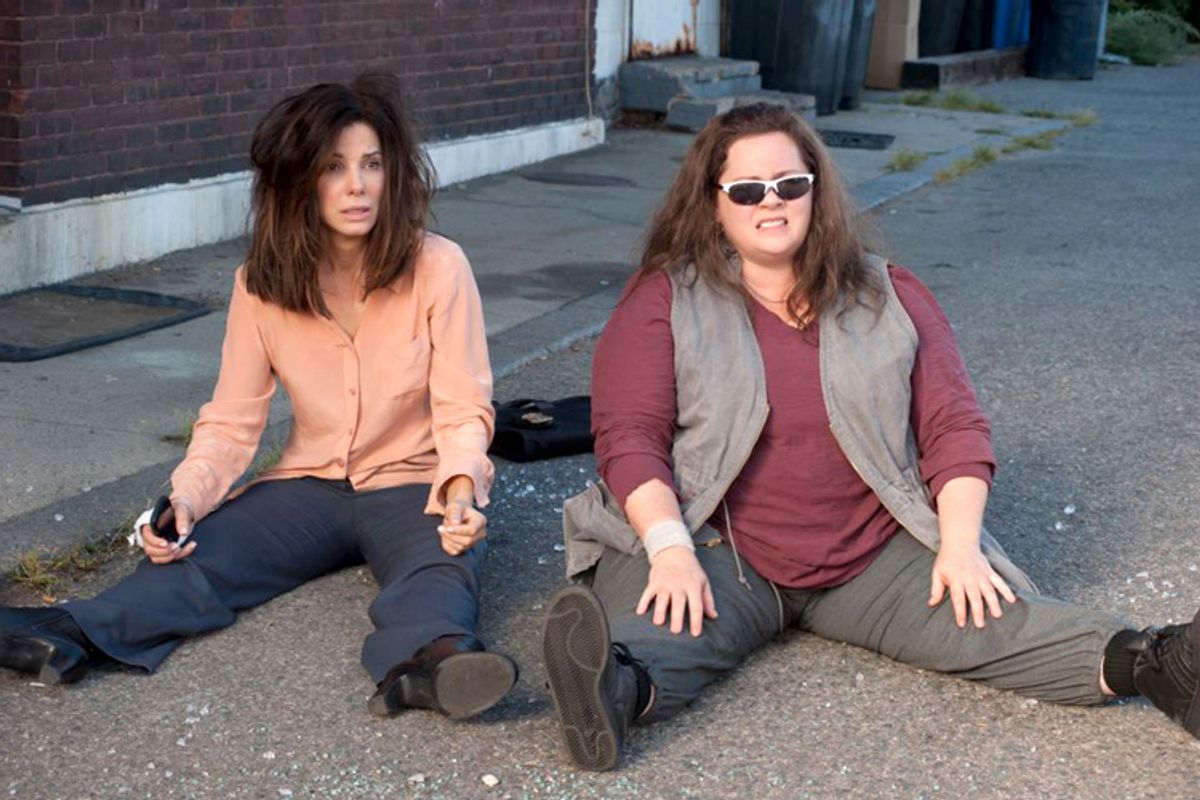 Sandra Bullock and Melissa McCarthy in "The Heat."
--

Nothing quite says female empowerment like violating the civil rights of criminal suspects, am I right? Stop-and-frisk, racial profiling, harsh interrogation and enforcing the ludicrous laws of the drug war – such are the frontiers of feminism explored in “The Heat,” this weekend’s buddy comedy starring Sandra Bullock and Melissa McCarthy as a zany pair of mismatched cops. I know, I know: I’m being a killjoy and deliberately missing the point of the raunchy new woman-centric romp from “Bridesmaids” director Paul Feig, with a screenplay by “Parks and Recreation” writer Katie Dippold.

Well, let’s talk about that, shall we? What is the point of making a movie that’s just like the dopiest, broadest and most reductive grade of guy-oriented comedy, except with women? With “Bridesmaids,” I could more or less understand why many women I respected seized on the film’s release as a feminist moment, and really wanted it to be a hit. (I still didn’t think it was all that great; Leslye Headland’s much-maligned “Bachelorette” was meaner, smarter and funnier.) If Judd Apatow-style, hard-R, bodily-function comedy was where the money was in Hollywood, then the ladies should get to slice some of that cheese on their own terms, and opening up space for female writers, directors and producers to do their work with bigger budgets could only be a good thing.

To root for “The Heat” as a feminist breakthrough, you have to reiterate all the same arguments, with the proviso that this is a much less interesting and original film – basically a hit-and-miss sketch comedy with some decent laughs but not much plot – trying to reclaim a historically moronic genre that makes the wedding farce look like Shakespeare. (Come to think of it, a lot of Shakespeare is wedding farce.) The most interesting aspects of “The Heat” are its metadata, you might say: Both lead actresses are over 40 (Bullock will turn 50 next year), suggesting that Hollywood’s ironclad rules about female age are beginning to crumble; McCarthy continues to open possibilities for larger women as movie protagonists rather than figures of fun (and this is a much better setting for her than the execrable "Identity Thief"); this could be the opening shot in a volley of female buddy movies, with sexual or romantic subplots relegated to the background.

I salute “The Heat” on all those fronts. But this is a movie, not a PowerPoint presentation by San Diego State professor Martha Lauzen, the intrepid watchdog of sex and gender in Hollywood. And as a movie, it’s a mixed-up and frequently uncomfortable experience. I’m pretty sure that Feig and Dippold have no ideological intentions when it comes to their depiction of crime and police work; they’re only thinking about the conventions of the cop movie. But those conventions are ideological, not to mention inherently reactionary, so we get what is meant to be an endearing comedy about two prickly, loner career women who have internalized the vicious, macho culture of police work. They’re very different models of adult womanhood who join forces -- to borrow the vernacular of Shannon Mullins, the tough Boston street cop played by McCarthy – to cock-block the Fourth Amendment.

There’s an edgy but rewarding chemistry between Bullock and McCarthy that makes me wish they were attached to a less foul-tasting premise. Dippold’s script delivers numerous zingers, largely in the form of foulmouthed, irascible ranting from Mullins, who leaves her fellow cops, the criminal class, her ex-lovers and the rest of Boston’s male population trembling in fear. Bullock’s character, Sarah Ashburn, is a bit more central-casting: She’s a divorced, seemingly sexless and relentlessly driven FBI agent who wears dreadful pantsuits and doesn’t recognize that she’s universally hated. (When Ashburn tells Mullins she used to be married, the latter pauses a beat and then asks: “Was he a hearing man?”) It may almost be worth the price of admission to hear Bullock utter the line (in response to an extended allegorical insult about her lack of sexuality), “That’s a misrepresentation of my vagina.”

When these two are just antagonizing each other, alienating other officials from numerous law enforcement agencies, getting hammered in the inevitable dive-bar sequence or tangling with Mullins’ cartoonish Irish-American family, “The Heat” can be highly agreeable, in loose-limbed, pointless fashion. One could definitely make a version of this movie that pushed in a mildly transgressive direction by not having Ashburn and Mullins run down a low-level drug dealer with a car, repeatedly threaten to shoot detainees in the crotch and finally drop an unarmed suspect off a building for no particular reason. (Then there’s the remarkably ill-considered moment when Mullins responds to accusations of racist conduct by claiming that nine out of 10 guys she sleeps with are black, as if that were actually an answer.)

You could steer away from depicting gross misconduct as funny, or you could make those things – along with the movie’s drug-war setting and surprisingly high body count – mean something, by introducing a little dramatic weight. Instead, Dippold’s screenplay seems driven by a confused machismo, as if she feels the need to assert that women on the screen, behind the camera and in the audience can be just as morally reckless as men. Well, OK, they can! The victories of progress come in all shapes and sizes, but I have to say this one is really, really small.