"White House Down": Destroying America in order to save it 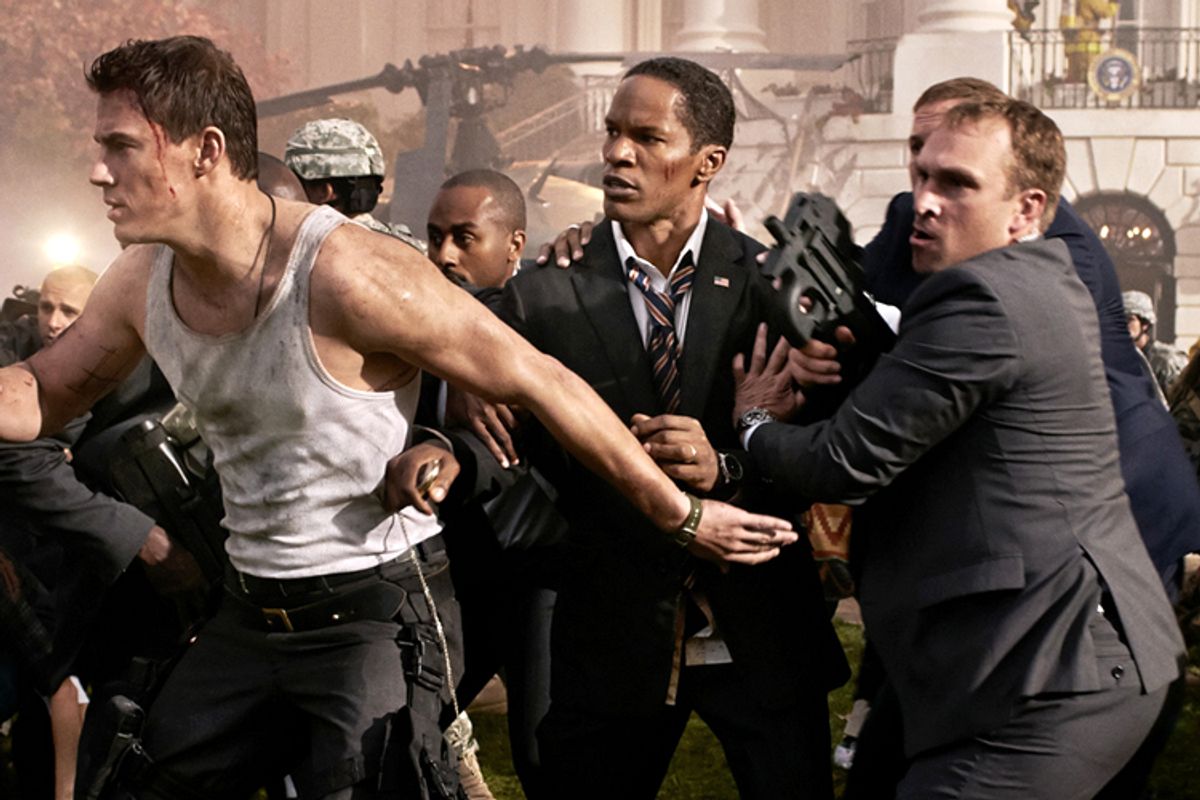 As gristly, undigested globs of American fear, American hope and semi-justified American paranoia go, “White House Down” is both highly entertaining and perfectly timed (in a way that can only be accidental). This ripping and ridiculous yarn from disaster-movie king Roland Emmerich (he of “Independence Day,” “2012,” etc.) is about a right-wing coup d’état staged against an African-American president who has vowed to take down the “military-industrial complex.” No, seriously! And he kind of says it like it’s a new idea! All in all, the movie is something like an MSNBC remake of “Die Hard” mixed with “Les Misérables” (minus the singing) mixed with a wishful-thinking version of Barack Obama in which he personally takes out Serbians and white supremacists with an RPG. Oh, and just a little bit of “Home Alone in the White House.”

Of course, as played by Jamie Foxx, President James Sawyer isn’t exactly Obama, despite the intellectual demeanor, the sticks of Nicorette and the elegant fashion-plate first lady (Garcelle Beauvais, who should’ve been given more to do). Sawyer is more like a black president who’s actually from Chicago, instead of being a prep-school kid from Honolulu. He’s a bit more White House down. (I am so sorry. I couldn’t stop myself!)

Anyway, not only has Sawyer announced a plan to sign a peace agreement with Iran and remove all United States troops from the entire Middle East, he also intends to expose all the American arms manufacturers who’ve been double-dealing with repressive regimes all over the world. Jesus H. Christ! First of all, no president could or would really do those things – by the time you get elected, you already understand there are some places you just don’t go. But yeah, that probably would provoke exactly the kind of right-wing screaming meltdowns and creepazoid paramilitary counterattack we see in the movie.

There’s not a whole lot of realism to James Vanderbilt’s screenplay for “White House Down,” amid the ludicrously inept security around the president, the motor vehicle chases across the White House lawn, the flag-waving little girl who saves America and an ingenious constitutional crisis that no one’s ever thought of before, involving multiple overlapping and theoretically legitimate presidents. But the essential climate of the movie – the climate of hysteria, dysfunction and mendacity, backed up by an enduring, essentially optimistic and arguably idiotic culture of popular patriotism – that feels strikingly authentic to our historical moment.

Just as Sawyer is on the phone with House Speaker Raphelson (Richard Jenkins), who lacks the nucular-orange glow of that office’s current occupant, a bomb in a maintenance cart takes out the upper two-thirds of the Capitol dome. Emmerich is known for destroying the landmarks of human civilization in his movies – I guess he just couldn’t resist including a gag about “Independence Day” in the White House tour seen here – and let’s say this: He’s gotten really good at it. The mixture of digital and optical effects in “White House Down” is largely seamless, and it’s nearly impossible to tell when he’s using real Washington locations, when we’re on set at look-alike buildings in Montreal and when the whole thing is zeroes and ones. But the Capitol bombing is really just a diversion, since an entire tactical squad of scary paramilitary dudes has been smuggled into the White House, disguised as technicians refurbishing the private movie theater. (Yeah, there is an explanation about how these guys and all their gear get into one of the most secure buildings on earth, though I wouldn’t call it convincing or adequate.)

Fortunately for the free world, there’s a buff but likable screw-up on hand, along with his attitude-laden preteen daughter! Since this is an American action movie, that’s obviously more than enough to take on a team of heavily armed Special Forces renegades (led by Jason Clarke, the torture expert from "Zero Dark Thirty") who have executed the president’s entire Secret Service detail, slaughtered Marine guards and Capitol police officers by the carload, and are loading Javelin surface-to-air missiles onto the roof. Actually, it is enough, in the sense that Channing Tatum is so cozy and comfortable as John Cale, an off-duty Capitol police officer whose hardass one-time high-school classmate (Maggie Gyllenhaal) has just rejected him for a Secret Service job, that he gives this outrageous fantasy a human center.

Cale is strictly an archetype from the action-cinema playbook – did Vanderbilt knowingly name him after the avant-garde musician and former Velvet Underground member? – but Tatum inhabits the role with his low-key charm and physical presence in a way that feels convincing while being almost entirely devoid of specific content. I guess that’s the definition of a movie star: Tatum’s Cale is appealing and accessible mostly because we can project whatever we want onto him. Cale will be damned if he’ll allow a bunch of guys with nasty tattoos and “Deliverance” haircuts to seize or kill the president, and anyway his plucky 11-year-old (Joey King) is somewhere in the corridors of the White House, uploading cellphone video of the terrorists to YouTube.

Emmerich’s movies have long capitalized on the conflicted or confused desires of moviegoers: On one hand, we’re delighted to see the Capitol blown up and the White House destroyed; on the other, we yearn for heroism, a happy ending and an American renewal. There’s a lot of that double-edged quality in “White House Down,” including the fact that the team seizing the White House includes a former NSA techno-wizard (Jimmi Simpson) who even looks a little like Edward Snowden. Both the vice president (Michael Murphy) and Jenkins’ House speaker (constitutionally third in line) seem suspiciously eager to get their hands on the reins of power and undo Sawyer's peace deals; in their command bunker at the Pentagon, Gyllenhaal’s Secret Service head and the chairman of the Joint Chiefs (Lance Reddick) squabble like schoolgirls.

Vanderbilt and Emmerich can’t come up with some surprising reason why a bunch of wackos would want to seize the White House – what you’re guessing, right now, is probably correct – but the journey, plot-wise, is reasonably diverting and it’s a relief to see a movie that delivers action scenes where objects and human bodies appear to possess weight and you can follow what’s happening. (“Man of Steel” was a particularly egregious offender on those counts.) This piece of midsummer madness is undeniably silly and delusional, a dire political fable told as tongue-in-cheek pastiche. But it delivers a lot of contradictory things we want: We want to see America destroyed and we want to see it saved. We want to see priceless White House antiques get smashed and also get a little weepy about American history. Oh, and we want to make fun of the media, which unanimously describes the White House seizure as an al-Qaida attack. That’s a lot of good things, wrapped up in a delicious package of stupid.