Why are TV serial killers so sexy?

Serial murderers on the small screen are smarter, better-looking and more in control than ever before 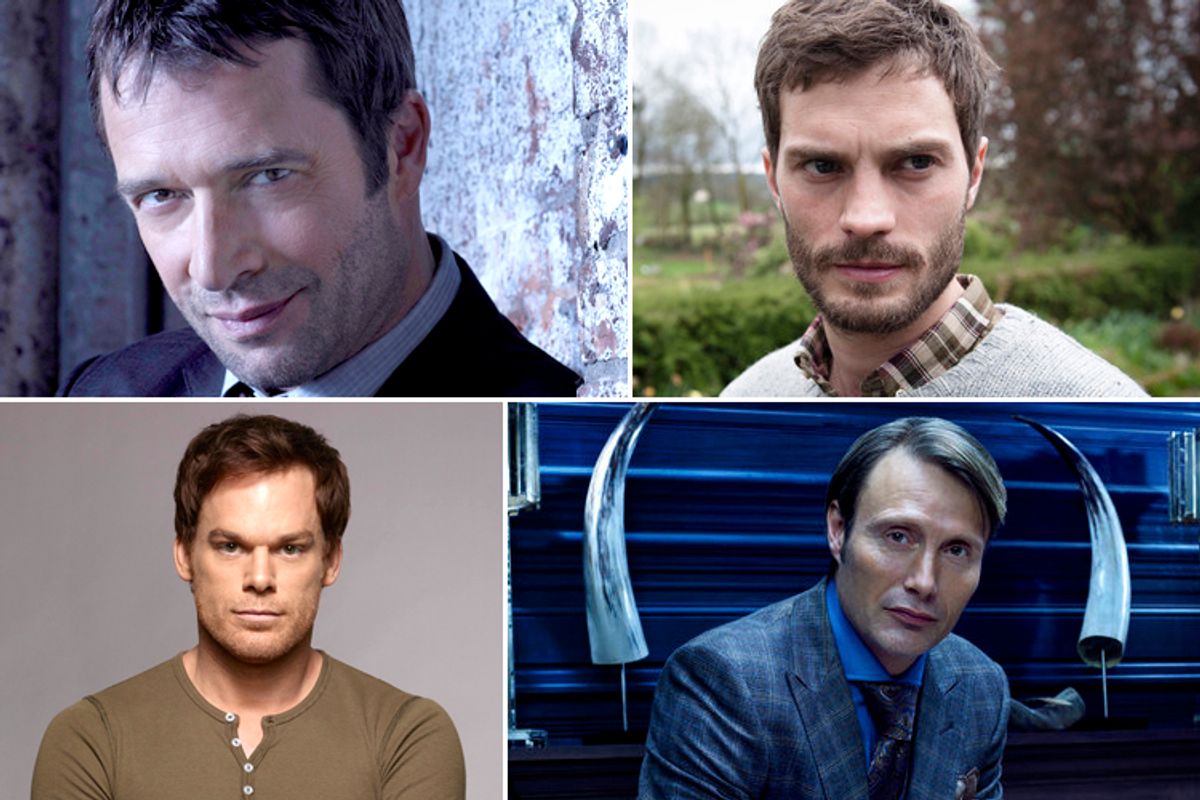 Handsome, dangerous, mysterious men with an unquenchable thirst for blood have never been more common on television, and I am not talking about vampires. Serial killers are having a moment.  “Hannibal,” “The Following” and “The Fall” star a trio of genius dreamboats who easily elude the more frail humans trying to catch them. “Dexter,” featuring the semi-sympathetic serial killer par excellence, returns to TV on Sunday night. On “The Killing” a pair of detectives are looking for a man who has murdered over a dozen teenage girls, slicing their throats and chopping off a finger, while on FX’s forthcoming “The Bridge,” another pair of detectives will look for a killer who has meticulously planned murders that also speak to pressing social issues. “American Horror Story” featured a guy who skinned people and wore their faces. NBC just premiered “Crossing Lines,” about a team assembled to catch the worst international serial killers, while on CBS, the FBI profilers on “Criminal Minds” do the same for domestic maniacs. And procedurals like ‘The Mentalist,” “Criminal Intent, SVU,” “NCIS,” “CSI” and “Bones” collectively offer up multiple murderers on a nearly weekly basis.

It’s not just that serial killers have never been so popular — they have also never been so smart, sexy, in control. What happened to vampires over many decades — transforming from alluring but terrifying, deformed creatures of the night who want to suck your blood into soulful, gorgeous matinee idols who refuse to suck your blood — is now happening to homicidal maniacs, who have gone from looking like the crazed BOB of "Twin Peaks" or the assemblage of freaks and weirdos that appeared on “The X-Files” to “Hannibal’s” Mads Mikkelsen, a man with a face so gorgeously angular Picasso could not distort it.

Sociopathy has become like consumption, a dangerous but romantic affliction that allegedly makes its possessor more passionate, more brilliant, more artistic and better-looking, even as it ties him inexorably to death. The killer in “The Fall,” played by former underwear model Jamie Dornan, draws women in his notebook and, upon their deaths, bathes and frames them in a scene so exquisite he will masturbate to it later. The psychopath and cult leader in “The Following,” played by the dashing James Purefoy, is lit from within by a passion for Edgar Allen Poe and desire to bring the "message" — “insanity as art” — to life. Mikkelsen’s Hannibal Lecter is a pure aesthete, his murder an impeccable art form, as gorgeous and well-crafted as the cannibalistic meals he so carefully prepares. The slayer on “The Killing” assembled a mass grave site where corpses in red body bags sat on the water like lily pads. “The Bridge’s” serial killer commits murders that are also performance art.

What is going on here? Serial killers are, obviously, extraordinarily good at violence, making them a part of the larger trend that has turned TV dramas, in the words of Time's James Poniewozik, "reflexively brutal." “Walking Dead,” “Game of Thrones” and “Breaking Bad” may not, as  “Hannibal” did, contain a totem pole of corpses, but the Red Wedding, Gus Fring’s face and zombie carnage are also very capable of giving a child nightmares. Violence, according to Kurt Sutter, the creator of the sometimes very violent “Sons of Anarchy,” is a way to make a show “noisy,” to help it “cut through everything else that’s similar to it. So there needs to be something, whether it’s life or death – something with high stakes.” There is nothing more high-stakes or noisy than a serial killer. After all, to invert a saying, "When you die on television, everyone can hear you scream.”

On procedurals like “Criminal Minds” or “CSI” audiences are invited to thrill at the corpses of beautiful dead girls, the cameras lingering in faux-outrage that enables titillation. So long as the good guys win at the end of the hour, one can eye the gorgeous blond girl naked on an autopsy table or listen to a story of rape without too much guilt or thought, rolling around in the prurient muck without getting dirty.

In contrast, at its best, “Dexter,” a show about a serial killer who kills serial killers, gets its audience filthy when they're not looking. Viewers have sympathy for Dexter, a murderer who scrupulously follows certain rules, but at key moments the show makes them confront their affection for him, a man with a dry wit and a terrible childhood who avoids slaughtering the innocent but … still needs to cut people up with a chainsaw. The plastic wrap doesn’t catch all the blood. (Read Emily Nussbaum's piece on the show for a fuller gloss.)

On the new type of serial killer show, audiences are invited to thrill at the violence — so much more baroque and grisly than what typically appears on procedurals — while also identifying with the bad guys. The law enforcement officials, as is popular these days, are flawed heroes— mentally ill, socially awkward, former alcoholics, to name some of their maladies — while the bad guys are the reverse. They're nearly flawless, if only they didn’t go around murdering people. (Instead of antiheroes they are, what, anti-villains?) As my colleague Laura Miller put it in her piece on “The Following,” “While the narrative pretends to condemn and recoil from its serial-killer villain, it covertly encourages us to revel in his powers” by making him so much more physically potent and mentally acrobatic than the broken down character trying to catch him. This season of "Hannibal" ended with the innocent but psychologically unhinged character played by Hugh Dancy, broken and imprisoned, successfully framed by the debonair Hannibal, not a hair out of place, for Hannibal's crimes. (There is more equality between the serial killer, Paul, and serial killer hunter, Stella, played by Gillian Anderson, on "The Fall." Paul is a strapping specimen, but he’s also quiet and stifled, a misogynist loser who gets power through murder. He’s bright, but Stella, whose only flaw is an almost icy hauteur, is his match.)

It should go without saying that serial killers are not, by and large, suave, socially comfortable geniuses with such ordered thinking they can easily avoid the police, the myth of Ted Bundy notwithstanding. The violence these fictional men wreak is not just horrifying and bloody, it is inaccurate. But this particular inaccuracy is powerful — and this, I think, is the key to the current serial killer fad — because it supposes that there exists someone in full control of violence, an enviable skill if there ever was one.

We live in a moment when violence is on the decline, but this fact seems like a basic contravention of lived experience. We are more safe, but feel less safe than ever, largely because of galling, graphic and sudden incidents of extreme violence — school shootings, mass shootings, bombings. Fictional serial killers perpetrate highly planned but often random-seeming acts of shocking brutality: Why this 20-something girl and not the other? Why this block, this house, this city and not another? More than vampires or zombies they are the perfect boogeyman of now because they have power over what we fear most:  the constant possibility of ultra-violence happening in normal places to normal people. At least one healthy, handsome, robust, intelligent and mentally energetic white guy knows how to control bloodshed, even if he does nothing to stop it and everything he can to perpetuate it. And if good people can’t stop him, who can blame them their powerlessness? Who can be expected to stop an uber-mensch?