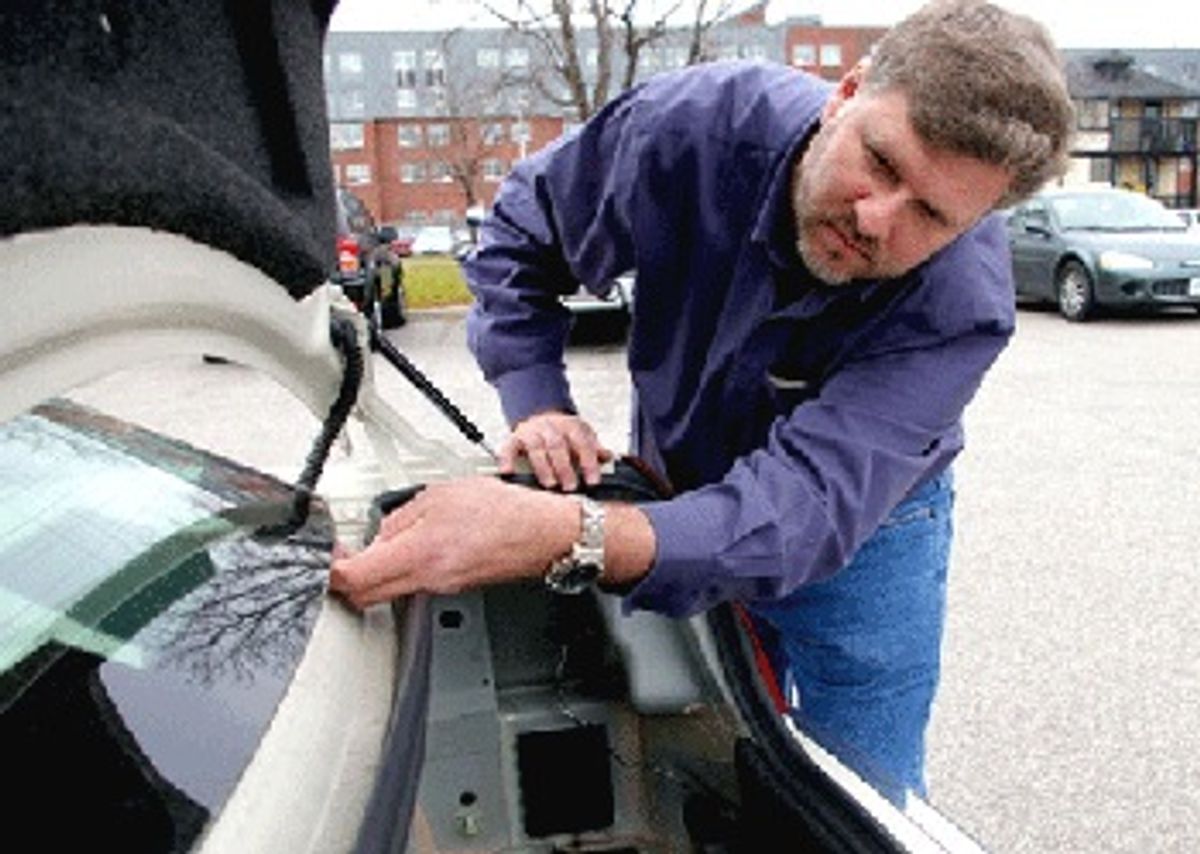 University of Windsor engineering professor Colin Novak works on a prototype for turning a car’s rear window into a stereo speaker. This summer he’ll be turning his acoustics experience to an investigation of the Windsor hum. (UWin Daily News)
--

Gary Grosse first heard the sound at 2 a.m. on a hot summer night in 2009. The air was still and the windows open, and the sound startled him out of slumber. Grosse, annoyed and unable to fall back asleep, jumped in his car and drove around looking for the source of the deep, rumbling pulse that now seemed to suffuse his leafy suburb of Windsor, Ontario, not far from the U.S. border. He ended up at the Detroit River, near the local power plant. Figuring the sound must be coming from the building, he dismissed it as a one-time irritation that would probably soon be fixed.

Sherry Kelly, a resident of nearby LaSalle, first noticed the noise a year and a half later, in the winter of 2011. An accountant with young children, she would stay up late catching up on work while her family was in bed and the house was quiet. “You think, is there something wrong with my hearing?” she says. “You look outside the window because it sounds like a truck idling. If there was a teenager in a sports car parked outside with his music on and the windows up -- it sounds like that.” But she was reluctant to mention the noise to anyone else. “For me, being a professional, you don’t want to step up and have people be, ‘Oh, she’s the crazy one who hears a hum.’”

But she and Gross weren’t the only ones. As people began complaining to local news outlets, they both realized that the “Windsor hum,” as it has come to be known, was upsetting thousands of their neighbors -- vibrating their beds, wrecking their concentration, making their toddlers cranky. Some even blamed it for killing their goldfish. Grosse, a systems administrator for a manufacturing company, started a Facebook page to document reports of the sound and called the Canadian Ministry of the Environment to complain. Kelly wrote a letter to her local Minister of Parliament. The extent of the problem would become clear when a radio station hosted a call-in program for government officials to respond to community questions about the hum; 22,000 Windsor residents jammed the lines.

Things got so bad that in 2011 the Ministry of the Environment instructed Earthquakes Canada, a government agency, to conduct seismic measurements to see if it could explain the hum. Scientists buried four seismometers in different locations around Windsor and compared the data they logged to the timestamps of people’s complaints. “We weren’t 100 percent sure if we would record anything or not,” says Allison Bent, an Earthquakes Canada scientist. But two of the instruments lit up with movement corresponding to reports of the sound. Bent could tell by the speed of the vibrations that they were airborne  -- they would have traveled much faster through the earth -- and she could determine the directions from which they were coming in relation to each station. Diagramming those lines showed that they intersected at the edge of the Detroit River, on the U.S. side, at a place called Zug Island. The Canadians figured that, coordinates in hand, they could simply phone someone on the American side and ask them to turn the noise down.

That was almost two years ago. Despite the efforts of Canadian officials, the hum remains.

Colin Novak, a professor of engineering at the University of Windsor, never expected to find himself embroiled in an international diplomatic dispute -- especially not over a phantom sound so weird that conspiracy theorists have begun blaming it, variously, on UFOs, Planet X, and secret government tunneling. But in April, Canada’s Foreign Affairs office awarded Novak $60,000 to trace the Windsor hum to its exact mechanical source in the United States -- though he wouldn’t be allowed to set foot on American soil (more on that below).

An acoustical consultant for more than 20 years, Novak uses highly specialized microphones to monitor wind turbines for maintenance issues -- detecting, for instance, whether a bearing is giving out in its gearbox. His reputation for precision made him a natural to tackle the Zug Island problem. A peninsula cut off from the mainland by a manmade shipping channel, Zug was once a marsh and had been used as an Indian burial site. Detroit Iron Works installed a blast furnace there in 1902, and the island has been an industrial zone ever since. The surrounding zip codes are now among those with the worst air quality in Michigan. From their side of the Detroit River, Canadians can see brown furnaces and yellow plumes of smoke.

But Zug Island is private property, patrolled by security guards, and at least one of the companies there has refused to give Novak access for his acoustical tests. In the interests of diplomacy, he wouldn’t tell me which company or companies barred him from the island, so I called the ones that the Michigan Department of Environmental Quality monitors for air pollution on Zug, all of which are related to steelmaking. Only the two biggest said they knew anything about the Canadians' noise concerns. EES Coke, a subsidiary of DTE Energy, operates a facility on the island where coal is heated at high temperatures to produce an ingredient in steel. A DTE spokesperson told me the company doesn’t use any equipment capable of creating the vibrations that accompany the hum. A representative of U.S. Steel, which operates a steel mill on the island, told me the company is “aware that the community of Windsor believes that the hum is coming from Zug Island.” But, she said, “We don’t believe it is related to our operation.” She said U.S. Steel would consider requests to allow researchers into their facilities to look for the hum, depending upon “the request and the scope,” but wouldn’t say whether U.S. Steel was refusing Novak access.

Even if Canadians do figure out the source of the sound, there’s no U.S. government agency with the capacity or responsibility to regulate nuisance noises like the hum. The Environmental Protection Agency deemed noise a pollutant in 1972, but in 1981 it disbanded its Office of Noise Abatement and Control and assigned the majority of noise complaints to state and -- most commonly -- local governments. Michigan doesn’t have state noise laws, and the city of River Rouge, which includes Zug Island, has declined to spend tax dollars investigating the noise’s source because its residents don’t seem to hear it.

There’s no definitive evidence that the hum is harming the health of people or animals in Windsor, but Gary Grosse says he knows of neighbors who have begun taking medication to alleviate hum-induced stress. “We don’t give enough credit to how noise can impact our lives,” he says. During the periods when the hum was most frequent in the past, he says, “we really felt like we were prisoners in our house and we were being invaded. You would get headaches, you would feel nauseous, sleep-deprived, and the stress levels, of course, are going through the roof.”

Though noise pollution is invisible, research shows that exposure to loud or persistent sounds can affect the health of humans and wildlife just as dramatically as other contaminants. Persistent sounds -- from traffic, planes, and industry, for instance -- have been shown to disrupt sleep, increase stress hormones, blood pressure, and the risk of cardiovascular disease, and lead to the use of psychotropic medication. Noise can also impair memory and concentration and influence social behavior, triggering aggression and dampening moods, according to a World Health Organization report.

As Windsor residents grow increasingly desperate, acoustics maven Novak holds their best hope for respite. Right now, he has two sound-level meters planted in Windsor, streaming the frequency and amplitude -- the sonic signature -- of the sounds they pick up to a server and recording any, including the hum, that are louder than a set threshold. “It’s a very low-frequency, high-amplitude rumbling,” he says of the hum. “You feel the sensation as much as you hear it. It tends to rattle the windows and the walls of the building.” But, he adds, that’s in Windsor. It’s quite possible that the sound is inaudible at its source, which could be as many as five miles away.

The hum is 30 hertz -- just 10 hertz above the lowest frequency most people can hear -- and humans tend to perceive medium frequencies most distinctly. That means that if medium and low frequencies are present together -- say, in a whooshing, booming, clattering factory -- the medium ones override the lower ones. But lower frequencies can travel farther, and, if they reach a quiet neighborhood, become audible. That appears to be what’s happening with the hum, and why folks on the U.S. side of the river don’t seem as bothered by it.

Novak’s plan is to use the data he’s recording to guess when he’s most likely to hear the hum and what its sonic signature looks like. Then, at the end of July, he’ll borrow a boat from his university and take his “pentangular array” out into the river. The array is a camera mounted on a tripod at shoulder height with five poles protruding from it like the arms of a giant starfish. Dotting the length of each pole are six microphones. If he can float within 1,000 feet of the source of the hum, while it’s happening, he can take a “picture” of it with the camera. Much the way thermal imaging can map heat variations in different colors, the picture will show him exactly where the sound is coming from.

“If we could say that it is this piece of machinery that’s emitting that frequency signature, we would then be able to identify it to the people who own the equipment, through the appropriate political sources,” Novak says. He hopes he can capture the sound in fewer than five nights on the river. He plans to have a preliminary report ready in September that, if all goes well, will allow Canada to politely ask the owner of the hum-generating machine to please do something to muffle it. But success, he acknowledges, is far from certain.

“It’s a bit of a hunting game, if you will,” he says. It is also his array’s maiden voyage. “We’ve never put it on a boat before. But we’ve never had the need to.”