Greeting cards for the terminally ill are a great idea 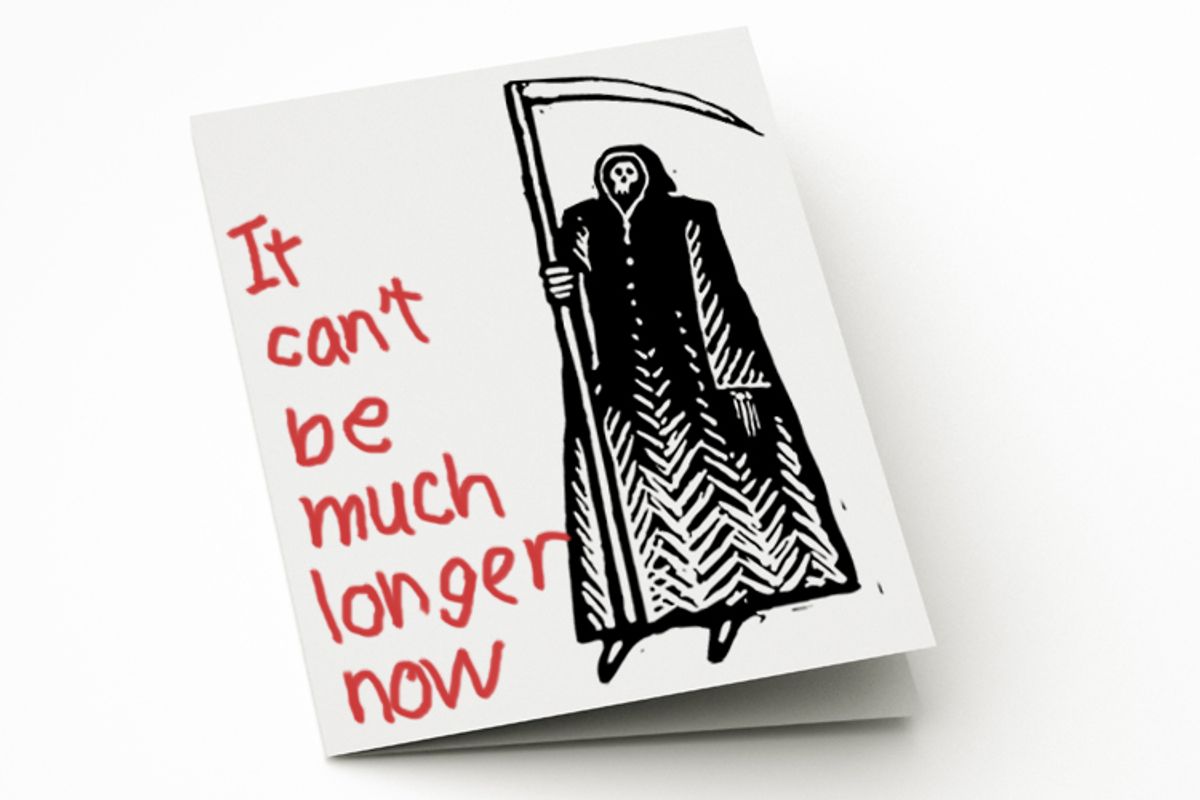 Even in an increasingly paperless world, there are times when an e-card just won't do. There's something about the sound of an envelope opening, the feel of paper in your hand. It's estimated that Americans purchase 6.5 billion cards a year. Cards to say "Happy birthday." "I'm thinking of you." And "Thanks for being a pal while you're dying."

As the Economist first reported over the weekend, greeting card behemoth Hallmark is preparing to roll out some bold new messages in 2014 – including cards that take on tough topics like terminal illness. "Our paths came together in this life," reads one. "You're in some of the best memories I have and you always will be."

It's been a long time since greeting cards stuck strictly to generic platitudes about hanging in there, baby. Fifteen years ago Hallmark rolled out its first suicide condolence cards, to offer sympathy for "when someone we love flees from life." Six years ago, the card company introduced its "Journeys" line of messages for issues like "depression, eating disorders, and cancer." Finally, consumers at a loss for words over a friend's miscarriage or infertility could pick up a greeting to say, "I know how much a child would mean to you. I'm still hoping and believing for you." At the time, AdWeek's Tim Nudd described the gambit as "unbearably corny" and "hackneyed," a not entirely unfair assessment of a verse like "Cancer is a villain who doesn’t play fair … but it can’t dim your spirit, and it can’t silence prayer." Hallmark still offers "cancer support" cards, by the way, with messages that promise "Cancer is not who you are – it's what's happening to you." And two years ago, Hallmark added a new line of job loss sympathy cards, featuring images of wise brown owls and sad pigs trotting toward the unemployment office. "Loss of a job, like any loss, is a grieving process," explained the company's creative director Derek McCracken.

The company says its latest direction has been spurred by research it has conducted with grief counselors. There are cards for "tough times" and "extended illness," cards that acknowledge a parent's Alzheimer's and the lingering grief "after the last casserole is finished and the phone stops ringing." And now, in what seems like the next logical progression, cards that acknowledge when the recipient isn't going to get better.

Maybe a $3 sentiment written by some stranger in Kansas City sounds like a pretty shallow way to communicate love and support during an immense, life-changing experience. But I can tell you this: in the past few years, my friends and I have gone through all the things you never thought there'd be a card for: suicides, eating disorders, job losses, depressions, parental caregiving, disease, PTSD, death, death, death. There have been plenty of times when the very best among that group, the brightest and most articulate, were struck entirely at a loss for words. I have kept every card, every letter I received from both of my bouts of cancer. I treasure them, even the corniest of them. They remind me of every gesture of solidarity and compassion. And I'd take a card over silence any day of the week. In the darkest moments of life, few among us know exactly the right thing to say or do. Those who do are heroes. The rest of us need help sometimes.

That's why a card isn't always just a hokey little set of platitudes picked up at the drugstore. It can be an acknowledgment of something that's often very hard to acknowledge. We live in a world that denies disease and mortality; we're encouraged to put on a brave face and not make everybody else uncomfortable. A face that isn't corny – it's considerably braver and more innovative than so much of forced cheerleaderism around difficult topics. It's sure as hell gutsier than ignoring the suffering of others because it's too awkward and strange. And it doesn’t have to be the sum of the conversation – it can be just the beginning of it.