I should have slept with Philip Roth

"Would you like to taste one of my cherries?" the great writer asked me, flirtatiously. And then I blew it 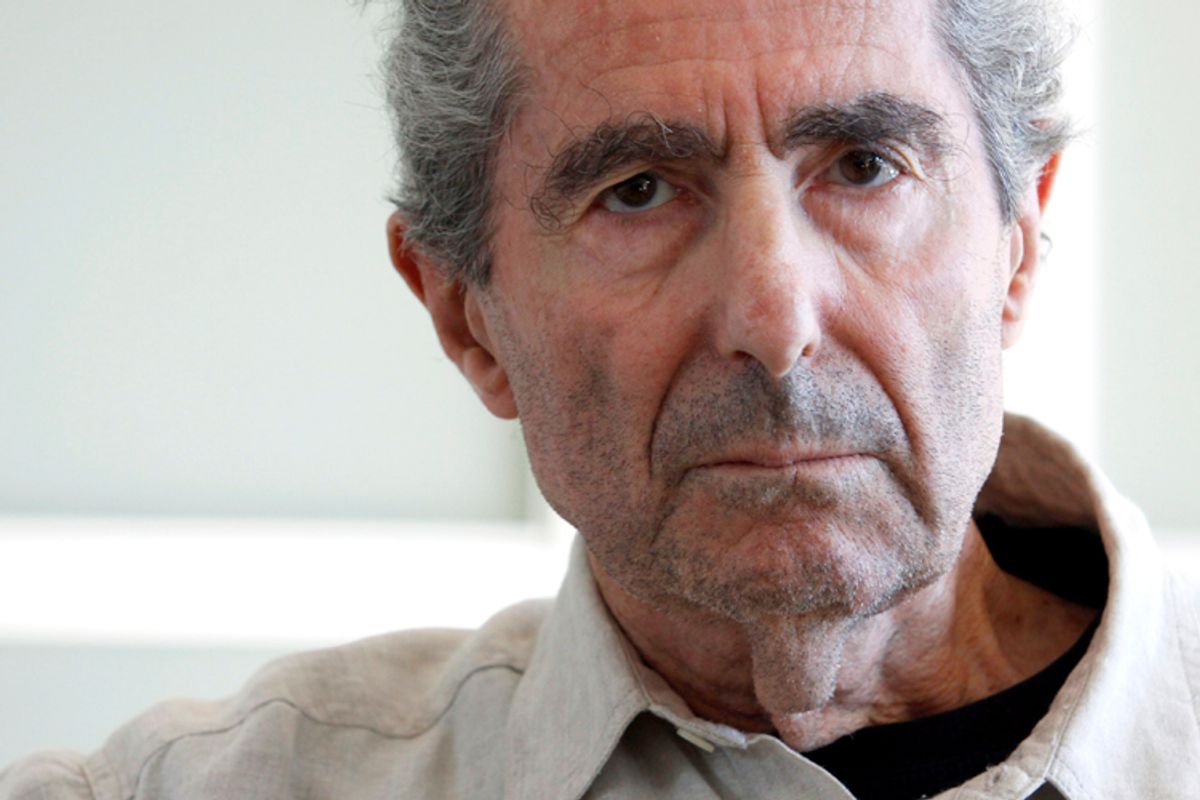 Excerpted from "On My Knees"

One of the perks of my job -- I got to go to really interesting events and meet really interesting people all the time. Some people were more interesting than others, of course, and I'd learned that meeting people you admire is often a bummer. They are generally shorter, fatter and uglier than you imagined, but that's neither here nor there.

In this particular scenario, I was being introduced to Philip Roth, my mother’s favorite writer, whom I had heard her refer to as “the literary lion.” And while I’ve never been particularly starstruck, I flipped when I found out Roth was going to be there. Next thing I know, a mutual friend takes me by the hand, drags me over to Roth, and introduces me to him in this fashion: “Philip. Zis is Periel, she is a grrrreat writer.”

I could not imagine anything more humiliating in the entire world. I wanted to curl up in a hole and die. Adding insult to injury, a friend of Roth’s who was lingering around us, nodded toward Roth and said to me, “So you like him, huh?”

In attempt to salvage whatever miserly bit of self-respect I had left, I said, “Well, I don’t know him, so I can’t like him, but I do like his work.”

This was an out-and-out lie. I had never read a single word Philip Roth had written. Roth, for his part, was sitting at a table with a large bowl of cherries in front him. He looked up from his cherries and stared me up and down, his gaze lingering for a moment too long on my chest. I wasn’t wearing a bra and I wondered (and secretly hoped) if in the dim lighting of the restaurant he could make out the faint outline of my nipples. Even at his advanced age, he was quite attractive. I could just imagine my mother’s reaction if I told her that I had had sex with Philip Roth.

Roth looked me dead in the eyes and said, “So, you’re a great writer, huh?”

I returned his stare and said, “I like to think so.”

He looked back down at his bowl of cherries, then back up at me.

He said, “Sit down.” And he nodded toward the chair across from him.

I have never followed instructions so quickly in my life.

As I sat, I thought, all the torture and bullshit has finally paid off. I could already envision Roth’s endorsement of my next book. Maybe he would say something like, “Periel Aschenbrand is the most brilliant young writer I have ever encountered.” Or, “Brilliant, screamingly funny, deeply moving—everything you could hope for in a book.” Obviously he wouldn’t say something so banal, but that wasn’t the point. The point was that I was hanging out with Philip Roth, one of the important living literary figures of our time. And that was a big fucking deal.

I was trying to make a good impression and sound mildly intelligent, so I started talking about French critical theory. This was definitely a gamble since I don’t actually know anything about French critical theory. Had I read "The Dying Animal" before I met Roth, I would have known this was a colossal waste of time. But I hadn’t read "The Dying Animal" before I met Roth because I hadn’t read anything by Roth before I met him. As it turned out, it didn’t really matter what I was talking about because Philip Roth spent the vast majority of the time I was with him alternately talking about his great love for cherries and staring at my tits.

While I was droning on about the great French feminist philosopher Monique Wittig, who is both famous and obscure enough that I thought I could get away with it, Philip Roth interrupted me, “I have a question for you.”

I was already formulating my answer. Yes, Mr. Roth, of course, I would be thrilled to have you write the foreword of my next book. I look at him expectantly, the way I imagine a dog would look at its owner right before the owner is about to fill its bowl with food. I was anticipating a very serious literary question.

Trying not to skip a beat, I licked my lips and batted my eyelashes. “Who doesn’t like cherries?” I asked as I smiled sweetly.

Roth got a devilish twinkle in his eye, “Would you like to taste one of my cherries?”

He pierced a cherry with his fork. I opened my mouth, and Philip Roth, one of the greatest writers maybe ever, popped a cherry into my mouth.

It was actually revolting. The cherries were preserved in some heavy, sugary red liquid. They tasted like cough syrup. But hey, who was I to ruin an old man’s good time?

The whole thing was pretty sexy and I kept wondering if he was going to ask me to come home with him or something but he didn’t. He did, however, tell me to “keep in touch” and wrote his address down on a little piece of paper for me. I tucked it snuggly into my bosom and then gave him a sweet, soft kiss good-bye. On the lips, no tongue.

The second I stepped foot outside, I called my mother. I was like, “You are never going to believe who I was just with!”

Me: “You shouldn’t be. You’re going to be thrilled. Philip Roth!”

Me: “It was unbelievable. It was pretty pornographic, too.”

My mother: “What does that mean, it was pornographic?”

Me: “It means that I probably could have slept with him if I wanted to.”

My mother: “Oh my God. I can’t believe this! That’s terrible!”

Me: “Why is that terrible? I thought it was wonderful. I’m actually sort of regretting that I didn’t go home with him. Or to a hotel, that probably would have been better.”

My mother: “Peri, are you telling me the truth!?”

Me: “Yes! I swear! I literally just walked out of the restaurant. He even gave me his address.”

My mother: “You’re telling me that Philip Roth just tried to have sex with you?”

Me: “He didn’t exactly try to have sex with me, but he was very flirtatious and I could have probably had sex with him if I wanted to. That’s all I’m saying.”

My mother: “Well, I think that’s terrible. A man of his stature shouldn’t behave like that.”

Me: “Behave like what? I just told you he didn’t do anything.”

My mother: “Yes, but you said he was flirtatious and I would expect him to behave in a more dignified fashion. After all, he’s a professor!”

Me: “What does that have to do with anything? Aren’t all of his books totally pornographic?”

Me: “You don’t think I made a mistake by not having sex with him?”

My mother: “Oh my God. Peri, please. No, I do not think you made a mistake by not having sex with him.”

Me: “He could catapult my literary career.”

My mother: “You can catapult your literary career by yourself with your own talent, not by sleeping with Philip Roth! And isn’t he in his seventies!”

Me: “Yeah. So what? Picasso was forty-five when he met Françoise Gilot and she was seventeen.”

My mother: “Did he catapult her career?”

My mother: “He did not catapult her career. He catapulted her notoriety.”

Me: “So you’re against sleeping your way to the top?”

Me: “Well, I’m not and I think I may have made a big mistake.

I really think I should have had sex with him.”

My mother: “Oh, you are talking such nonsense. Why don’t you read one of his books instead of wasting your time with this idiocy!”

My mother: “You are not to sleep with Philip Roth! Do you understand me!?”

The next day I bought every single Philip Roth book I could find. After I finished "Portnoy’s Complaint," I cursed myself again for not sleeping with him. I decided to send him a token of my appreciation and I had the perfect idea for a present. I quickly discerned that Traverse City, Michigan, was world renowned insofar as cherries were concerned. I ordered an enormous crate of them to be delivered to his home and was very pleased with myself.

Once I received confirmation that the package had arrived, I began to obsessively check my mailbox for a thank-you note. I imagined Roth would say something to the effect of how sexy and funny I was, how much he enjoyed meeting me, that he would love to read my book. Whatever he would write, I was certain, would be charming and I would, perhaps, even find a lovely antique frame to display it prominently in my home, if I ever got one.

When people came to visit, they would inevitably ask me what it was. I, of course, would act distracted. “What?” I would ask. They would have to repeat the question and in repeating the question, I would know that they were paying full attention. Only then would I answer. I would pause and strain my neck as though I needed to get a better look at what they were talking about. Maybe I would even giggle a little. Casually I would say, “Oh, that, I had no idea what you were talking about. That’s just a note from, um, Philip Roth.”

Of course, this would impress them immensely. “You know Philip Roth?” Very nonchalantly I would say something vague and interest piquing like, “We’ve spent a little time together,” or maybe even, “We have a mutual friend . . .”

Even though this scenario was absurd, I took solace in my fantasy. Since all else had gone to shit, at least I would have this to remind me of how far I had come. And also because I have never followed the rules, per se, I have taken a lot shit from a lot of people throughout the course of my life. My parents have always been extremely supportive—albeit a bit skeptical—of my decisions. But there are many other people—my parents’ friends, other members of my family, the list goes on—who have just been waiting for me to land on my face and crack my skull open for not being more obedient.

It’s always been the same story: “Peri is doing what? Peri is going where?”

Or, as Uncle Bark once said, “You are building your future on a pile of sticks.”

I don’t blame people for this reaction; we have been bred to be sheep but I refuse to kowtow to convention. It’s too boring. In my mind, not taking risks has always been a bigger risk than taking them. The sense of security that comes from jobs that confine you to a beige cubicle farm is false. I’d always known that but when Lori’s brother, Guy, was killed on September 11, I became more convinced than ever.

And so sometimes it’s nice to say to all of the people who have tacitly agreed to live their lives in the most banal, mundane, expected way possible: “And by the way, fuck you. I may be illegally squatting in my dead grandmother’s apartment in the East Village, but at least I have a letter from Philip Roth on my wall.”

After I sent the cherries, I waited a week.

Eventually, it became painfully obvious that I was waiting in vain. I never even got so much as a cherry pit from him. I don’t care who you are, if someone sends you two hundred of the best cherries in America, the very least you can do is send them a fucking thank-you note.

And really, who am I to argue?