"The Killing's" breakout character is a butch teenage girl

Bullet is not a character you see on TV very often, and she's one of the best reasons to watch the show 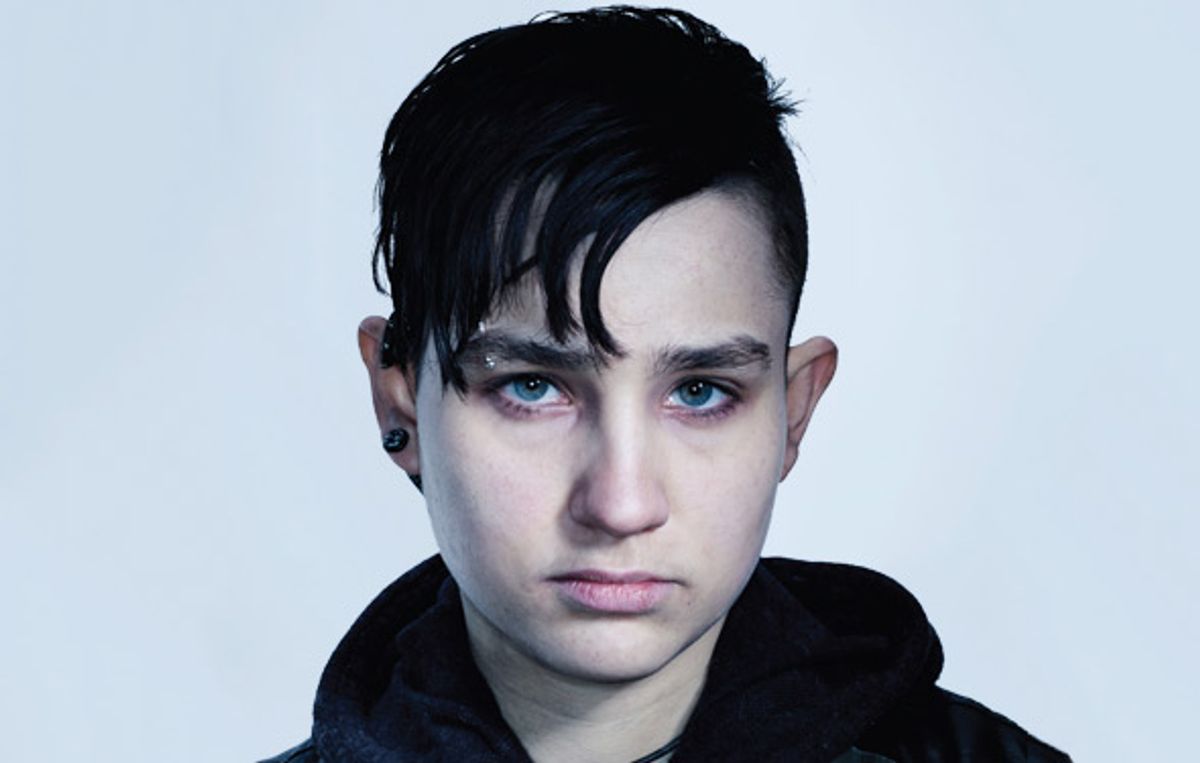 AMC’s “The Killing” is halfway through its third season, and so improved that I find myself in the unfamiliar position of wanting to give it a compliment. (It’s not so improved that I only want to give it compliments: On last night’s episode, detective Sarah Linden made a major breakthrough in a case she had worked three years ago— a case she had cared so deeply about it had driven her crazy, but one in which she'd apparently neglected to identify the one eyewitness.) This season’s case has detectives Linden and Holder trying to catch a serial killer who preys on street girls and has already sliced the throats of more than a dozen of them. This crime has given “The Killing” entrée into the lives of Seattle street kids, homeless teenagers and runaways who are moving from shelter to squat, but are not — and this is the great part — just trying to survive, they are also navigating the robust social world they have created for themselves. These kids have lives, feelings, generous and selfish instincts, an entire social web. They are not just cautionary tales, though they are that too. Their world is bleak, but it’s not just bleak.

One of the kids, Kallie, has been missing since the first episode -- in all likelihood, she's dead. Another is Bullet (Bex Taylor-Klaus) and she’s the reason I’m writing this piece. Bullet is not a character you see on TV very often: She’s a teenage lesbian, very butch, the sides of her head shaved, her dark hair coming down in a hank toward her eyes. (It’s never been discussed why Bullet is living on the streets, but it seems likely her sexuality got her kicked out of whatever house she was living in.) Bullet is smart and competent and generous and tough — or she certainly wants to be seen as tough. Early on, when Bullet encounters Holder (Joel Kinnaman), she talks shit to him, insisting that if he comes back she’ll give him trouble even though he's a grown man with a gun and about 3 feet on Bullet. He grabs her by the collar and puts her in her place. (Taylor-Klaus does not have quite the same panache with slang as Kinnaman does. Sometimes her dialogue can sound more writerly than realistic). She takes a macho, protective attitude toward the other girls in her life, both Kallie and Lyric, a young woman she has a crush on.

Bullet is keen to find Kallie and has been tirelessly working toward that end, a loyal and devoted friend. In the first episode, trying to find her, she fearlessly put herself in harm's way and was raped, a fact she has kept entirely to herself. She has slowly made friends with Holder by insisting that he keep looking for Kallie, scoping out suspects, taking him to places that might help. She is bossy and pugnacious and, despite living for years on the street, still burns with the conviction that some things just are not fair -- so not fair she has to try and change them. The sweetest part of this season of “The Killing” has been the growing bond between her and Holder. She's allowed Holder to comfort her — a little — even as she continues to see herself as someone who provides care and comfort for everyone else. The hope of this season — and enough of a reason to worry that Bullet will soon be in danger — is that through Holder, Bullet will, eventually, become a cop herself, a calling she seems naturally disposed toward.

Bullet may be the most thoroughly drawn of the supporting characters, but this season of  “The Killing” has made everyone on its periphery complicated and full, not just degenerates or goodie-goodies. In last night’s episode, Kallie’s mother, Danette (“Upstream Color’s” Amy Seimetz), a horrible parent by any stretch, finally realized Kallie was in real trouble and went to look for her — even she, who has been casual and caustic about her daughter’s safety, was allowed the sympathetic moment. (Just as Lyric's vain, drug-addicted boyfriend Twitch was in a recent episode.) Danette asked for Bullet's help to find Kallie and Bullet gave it, even having realized, last week, that Kallie is probably already dead. Bullet took Danette to all the places she and Kallie liked to go, places Bullet has already recently been, letting Danette talk it out. It was a kind and generous deed, but also a painful one: Bullet providing emotional support to Kallie's crappy mom when she still needs succor herself. Back at the squat, Bullet told Lyric about her day: “You don’t have to be so tough all the time,” Lyric said and kissed her. Their world is nasty and brutish, but, even so, it's full of tenderness and caring.