We must hate our children

We crush them with debt to go to college -- and today, rates are actually set to double. Are we out of our minds? 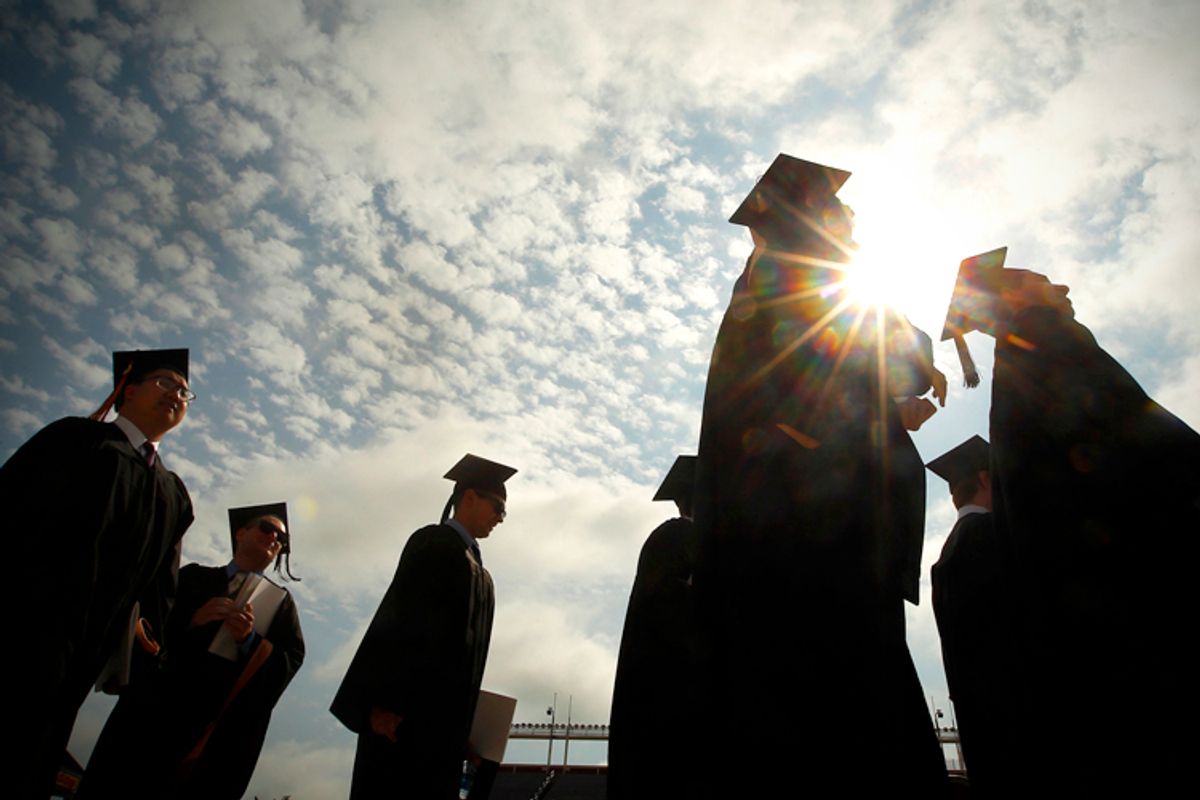 This article has been corrected since it first published.

Next time you’re watching a college graduation, as you look out over the sea of caps and gowns, make sure you notice the ball and chain most graduates are wearing as they march onstage to receive their diplomas. That’s student loan debt, which at over $1 trillion tops credit card debt in the U.S. today. The average burden is $28,000, but add in their credit cards and they’re graduating with an average of $35,000 in debt. It’s no wonder that people who’ve paid off their student loan debt are 36 percent more likely to own homes than those who haven’t, according to new research by the One Wisconsin Now Institute and Progress Now.

What kind of society sends its young people from higher education into adulthood this way? I’m aware I’m only talking about those lucky enough to go to college, when roughly one-third of high school graduates don’t – but if this is the way we treat our relatively lucky kids, the rest of them don’t have a prayer. For many, the school to prison pipeline functions much more efficiently than the school to college one; California is one of at least 10 states that now spends more on prison than on higher education. According to the Federal Reserve Bank, two-thirds of college graduates leave with some debt, and 37 million Americans are repaying a student loan right now.

Unbelievably, interest rates on federally subsidized loans are doubling today, from 3.4 to 6.8 percent. As Congress bickers over alternatives, even Democrats are backing “market-based” plans that aren’t as bad as GOP ideas, but aren’t good either. I hope they can find a way to lower interest rates, but the real scandal isn’t the rate hike. The real scandal is that we take for granted that young people must go into debt – at whatever interest rate – to pay for college.

Of course, the truly lucky kids – those blessed wealthy members of the Lucky Sperm Club – sail through higher education without debt. But today, even upper-middle-class kids are having to take out loans, as the average annual cost of a four-year public university soars above $22,000, while private schools are over $50,000.  Who the hell thinks this is a good idea?

I used to find it endearing when President Obama talked about how he and Michelle finally paid off their student loans after he was elected to the Senate. But in a way, the president’s folksy anecdote helped normalize what should be outrageous: that we expect young people to go deep in debt, well into middle age, to get a good education. Of course, the Obamas’ story should come with an asterisk, since much of their debt was built up paying for Harvard Law School, and clearly, that paid off for them. The assumption that students should borrow money to pay for an undergraduate degree, and that the only debate is over how high their interest rate should be, is seriously crazy.

As David Dayen explained in this great Salon piece, we shouldn’t even call them student “loans,” because you can’t refinance them, and you can’t get out from under them by declaring bankruptcy. It’s more like indenture. There’s no statute of limitations on collecting student loans, and lenders can garnish wages, tax refunds and even Social Security checks. Back in 2007, now-Sen. Elizabeth Warren asked: “Why should students who are trying to finance an education be treated more harshly than someone … who racked up tens of thousands of dollars gambling?” Nothing has changed, although Warren is part of a limited number of people in Congress who are trying.

In the survey of 61,700 student loan holders recently completed by One Wisconsin Now and Progress Now, students with bachelor’s degrees took an average of 19 years to pay off their loans, at an average cost of $117,000. Their average monthly payment was $499. And this isn’t a brand-new problem: Of the $1 trillion in student debt, 60 percent is owed by people over 30.

It wasn’t always this way. The postwar American economic boom had at its heart an intentional, comprehensive program of making higher education much more accessible. In 1946, 2 million Americans attended college or university, representing only one in eight college-age students; by 1970, there were 8 million undergraduates, one in three in that age group. And the balance of enrollment shifted to public institutions: In the '40s, more college students attended private colleges; by 1970 three-quarters were enrolled in public ones. Graduate enrollment spiked, thanks to expanded research funding, from 120,000 in 1946 to 900,000 in 1970.

States competed to expand their public university systems – and many were free, or close to it. The stellar University of California system was tuition free (though there were fees) until Ronald Reagan became governor in 1967; so was the City University of New York system for a long time. CUNY was from the start an “experiment,” in the words of co-founder Horace Webster, in “whether the children of the people, the children of the whole people, can be educated.” It was a contentious experiment, with its admission and tuition policies shifting back and forth over many years, but the egalitarianism at its heart, and through much of its history, can't be denied. And that was true of most public university systems. Late in the game, when I graduated from the University of Wisconsin in 1980, I was still paying less than $400 a semester. Now it’s almost 15 times that, at $5,500 a semester; the annual cost to an in-state student (including room, board, books and other fees) is $24,000.

Aaron Bady and Mike Konczal ran down the California history in a piece about “the slow death of public higher education” last year. With the U.C. system’s bipartisan 1960 master plan:

The doors of the University of California were thrown open, tuition-free, for the top 12.5 percent of high school graduates. The top 33.3 percent could find a place in one of the California State Universities, which were also tuition-free. Everyone else, if they so chose, could go to one of the many California Community Colleges, which were open not only to high school graduates but also to qualifying non-traditional students. Perhaps most important, community college graduates had the opportunity to transfer to one of the UCs or CSUs to finish their bachelor’s degree, if their grades were above a certain point. In theory and to a significant extent in practice, anyone from anywhere in California could, if they worked hard enough, get a bachelor’s degree from one of the best universities in the country (and, therefore, in the world), almost free of charge. The pronounced social and economic mobility of the postwar period would have been unthinkable without institutions of mass higher education, like this one, provided at public expense.

I got angry about this all over again having dinner with a friend who’s a little older than me. He finished at the very bottom of his high school class – and wound up at the University of Wisconsin-Milwaukee, which as late as the '60s had “open enrollment,” and cost $80 a semester. College unlocked something high school didn’t; he thrived and transferred to Columbia University and eventually got a Ph.D. That isn’t happening for anyone today, unless their wealthy parents can buy them into a private university.

Meanwhile, public universities are spending on new buildings, but they’re sharply hiking tuition as well as either cutting or just maintaining enrollment. (University of Wisconsin in-state tuition has doubled in just the last decade.) The Public Policy Institute of California found that the share of young people enrolled in U.C. or California State University campuses dropped 20 percent in the five years between 2007 and 2012. “You can go into any community and talk to somebody whose son or daughter either can’t get in or can’t finish [college] because they can’t get this or that course,” David Wolf, co-founder of the Campaign for College Opportunity, told California Watch. “Meanwhile, they go on campus and there’s all that fresh cement. That’s embarrassing, and it’s wrong.”

In the 1980s, at the flagship U.C.-Berkeley, more than half of all applicants were accepted; this year it was closer to 20 percent, as 67,000 applicants vied for 14,000 acceptances to the incoming freshman class (of 4,200 students, unchanged in the last 10 years).  Meanwhile, both public and private aid has shifted from "need-based aid," which tends to go to lower-income kids, to "merit-based aid," which is tied to income but less directly.  Not surprisingly, at Ivy League schools and the "public Ivies" (which includes the U.C. and U.W. flagship schools), 80 percent of  students admitted come from the top income quartile of American families; only 2 percent come from the bottom quartile.

Astonishingly, in 2008, older people born in California were a third more likely to have college degrees than younger native Californians, according to PPIC; elsewhere around the country, the difference was only 1/16th (30.9 percent versus 29.0 percent) – but still: Young American adults are less likely than older Americans to have attended college. This has to be the first generation for whom that’s true. We’re putting the history of American progress in reverse.

With student debt so pervasive and crushing, of course it matters that Congress do something to keep interest rates from rising. The House GOP is gloating that (in a bizarre role switch) they’ve passed a plan, and the Senate hasn’t. The House GOP plan would send students out into a maze of “market-based” adjustable rate loans.  Why should someone at age 18 have to navigate a thicket of variable-rate loans, where their interest rate could double over time? But even the compromise Obama plan, which would let students lock in a rate once they decided on a loan, has no cap on interest rates.

A growing number of voices, including the Fed, are pointing to the way this debt burden is a drag not just on the borrowers but the wider economy. That One Wisconsin Now survey found that student debt reduces average aggregate car purchasing by $6.4 billion a year. Young people are leaving school with the kind of debt that was once only incurred by the purchase of a first home; not surprisingly, it’s depressing home buying too.

That practical economic argument is important, but almost no one is making the larger economic argument, that expanded access to higher education is good for everyone, period. There are proposals to reform the student loan system to make it more like a standard loan agreement and less like indenture. The Obama administration has expanded opportunities to have debt reduced for those in education or other public interest careers, which is great. But when we talk about doing big things again, when we dream about infrastructure, why are none of our major leaders advocating for new campuses for our state universities and colleges?

A Washington Post piece on the interest-rate impasse noted that Obama and Mitt Romney both called for Congress to stop the rate hike last summer, and it happened. “But student-loan policy has drawn less attention this year now that the presidential election is over.” Indeed. We should stop mouthing platitudes about how “children are our future.” From preschool to post-graduate education, we are proving the opposite is true.