CNN's Don Lemon on Paula Deen, Rachel Jeantel and "The N-Word": "I don't think you can ever redeem that word"

The CNN anchor, who hosted a special on the most controversial word in the vernacular, has been racially profiled 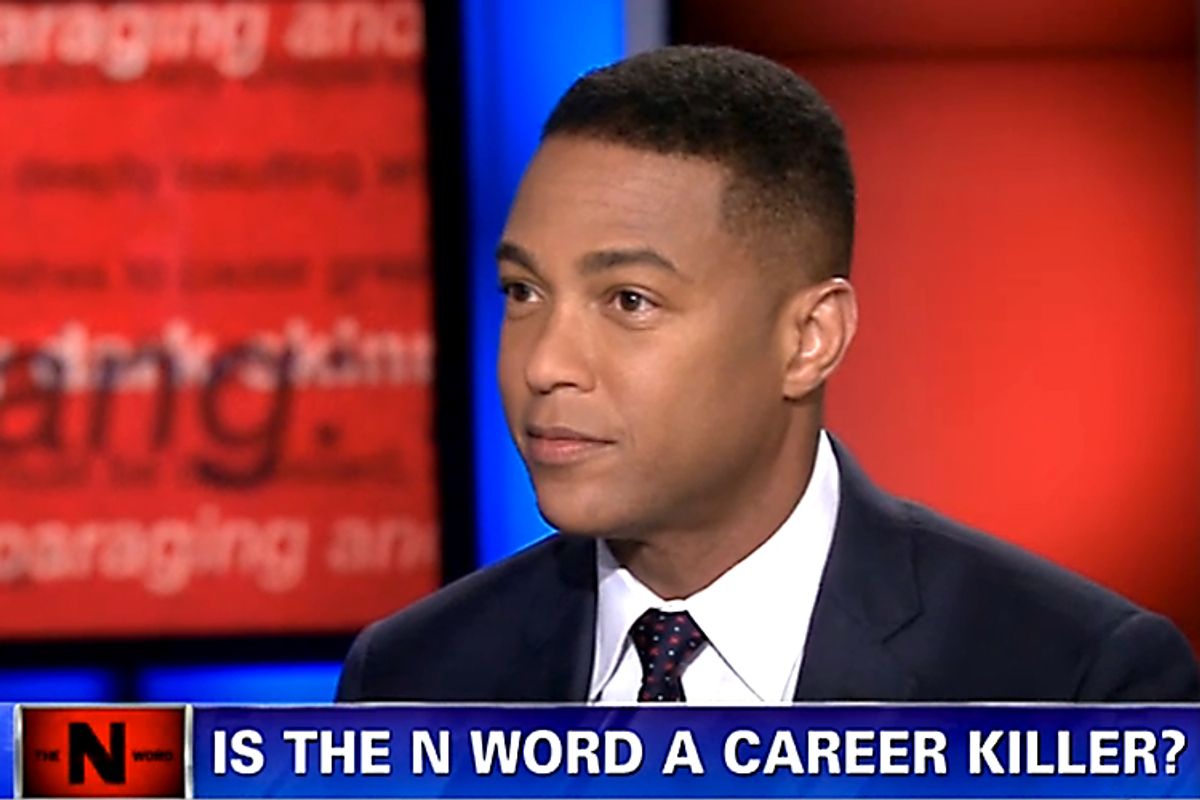 Between Paula Deen's use of the N-word and the racist treatment of George Zimmerman trial witness Rachel Jeantel, it's been a particularly difficult time for race relations in America -- and one in which barbed language flourishes.

Last night, Don Lemon, the CNN anchor, hosted a panel discussion called "The N-Word," bringing together luminaries including Wynton Marsalis and Donna Brazile (among many others) to discuss the word's place in American society -- and whether it still carries weight.

Lemon also drew some heat on the blogosphere for asking people on the street their thoughts about ethnic slurs, including "cracker," used to describe white people. During the ongoing Zimmerman trial, witness Rachel Jeantel, who's been mocked for her lack of facility with cursive as well as for various coded racial descriptors, said she did not find the term offensive; nor, by comparison to other slurs, did the folks Lemon spoke to. The special also touched upon black panelists' experience with the police and upon the use of the N-word in rap music.

The anchor spoke to Salon about both the "cracker" segment -- which he states had nothing to do with creating a "ranking system"  but to uncover why certain terms are offensive -- and his use of the word "nigger" on-air. He also explained why he thinks Paula Deen shouldn't have been fired, talked about Jeantel's treatment on the stand, and described his own experience with racial profiling.

You argue that news outlets should use the N-word rather than referring to it in a coded way. Has there been opposition to that within CNN?

No. There's no opposition here. I think it's in everyone's best interest that that word be used as judiciously as any other insulting word is used. If it's pertinent and relevant and germane to the conversation, it should be used in news stories. When you say, "Someone used the N-word," you don't actually say that they said "nigger."

What did you make of "Django Unchained," a film written and directed by a white man that used the word as though it were "the" or "a"?

I think there are times when you can take poetic license. There are other times that you can't. I didn't see "Django Unchained." I saw that it was used a lot. I don't have a feeling about that. That movie is something for adults to see. Adults know what they're getting into.

I saw some reports on your broadcast portraying it as though you were trying, solely, to determine "Is the N-word worse than 'cracker.'" Is ranking racial slurs effective, or was it your goal in any way?

I'm not trying to rank it. I went up with a number of different words on cue cards. Among them were "cracker," "N-word," "nigga," "nigger," "honky," "spic." The one that offended people the most was the word "nigger." It wasn't a ranking we came up with. I just wanted to see if people were offended -- Rachel Jeantel said [in her testimony] that she didn't think the word "cracker" was racist or a racial term. And [on-air] people laughed [when they heard "cracker"] -- "What is this, the 1970s?" It was as though we'd said "Jive turkey." People didn't look at that word as offensive. They didn't think it was right to use it. The general consensus is there's not the same power behind that word.

What do you make of the treatment of Rachel Jeantel in the media?

Here's the thing. I don't watch the media that much. I know that she has been portrayed as other -- as a caricature of a person. I don't think it's fair for a 19-year-old to be treated as such. She is 19, regardless of what color she is. I don't know many 19-year-olds who have the weight of a trial resting on them.

Let me see how I want to answer that. This is my assessment. The first day she was being questioned, the audience watching at home -- and we haven't seen the jury's decision -- but the perception was that they were beating up on and badgering a 19-year-old regardless of what you thought about her testimony. There was a breakdown -- some people understood her, some didn't. Most African-Americans understood what she was saying. I don't know if other people didn't. They were saying she was almost pre-lingual. Well, they don't teach cursive in schools. I know plenty of kids who don't learn cursive in schools, and they don't have that judgment put on their heads because they're not in the middle of a trial. It's a difference in communication between people of different backgrounds.

In some ways, horrible incidents like the death of Trayvon Martin provide a sad opportunity to have real conversation -- an opportunity that seems to be passing by. How can we bridge the divide you're talking about?

I think it's incumbent upon anyone who has a platform to do what we did last night. I'm very proud that Jeff Zucker thought of me. I don't see this kind of programming on any other network. I don't see any other network taking a chance. Otherwise, it sort of sadly gets lost. It won't come up again until the next tragedy happens. We should be doing what we did, regardless of whether or not we got it perfect.

Did the treatment of Paula Deen -- that she was fired from her Food Network series and lost so many of her endorsement deals, without having been pushed substantively to explain herself -- count as another one of those lost opportunities to learn why she feels the way she does?

I don't know about "explain herself." She has all the opportunity in the world to explain herself, on television or in any medium. I don't know how much the world needs to hear from Paula Deen except something contrite. I do feel that Paula Deen should not have lost her job, and I've said this on the air. The marketplace should have decided. The marketplace decided something different. Her books are No. 1. People are lobbying Wal-Mart. But corporate America is deciding what to do with Paula Deen before she could do another show and see what the ratings were.

Does it bother you that she's selling so many books, given that some people buying them may be expressing solidarity with her worldview?

No! Paula Deen is a human being. She deserves forgiveness and a chance at redemption as much as anyone else. America is about redemption. But people are upset because she doesn't seem to understand what she did, and how she has made money and a livelihood on a history many find repugnant. That's why people are upset with Paula Deen. We did it on "The N-Word." What we're trying to get people to understand is that it's much bigger than just the N-word. It goes beyond that.

Do you think that word will lose its power over time, given that it barely seems to have over centuries?

I'm not a historian, nor do I have a crystal ball. I think that word will forever be toxic and volatile and explosive. And as Wynton Marsalis said last night, it's electromagnetic. Just the way it sounds -- that guttural sound. I don't think you can ever redeem that word.

Would issues like this get covered more if there were more black journalists? And is there a diversity issue in TV news?

We can always do better when it comes to black journalists, Asian journalists, women, men. I believe in diversity in front of and behind the camera. Black people buy homes, that's not exclusive to white America. Black people buy cars. Black people go to the movies.  But not just black people -- specifically African-Americans, people who came over on a slave ship and helped build this country, have a particular story in history. Those people should have more of a place in American media.

"Objectivity" is likely a false goal for a journalist, but does it make it difficult to cover the George Zimmerman trial at all given that you are black?

No, it makes for more nuanced conversation and understanding of a story. As a person of color, I've been followed and profiled before. If you don't have that experience, it doesn't resonate for you. To have that experience makes you an even better person to report it. Just because you happen to be a certain race, ethnicity, sexuality, it doesn't make you biased, it gives you special expertise. And George Zimmerman is human. I wouldn't want anyone innocent to go to jail and suffer.

Were you profiled recently?

I'm profiled all the time! But this -- I've talked about this -- happened in a store. The police were called. It had to be settled. Imagine if that person had had a gun! I don't know what would've happened.