Meet the "Journalists Against Journalism" club! 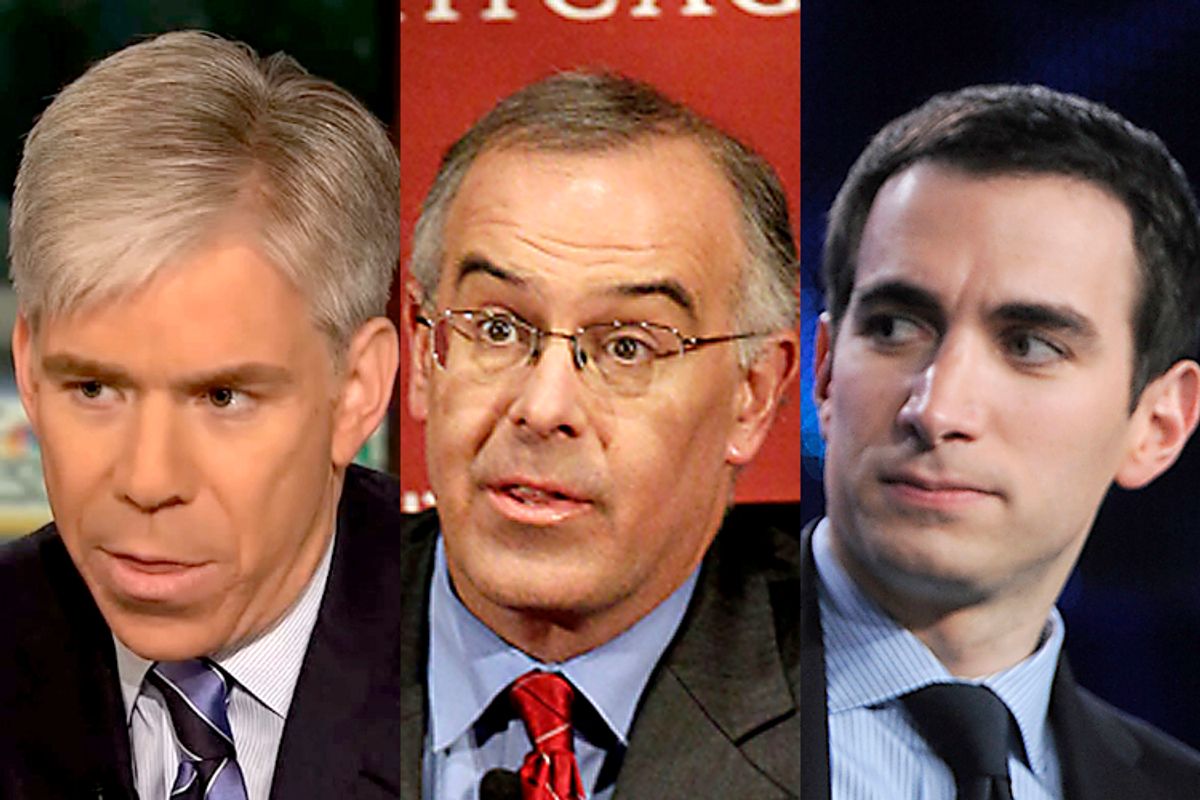 From David Gregory to Andrew Ross Sorkin to David Brooks, the ranks of Washington's hottest new club continues to swell. Call it Journalists Against Journalism -- a group of reporters and pundits who are outraged that whistle-blowers and news organizations are colluding to expose illegal government surveillance. To this club, the best journalism is not the kind that challenges power or even merely sheds light on the inner workings of government; it is about protecting power and keeping the lights off.

Before today, this club could be seen as a collection of individuals. But not anymore, thanks to the hard-to-believe house editorial of the Washington Post titled "Plugging the Leaks in the Edward Snowden Case." Inveighing against the disclosures of NSA contractor Edward Snowden, the paper wrote that "the first U.S. priority should be to prevent Mr. Snowden from leaking information" and then fretted that Snowden "is reported to have stolen many more documents, encrypted copies of which may have been given to allies such as the WikiLeaks organization."

What's so utterly revealing about this editorial is not merely that it reads like hard-boiled talking points given to politicians by their surveillance-industry campaign donors. No, what sets this Washington Post editorial apart -- what vaults it into the annals of history -- is how it is essentially railing on the Washington Post's own source and own journalism.

Yes, that's right, the Post was one of two news organizations that Snowden originally contacted and that subsequently began breaking the NSA stories. That means the Washington Post editorial represents the paper's higher-ups issuing a jeremiad against their own news-generating source and, by extension, the reporters who helped bring his leak into the public sphere.

Such an unprecedented move exposes the intensity of the paper's -- and the larger establishment media's -- ideological antipathy to journalism. Simply put, the Post's higher-ups are apparently so ideologically committed to subservience and to the national security state that they felt the need to take the extraordinary step of publicly reprimanding their own source and their own newsroom for the alleged crime of committing journalism. Indeed, their concern is not that Snowden and journalists might be muzzled, but that they might not be before they break any more news.

As overused as Watergate analogies are, one is particularly apt in this case because of the paper in question. And that analogy should be obvious: Today's editorial is the equivalent of the paper issuing an editorial in 1972 not demanding more information from President Nixon, but instead insisting the Nixon administration's first "priority should be to prevent Deep Throat from leaking information" and worrying that Deep Throat "is reported to have more information" that could soon be broken by Bob Woodward and Carl Bernstein.

At one level, this is all downright hilarious. But at another level, it isn't because it potentially intensifies a larger chilling effect on investigative journalism that is happening throughout the media. After all, even though there is theoretically a divide between editorial boards and newsrooms, the former is known to speak for the decision makers at a newspaper. And here we have one of the biggest set of media decision-makers saying to reporters at the Post -- and all those reporters elsewhere, who hope one day to work at the Post -- that cultivating sources and working with whistle-blowers is not something that will necessarily be rewarded.

In fact, it says quite the opposite: that it won't be rewarded, and it will more likely be frowned upon. You can bet every reporter who reads that editorial will understand that message, and many will unfortunately take it to heart.