My year of modesty

I swore off makeup and covered my hair, arms and legs for nine months. It was frightening -- and liberating 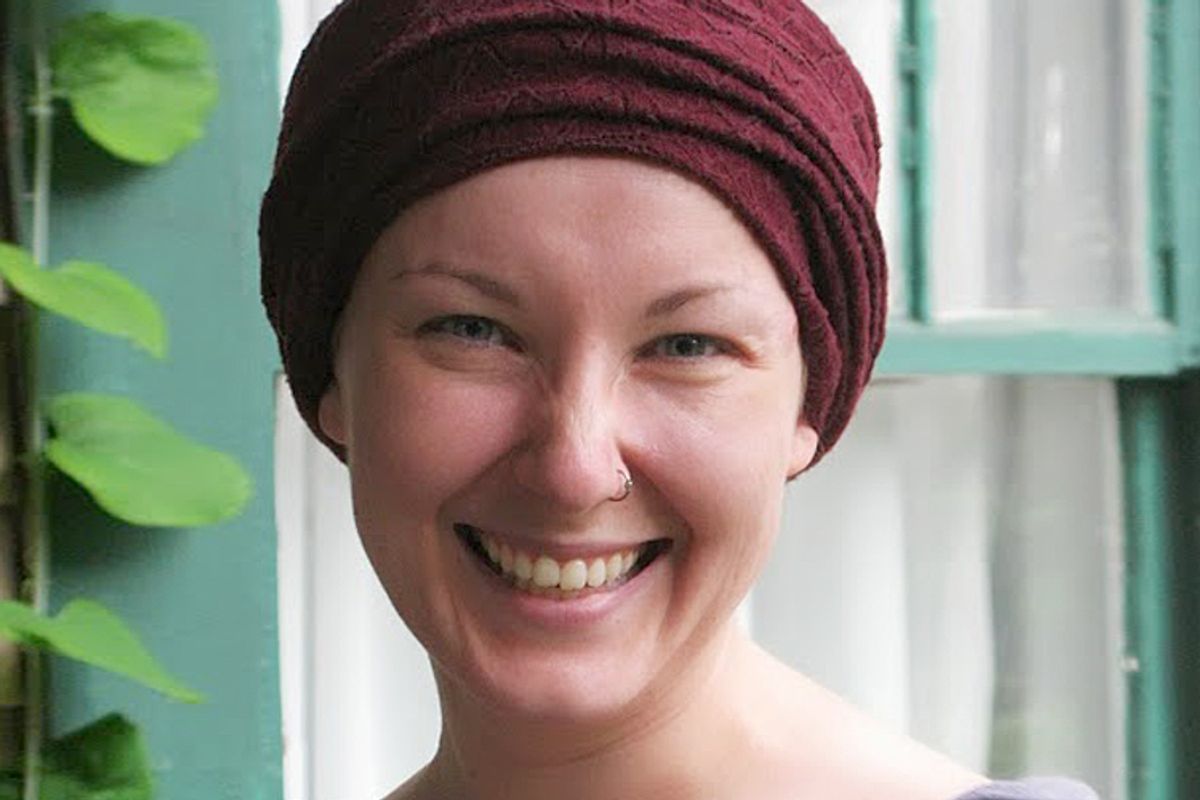 Photograph of the author
--

The idea for my modesty experiment began when I worked in New York City as a receptionist for a company at Fifth Avenue and 52nd Street, while I edited short films on the side. Every morning I would shoehorn myself onto the train with thousands of expensive-smelling, coiffed women who somehow managed to keep their hair looking great under wool caps in winter and despite hot, stinky gusts of subway backdrafts in the summer. It was an army of ladies sporting fitted waistlines, toned arms, blown-out hair, full faces of makeup and heels (which was incredible, considering all the walking we all had to do). Everyone looked good, no one was phoning it in, and we were all stylish.

I hated every second of it. It felt like putting on a costume. In fact, that was what I called it: my “Grown-up Suit.” Still, given where I worked, I had to look like that. Every. Damn. Day.

By contrast, on my way home to the warehouse I inhabited in Williamsburg, I would look at Hasidic women in their headscarves and long skirts with something akin to envy. Gawd, I thought. How nice would it be not to have to think about stupid crap like the latest accessories and whether my hair had gone limp?

Mind you, these Hasidic women were stylish: They looked good. They just didn’t look like everyone else. These women were not “fashionable” first, like most of the women I saw everywhere else -- they seemed to be focused on something else, something more important than what was trendy. They had a very good reason for not dressing like the train-squishing crowd of Fifth Avenue, and I wanted a reason too.

Out of curiosity, while I sat behind my desk answering phones or prepping conference rooms I began to research Quaker, Jewish and Muslim belief systems, which allowed adherents of both sexes to dress modestly for spiritual reasons. I briefly considered beginning to dress like a Quaker, but I thought to myself, “What’s my excuse? I can’t just magically dress like a Quaker or a Muslim because I’m tired of dressing like an American.”

Eventually I scrapped the idea: I had no excuse to buck the trend. Plus, it would be a little ridiculous: “No, I dress like this because I’m pretty sure the beauty industry is a ploy to keep us from thinking about how to break into the boys’ club of corporate America, and obsession with your appearance is frivolous and time-consuming! Would you like some more coffee, expensively dressed and perfectly nice female co-worker?” No, thanks.

Two years later, I was a first-year student at Candler Theological Seminary in Atlanta. (Don’t ask how I went from wanting to be a filmmaker in New York City to applying to seminary. It’s as long and weird a tale as you might think.) One day, a woman came to my “Women in Church History” class. She had spent some time in the Middle East with her husband (who is Middle Eastern) and children, and while there she had been required to cover her hair and adhere to particular clothing requirements.

She was there to talk specifically about hijab, the modesty requirements for many Muslims, and its effect on women. To a classroom full of vocal, educated feminists who were eager to prove themselves, this lecture might have been your typical Islam-slamming discussion on whose fault it is that men desire women (it’s men’s, in case you’re wondering). I was ready to go to battle.

Instead, it was a shock to all of us.

The speaker explained very clearly how much she had enjoyed (and admittedly, sometimes hated) dressing in accordance with modesty rules. She talked about her daughter who, being half-Muslim, had decided to wear a headscarf at age 8 soon after returning to the States from overseas. The speaker didn’t advocate for hijab, but she certainly wasn’t opposed to it.

This was not the podium-pounding, acrimonious discussion I had prepared for. Instead of feeling self-righteous and angry, I felt inspired -- and profoundly unsettled. I didn’t know it then, but what I had learned about modest dress was teaching me about my own hypocrisy.

After class I retreated to my favorite couch -- the one on the fifth floor the faculty didn’t usually catch me napping on -- and buried my nose in that week’s reading assignment, “Muslim Women in America.” It’s not possible, I thought, that women would feel freer dressed modestly, that women would choose to be ashamed of their bodies.

But it wasn’t shame, I soon learned. In fact, for many women, it was pride. It was a desire to be considered for things other than what their hairstyle communicated, or whether their butts were shaped right -- a desire that many people, not just women, share today.

In America, Islamic dress is often a choice, and the women who make this choice are declining to endorse Western Imperialism and the sexualization of their bodies. It’s a way of expressing modesty and resisting the pressure to be scrutinized against Western standards of beauty.

And then, as I sat on the couch at one of the best seminaries in the States, tummy sucked in so I looked thinner, makeup on my face to hide my blemishes, wearing uncomfortable shoes because they matched my outfit even though I had to walk three miles in them, hair with enough $15 product so it laid just so, and my whole "look" completed with a scarf that was always in my way and skirt arranged to look natural but that was actually perfectly placed to cover my knee socks -- pinched, pulled, painted and still not good enough, I thought, "Is this really any better?"

Up until that moment, I had considered myself the kind of person who was “above” thinking too much about my appearance (remember, the Grown-up Suit was just a costume -- deep down I disdained all that “frivolous” stuff), but that day on the couch I was uncomfortably aware of how much I did care about how I looked. One day I had noticed cellulite where it had never been before, and it really upset me. My neck was saggier than it was when I was 20, and I found myself awake at night wondering if I was just fat, or getting older, and whether I was still beautiful.

Why should I care? Why, if beauty didn’t matter to me, did I have more than $600 worth of makeup in my closet (and I never left the house without at least some of it on) and more shoes than any sane individual needs? Why was I convinced that if I didn’t look “sexy” or at least attractive no one would listen to what I had to say?

The fact that I was so afraid to let go of all those security blankets told me that I should try it. So I did.

With the support of my seminary community and my then-boyfriend, I designed the Modesty Experiment, in which I took my cues from Jewish, Muslim and some Christian modesty practices in order to loosen my death grip on the idea that youth and beauty were prerequisites to relevance. I started a blog and a journal to stay accountable, and I gave away more than a third of my clothes. The clothes I couldn’t wear during the Experiment because they had no sleeves or were too short or tight, I gave to a friend, along with all of my makeup. It was hard -- I actually cried on the way home from the clothing drop box.

And for nine months, I covered all of my hair, wore nothing that was so fitted that I felt like I had to sit or stand funny to look good, and never exposed my knees or my shoulders, except at home. With rare exceptions, I wore no makeup or nail polish. It was kind of brutal, and really liberating.

It’s easy to say that age and appearance don’t matter when you’re young and beautiful. Facing evidence of my own aging, I had found (to my disgust) that I was just as panicked about my looks as other women. I wasn’t liberated. In fact, I had been telling myself I was beyond superficiality when in fact I had bought the whole thing hook, line and sinker.

But in nine months, I learned that yes, you do get more done when you’re not obsessed with your shoes, but you do still need to look put-together for your own self-confidence. I learned that looking good isn’t necessarily a bad thing, but when it becomes the cornerstone of your identity -- like the advertising industry tries to convince us it is -- then you’re doing nothing but damage to yourself.

I learned that if you put down the Beauty Suit you will be ignored by people who think you have to look a certain way to be worth their time (men and women included), and that that is a small price to pay for not having to put on a costume every time you think you’ll need to impress them. I learned that you will feel invisible until you open your mouth, and then people will be amazed at what you have chosen to do in protest of the Western beauty ideal. And then those people probably won’t date you because you’re kind of outspoken. Or whatever.

I learned that, to the people who matter, you do not become invisible when you stop trying so hard to look available. I became visible to the one guy I had been looking for, and his proposal three weeks ago rocked my world. I became visible to a community of women who began to have conversations about just how trapped they felt by the beauty ideal because it demands so much expensive upkeep and such a constant stream of internal criticism. I even heard from a lot of guys who swore that the more made-up and “rich” a woman looked (think the Kardashians), the less inclined they felt to take her seriously, either as a co-worker or a dating prospect.

More than anything else, I learned how to see my appearance for what it is: a “Lauren Suit,” which does nothing more than provide a necessary exterior for an inner life that will never be available in stores. Also, you would be amazed at how much money you save not trying to buy the latest Grown-up Suit.

Lauren Shields is the author of "The Beauty Suit: How My Year of Religious Modesty Made Me a Better Feminist" (Beacon Press, 2018).