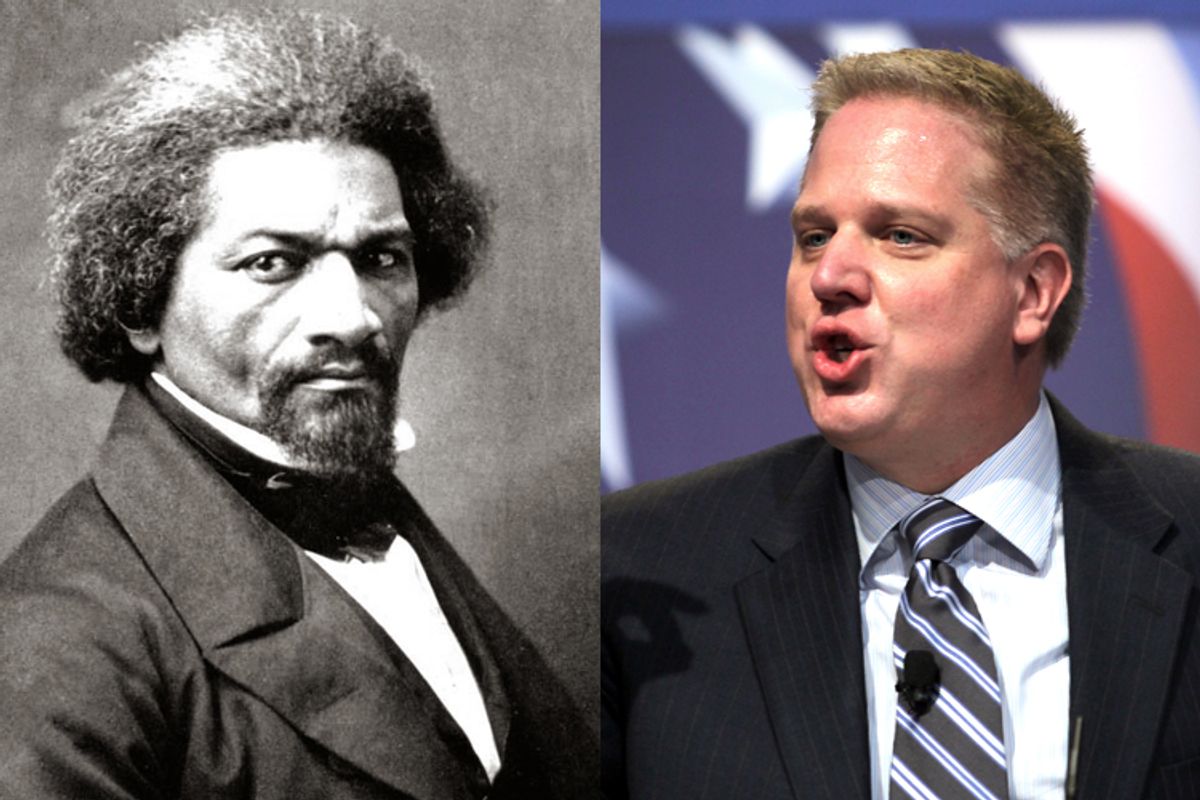 Last week, Frederick Douglass -- who escaped slavery at 20 years old and whose words would help bring an end to the institution -- was honored with a statue in the U.S. Capitol’s Emancipation Hall in Washington, D.C. In the 1960s and '70s, far left activists like Eldridge Cleaver of the Black Panther Party and Angela Davis of Communist Party USA incorporated Douglass’ call to agitation in their various causes’ platforms. Yet in a fascinating turnaround, the brilliant abolitionist, writer and orator is developing a new – and perhaps, unexpected – political identity: Tea Party hero.

The recent rise in interest in Douglass by conservatives stems from their belief that his life epitomizes the self-reliance they champion, and his writings help provide justification for small government. It may be surprising to some that the fiery, black radical abolitionist of the 19th century, who once called Fourth of July celebrations “a thin veil to cover up crimes which would disgrace a nation of savages,” could be inspiring to a Tea Party patriot. Or that social conservatives could find common cause with the man who bitterly attacked America’s Christianity as “a lie.” But that is exactly what is happening.

Though Douglass famously referred to himself as “a black, dyed in the wool Republican,” there is more to his current appeal among conservatives than party affiliation.

I recently spoke with K. Carl Smith, an African-American conservative who is a popular speaker in the Tea Party circuit. Smith considers himself a Frederick Douglass Republican. He told me, “Douglass is a bridge that will reignite America’s passion for liberty.” Regarding the timeliness of last week’s Douglass statue dedication in the Capitol, he said, “There’s a reason why it’s now – because the state of our country is in such an uproar in terms of the economy and social issues. We have a runaway federal government. It was Douglass who helped Lincoln save a country that was divided. And we need to look at Douglass again. Douglass is key.”

And Smith is not alone.

Prominent conservative economist Thomas Sowell cites Douglass in his critique of government intervention on behalf of African-Americans in a column in which he writes, “Frederick Douglass had achieved a deeper understanding in the 19th century than any of the black ‘leaders’ of today.” And Bush-appointed Supreme Court Justice Clarence Thomas quoted Douglass for support in his controversial dissenting opinion in the Grutter v. Bollinger affirmative action case.

Conservative author and provocateur Ann Coulter reminded her Twitter followers last week that Douglass called the Republican Party “the party of freedom and progress” in light of black Louisiana state Sen. Elbert Guillory’s recent switch from Democrat to Republican. Guillory himself recalled Douglass in his speech explaining his defection from “the party of Jim Crow,” as he referred to the Democratic Party.

Conservative Christian governor of Indiana Mike Pence invoked Douglass in a speech to an audience at Hillsdale College, the university National Review has called the “citadel of American Conservatism.” Pence reminded the audience that Hillsdale continues in its tradition of standing for “the proposition that all men are created equal,” as it did long ago with Frederick Douglass. (Douglass was a distinguished speaking guest at Hillsdale during the Civil War era.)

Tea Party favorite Glenn Beck not only explored Frederick Douglass’ life and legacy on his show GBTV, but he called Douglass “one of the most amazing Americans to have ever lived.” Beck laments that only 22 public schools in the U.S. are named after Douglass, saying that if George Washington wasn’t his prime role model, “it very well may be Frederick Douglass.” Beck asks the audience, “The reason he’s not celebrated as a hero by progressives?” And his answer: “I don’t know? Because he decimates everything these guys stand for.”

Attention to Douglass is not just being paid by independent conservative voices, either. On June 19 (also known as Juneteenth, or Emancipation Day), the day of the Douglass statue unveiling, the Republican National Committee released a video on YouTube called “Frederick Douglass: Freedom in Action.” The video features South Carolina Sen. Tim Scott connecting Douglass to a worldview that is in line with the contemporary Republican Party.

For those who first read Douglass’ blistering Fourth of July Speech in Eldridge Cleaver’s Folsom Prison-penned classic "Soul on Ice," or who picked up "Narrative of the Life of Frederick Douglass, an American Slave" – the “New Critical Edition,” which features Angela Davis commentary from 1969 – the questions will likely arise: Are conservatives taking Douglass out of context? How can the same man inspire Black Panthers and Tea Partyers?

First, Douglass is difficult to take out of context. His writing is not only elegantly conceived, but it is always pointed in its meaning. (His 1852 Fourth of July speech, which Yale history professor David Blight considers to be “the rhetorical masterpiece of the American abolition movement,” is just one of Douglass’ countless unambiguous compositions. It is at the same time a biting attack of pre-Civil War America’s hypocrisy and an exposition of hope that the nation will live up to the ideals of the Founders.)

And second, Douglass’ inspiration of the left was as an agitator. As he said in the lead-up to the Civil War, “If there is no struggle there is no progress … Power concedes nothing without a demand. It never did and it never will.” To the modern conservative, “power” is the status quo in which much of the progressive agenda is public policy. Conservatives don’t equate Big Government with slavery, but they do see a growing federal government as damaging to the nation and infringing on their liberties. Frederick Douglass, the Great Agitator, now speaks to the conservative as outsider.

Conservatives choose liberty as their defining virtue (as opposed to the mutually exclusive progressive dedication to equality of outcome) – and as Blight has noted, Douglass explained freedom “as well as any American ever has.”

Also, though Douglass had venom for America’s founders and governing blueprint early in his career, after careful study, he came to the conclusion that “interpreted as it ought to be interpreted, the Constitution is a glorious liberty document.”

Douglass once declared in regard to government treatment of African-Americans that what he asked for “is not benevolence, not pity, not sympathy, but simply justice … Your doing with us has already played the mischief with us. Do nothing with us!” These words are now shouted at the federal government by small government proponents of all races, especially in the wake of the ongoing IRS scandal and NSA revelations.

Beyond his writing, Douglass’ career and financial success are a celebration of free market capitalism. He was considered property when he was born, but Douglass died a wealthy man as a result of decades of hard work as an orator, newspaper publisher, author and diplomat. His description of the first money he earned as a free man, as his own master, is one of the most touching moments in "Narrative." Douglass risked his own liberty to help those in bondage, and he understood the enduring effects of slavery after it was abolished. In 1894, Douglass said, “Under the whole Heavens, there never was a people liberated from bondage under conditions less favorable to the successful beginning of a new and free mode of life, than were the Freedmen of the South.” Yet he rejected Radical Republican Thaddeus Stevens’ wealth redistribution plan following the Civil War – Stevens proposed confiscating former Confederate farmland and giving it out to freed slaves and poor whites in 40-acre lots.

According to Peter C. Myers, writing for the conservative Heritage Foundation, Douglass “judged it ‘arrant nonsense’ to conflate the causes of abolitionism and socialism … Douglass throughout the postwar years insistently extolled the property right and virtues of free labor that supported it, and he called upon his fellow black Americans in particular to cultivate the self-reliant virtues of industry, productivity, and thrift.”

And social conservatives note that though Douglass rightfully called the Christianity of the slaveholders “corrupt,” he had faith in the “Christianity of Christ,” which he called “good, pure, and holy.” They also can relate to Douglass’ distinction between liberty and libertinism – he vividly described the latter as a tool of the enslaver in "Narrative."

When Douglass’ statue was unveiled last week, Democrats counted it a victory. Until now, statues in Emancipation Hall (and the rest of the U.S. Capitol visitor center) only represented the States. Inclusion of the Douglass statue, which represents the District of Columbia, is seen as a small but significant win in a battle for District of Columbia statehood, which would benefit Democrats in Congress.

But as Republican Speaker John Boehner took the stage, leading the ceremony that pushes Frederick Douglass deeper into icon status, calling Douglass “one of the greatest Americans who ever lived,” it became less clear than ever who will win the battle to claim the legacy of Frederick Douglass.

Sean Coons is a writer and teacher in Los Angeles.