My RV on the Upper West Side

When I moved into a Winnebago, I could finally afford the neighborhood of my dreams 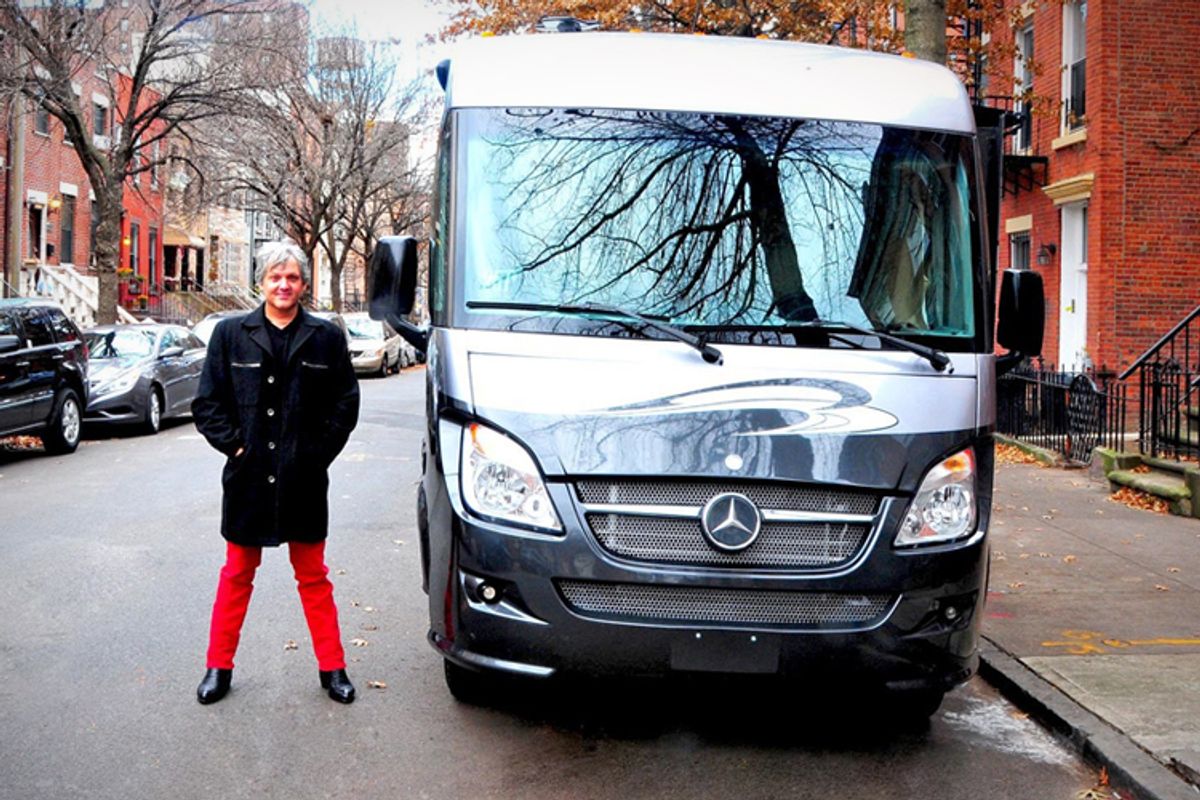 Photograph of the author (Jean Friedman)
--

At 6:48 a.m., I woke to the sight of a squinting man, his nose a quarter inch away from my bedroom window. Though a one-way curtain prevented people from peeking in, even if they cupped their hands on the glass, I was fed up with snoopers on this particular morning and banged the window with my palm. The guy’s head snapped back, not from the blow, but from surprise. He darted away like a startled cat and I turned over and went back to sleep.

There wasn’t any good way to keep passersby from looking in the windows of my 2013 Winnebago Via -- my home on the streets of Manhattan from December to February of this year. It was as though I’d left an 11,000-pound new couch on the curb. I obliged all strangers at first, telling each who knocked or tried to glance inside all about myself (I’m a writer and musician), why I was there (I didn’t have a place to live) and how it was going (wonderfully). By the time I’d given an interview to the 10th amateur reporter, I’d had enough. I'd grown tired of telling the story and realized the less people who knew my personal details, the better.

Since 2000, I’ve been test-driving and reviewing cars and motorcycles for a living. I’d been offered RVs since I started the job, but I always turned them down. Even the best of those cars seemed gauche and clunky. I had no desire to be an RV guy, even temporarily. But I was between apartments, and the Winnebago seemed a way to both save money and live in neighborhoods I’d always loved but could never afford. I chose the corner of Riverside Drive and West 81st for its proximity to bookstores, coffee shops, Central Park, Zabar’s and diversity, all the things denied to me in Inwood, where I’d lived for nine years and where I was now being booted from by my landlord, who wanted my apartment for two of her children. I put my stuff in storage, picked up the Winnebago at a New Jersey dealer, and drove back over the George Washington bridge to the Upper West Side.

I’ve lived in 14 different addresses in New York City and was familiar with the perils of street-level apartments: sounds of passing cars and trucks, the occasional drunks or street people looking in my windows. But the Winnebago was a more intense experience. There was no buzzer, lobby, super, neighbors. No buffer between me and the world besides a few inches of uninsulated metal. The street was only 4 feet below me.

On my first night, I changed into pajamas at 11 p.m. and crawled into “bed,” a trio of firm mattresses that, when laid side by side and covered with a sheet, made up queen-size sleeping quarters. It took me a good 90 minutes to drift off and twice I thought I heard the knob of my side door being rattled. I jumped each time, squinted through the shade and saw no one. When big trucks began whizzing by at 4 a.m., Winnie shimmied and shook as though a giant paw was mauling her. I’d get used to that.

I rose the next morning at 6 a.m., fired up the generator, made the bed, and went for a run in Central Park, showering afterward at the New York Sports Club on West 80th, where I am a member. I had decided I wouldn’t use my toilet or shower as I had nowhere to empty them. When I needed to go, I somehow found a place. The biggest challenge was keeping myself from feeling like I was homeless. Technically I was, although I had other places to go, including my mom’s apartment in New Jersey at her assisted living facility, and friends’ houses.

Four days after parking, I had to move the Winnebago for street cleaning, and so I did a bit of aimless circling, like everyone else with a vehicle in New York City, only it was impossible to double-park, so sometimes I just ended up driving. Like a kid stamping his feet in mud, Winnie seemed to relish every street bump, pothole and divot and lurched left and right if the street was particularly rough. I had to stomp the brakes once and my iPad flew off my bed and launched into the air, crash-landing near the refrigerator, unhurt. More than once, I hit a pothole and everything dumped onto the floor, including jugs of water. Eventually, I learned to duct tape all the drawers and cabinets shut.

But in this town, one must often adapt to absurd contortions and soon my stay felt “normal.” I got up for work like anyone else, made my coffee, ate fruit and a bagel with peanut butter, got dressed, and sat down in the passenger seat to bash out 800 words before lunch. In the late afternoon, the writing would be put away and out would come the guitar, bass, microphone and iMac set up on a table, and I’d record tracks to whatever new song I was working on in Garageband. Friends started visiting, and one night three of us lit candles, put on some music and danced. I took Winnie to the funeral of a friend’s mom. I drove to gigs to play music. And I wrote, wrote and wrote, managing 30,000 words of a book. I felt like I’d won a scholarship to a rolling writer’s retreat.

The end came when a week-long snap of obscene, bitter winter arrived in late January. I’d been warned to aim south as the weather cooled and to drain all the water out of the unit before the temperature dipped to the high 20s, but I put it off, thinking I had time. I woke up shivering one morning, my nose and ears in danger of snapping off. I had no heat. Icicles hung several inches from my bathroom faucet. It was 14 degrees outside, 38 inside.

My Winnie had become a solid block of ice. I tried, in vain, to cuddle her a bit, running her generator throughout the day, taking short trips, keeping an eye on her. But “keeping an eye” on a frozen Winnie is like keeping an eye on a naked guy in a snowstorm. Your “eye on it” doesn’t really help anything.

I parked outside the home of a friend on Riverside and 114th, staying warm indoors and working each day at a nearby library. The Winnebago turned into a one-bedroom closet where I fetched fresh clothes and food. It was now a dead thing, like Jack Nicholson’s frozen corpse at the end of “The Shining,” and it became repellent to me.

Finally, I fled Manhattan for Long Island, with its easy-to-find diesel and propane, and lodged with another friend while I looked for an apartment. Less than a week later, an aggressive police officer showed up at my friend’s door and said there had been complaints from neighbors about Winnie. I had to move her or face a ticket and tow.

The weather that day had warmed just enough for Winnie’s pipes to thaw slightly. I boiled several pots of water, pouring each into the bathroom drain to speed things up.

Miraculously, the pipes hadn’t ruptured with the expansion and contraction of water, and I was able to drain the rig at a nearby campsite. Winnie now had heat and was back to her old self. But I’d had it with the smell of diesel and propane and rubber, with worrying about who was around me at night, the occasional hail sounding like machine-gun bullets on my roof and my cramped quarters where each day brought a bump, bruise or scrape on some part of my anatomy. I drove Winnie back to the New Jersey dealer and headed off in a borrowed car, my possessions jammed into its innards.

I found a place to live, of course, as everyone does. But four months later, I’m still habitually stacking cans below the kitchen sink so they won’t tumble out when the building lurches.