Ben & Jerry's founder Ben Cohen is traveling the nation getting citizens to stamp their dollars. Here's why 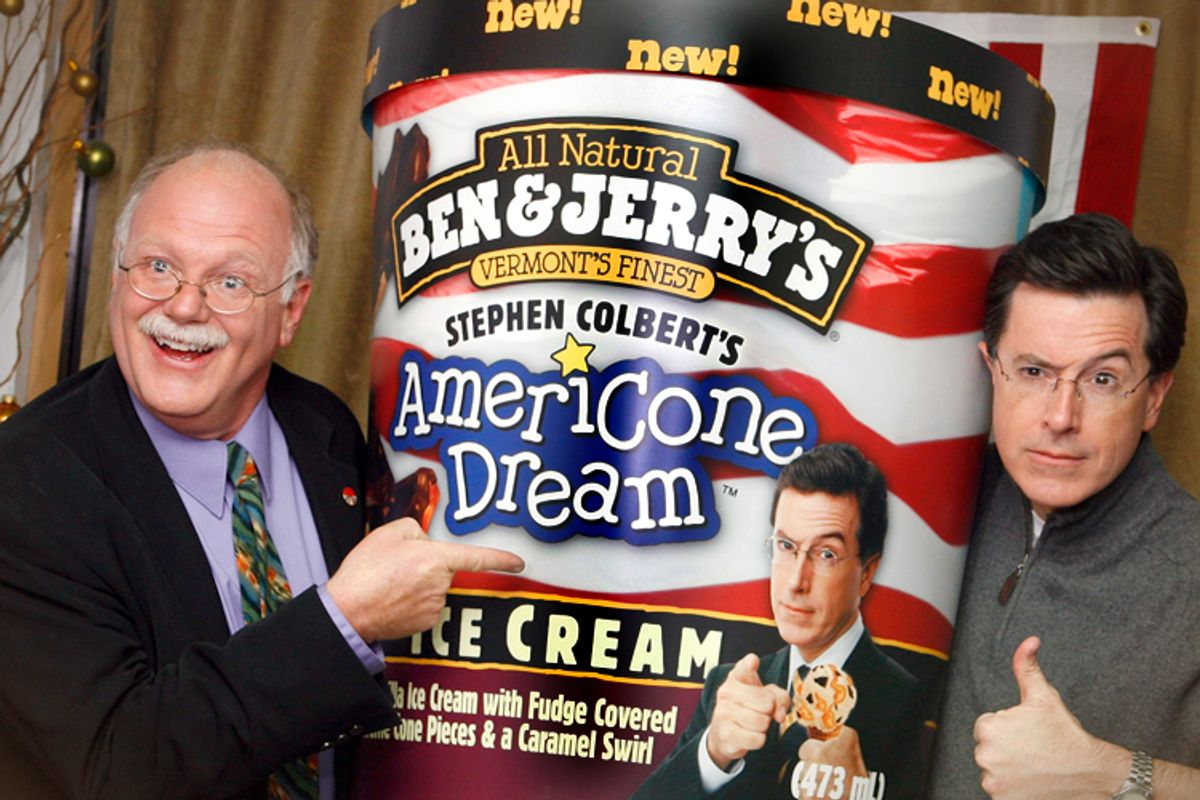 The Ben & Jerry's co-founder  has devoted himself to various political causes over the course of his career; this summer, it's a quest to remove corporate money from politics. After the broad interpretation of money as speech in the Supreme Court's Citizens United opinion, Cohen is among those pushing for a Constitutional amendment for campaign-finance reform.

Cohen's protest is taking an unusual form -- the Vermont native is spending part of his summer traveling the nation with a rubber stamp, encouraging Americans to stamp their money with messages including "Not to be used for bribing politicians." He recently hit New York's Union Square and has delegated the truck to hit music festivals; it's already toured with Crosby, Stills & Nash in the month of May.

While the quest seems quixotic -- amendments to the Constitution face an uphill battle in the first place, even when they're not voted on by politicians whose very presence in office depends on that which they'd outlaw -- the presence of money in politics, post-Citizens United, has lately been a hot topic. Consider, for instance, the vast sums spent on the 2012 election by single buyers like the Koch brothers or Sheldon Adelson. Recently, the New Yorker's Ryan Lizza tweeted a sad vignette about a congressman (potentially a New York Democrat) already begging for donations on the phone. The next House election is, recall, in November 2014.

We spoke to Cohen, who sold his company to corporate giant Unilever in 2000, about how he's hoping to assemble a critical mass, whether Vermonters are out of touch, and what Ben & Jerry's can do to fight the obesity epidemic.

How's the crusade going so far?

It's pretty amazing, it's going really well. We were at the Clearwater Festival north of New York. This past weekend we were at the Electric Forest Festival in Michigan. Well, I wasn't there, but the people who went got to enjoy some nice music.

Being from Connecticut, I can kind of sympathize -- but I think people from Vermont are often dismissed as out-of-touch, effete liberals who don't get "real America." Have you run up against that stereotype, and does it bother you?

Not at all. I think people in Vermont are down-to-earth, reasonable, rational people. There's this farm ethic that's about being self-sufficient and doing things on your own and doing things in a way that's thrifty. It's a small state; you know your political representatives and see them around. It's not that hard to see and talk to them. In a big state it's really hard to get a high enough percentage of people together to have any effect on the politics. In Vermont, you dont need many people to be a big crowd.

So given that most people in America, unlike Vermonters, don't know their representatives, how can they get a consensus and get politicians to act?

This issue of getting money out of politics is something that eighty percent of the population wants to do. They all understand that the system is broken and it's the money in the system corrupting it. And people think it's kind of hopeless. In Vermont -- like fourteen other states -- we passed legislation.

The beauty of making your voice heard by stamping money is that it's something that anybody can do, anywhere, anytime. You can live in the littlest rural hamlet or the biggest urban city. The big problem with money in politics is that they've [the Supreme Court] said money is free speech. When money is free speech, they're [corporations] able to buy so much amplification and advertising. Corporations make their money talk by bundling their money together and shoving it at politicians. Regular people can make their money talk by using it as a way of communicating a message, making their voice heard. Regular people can make their voice heard by stamping money. Every time you put a message on a dollar bill, it gets seen by 875 people. If you stamp five bills a day -- and take weekends off -- in a year you'd have 1 million impressions. We call it a petition on steroids. Normally, the only thing you can do if you're upset is sign a petition -- and no one sees it except, hopefully, the intended target.

Why would politicians who got into office on corporate money vote against it?

As someone who sold your namesake company to Unilever, isn't it a little hypocritical to rail against corporations?

We understand that Unilever does not make donations to politicians or to parties. It's not part of the problem. Ben & Jerry's is out there fighting for GMO labeling -- the proposition in California. [That state's Proposition 37, which failed at the ballot box in November 2012, would have required the labeling of food products that had been genetically engineered; it was opposed with heavy donations from food companies.]

Ben & Jerry's was for GMO labeling and Unilever was against it. I didn't like that at all. Unilever might be moderating their stance on GMO labeling. We might have had an effect on the giant.

Do you have any day-to-day responsibilities at Ben & Jerry's?

Do you feel uncomfortable with the idea that your political activism might turn off some potential ice-cream buyers?

No! Ben & Jerry's has taken a bunch of political stands over the years. This one is one that has the highest percentage of people that agree with it. Eighty percent of the population agrees, the other twenty percent... I don't know! This particular issue is an exception because it's so popular. I operate by the 30-30-30 rule: 30 percent will buy more ice cream because they really liked our stance, 30 percent don't care, and 30 percent will buy less. So it kind of evens out.

Are there any issues that are too hot to handle?

Two hot buttons are abortion and gun control. I don't think -- we've never taken a stand on either one of those things, but I know that we did something sometime that upset a bunch of NRA members. [The company is on the National Rifle Association's "enemies list," made after the school shooting at Sandy Hook.]

Have you considered introducing politics to the flavors of your ice cream? Cherry Garcia is all well and good, but nonpartisan.

There have been some political flavors. We had a flavor called American Pie -- and it had a pie chart of the federal discretionary budget on it and it advocated shifting money out of nuclear weapons and into education. The first political stand we took on our packaging was back when we came up with a chocolate-covered ice cream pop on a stick called a Peace Pop. This was before the end of the Cold War. We decided to use the packaging as media and instead of talking about how great this thing is you're about to eat, we proposed "One Percent for Peace," which was an initiative to shift one percent of Pentagon spending into peace through understanding activities between the people of the U.S. and the Soviet Union. And right after that the Cold War ended, so it was a great success.

Do any politicians currently in office share your views?

I feel like the same as for any elected official that does not advocate an amendment to the Constitution to get rid of money in politics, it's a lost opportunity. There's been a bunch of senators who've been pretty adamant about it: Al Franken, [both Mark and Tom] Udall, [Bernie] Sanders, there are twenty-some odd Senators that have signed on to a proposed amendment to get money out of politics, then there's about 100 members of the House.

Did you ever consider running for office?

I'm one of those guys that can be more effective outside than inside.

Your political stands are inspiring, but it's hard not to consider the ongoing obesity epidemic as an issue worthy of consideration. Has it been difficult to contemplate this issue given your fortune earned from selling ice cream?