Creative destruction, government snooping: Is the Internet worth it?

We can't "repeal the Internet." But it has unleashed scary forces -- and reasons for a Silicon Valley backlash 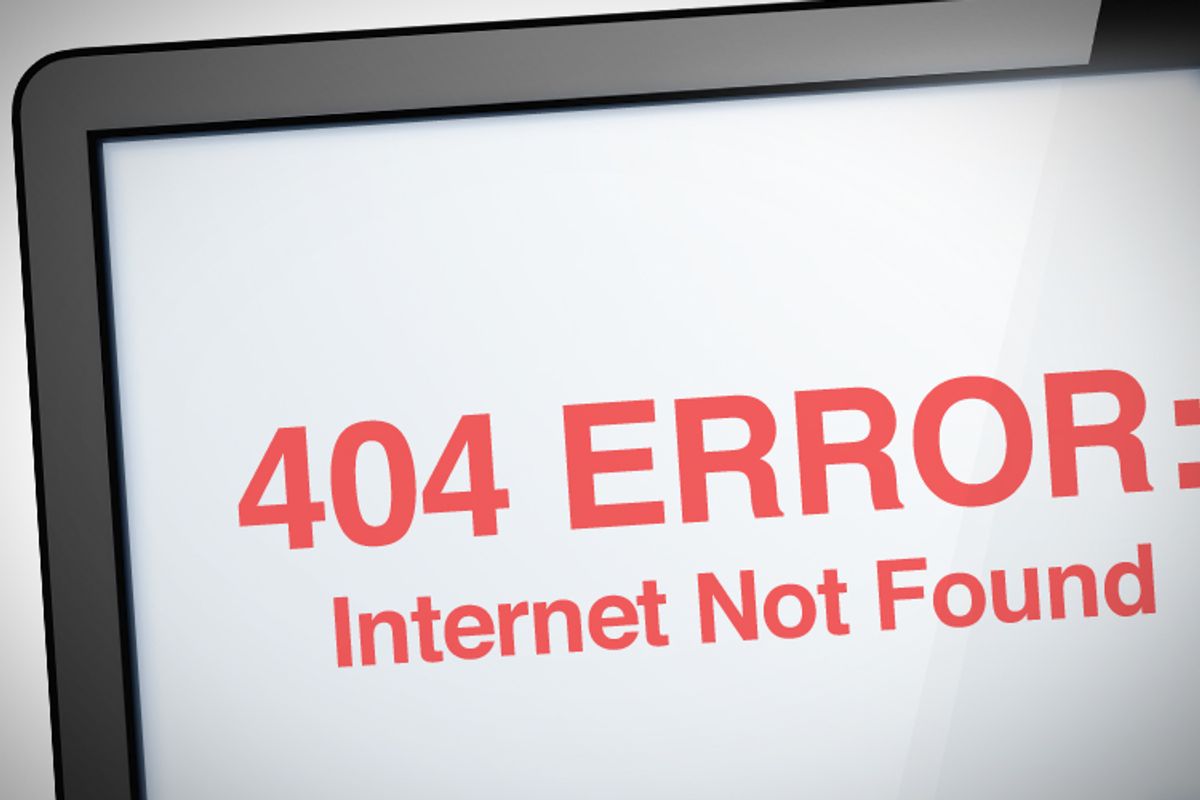 "If I could, I would repeal the Internet," wrote Washington Post columnist Robert Samuelson on June 30. "It is the technological marvel of the age, but it is not -- as most people imagine -- a symbol of progress. Just the opposite. We would be better off without it."

When "the Internet" heard this news, it didn't know whether to laugh, cry, or get really pissed off. The Internet is the opposite of progress!? Them's fighting words! Pretty bold talk from a writer who has been covering business and economic affairs for nearly four decades. You wanna repeal the Internet? Why not uninvent the Gutenberg printing press, while you're at it?

Samuelson cites the danger of cyberwarfare as his primary reason for wanting to roll back the tide. The Internet has created "new avenues for conflict and mayhem," he writes, and even though we can't point to a whole lot of lives lost as a result of the Internet, well, it could happen!

Samuelson has been justly mocked for his fear-mongering. As many have pointed out, all new technologies bring with them the potential for chaos and trouble. Imagine how much mass slaughter we could have avoided without the Industrial Revolution? And why stop there? I've heard it argued that the transition from hunter-gatherer societies to settled agriculture made possible social stratification and theocratic despotism. Agriculture: We would be better of without it. Repeal grain!

But I am not here to make fun of Robert Samuelson. When he moderates his thesis, in his last paragraph, and states that "The Internet’s virtues are overstated, its vices understated." I find myself nodding my head. There is new evidence, every day, of the mixed blessings delivered by the Internet. Just to pick one example from current headlines: The vast advances in government surveillance capability that we've all been wringing our hands about lately are directly attributable to the fact that our lives are now inextricably lived online. No question, the sharing economy has a dark side.

Of course, the notion of repealing the Internet is ludicrous. The most gaping hole in Samuelson's column is his failure to identify any meaningful plan of action that would progressively address the changes wrought by "The Internet." "If I could repeal the Internet I would, but I can't, so I'll just whine" is a terrible excuse for a column. But even on this point, I feel sympathy for Samuelson, because progressively addressing the downsides of "the Internet" is miserably difficult. Even when we think we know what we should do -- in the case of surveillance, tougher privacy laws -- it's not clear that our solution will actually fix anything.

I might be predisposed to take Samuelson more seriously than the rest of "the Internet" because the grand narrative of change wrought by the Internet on society feels increasingly personal. A few days ago, I attended a gathering at a San Francisco watering hole held in honor of Tim Redmond, a longtime fixture of progressive Bay Area journalism. He had recently been fired from his position as editor in chief of the San Francisco Bay Guardian -- a direct result of a recent change in ownership at the venerable local weekly. My first job in journalism was at the Bay Guardian, so even though it had been literally decades since I hung out with the Guardian crowd, I decided to stop by.

Maybe I was trying to assuage my guilt. In January 1994, I quit the Guardian to devote myself to writing full-time about the Internet for anyone who would pay me. My last cover story for the Guardian was a pre-World Wide Web tutorial: "How to Connect to the Internet." You want to blame someone for hyping the Internet? I am available.

At the time, I didn't realize I was a rat jumping from a sinking ship -- or that, even worse, I was throwing hand grenades behind me as I went over the side. The Bay Guardian was flourishing when I left. But while the Internet has been tough on all print publications, with each day that passes it is more obvious that the free weeklies are absolutely getting killed. The smartphone delivered the coup de grace. In the Bay Area, no one grabs a weekly to read on BART or to peruse while having a cup of coffee. Everyone just pulls out their phone. Jeanne Brugmann, who co-owned the Guardian with her husband, Bruce Brugmann, told me that she had never imagined that they would ever sell the Guardian, but the economics just got too tough. I heard variations of the same story from nearly everyone I talked to that night. Reporters, critics, photographers, copy editors -- they were all struggling to make ends meet cobbling freelance gigs together that generally paid worse than they had been able to get 20 years earlier. Just about everyone there was packing a smartphone, but if you could have taken a vote that night on whether the Internet should be repealed, I'm not sure what the outcome would have been.

One way or another, journalism will survive -- there's too much obvious demand for the product for it to ever disappear, and if demand exists, one way or another, people will be able to make a living satisfying it. But when I think of how blithely I evangelized the Internet in the months and years after I quit the Guardian, I feel chastened. Progress is bumpy as hell.

And nowhere is that more in our face than in the current surveillance drama. In the New York Review of Books, former prosecutor Kenneth Roth points out that the sheer logistical impracticality of gathering information about ordinary people in the pre-Internet era offered a de facto protection of privacy.

Back when I was a prosecutor, the human capacities of investigators meant that even upon accessing metadata, there was still considerable practical protection for privacy. It took little effort to obtain a judge’s order for a “pen register” -- a device that recorded the numbers a suspect called -- and even less to subpoena records of these numbers from a phone company. But analyzing that information was a time-consuming, manual affair. Similar practical limits governed physical surveillance. Because physical movement around town is public, the courts assumed there was no privacy interest in one’s whereabouts, so investigators were free to monitor a suspect’s movements without a court order. But clandestine monitoring was so costly -- typically requiring teams of agents working long hours --that the government’s capacity to do much of it had practical limits.

But this is no longer true.

Today, by contrast, when I look at the government’s large-scale electronic surveillance of private communications, I see an urgent need to rethink the rationale --and legal limits -- for such intrusion. The government now has the technology to collect, store, and analyze information about our communications cheaply and quickly. It can assemble a picture of everyone we call or email -- essentially our entire personal and professional lives -- with a few computer commands. In addition, given the pervasive presence of geo-locators on our smart phones, the government is able to electronically monitor and reconstruct virtually every place we visit -- a capacity that will only increase with the growing practice of photographing our license plates and the rapid improvement of facial-recognition software in combination with proliferating video cameras.

Privacy expert Ashkan Soltani has been beating this drum for years. In TechReview, he shows how Edward Snowden's leaks have confirmed his thesis that technological advances have lowered the costs of surveillance and thus resulted in a dramatic loss of privacy.

The leaked documents show how the NSA has taken advantage of the increased use of digital communications and cloud services, coupled with outdated privacy laws, to expand and streamline their surveillance programs. This is a predictable response to the shrinking cost and growing efficiency of surveillance brought about by new technology. The extent to which technology has reduced the time and cost necessary to conduct surveillance should play an important role in our national discussion of this issue.... Spying no longer requires following people or planting bugs, but rather filling out forms to demand access to an existing trove of information. The NSA doesn’t bear the cost of collecting or storing data and they no longer have to directly interact with their targets. The technology-enabled reach of these programs is vast, especially when compared to the closest equivalent possible just 10 years ago.

Both Roth and Soltani note that our laws have not kept pace with technology. This is the crucial point. There's no going home again, whether to a hunter-gatherer free-for-all or the days before texting and Reddit existed. There is no repealing "The Internet." We can only go forward, and that means, in the case of surveillance, passing new laws that constrain the government's powers. As citizens, we have to step up.

How does that principle extend more broadly, as we review all the ways that technological progress is positively and negatively affecting society? This is a challenging question, because one of the lessons of "the Internet's" evolution is that it is far from apparent that we have the power to legislate the socially approved consequences of technological change. Even in the case of privacy laws, the fact that something might be hard to do is probably a stronger bulwark against it happening than whether that something is legal or not. We can't pass a law making free weeklies profitable, can we?

Seems unlikely. And here is where it is easiest to feel sympathy for Samuelson-style anxiety. One possible explanation for why the backlash against Silicon Valley has gathered serious momentum over the last year is that we are increasingly sensing that we have no idea where this techno-roller coaster is ultimately headed. There's a sense that things are out of control. Our growing uneasiness doesn't jibe well with all the hype about how the world is being made a better place by a proliferation of smartphone apps. Sean Parker gets a lovely wedding; we get spied on and laid off.

Maybe Edward Snowden's greatest contribution to society will end up being the way in which his leaks crystallized our previously vague sense that something was awry, that there was a real price to pay for the wondrous capabilities of our "Star Trek" communicators. If we know the price, we can start to figure out if what we are gaining is worth what we have lost.