The right likes massive programs -- if they detain people rather than give them healthcare. Next: Talking drones? 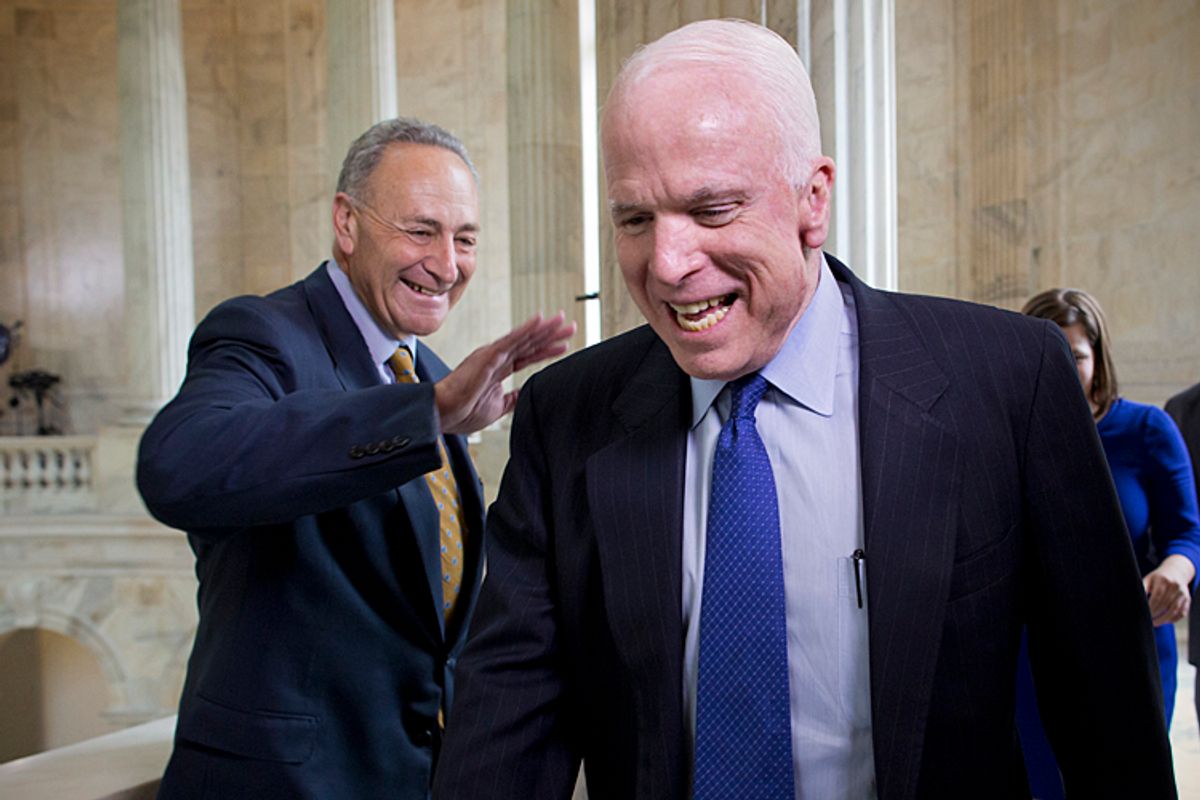 The delicate immigration reform negotiations in the Senate were supposed to pass a bill that allowed undocumented immigrants to earn American citizenship -- because that is the entire point of doing immigration reform, for reformers. It is also, apparently, supposed to make the process, and America's immigration system in general, as inconvenient as possible -- for conservatives who wish to see immigrants punished for their border crossing -- without making the process so punitive that liberals could no longer support the bill.

Late in June, two Republicans, Sens. Bob Corker (Tenn.) and John Hoeven (N.D.), inserted an amendment into the Senate bill to strengthen security at the American border with Mexico. No Democrats opposed the measure in a "test vote" before the Senate's passage of the larger bill. The amendment's proposals are referred to as a "border surge," because "surges" are a great thing in Washington ever since "the surge worked" became a very popular catchphrase for a while. (Washington is full of very simple-minded people, on the whole.) So we will "surge" the border, just like we "surged" Iraq, and, like Iraq, we will Win the War, against Mexico and Mexicans.

Basically the "border surge" is a very expensive new expansion of a massive government program, only it's the sort that conservatives like because it involves detaining people instead of giving them healthcare or something. The "surge" is a massive military buildup along the border, involving 700 miles of fencing, 20,000 new border agents, and more drones, perhaps even ones fitted with "nonlethal weapons," for the Border Protection Agency to loan out to various other law-enforcement agencies. It will install, at various points along the border, an exciting array of new infrastructure and equipment of the sort usually not seen outside of actual war zones. Many lucky communities will soon have multiple new "fixed towers," dozens of "fixed camera systems (with relocation capability), which include remote video surveillance systems" and "mobile surveillance systems, which include mobile video surveillance systems, agent-portable surveillance systems, and mobile surveillance capability systems," and hundreds of new "unattended ground sensors, including seismic, imaging, and infrared." Chuck Schumer described the entire deal as "a breathtaking show of force." Even actual border-patrol agents are sort of confused by the proposal, which will double their ranks. "I'm not sure where this idea came from, but we didn’t support it, and we didn’t ask for it," their union vice president told the National Review.

The whole thing will cost $38 billion. Fun fact! House Republicans recently attempted to cut $20 billion from the federal budget for food stamps. The measure failed when many Republicans decided the cuts weren't large enough. But there is always money for new unattended ground sensors!

This week, two things happened as a result of the Corker-Hoeven "border surge" amendment. First, the Congressional Budget Office "scored" it. The CBO found that it will be expensive. Second, it found that under the proposal, illegal immigration "would be reduced by between one-third and one-half compared with the projected net inflow under current law." Success! This, honestly, seems like one of those findings that the CBO just sort of made up. There will be ... half as much illegal immigration, we guess. "CBO once again vindicated immigration reform," Chuck Schumer said.

Second, Rep. Filemon Vela, a Democrat from Texas, quit the Congressional Hispanic Caucus, after the caucus failed to do anything to stop the amendment from passing. He posted an explanatory message on his Facebook wall, saying:

I grew up on the border, and until recently, border towns in Mexico and the United States shared a common economic and cultural vitality. Now we have border fences, and they don't work. They harm the environment, inconvenience everyone and promote fear between neighbors.

And: "Mexico is a friend, neighbor and one of our top three trading partners. The US-Mexico border should not remind us of places like East Berlin, West Berlin, North Korea and South Korea."

(As Molly Ball reports, Vela's decision came after two immigrant advocacy groups turned against the Senate bill for its inclusion of the Corker-Hoeven proposal.)

The best hope for getting something that resembles the Senate bill through the House is with a great deal of Democratic support. This probably isn't a great time for the bill to start dropping liberals. Especially if the House ends up passing something after all, and then security is "beefed up" even more in conference with the Senate. ("Let's say, 100,000 new agents, plus maybe some tanks, and also the drones can talk now.")

Still, it looks like the price for a legal route to security for millions of undocumented Americans is the total militarization of vast swaths of the country at great expense, simply so that some conservatives feel we're being sufficiently "tough."