A more "grownup," "leveled out" Mayer emerges -- and is still insufferable 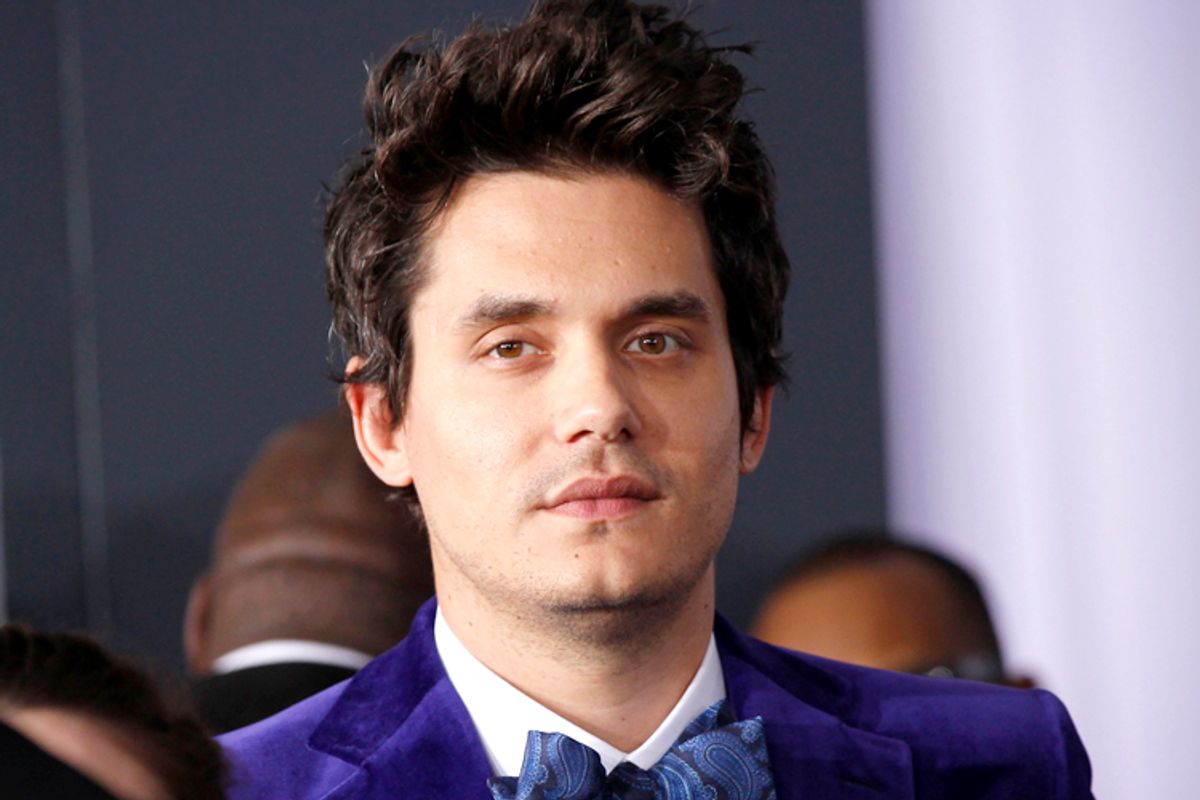 To be fair, John Mayer may not be quite as obnoxious as he was three years ago. But as his Friday appearance on the "Today Show" proves, that doesn't exactly move him off the cringe list.

It was in 2010 that Mayer seemed to achieve peak douchery, culminating in a Playboy interview with Rob Tannenbaum in which he famously declared that his penis was a "white supremacist," that Kerry Washington was "superhot, and also white-girl crazy" and that Jessica Simpson was "sexual napalm." For good measure, he also dropped the N-word and several spectacular opinions about Jews, gays, and black people. Since then, he's had relationships with Katy Perry and Taylor Swift and written more music, all while battling a near career-ending throat granuloma. Then, a year after declaring that he'd been "really humiliated" by Taylor's Swift's confessional "Dear John," calling it "a really lousy thing for her to do," he emerged last month with a new song and a reignited public profile. And what do you know? "Paper Doll" sure sounds like a very public response to that humiliating Swift song! Remember when Swift, who this spring released a single called "22," sang in "Dear John" that "They said run as fast as you can"? In his new one, Mayer declares, "You’re like 22 girls in one, and none of them know what they’re runnin’ from." Burn.

On Friday's "Today," Mayer, making his first nationally televised singing performance in the nearly three years since his vocal woes, proved he is still very much in full John Mayer mode. In an homage to both John Rambo and Rhoda Morgenstern, he wore a long bandana that cascaded down the side of his head. He also wore a blue blazer and a necklace, possibly strung together with the broken hearts of his conquests. And the man who in 2010 admitted, "I can’t change the fact that I need to be 32… I want to dance; I want to get on an airplane and be like a ninja," described having to get Botox in his vocal cords by saying, "That's being a grownup…. sitting there and dealing with that." He also assessed his life now as "leveled out," explaining, "I'm the right age and the right soul, all that stuff." And he answered speculation about the inspiration for "Paper Doll" by saying, "Songwriters write songs because of people, about people. Anything someone else wrote is their reception of a song. I don't get involved; it's none of my business."

Whatever one thinks of Mayer's musical output, it's no small thing to come back from surgeries and serious health concerns, and it's admirable that Mayer gamely insists, "I always knew there was going to come a day when I was going to sing again." And he didn't mention his penis once morning television. For that he is to be commended. But the new, allegedly more mature and "leveled out" man still reeks of Eau De Tool. What kind of guy says he's "the right soul"? What kind of guy writes a song about a woman and then coyly says, "I don't get involved?" What kind of guy dresses like he's urironically trying to be Rob Lowe in "St. Elmo's Fire"? Mayer carries about him the air of a guy who brings his guitar to parties, a man who just might describe you as his "lover" and ask if he can come over to "make love" to you, the earnest yet entitled man-child who regards not wearing shoes as a form of political protest.

Sure, the Prancercize video was a nice touch, and on "Ellen" this past spring, he did tactfully describe his relationship and breakup with Katy Perry as "very private." That's fine. But then he had to throw in sagely that "I'm on the same journey as everybody else." And earlier this year, he'd described his situation with Perry by confessing, "For the first time in my life, I don't feel like I'm in a celebrity relationship. It doesn't feel that way to me, and great, I'm glad. For me, it feels like something that's very human." So to recap: in his mid-thirties John Mayer had his first "human," non-celebrity relationship. With Katy Perry. He's like the male Gwyneth Patrow – the more down to earth and keepin' it real he attempts to be, the more insufferably uncomfortable to watch he becomes.

Of course, Mayer is far from music's only douche. In fact, we seem to be hip deep in a veritable Summer of Douche. But Mayer is a specific and unique kind of douche -- the kind who brags of being "grownup" and "private" while singing bitterly about the "little" paper doll who ran away. And say what you will about Robin Thicke, you know he wouldn't be caught dead in a bandana.