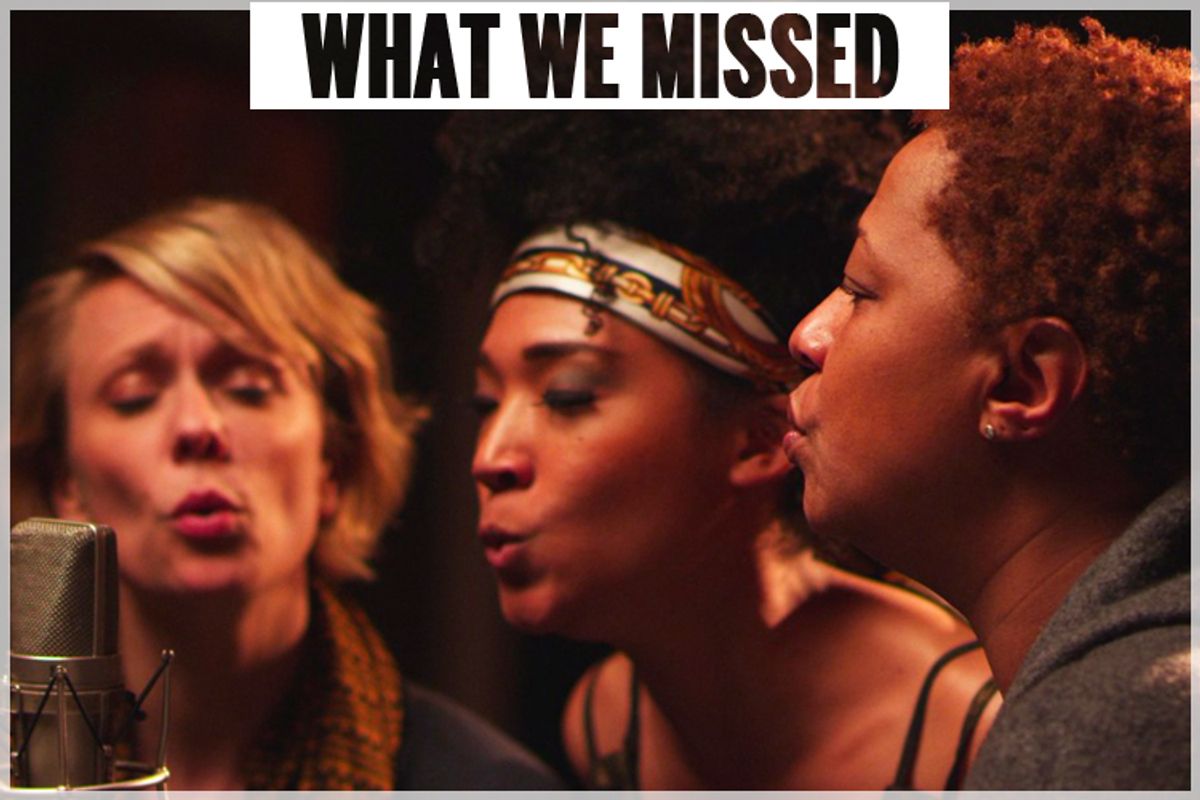 New movies still in theaters, or coming to home video, that we missed on first release.

Morgan Neville’s wonderful documentary “20 Feet From Stardom” provides an answer to one of the most troublesome questions in pop-culture history: What do the African-American women who so often sing background vocals on rock ‘n’ roll records make of that uncomfortable line in Lou Reed’s “Walk on the Wild Side”? You know the one I mean, the expression of rock’s weird racial dynamic, or commentary on it, or whatever it is: “And the colored girls go/ Doo do doo doo do doo doo do doo …” Well, the women Neville talks to, at least, love it. As one of them puts it, it’s a tribute to their power – the hidden power that black women held for many years in a musical form that had become mostly white.

I finally caught up with “20 Feet From Stardom,” which is now spreading into broad national release and looks like the sleeper documentary hit of the summer. And it’s no wonder – this is one of those moving, tragic and triumphant secret histories of American culture where the biggest surprise is that no one’s told it before. While longtime Phil Spector vocalist Darlene Love was actually a recording star – albeit a shamefully exploited one – and has performed “Christmas (Baby Please Come Home)” on David Letterman’s show for the last 26 years, most of the women in “20 Feet From Stardom” are known only to hardcore music fans.

I knew, for example, that Merry Clayton had sung the electrifying, ultra-high backing vocal on the Rolling Stones’ “Gimme Shelter” – one of the most obvious examples of a background vocalist dominating a song – but I didn’t know that Clayton was also among the background singers on “Sweet Home Alabama.” She had misgivings about both songs: The first because of the “rape and murder” lyric and the second because – well, because it was “Sweet Home Alabama.” (She says she became convinced that the members of Lynyrd Skynyrd had no racist intentions.) Anyway, that’s an awful lot of classic-rock radio play, and records sold, for someone who was paid a day rate as a session musician.

Like most of the singers in the film, Clayton learned to sing in African-American church choirs – just because it’s a cliché doesn’t make it untrue – and assumed for much of her career that background gigs were a stepping stone toward her own career as a recording artist. As seen in archive footage from the mid-‘70s, she was a powerful and charismatic singer and bandleader in a funk-rock vein, and there’s no obvious reason why she never became a star. As Sting explains to Neville’s camera, it’s never about fairness or justice, and it’s not always about talent either. Some people aren’t ruthless or driven enough to become pop stars, and others are just unlucky or victims of bad management and bad timing.

Besides Sting, Bruce Springsteen, Stevie Wonder and Mick Jagger also sit down for interviews in the film, to discuss this ambiguous phenomenon that has done so much to support their recording and songwriting. Although well known for his reluctance to ponder the past, Jagger sounds just a bit rueful talking about Claudia Lennear, who was his background vocalist and constant companion during the “Sticky Fingers”-“Exile on Main Street” period. Lennear, who was purportedly the inspiration for “Brown Sugar” and once posed for Playboy, has been out of the music business for many years, and now works as a language tutor at a Southern California junior college. “Mick and I used to have so much fun!” this rather staid-looking woman in late middle age says fondly. “Wearing each other’s clothes and doing all kinds of crazy things.”

Other singers like Lisa Fischer and Táta Vega have had long careers in the music business, just not the careers they expected or wanted to have. Fischer, an exorbitantly talented jazz and R&B singer, actually won a Grammy in 1991 for the hit single “How Can I Ease the Pain,” but didn’t have the careerist killer instinct to follow it up with another hit. She continues to perform as a jazz singer, but has made her living for years by touring with Tina Turner, Luther Vandross and the Rolling Stones (she has sung Merry Clayton’s part on “Gimme Shelter” many more times than Clayton did). Vega, a longtime backup singer with Stevie Wonder, Chaka Khan, Michael Jackson and others, had a Motown deal and recorded several albums – but she says today that she’s grateful she never became a star, because she’d probably have wound up overdosing in some hotel room.

While “20 Feet From Stardom” is first and foremost an irresistible delight for music lovers, and a tribute to the spirit and musical passion of these underappreciated women, it’s also a thought-provoking reflection on the peculiarities of pop culture. As Neville’s title suggests (I should mention that I knew him in San Francisco, many years ago), background singers are closer to the star than anyone else, but also further away. Their job is to melt together in anonymity, deliver the harmonic and melodic hooks that everyone remembers and then disappear, while the commanding presence in the spotlight gets the credit and the money. When Judith Hill, the young singer who dazzled the world at Michael Jackson’s funeral but has been unable to parlay that moment into stardom, took a gig backing Kylie Minogue on TV, she wore a wig in hopes that her fans wouldn’t recognize her. Even in the 21st century, there’s still some stigma attached to being one of the “colored girls.”

Am I seriously recommending a movie that includes several minutes of a museum docent’s lecture on the paintings of Pieter Bruegel the Elder? You bet I am, when the movie is as wistful, delicate and rewarding as Jem Cohen’s “Museum Hours.” This lo-fi, sharply observed tale of two strangers who cross paths in Vienna’s grand Kunsthistorisches art museum – which without question has the finest collection of Bruegels in the world – blends documentary and fiction without showing off about it, and packs an emotional wallop that pushes it well beyond film-festival esoterica.

Cohen is a New York filmmaker who’s better known in the art world for his collaborations and installations than he is in the world of mainstream cinema. He's also done music videos for R.E.M., Vic Chesnutt, Godspeed You Black Emperor! and other alt-rock-type acts. “Instrument,” his experimental 10-year documentary about the Washington, D.C., punk band Fugazi, is the closest he’s ever come to anything you might call fame. So by his standards “Museum Hours,” which will play in most major American cities by the end of the summer, is pretty much “Jaws.” This is an exceptionally quiet film rather than a formally challenging or difficult one – you could think of it as a platonic, middle-aged take on “Before Sunrise” -- in which a stranded and broke Canadian visitor (played by singer-songwriter Mary Margaret O’Hara) makes an unlikely connection with an aging bohemian turned museum guard (Bobby Sommer, a veteran of the European punk scene).

Both O’Hara and Sommer give natural, unforced performances, but the fact that neither is a professional actor has the effect (if I can get theoretical on you) of decentering the dramatic elements, shifting the film’s focus toward a street portrait of rainy, autumnal Vienna and toward the Bruegel paintings that serve as text, subtext and metaphor. The great Flemish “peasant painter” was a revolutionary because he saw the ordinary details of life – children playing, women buying and selling food, people relieving themselves – as being every bit as noteworthy as that guy on his way to Calvary with a cross on his back. “Museum Hours” may seem like a small film at first, but by the time its over you’ll be immensely moved by the bigness of its generosity and vision.

”Museum Hours” is now playing in New York and Philadelphia. It opens July 19 in Boston; July 26 in Fort Lauderdale, Fla., and Pittsfield, Mass.; Aug. 2 in Detroit and Sarasota, Fla.; Aug. 9 in Denver and Miami; Aug. 16 in Los Angeles, Santa Fe, N.M., and Washington; Sept. 13 in Minneapolis; and Sept. 20 in San Diego and San Francisco, with other cities and home video to follow.

When academic and aspiring writer Laurence (played by the terrific French actor Melvil Poupaud) breaks the big news to his blustery, ballsy redhead girlfriend Fred (Suzanne Clément) – the news that he wants to become a woman – that’s not the end of their story but pretty much the beginning. It’s about 1990, and they’re going through a car wash in Montreal, and about to undertake a life-changing and sometimes traumatic adventure. There have been dramas about transgender people before (although not many), but none with the courage, ambition, craft and daring of “Laurence Anyways,” a breakthrough work for the young French-Canadian filmmaker Xavier Dolan.

Now that I’m praising Dolan, I can go ahead and admit that I had difficulty watching his first two films, the international art-house fave raves “I Killed My Mother” and “Heartbeats,” and found them self-indulgent and show-offy. (It wasn’t like anyone noticed them in the United States anyway.) Then again, Dolan made those movies when he was 19 and 20, respectively. His obvious talent and ambition would have been even scarier at that age if it hadn’t come with flaws. Nurtured by the peculiar cultural climate of Quebec, and showered with fulsome praise by European critics, Dolan was arguably given too much power and artistic freedom too young. Now, at the ripe old age of 24, he’s graduated to a different level. If “Laurence Anyways” still has some of the obsessive, artificial qualities of his earlier films – and, fair warning, is nearly three hours long – it’s also a work of tremendous empathy and craftsmanship, and you don’t quite have the same feeling that Dolan is working out his own adolescent psychodramas on the screen. (He doesn’t act in the film this time out, which definitely helps.)

Dolan’s technical gifts with camera, sound and music are startling (the soundtrack goes from Brahms to Depeche Mode to “Bette Davis Eyes”), but in “Laurence Anyways” the main focus is on his rich cast of characters, which beyond Poupaud and Clément includes Nathalie Baye as Laurence’s distant, imperious mother and Monia Chokri as Fred’s disbelieving sister. Wonder of wonders, Dolan turns the kind of gender-studies questions that could feel abstract or didactic – what does it mean to be heterosexual or homosexual? (Laurence is changing sex but wants to stay with Fred – does that make him a lesbian?) Do we love a person for his or her gendered physical attributes, or is there something more essential? – into an urgent, specific, tragicomic tale of real people in a real place and time.