Why do we look at images of death? 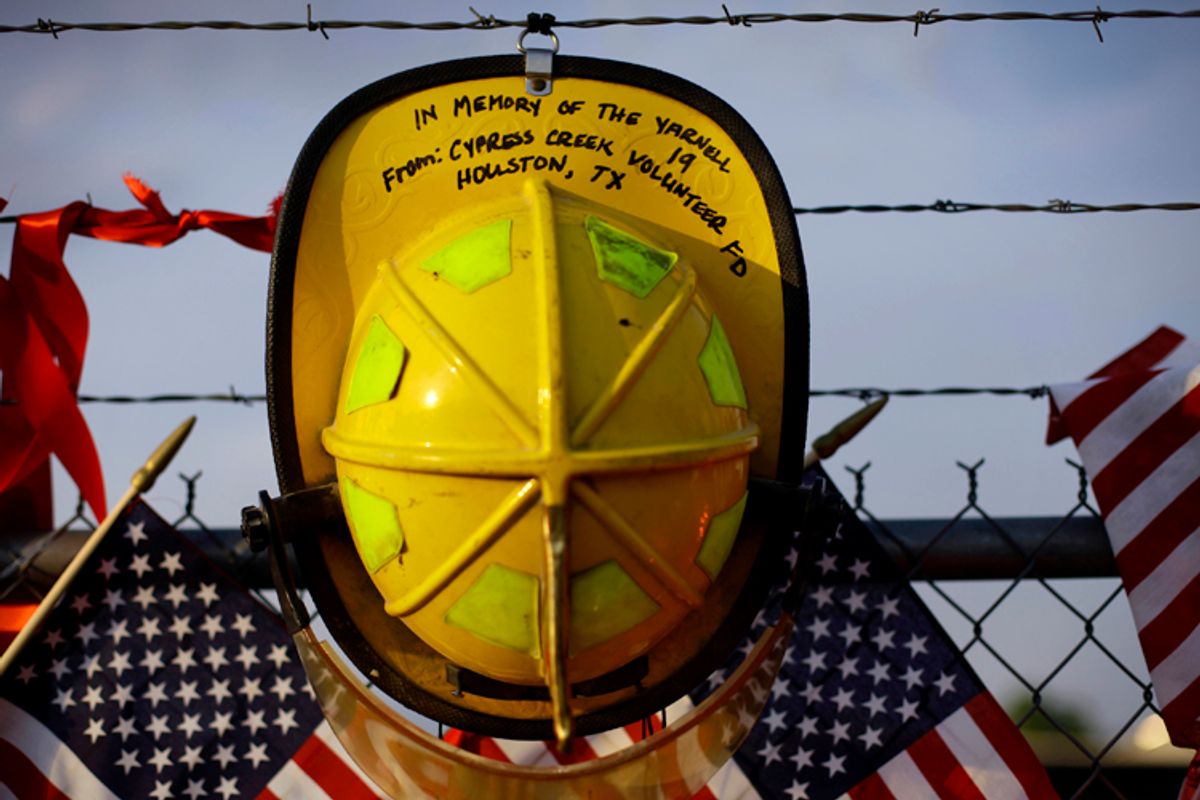 Images carry a visceral power that words can never match. But the same image can elicit a wide spectrum of responses. When you see a photograph of flags draped over body bags, do you see something that's illuminating – or exploitative?

On Thursday, that's the image that appeared on an unofficial Facebook page devoted to the Granite Mountain Hotshots -- the 19 Arizona firefighters who died in the Yarnell Hill fire. Earlier in the week, a recovery crew had arranged an impromptu tribute to the firefighters, draping the men's bodies with the flags and having an honor guard stand watch before the remains were taken to the medicinal examiner's office. The photo shows two neat lines of flag-covered bodies laid out on a patch of rocky terrain, a row of mountains behind them. As the Arizona Republic reports, it was posted with "no comment, no credit and no explanation about its source."

The image quickly struck a chord, garnering over a thousand shares in just a few hours. But the Prescott Fire Department’s wildland division chief, Darrell Willis -- who confirms that the photograph is real -- also told the Republic that it is "totally unauthorized" and "totally against anything we committed to." And Juliann Ashcraft, whose husband Andrew was among the dead, said she believed the image should be "exclusive to the family" but added, "It makes me sad, but it doesn’t make or break things in the end." The Arizona Republic, however, explained its choice to run the photograph, saying, "It depicts the respect given to these men who gave their lives to protect others."

The ethics of disseminating an image of death will always be tricky. The dead, after all, don't have any say in how their images are shared. In the end, a photo can be as crass as the New York Post declaring a subway rider "DOOMED" just to sell papers, or as powerful and haunting as a last embrace in the rubble of a factory. In May, photographer Taslima Akhter said of her instantly iconic image from the Bangladesh fire, "Every time I look back to this photo, I feel uncomfortable." But she added, "I feel the urge to share this pain with everyone. That’s why I want this photo to be seen."

We can thoughtlessly rubberneck at images of death, or we can choose to remember that it's a deeply intimate thing, to share in "this pain." To bear witness to a profound loss. No wonder then that some of the most iconic photographs ever taken – a Saigon prisoner being executed, a shocked student kneeling over a body at Kent State, an emaciated child and a vulture in the Sudan -- take us to that place between life and death. They show us the fragility of our humanity. They're humbling and heartbreaking. To look upon death can be, simultaneously, an experience that's both "respectful" and "uncomfortable." In fact, that's exactly what it ought to be. It's all in the eye of the beholder.