I was a home-school freak

Plenty of kids taught by their parents end up with great educations and social skills. I wasn't one of them 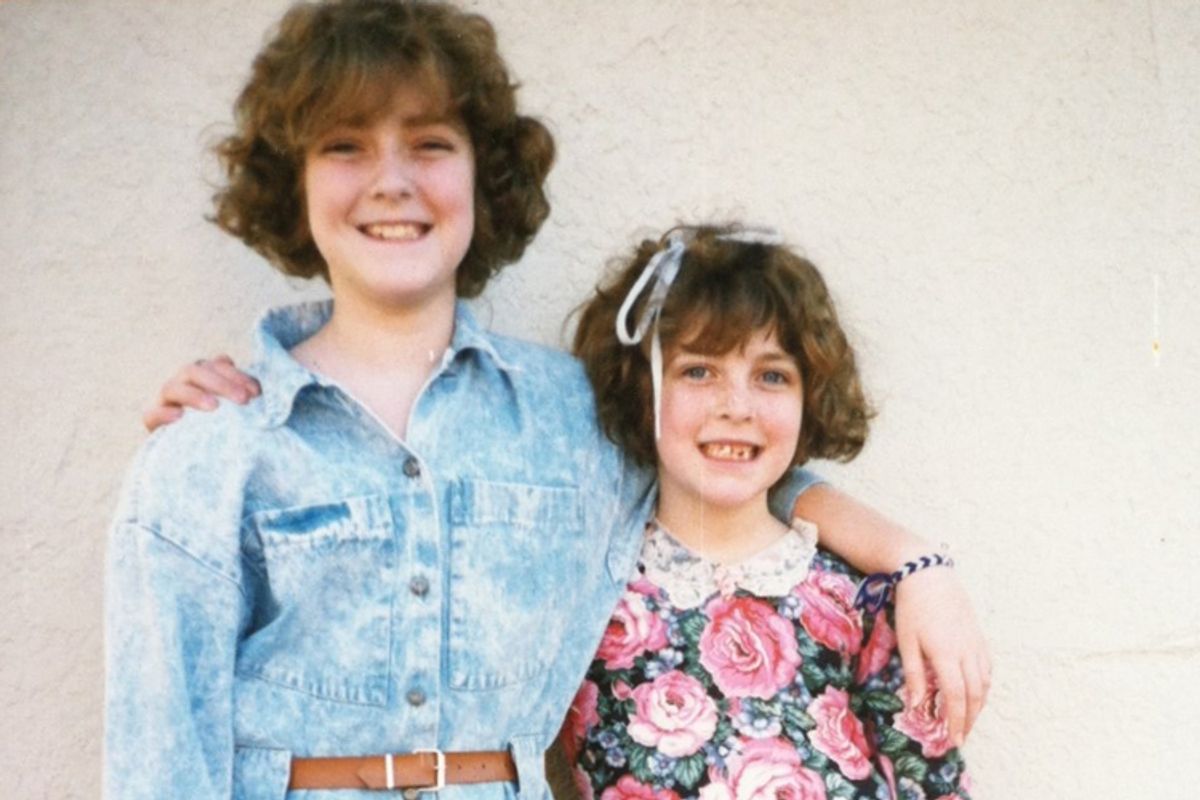 I was in the first grade when a troupe of dancing condoms changed my life forever. My older sister was in high school, and her sex education class had used a quirky ploy − people wearing condom costumes while gyrating onstage − to teach students about safe sex. My mother, a religious woman, was outraged. She cried about the state of the public school system. She complained to the principal. And when none of that proved useful, she decided her children would never be subjected to such inappropriate displays. My younger sister Sarah and I would be home-schooled.

My parents were not teachers. My mom hadn’t even graduated from college. But she was adamant that our minds remain free of such public school corruption as swearing and sex and drugs. And though she didn’t have training, she was undeterred. “If you can read, you can do anything,” she always said.

But my parents worked a lot. My dad had lost a fortune in a tax shelter when I was young, and he was forced to sell the family business. Since then, my parents had scrambled to get by. Dad was a tile salesman, Mom a security guard. She worked the graveyard shift to stay home with us during the day, but the long nights exhausted her, and we soon found out that “home with us” meant “sleeping,” so we remained largely unsupervised. When this new chapter of our education began, Sarah and I were 6 and 8, respectively. Little did we realize this “schooling” would last through high school.

Mom sometimes created lesson plans during the night for us to complete while she slept during the day, but she rarely checked our progress. Sarah and I preferred to watch Disney movies, singing along to “The Little Mermaid” and “Sleeping Beauty,” feeling lucky that we could watch cartoons while other kids our age were stuck in school all day. We were blissfully free of any sense that our education was being completely neglected.

In the early years, Mom ordered fancy textbooks from a Christian company in Florida, and they came in big cardboard boxes as exciting as Christmas morning. They had names like “God’s Gift of Language” or “God’s Gift of Math.” The shiny hardcovers and the inky, new book scent would excite us for the first week, then we would avoid school again. On the rare occasion when Mom was awake, she taught us simple science experiments found in magazines and took field trips to museums and factories. On the subject of sex ed, she was close-mouthed. It was, after all, the reason we were home in the first place. Reading us a Christian book on how the reproduction cycle works was the closest she came to explaining human sexuality, but there was no discussion of egg or sperm. Babies just happen when a man and woman “get married.”

Fortunately, Sarah and I liked to read, having been taught early by our mom and our older siblings’ blessedly austere habit of reading to us constantly. The stories encouraged us to concoct elaborate games that could go on for hours or even days. One time we converted the bed into a Conestoga wagon and played pioneers after reading “Little House on the Prairie.” We would play at crossing the Oregon Trail, telling our Cabbage Patch Kids to hold on tight when the Indians started chasing us. But our favorite pastime was to sit in front of the TV and watch movies.

Matters were further complicated by the fact that we lived right across the street from an elementary school. Mom instructed us to stay away from the windows, certain as she was that people would see us and snatch us away to become mindless public school attendees. We envisioned an imaginary truant officer like the child catcher from “Chitty Chitty Bang Bang,” with a long nose to sniff out children, a net to catch them, and a giant cage on wheels to transport them back to class. With this image in our heads, we closed the blinds, and for extra precaution, dropped to our knees and crawled under the windows during school hours.

When we felt brave, we would spy on the kids walking to and from school each day. They were such strangers to us: shouting and laughing in the sun, book bags bouncing on their shoulders as they recounted the day’s antics. We were terrified -- and envious. Terrified because we rarely spoke to other children our age, and envious because they got a normal life while we were trapped at home. Even when we were very young, we felt there was something shameful about the way we were being educated. We learned to avoid talking about it.

What we didn’t understand at the time was the real reason our mom chose to keep us at home. Two years before I was born, she carried a baby to term, but it was stillborn, the umbilical cord having wrapped around the child’s neck. My parents had a picture of this little blue sister in a frame next to their bed. Sarah and I were spooked by the image, but we would still dare each other to sneak in and touch it. After Hillary’s death, my mom had a miscarriage. When I was finally born, she never put me down. At least that’s the story I’ve heard about my infancy and also Sarah’s: She was exceedingly nervous that something would happen to us, and so she wanted us by her at all times. This is easy with an infant, but tricky as kids age. Home schooling must have seemed like a perfect solution.

As we grew older, we did occasionally crack open our books to feel smart and studious. This resulted in the slow completion of various textbooks, mostly those that involved reading. Math was our special enemy, as we were forced to go through the books alone with no one to instruct us. Mom attempted to explain algebra one day, but she couldn’t remember. “Be patient, Leslie,” she would say. “You have to keep trying.” But how could I keep trying to do something that looked like hieroglyphics?

“I hate math!” I launched my pencil across the room. “I’m never doing it again in my life.” My mom tried to soothe me. She bought an instructional videotape, and Sarah and I made fun of the tutor’s hair. But I was true to my word. I never did math again, and Mom never brought it up.

Our main source of social interaction came from our forced involvement in a Christian home school group. They met weekly to play sports and teach each other’s children. If a mother in the group knew Spanish, voilà! Built-in Spanish teacher. Mom hoped that being involved would expose us to new kids, but all it really did was draw attention to our shyness. Sarah and I hated those gatherings, because we knew we were different. None of those moms worked. They stayed home and taught lesson plans. They weren’t like our mother, desperate for rest after eight hours on her feet.

My worst memory of home schooling, though, is when we tried to break out of it. I was in the tenth grade when my dad started thinking that school would be good for college preparation. My mom, still haunted by the dancing condoms, persuaded him to send me to a private Christian school.

“Leslie, you’re going to Monte Vista!” Mom said one day, like I had won an all-expenses-paid trip to Hawaii. I was horrified: I didn’t know anyone. I didn’t know how I would do work in any of the classes. I cried and begged, but on the appointed day, I caught the bus to Monte Vista.

Sarah and I had picked out my “coolest” outfit -- denim overalls -- but at Monte Vista the girls wore little skirts and sweaters. No one spoke to me, so I pretended I was invisible. I didn’t understand anything in my geometry or chemistry classes, even as the other juniors followed along fine, so I was placed in a pre-algebra class with the remedial freshmen. I was humiliated to find that I still didn’t understand.

One day, on the hour-long bus ride, a boy sat next to me. It was the first person who had made any kind of contact for the entire month, but I was mortified. So I didn’t have to talk to him, I pulled a book out of my backpack and pretended to read.

When I got to school, I ran to the pay phone and begged my mom to pick me up. I didn’t want to be socialized, and I didn’t want to fit in. I wanted the same life we had always had: home with Sarah, curled up by our fireplace watching the same old movies.

Eventually, I did escape my hiding place. When we turned 18, Sarah and I both took the high school proficiency test, and miraculously passed. We enrolled in the local community college where we started out in the lowest, most basic math class the school offered, and worked through algebra and statistics, gleaning enough credits to transfer to a four-year college.

I realize that many of the nearly 2 million home-school students in the United States don’t have experiences like mine. They get sparkling educations, and come through the relative isolation with their social skills intact. But my childhood was different. For a long time, I was bitter about the choice my mom made. But whenever I question her, she says she made the best decision. And no matter what I think about how I was raised, it’s my responsibility to put my life together now.

And Sarah and I turned out OK. Unable to cling to each other, we were forced to make outside friendships. We even chose different majors -- she studied art history, and I, English and Marketing. Our social transformation was slow but steady. For a while, being forced to speak in groups made me feel like the blood was draining from my head. I felt panicked and paralyzed. But with enough practice, the fear diminished, and I feel at ease in social settings. I’ve stopped lying about my past, or trying to change the subject.

Now, if I tell anyone that I was home-schooled, they say, “Wow! I would have never guessed. I always thought home-schooled people had no social skills.”

And it gives me a secret thrill to know: That person thinks I’m normal. Leslie Patrick is a nomadic freelance writer currently based in Thailand. Her work has appeared in Marie Claire Australia, Monocle and The WIP among others. Read more on her website, www.lesliepatrick.com.