"The Lone Ranger" failed because it wasted money

With "The Lone Ranger," Disney lost big on a bad idea. But in Hollywood, failure's almost as good as success 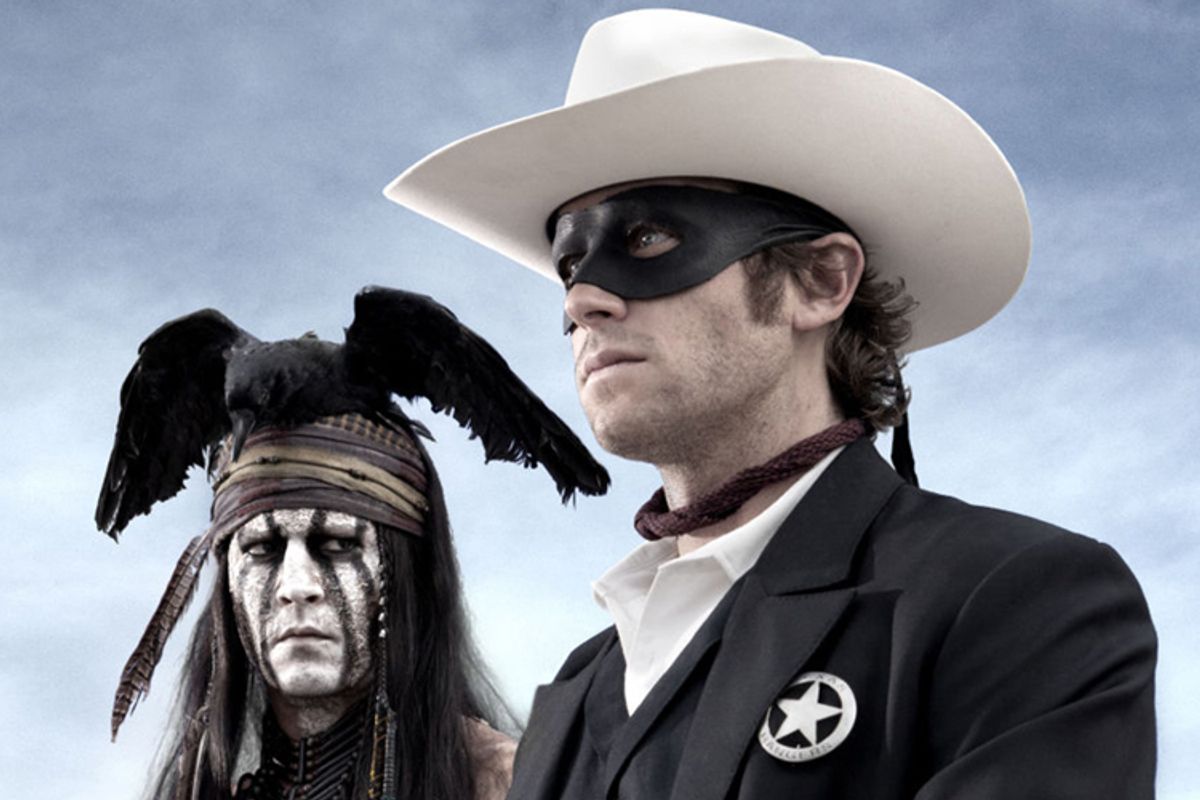 Here’s an original observation for you: The economics of Hollywood are massively screwed up. There’s been a good deal of virtual rending of expensive garments in the executive suites of Los Angeles County over the last few days, along with a fair bit of whispered Schadenfreude among onlookers, following the spectacular failure of Jerry Bruckheimer and Gore Verbinski’s “The Lone Ranger.” Even speaking as one of the few critics who didn’t think “The Lone Ranger” was terrible – see also my former Salon colleague Matt Zoller Seitz and Glenn Kenny of MSN – the fact that the movie was a box-office dud came as no shock. “The Lone Ranger” cost a reported $225 million to make, and it’s a western featuring Johnny Depp as the most stereotypical of all "good Indian" characters, speaking broken English with a dead crow on his head. The only mystery here is why anybody thought that sounded like a good idea in the first place.

I almost don’t know whether to give the Walt Disney Co. a medal for bravery or an award for extreme stupidity. You can’t say the Mouse hasn’t been trying, that much is for sure. The debacle of “The Lone Ranger” follows hard on the heels of the now-legendary 2012 bomb “John Carter,” which forced the studio to take a $200 million write-down, and the 2011 summer disaster “Mars Needs Moms,” a less expensive film but an even bigger flop. (“John Carter” also wasn’t awful, but “Mars Needs Moms” was. I believe the NSA has systematically scrubbed that movie from the collective human memory bank.) In all three cases, the writing was on the wall long before the movies reached theaters: “Lone Ranger” and “John Carter” were attempts to revive semi-defunct genres (the western and old-school, sword-and-sandal sci-fi) at immense expense, while “Mars Needs Moms” was a muddled effort to recapture some ‘70s Disney magic by targeting women and family audiences with a science-fiction film.

There’s a clinical term that describes people who keep on making the same mistakes and expecting different results, right? Oh yeah, it’s “crazy.” On one hand, you have analysts like Todd Cunningham of the Wrap urging Disney to stay away from so-called original projects and stick with established superhero or comic-book franchises. (And yes, I do find it amusing that movies based on a long-running radio and TV serial, or on the work of a massively popular science-fiction pioneer, are considered “original” material.) On the other, a different Wrap article by Brent Lang quotes an unnamed movie executive as saying that if Depp showed up at the door with an idea for a $150 million action-thriller in which he played an eccentric character in extreme makeup, not a single studio in town would turn him away. To me this looks like a structural problem, one that isn’t about westerns or science fiction or Disney or Johnny Depp. If, that is, this even is a problem. One could also understand big, stupid, money-losing pictures as a feature of Hollywood's production system, rather than a bug.

When I say that “The Lone Ranger” was a bad idea, by the way, I don’t mean that making the movie itself, warts and problematic Native American character and all, was indefensible. Sure, a little Johnny Depp goes a long way, these days, but God love the guy – he’s a genuine dose of old-Hollywood weirdness in a stultifying corporate environment, and on the whole I think the culture’s better off if he pursues his pet projects. I even liked “Dark Shadows” (go ahead and mock), and am on the record as believing “The Lone Ranger” is an intriguing and ambitious effort to blend an old-time adventure flick with a post-Peckinpah revisionist western. I do mean, however, that making that movie at that price – a sum that sounds shocking to ordinary people, and that could feed the inhabitants of several African villages for the rest of their natural lives – is irrational and idiotic on more levels than I can count.

If Messrs. Verbinski, Bruckheimer, Depp et al. had managed to “right-size” the picture, at a budget level of somewhere around $80 million or $90 million, let’s say, then all this fascinating postmortem analysis is not happening. The opening weekend gross for “The Lone Ranger,” even after all the dreadful publicity, was almost $50 million. Considered in the abstract, hey, that’s a lot of money! There is absolutely no question in my mind that the right combination of mid-level budget and oddball, niche-oriented marketing campaign could have produced a tidy little summer movie turning a tidy little profit. Everybody goes home happy.

But what fun is that? As anyone who happens to be reading this who works in Hollywood is already muttering, that’s a ridiculous scenario. It’s not that it couldn’t be done, but that Disney and Jerry Bruckheimer would never do it. The movie industry, at least at that level, operates on the same delusional principles as the military budget or Wall Street executive salaries, where bigness, waste and needless expenditure in all directions become markers of significance and ambition. To make “The Lone Ranger” for less money than Bruckheimer and Disney spent on the massively profitable “Pirates of the Caribbean” series might have been prudent. (OK, it definitely would’ve been.) But it also would have been seen, by the devoted priesthood of the industry, as being small-minded and grasping, as a failure to dream or an admission that the moviemakers really didn’t want the alluring devil’s candy of massive success and adulation, theme-park tie-ins and fast-food figurines and copyright-violation Tijuana parody T-shirts and all the rest of it.

While massive success is of course always preferable to massive failure, I suspect that in Hollywood massive failure may be preferable to low-level success or the boring possibility of breaking even. At any rate, it’s more newsworthy and more exciting, with a lot more narrative possibility: It prepares the way for an interval of wound-licking, followed by the stirring comeback. Sure, it’s possible that the careers of Bruckheimer, Depp and Verbinski will be adversely affected by the “Lone Ranger” flop. But not all that much. They won’t go hungry and they won’t have any trouble getting their calls returned; this kind of premium-grade corporate-film debacle is a lot different from the career-altering auteurist disasters of decades gone by, like Michael Cimino’s “Heaven’s Gate” or Brian De Palma’s “Bonfire of the Vanities.”

Have I just reached contradictory conclusions – that from one point of view making “The Lone Ranger” in the face of likely box-office failure was a stupid mistake and, from another, that it was an act of career-burnishing, Jack Sparrow-like bravado? You betcha. Welcome to Hollywood or, to put it another way, welcome to corporate capitalism. Johnny Depp is now shooting the sci-fi thriller “Transcendence,” the directing debut for longtime Christopher Nolan cinematographer Wally Pfister, and moves on to “Into the Woods” and the fifth “Pirates” movie after that. Verbinski has numerous less expensive projects in development, including a comedy set in North Korea and a new version of “Clue” (based, I guess, on the board game). Jerry Bruckheimer is Jerry Bruckheimer; he recently announced that he plans to reunite Will Smith, Martin Lawrence and director Michael Bay for “Bad Boys 3.” Oh, good. Disney will take another big write-down on this one, maybe $150 million – and make that back many times over from J.J. Abrams’ forthcoming “Star Wars” trilogy (not to mention the various Pixar and Marvel Comics franchises). Armie Hammer’s agent, on the other hand, is kind of hating life this week.