The network points out the importance of hierarchies in Korean culture 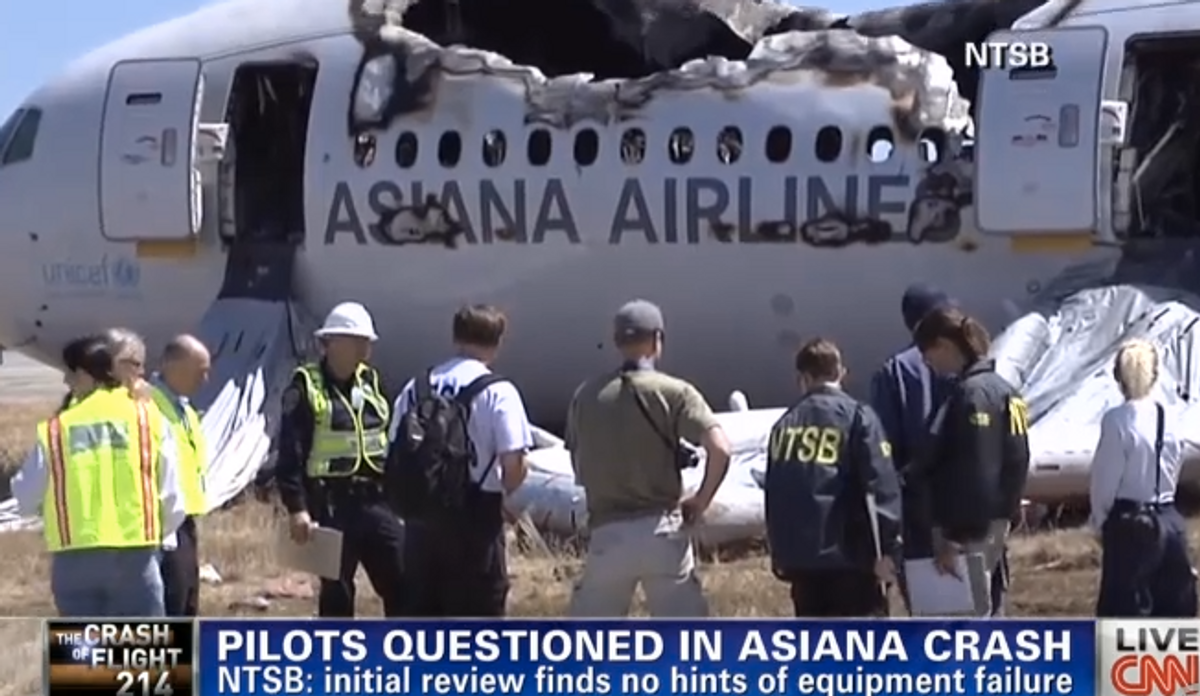 CNN asks if the Saturday crash of Asiana 214 in San Francisco could have been caused by the rigidity of Korean culture. OK, it didn't use those words but that was the implication. "Social hierarchy and deference to elders are paramount in Korean culture."

After the 1997 Korean Air crash in Guam, the airline was criticized for its "authoritarian culture in the cockpit," CNN said. And after a Korean Air cargo flight crashed near London it was revealed that junior officers were "so deferential to the captain that they failed to speak up before it was too late."

It's not the first time cultural issues have been blamed for Korean aviation crashes.

In a 2008 interview with Fortune, author Malcolm Gladwell said:

Korean Air had more plane crashes than almost any other airline in the world for a period at the end of the 1990s. When we think of airline crashes, we think, Oh, they must have had old planes. They must have had badly trained pilots. No. What they were struggling with was a cultural legacy, that Korean culture is hierarchical. You are obliged to be deferential toward your elders and superiors in a way that would be unimaginable in the U.S.

But Boeing (BA, Fortune 500) and Airbus design modern, complex airplanes to be flown by two equals. That works beautifully in low-power-distance cultures [like the U.S., where hierarchies aren't as relevant]. But in cultures that have high power distance, it’s very difficult.

I use the case study of a very famous plane crash in Guam of Korean Air. They’re flying along, and they run into a little bit of trouble, the weather’s bad. The pilot makes an error, and the co-pilot doesn’t correct him. But once Korean Air figured out that their problem was cultural, they fixed it.

And more than a decade ago the Wall Street Journal conducted an investigation of Korean Air's bad record noting that:

the issues “involve Korea’s authoritarian culture, reflected in a hiring and promotion policy that favors former military fliers over civilians. Too often, the effect has been friction that hampers the pilot teamwork needed to fly Western-built jets.” But they also commented on other problems, noting that “a rigid training program and weak English make it still harder for some Korean Air pilots to deal with air controllers and cope with emergencies.”

Korean aviation is very different today, following a systemic and very expensive overhaul of the nation’s civil aviation system. A 2008 assessment by ICAO, the civil aviation branch of the United Nations, ranked Korea's aviation safety standards, including its pilot training standards, as nothing less than the highest in the world, beating out more than 100 other countries. As they should be, Koreans are immensely proud of this turnaround, and Asiana Airlines, the nation's No. 2 carrier, had maintained an impeccable record of both customer satisfaction and safety.

Whatever happened on final approach into SFO, I highly doubt that it was anything related to the culture of Korean air safety in 2013. Plane crashes are increasingly rare the world over. But they will continue to happen from time to time, and no airline or country is 100 percent immune.