FX's "The Bridge" explores the borderland 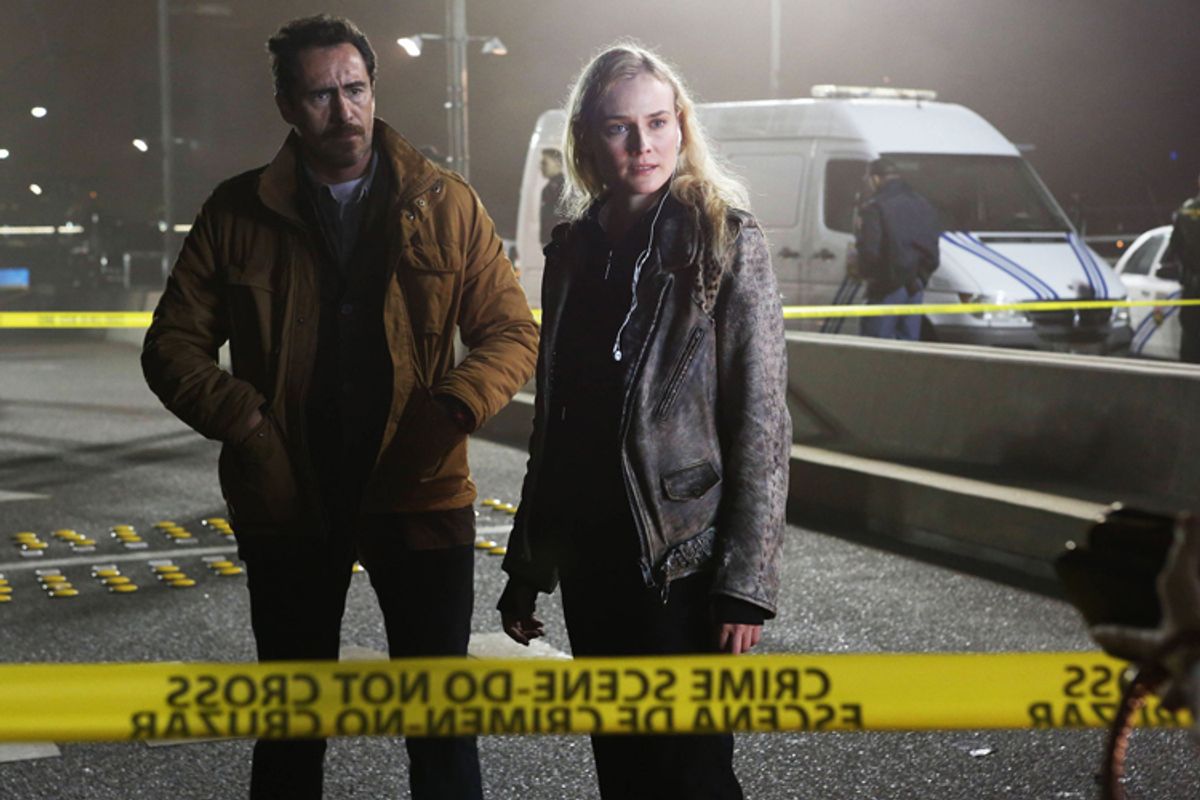 Demian Bichir and Diane Kruger in "The Bridge." (FX)
--

I owe an apology of sorts to FX’s “The Bridge,” which premieres Wednesday night: I watched the Scandinavian show upon which it is based way, way too recently to be able to view it objectively. The problem is not so much that I know who the serial killer is (that may change anyway; the American version of “The Killing” picked a different killer than the Danish version), but that the original was front of mind as I watched the first three episodes of the American remake. I was constantly comparing. How did they retrofit each plot point? Which character corresponds to which character? Did the female lead of the Scandinavian version have a slight, inexplicable accent I just couldn’t hear because I don’t understand Swedish? Or is FX’s version just hoping we don’t notice that Diane Kruger occasionally sounds like the German she is?

As the new “Bridge” begins, a body is found atop the Mexican-American border. Sonya Cross (Kruger, "Inglourious Basterds"), a member of the El Paso PD who has Asperger's syndrome, though her condition is never named, is called to the scene, as is Marco Ruiz (Demian Bichir, "A Better Life"), a member of the Chihuahua State Police. Cross claims the case, but when the police try to move the corpse it turns out to be two bodies: the top half is white and the bottom half brown. So begins a cross-border, cross-cultural collaboration to catch a serial killer — another meticulous baddie who has spent years and years planning his crimes — who appears to want to make a larger social point. The murderer is soon trapping a journalist (Matthew Lillard) in a car rigged with bombs, poisoning the water bottles of a group of Mexicans trying to sneak across the border, and tying up the lone survivor in the desert, to die on camera, unless some rich Americans pay a ransom. And that’s just in the first three episodes.

Initially, Ruiz is our point of identification, the normal, warm, sociable family man who may bend the rules, but in a humane, likable way: He waves an ambulance through a crime scene even after Cross tells him not to. But Cross is the one who stands out, an odd character who can be extremely vexing and even downright implausible, but who demands attention anyway, just by being so robotic and strange.  Asperger’s has become fairly common on television. Characters with it appear on “Big Bang Theory,” “Bones” and “Parenthood.” But Sonya is much stiffer and more mechanical than any of these other fictional people. She gruffly hews to the rules, rarely smiles and has absolutely no bedside manner, harassing a witness whose wife has just died. She goes to a bar to pick up a guy for sex, the way someone might go pick up takeout. (Almost everyone in “The Bridge” is recognizable from some other role, and nowhere is this as distracting as it is with Sonya’s sex partner, who is played by the same dude who appeared as Colin, Kelly Taylor’s cokehead boyfriend on mid-series “90210.”)

The partnership between the very normal Mexican and the very abnormal American is the mirror image of their countries' relationship — at least at the beginning. The serial killer wants to draw attention to the disparities between Mexico and the U.S., but unlike in the Scandinavian version of the show, that such disparities exist is not some big, overlooked secret. Ruiz has to get special permission from his boss, an official with serious underworld ties, to seriously investigate the case. Looking to ID half of the body, Ruiz explains that there are hundreds of unidentified dead bodies and body parts in Ciudad Juarez. (Roberto Bolano’s “2666” would make for a good supporting text).

In the opening episodes, terrible things keep happening on both sides of the border, in places and to people that are literally and figuratively connected to both countries. Lillard's journalist, a soulless addict partnered with a young, ethical reporter (Emily Rios, “Breaking Bad’s” Andrea), goes down to Juarez and sees a man get shot right in front of him. Annabeth Gish, playing a newly widowed millionaire, discovers a tunnel on her farm that goes under the border. She wants to close it, but Lyle Lovett appears as a lawyer trying to pay her to keep it open. When that doesn’t work, a stallion gets hung in her stable. Thomas M. Wright, recently the hunky Johnno in “Top of the Lake,” is almost unrecognizable as a cotton-mouthed weirdo whom we see take a girl across the border and lock her up in his trailer, to unknown ends. (The vistas in "The Bridge" try to do for Texas topography what "Breaking Bad" did for New Mexico's.)  The Scandinavian version of the show eventually argued that "normal" can actually be a lot more destructive than "abnormal": In the American version of the show, we may come to see that "normal" doesn’t exist in a place as complex and tangled up as the borderland.