FX's "The Bridge" succeeds because detective Sonya Cross's autism doesn't define her character, or the series 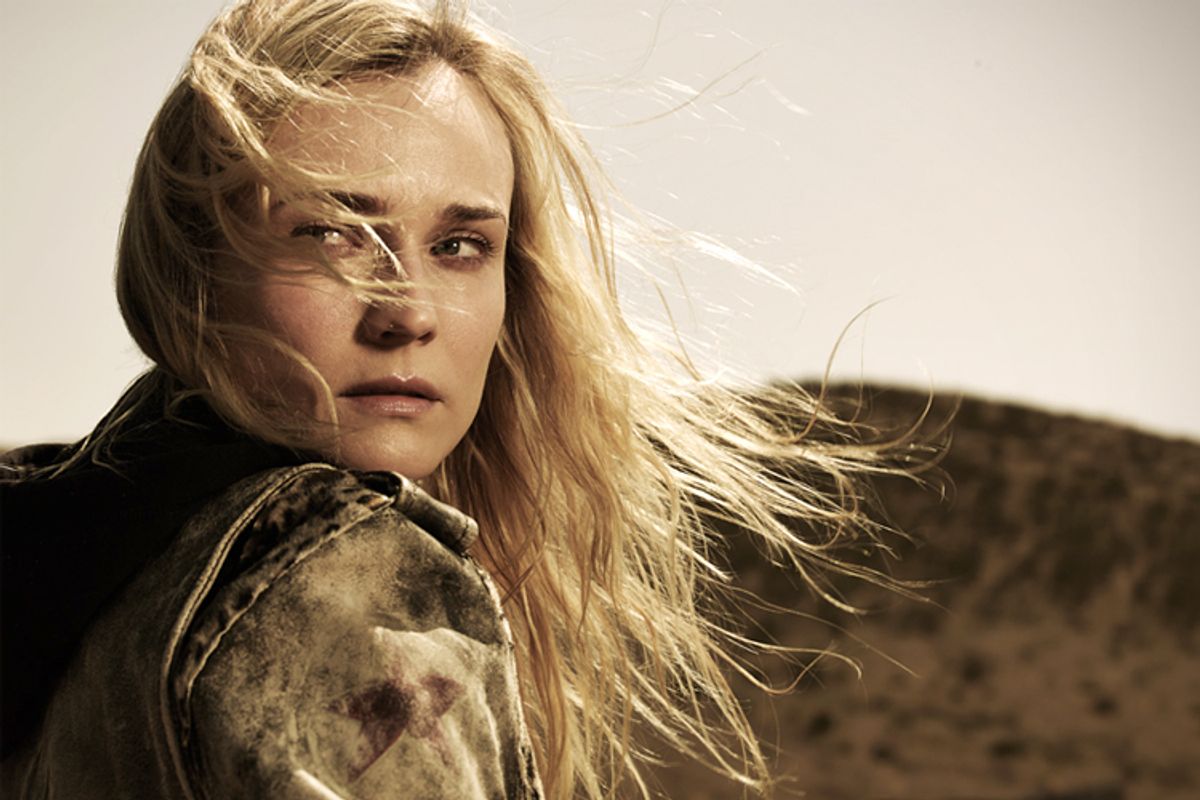 Diane Kruger as Sonya Cross on "The Bridge" (FX)
--

When Lt. Hank Wade (Ted Levine) of FX's "The Bridge" offers this reminder to detective Sonya Cross (Diane Kruger), instructing her to look the widower of a recently murdered judge in the eye during her investigation, it's one of the first hints that she is on the autism spectrum. And it's a relatively subtle one. Unlike other shows that use (some might say exploit) the characteristics of autism for comedy or are conveniently inconsistent in the expression of autistic traits, FX's "The Bridge" appears to be committed to creating a nuanced protagonist with autism without making it the defining feature of the series, or even the character.

Since "Rain Man" premiered 25 years ago featuring an Academy Award-winning Dustin Hoffman as an autistic savant with profitable memory recall, Hollywood has mined the entertainment possibilities of characters with autism. That’s not surprising considering that some traits associated with autism can make for colorful characters who are obsessively logical and unusually blunt or comically awkward and completely unaware of social cues. Some of the most popular shows on television prominently feature characters on (or at least implied to be on) the spectrum: Max Braverman on "Parenthood," Temperance Brennan on "Bones," and, perhaps the most popular of all, Sheldon Cooper on "The Big Bang Theory." No one can accuse Hollywood of producing a shortage of characters on the autism spectrum, but how authentically the disorder is portrayed is another story.

Sonya Cross is certainly a departure from typical portrayals of autism. While depictions of any sort of disabilities or special needs can often make a television episode feel like an unnaturally heartwarming bowl of saccharine, "The Bridge" makes Sonya's autism one integral but hardly dominating element in a complex plot about two different countries working together to solve a chain of murders.

In fact, no character ever states that Sonya has autism, leaving the viewer initially as puzzled by her behavior as her co-workers are. The pilot opens with a crime scene on the Bridge of the Americas connecting El Paso and Juarez, Mexico, where an anti-immigration judge has been found murdered. Traffic is completely stalled, but a woman comes to the police begging to let the ambulance carrying her husband through. Sonya refuses to let the ambulance pass, insisting she cannot compromise the crime scene. Her lack of empathy is striking, but doesn't stand out as a big red flag for autism; rather, it illustrates how relentlessly committed she is to the integrity of the law. As her eventual co-detective Marco Ruiz (Demian Bichir) says, “I can't tell if it's because she's crazy or because she's a gringa,” and neither can we.

The autism is there, but it's not glaring. And that's a good thing, for it grounds the series in reality. As executive producer Elwood Reid said, “We tried to script it in like when you meet someone in real life with autism. You think that person is a little different, but you don't know why.” Reid liked that the original Scandinavian series on which "The Bridge" is based never stated the character's autism, but rather it let her atypical behavior “immediately draw me into the mystery of this woman.”

The subtlety in Kruger’s portrayal should not be mistaken for ambiguity. In contrast to Temperance Brenner on "Bones," whom actress Emily Deschanel described as “almost having Asperger's,” there's a consistent commitment to showing how Sonya's autism affects every interaction in her life, from the professional to the personal.

For example, when Marco tries to be friendly and tells his wife on the phone that his new co-worker says hi, Sonya immediately gets annoyed and confused over the niceties, saying, “I didn't say hello. I don't know her.” When she is anxious, Sonya exhibits stimming, a repetitive self-stimulatory body movement that is a hallmark of autism. When Sonya can tell her shirt smells, she simply changes it in front of Hank, her older, male boss, without any recognition of inappropriateness, but he tells her exasperatedly, “I told you to use the ladies' room.” Without a single word of explanation, Sonya’s autism becomes apparent not only through her own dialogue and gestures, but through the reactions of those around her.

The series does not shy away from showing Sonya (or other characters, for that matter) having sex, allowing Sonya to display a trait associated with spectrum disorders: extreme honesty, even in sensitive and sexual situations. In one scene in the second episode, Sonya walks into a bar. Kruger's expressions make her come across as more antsy than alluring. A charming cowboy type quickly approaches and asks if he can buy her a drink; she says no, and, unsurprisingly, he walks away. Sonya follows him, though, and says, “Why'd you walk away? I just didn't want a drink.” Before he can formulate a full response, she says, “Want to have sex, yes or no?” with the same casualness and impatience as someone hungry and eager to just pick a restaurant. When she brings him back to her place, she tells him they should have a drink first and pours only him a glass of wine. There's a shakiness to her action, suggesting it's unnatural to her but she knows she's supposed to do these things when she brings a man home for sex.

At times Kruger's physical beauty can almost distract from how unusually forward Sonya’s sexual behavior is. If your average-looking 20-something male on the spectrum were as sexually blunt as Sonya is, the audience might not be so charmed. Yet, even in these scenes, despite her beauty, the blunt dialogue and Kruger's emotionless expression of sexual hunger illustrate that Sonya is outside the realm of neurotypical behavior and, even more revealing, is often not aware of it.

All of which is not to say the show is perfect in its depiction of autism spectrum disorders. The pilot felt the shakiest of the first three episodes and the least fluid in the expression of Sonya's autism. There were moments of tremendous self-possession and confidence that jaggedly switched to somewhat stereotypical robotic dialogue. This may be explained by the fact that FX filmed it before hiring Alex Plank, the founder of WrongPlanet.net, a highly popular online community for people on the spectrum, to be a consultant on the series.

Under Plank’s guidance, the show made changes, like giving Sonya a stim and making her smile, as opposed to having only a stereotypical blank stare throughout the pilot. Still, it was important to Plank that her autism remain unstated and subtle in its expression. “I feel with FX, AMC, HBO, you don't have to beat them over the head with everything,” he said. “ I don't tell everyone at work I'm autistic. Her character definitely wouldn't tell everyone.”

Plank prides himself on the fact that "The Bridge" doesn't use autism merely to “explain why a character is weird.” Sonya “isn't a collection of tics,” he said. “She's an actual character with Asperger's.” He’s found previous depictions of autism on television frustrating. “It's not that the writing itself is bad, but I think it's uninformed writing," he said. “It takes me out of the story because I know what's real. But for others, it portrays this idea of autism, which isn't accurate. That's damaging.” He specifically cited the show “Hannibal,” which describes the title character as autistic in the first episode, but also conflates the disorder with a host of other psychological problems. “It wasn't on the ball at all,” he said. “It's a good show, but it’s  confusing. If you're going to say a character has Asperger's, you should show it.”

Still, there are potential downsides to being less explicit in the depiction of autism. Reid expressed rightful concern that the audience might be quick to overlook the signs of Sonya's autism and merely “misconstrue her as another hard detective.” And at times I wondered if I could have deduced Sonya was not just hardheaded or oblivious if her autism wasn't mentioned in the press kit.

Moreover, while it may be annoying to viewers to be beaten over the head with heavy-handed portrayals of any disorder, autism included, a large portion of people on the spectrum are absent from television and movies. Hollywood shows a “narrow segment of the population of adults with autism and that tends to be a very high-functioning section,” said Allison Singer, the co-founder and president of the Autism Science Foundation. “It's those not as severely affected by intellectual disabilities or self-injurious behaviors.” Sonya doesn't challenge the Hollywood image of individuals with autism as almost entirely high-functioning. “We need to see the full spectrum of people with autism, and we don't because it's very hard to look at it sometimes,” said Singer.

Whether it's the responsibility of "The Bridge," or any TV show, to portray less camera-friendly variants of autism is up for debate. “There's a difference between being accurate and giving an interesting, on-screen performance,” Plank said. “This is not a case study or textbook of someone with autism. [Sonya's] just a character in that world. It's not like this is the point of the show, it's not the autism show.”

And even if it was, I'd still praise Sonya Cross -- there is an authenticity in her dialogue, her gestures and her expressions. There's an expression that if you've met one person with autism, then you've met just one person with autism. As Plank said, “People think people with autism are all alike, so having different portrayals or more subtle ones is important.” The spectrum is wide, and no two individuals on it are alike. It is impossible for a single character to encompass its breadth of behaviors. Like Singer, I would like to see Hollywood show the other sides and symptoms of autism, but "The Bridge" takes a significant step forward for Hollywood in grounding Sonya's autism in reality. It consistently affects her actions, but does not overpower her character or the series. "The Bridge" illustrates that when a drama commits itself to authenticity, less is more.