Edward Snowden makes the giant cybertakedown look passé. I wish I'd put him in my novel 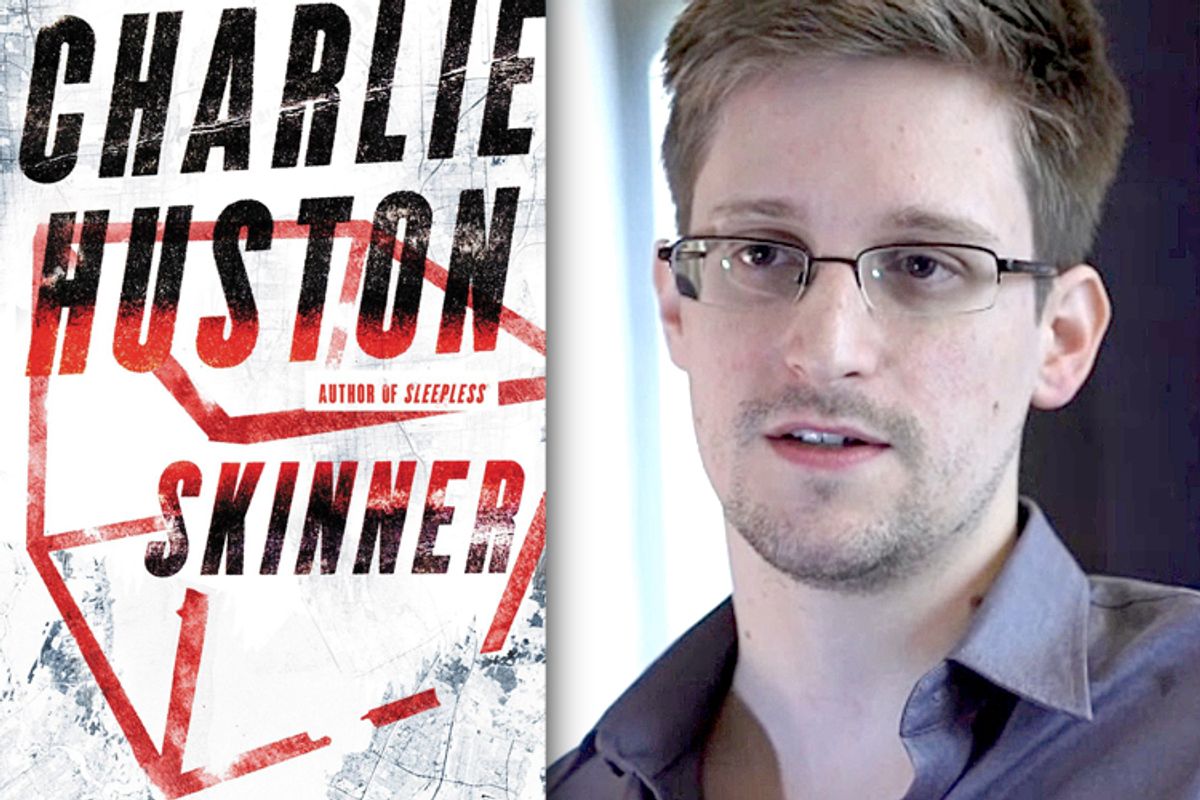 When I first began writing the international thriller "Skinner" three years ago, kinetic cyberattacks, Bitcoin-funded terrorists, drone armadas, 3-D printed guns, pocket reactors and the sprawl of the private intelligence industry were all topics primarily found in the dark twists of hyper-niche geek Internet back alleys.  If you lacked hand-scrawled maps of such territory, you needed to be reading a few somewhat mainstream blogs maintained by obsessives who were happy to scrabble their way through the mucky byways and bring back shiny bits that could be appreciated by dilettantes such as myself.  Like all true dilettantes, I have broad fields of appreciation, but very little interest in digging deep.  Also like many dilettantes, I am a writer.  That is one of the primary filters through which I view the world.  Asking, What is the story?  Or, How can I use this in a story?

Looking at Edward Snowden, I know exactly how I would like to use him, or a fictional someone like him, in a story.  I would like to retroactively place him within the plot of "Skinner."  A cyberattack on a portion of the U.S. power grid seems so passé now.  It is a well-documented threat, an alarm that has been sounded loudly in congressional hearings and on the front pages of the New York Times.  Very ho-hum.  That these alarms are often sounded by individuals with a vested interest in the growth of the cybersecurity industry doesn’t make the threat any less real.  Just because you’re an industry flack doesn’t mean there is no need for your industry. We need robust cybersecurity.  And a potential cyberattack that could bring down the power grid and cause many tens of thousands of deaths, while also, you know, crippling the entire nation, is a vivid scenario that can be pitched Hollywood-style to congresspeople who, while they control a budget, do not have the slightest inkling of how the Internet works.

We understand vast, globe-demolishing threats.  More to the point, our military and intelligence services understand these threats.  They have spent half of a century defending against those threats.

But what Edward Snowden suggests is that the real threat to cybersecurity is not a digital mushroom cloud, but a terabyte of tiny cuts.  This isn’t to proclaim that Snowden has indeed put our nation’s security at risk.  Time will tell whether he has or not.  But it is to suggest that it is actors like Snowden, super-smart iconoclastic freelancers with profoundly held beliefs running counter to what the establishment believes in, who may well end up undermining and crippling the integrity of the Internet long before a foreign government blows it apart with a series of coordinated overt attacks.

Which is what I wish now I’d written about in "Skinner."

As fascinated as I am by the fact of PRISM, by those abysmal, horrifyingly banal slides detailing the workings of secret governmental data mining, as riveted as I am by the Bizarro James Bondness of a spy’s flight to Hong Kong (I’ll be in the lobby carrying a Rubik’s Cube!), and as bleakly amused as I am reading the statements coming from our leaders in government and private industry as they try to spin this story in an entirely benign direction, I am simply entranced by Edward Snowden himself.

The real tip of the iceberg is the man himself.

Right or wrong, the image of the single actor who takes matters into his own hands out of moral conviction is utterly compelling.  How can I not want to know what’s under the surface?  Not that I think the surface hides a secret connection to the Chinese government.

What the surface of Snowden’s actions conceals is why he did this.  I don’t doubt his convictions, but neither do I believe that they tell the whole story.  Yes, standing up and saying, “I did it” suggests a strength of character and, tactically, allows him to play a stronger role in shaping the media narrative, but it is equally suggestive of vainglory.

Armchair psychotherapy is as worthwhile as armchair quarterbacking.  You don’t know shit if you’re not in the game, buddy.

Thankfully, I don’t have to worry about that.  Because I am a writer of fiction.  A paid professional teller of lies.  Which may explain why I am so compelled by the misleading spire of secrets, accusations, lies, truths and simple human nature rising from the waters, hinting at the dangerous mass of stories hidden below the surface.

As of this writing Snowden himself is beneath the surface.  Apparently somewhere within an aptly named transit zone inside one of Moscow's airports.  And, speaking of icebergs, he has, we are now learning, left several of them floating about the Internet in the form of encrypted data caches that contain copies of the data files he made off with from the NSA.  For the foreseeable future, navigation promises to be perilous for both Snowden and the U.S. government.

Of course, the notion of this iceberg metaphor I've been applying reveals my own hopelessly 20th century mind-set.  If secrets ever were aggregate masses lurking below the surface, that is certainly no longer their nature.  The very existence of PRISM suggests that there are very few secrets left as such.  There is only the data.  To be collected, collated, parsed and deciphered.  And if there are no hidden masses of secrets, what then of Snowden?  What of him is truly hidden?

If one of the hallmarks of the New Aesthetic suggested by James Bridle are occurrences when/where the digital manifests in the physical world, then Edward Snowden is just that; he is the physical manifestation of all those secrets waiting to be culled from the data.  He is, in a very real sense, born of that data and the efforts to harvest them.  Nothing of him is truly hidden; it is all there to be found and revealed.  Only now, early in the story, is he unclear.  The pixelated man, gradually resolving into a fine grain of detail.

Charlie Huston is the author of "Sleepless," the bestsellers "The Mystic Arts of Erasing All Signs of Death" and "The Shotgun Rule," the Henry Thompson trilogy, the Joe Pitt casebooks, several titles for Marvel Comics, and the new novel "Skinner." He lives with his family in Los Angeles.