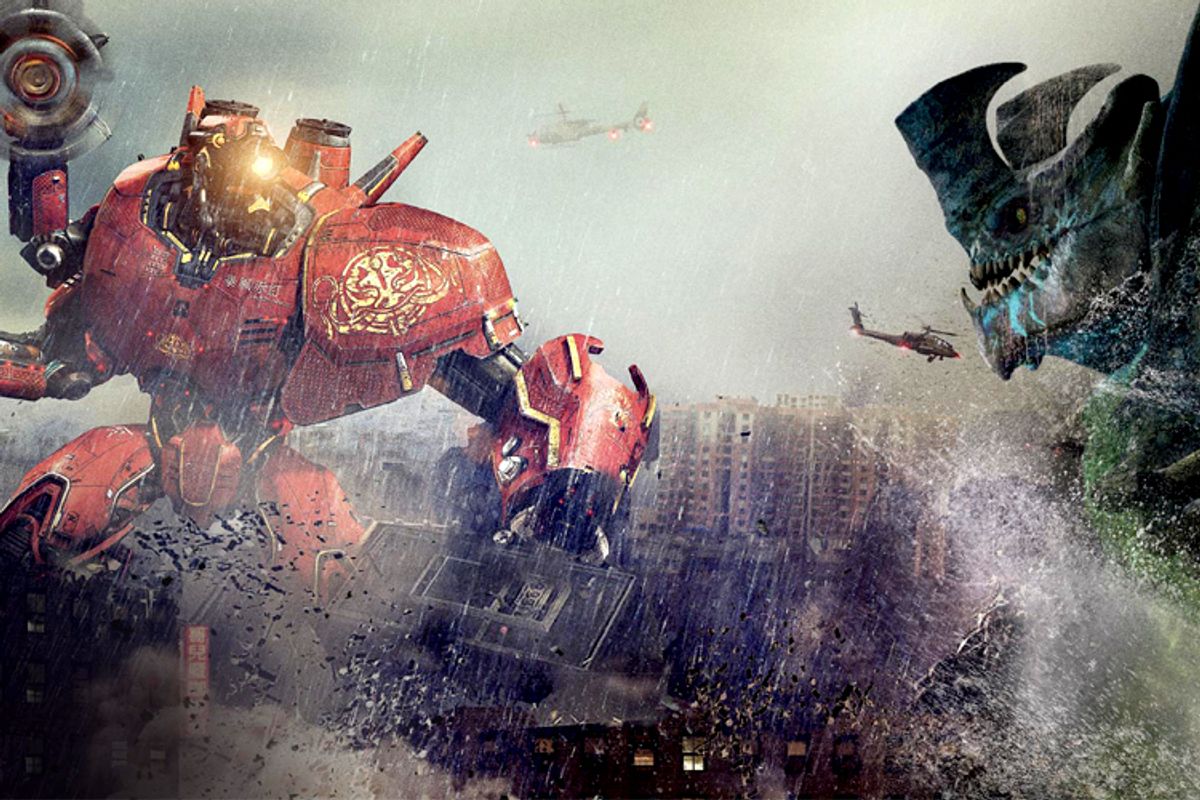 What you get out of Guillermo del Toro’s kazillion-dollar robot-fu epic “Pacific Rim” depends on what you bring to it. For general audiences, this picture will no doubt appear as a high-tech summer action spectacle in the “Transformers” mode, but one made with superior cinematic craft and a profound appreciation for the classic monster-attack movies of the 1960s. This is escapist entertainment on a grand scale, with only dim and distant connections to contemporary social or political reality. In between the impressive oceanic throw-downs between gigantic interdimensional beasties and colossal human-powered fighting machines, we get all the ancillary ingredients required by the genre: macho confrontation and comradeship, a lot of military-bureaucratic texture, a smidgen of romance, some zany character comedy. What politics the movie possesses are minimal and arguably reactionary: Governments all over the world have peed their drawers when faced with a real-life “existential threat,” and it’s up to real men (and giant robots) to resist the invading monster hordes.

Then there are all the film buffs, critics and so forth who’ve followed the twists and turns of del Toro’s peculiar career, with all its unfinished projects, impossible dreams and executive-producer credits. (He was supposed to direct the “Hobbit” movies – sigh! – and he was supposed to adapt H.P. Lovecraft’s “At the Mountains of Madness" – triple sigh!) If that describes you, “Pacific Rim” draws a line in the sand and dares you to cross it, with a discordant otherworldly roar. Except that you won’t find any sand in this movie – it’s all rain-soaked sci-fi cityscapes and roiling Pacific Ocean – and I was having so much fun I lost track of where the line between good-stupid and bad-stupid might lie. Suffice it to say that if you were hoping for an allegorical and/or political fairy tale in the mode of del Toro’s 2006 masterpiece “Pan’s Labyrinth,” you won’t find it here. His first film as a director in five years finds del Toro in maximally geeked-out fanboy mode, the mode of the “Hellboy” films and “Blade II,” fulfilling a promise I imagine him making to himself as a teenage boy back in Guadalajara, circa 1980, while he was watching “Ghidorah, the Three-Headed Monster” for the seventh time: As God is my witness, one day I’ll make a movie as badass as this one!

My advice is that you have to honor this movie at that level or leave it alone. If you feel no affection toward the Japanese “Kaiju” monster movies of the ‘50s and ‘60s, from “Godzilla” onward, or for other related pop-culture streams that flow into “Pacific Rim” – the giant-robot anime of the ‘80s, or the “henshin” tradition of shows like “Ultraman,” in which an oversize anthropomorphic hero defends humanity from alien invaders – then quite likely this isn’t the del Toro picture for you. I found the storytelling and characters in “Pacific Rim” highly appealing, but they’re built to conform to genre norms and stereotypes, or maybe to max them out to the point of distortion, but not quite to subvert them and still less to appear “naturalistic.” Someone in my Facebook universe described “Pacific Rim” as del Toro’s version of “Kill Bill,” meaning that it’s a personal declaration of love and loyalty to a disreputable popular genre, and an attempt to make that kind of movie as good as it can be. That just about nails it.

“Pacific Rim” opens with a lot of dense exposition, delivered in voice-over by Raleigh Becket (Charlie Hunnam of “Sons of Anarchy”), the hotshot flyboy who will be our nominal hero. This may reflect del Toro’s awareness that this movie’s youthful target audience may not be all that familiar with the Kaiju universe. (If you too are confused, Wikipedia and this fine explainer by Vulture’s Nick Schager should help.) Ordinarily in movie criticism, you’re supposed to treat this sort of thing as a flaw, am I right? While we look at TV images of Barack Obama, ruined cities and steaming piles of monster excrement, Raleigh explains that giant beasts from another dimension called Kaiju are coming through a crack in the ocean floor (just a touch of the never-gonna-happen Lovecraft project there), but we built some colossal rock ‘em-sock ‘em robots called Jaegers (German for “hunter”) to fight them, so big they have to be controlled by two human pilots who become psychically fused in something called the Drift. Got all that? Good. Now let me get out of the way so you can swoon over Idris Elba.

If you thought Raleigh Becket sounded like a computer-generated action-hero name (and/or an obscure historico-literary joke), I give you the remarkably charismatic Elba – star of “The Wire,” “The Office” and “Luther,” among other things -- as a hardass, order-barking commander type called Stacker Pentecost, who sort of sneaks up on us as the movie’s real dramatic centerpiece. There’s a Dickensian functionality to these monikers: How could a guy called Stacker Pentecost not be an entirely awesome leader with a dark personal secret who is by the living Christ going to command your respect and doesn’t give a flying Kaiju crap whether you like him? When you’ve got a murky, rain-swept, mid-Pacific battle sequence between a thermonuclear-armed Jaeger and a giant Kaiju called Knifehead or whatever happening every few minutes, the switchbacks of the plot are not so much the point. But let’s just say that Raleigh and Stacker go from being heroes to bums after the Jaeger program goes sour, and Raleigh spends a few years working construction on the giant Alaska-to-California wall that politicians have chosen as the means of preventing the Kaiju from stomping any more major metropolises. It doesn’t work. (Yes, in a movie by a Mexican director, that may just strike a resonant chord in the real world.)

While del Toro and co-writer Travis Beacham never really explain the screwed-up geopolitical backdrop, there’s terrific deep-focus texture to all the sets and locations here, including the dystopian-proletariat world of the wall-builders and the "Matrix Reloaded" ambience of the Hong Kong base where Stacker, now gone rogue in a "Henry V" vein, has set up a last-ditch Jaeger fortress aimed at saving the world. Would it shock you if I suggested that his band of brothers, his collection of rogues, misfits and rust-bucket robots, including a PTSD-afflicted Japanese woman (the terrific Rinko Kikuchi) and a pair of nerdball brilliant scientists (Charlie Day and Burn Gorman) – along with a slimy black-market dealer in Kaiju parts (del Toro regular Ron Perlman) -- turns out to have just the right combo of courage, pluck and brains? I didn’t think so.

As for the all-digital battle sequences, while they’re worlds better than Michael Bay’s patented Incohero-Vision, they could have used more light and clarity – or maybe just more establishing shots where we can tell who’s whomping on whom. (I attended a 3-D IMAX screening in Manhattan, and while it was great to have that huge screen, I’ve heard anecdotally that the 2-D image is cleaner, as usual.) This is a noisy, chaotic, technology-crazed 21st-century action film, but also one made with tremendous excitement, vigor and heart, along with a myriad of wonderful details. (One of the scientists has a piece of living Kaiju brain in a tank, and it has this questing, dangling tentacle appendage that I really, really, really hope not to dream about ever.) Will I be disappointed if del Toro stays in this mode and at this production level for the rest of his career, and steers away from more intimate projects? Absolutely. Am I disappointed with “Pacific Rim” as it is, in all its bigness and dumbness and its thrilling if slightly self-mocking city-stomping Kaiju revelry? Oh, hell no.