Pick of the week: A buzzy new film tackles race in America 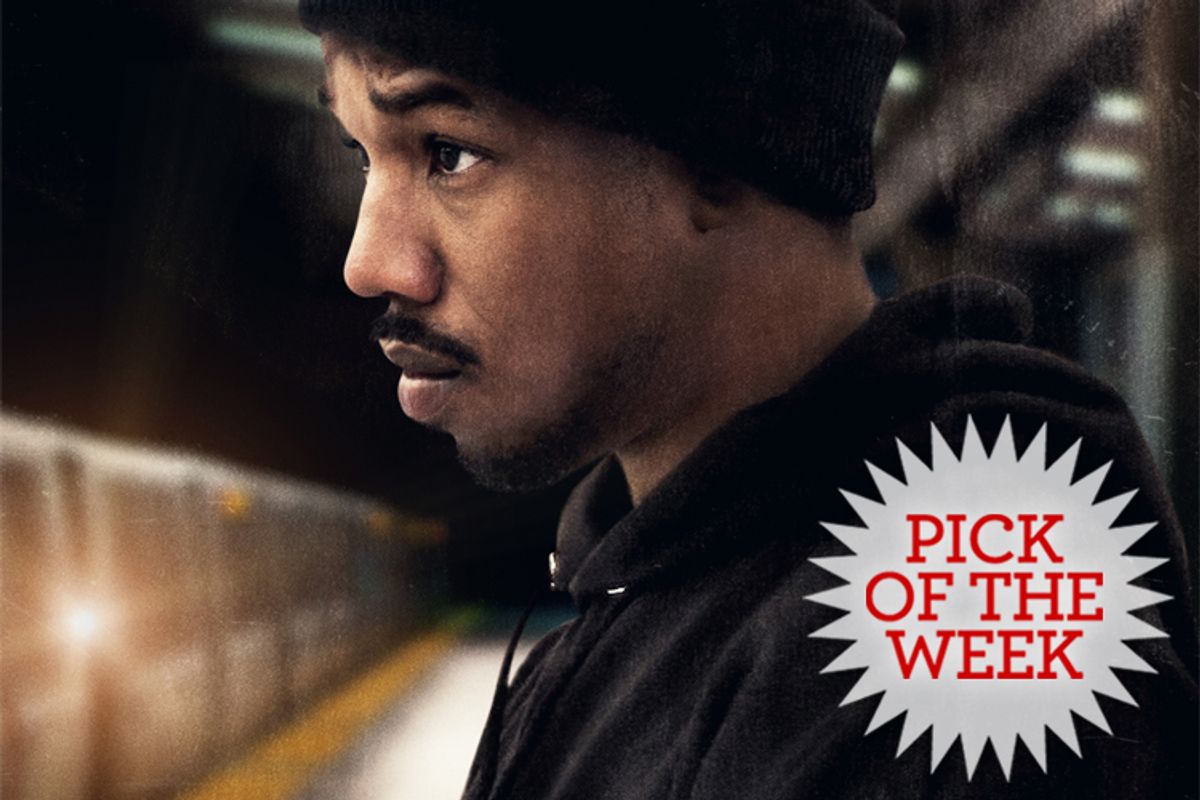 Michael B. Jordan in "Fruitvale Station"
--

Fruitvale Station is the name of a nondescript commuter rail station in a working-class neighborhood of Oakland, Calif., near the eastern shore of San Francisco Bay. (In my teen years I lived not far away, in a more suburban neighborhood up the hill.) It will be remembered for years, perhaps decades, as the place where an unarmed 22-year-old man named Oscar Grant III was shot in the back by a police officer just after 2 a.m. on New Year’s Day of 2009. Exactly how and why that happened remains a matter of “Rashomon”-like dispute, which has not been cleared up by contradictory eyewitness testimony and a proliferation of cellphone videos shot by other people in the station. What we know for sure is that a young black man died, for no good or obvious reason, at the hands of a white cop, right in the middle of one of the most purportedly progressive and multicultural communities in the nation, and that the episode can’t be disconnected from the long, painful and tragic history of race in America.

With the trial of George Zimmerman for the killing of Trayvon Martin dominating the news channels -- and reminding us yet again that even in the age of a black president, Americans’ perceptions of such incidents are definitely not “post-racial” – Ryan Coogler’s remarkable debut feature “Fruitvale Station” arrives at an opportune moment. Winner of the Grand Jury Prize at Sundance and a first-film prize in the Certain Regard competition at Cannes, “Fruitvale Station” is a potent dramatic chronicle of contemporary American life, crackling with energy and possibility, made with the cooperation of Grant’s mother and girlfriend. Built around a subtle and smoldering star performance by Michael B. Jordan and shot on location in Oakland, San Francisco and surrounding communities (including the Fruitvale BART station itself), the film is more concerned with capturing the world Oscar Grant lived in than with delivering a journalistic or documentary analysis of how he died.

Given that “Fruitvale Station” follows the last 24 hours of a likable, feckless and complicated character who we know is going to die, one of the most striking aspects of the film is that it isn’t overwhelmingly dark or even pessimistic. Oscar, at least as we meet him here in the guise of the charismatic Jordan, could almost be the hero of a different kind of African-American indie film, a low-key comedy about a fractious but loving family and a good-natured hustler who is no angel but is making a genuine effort to go straight, at least for today. Based on this film, Coogler – who was himself born in Oakland and grew up in nearby Richmond – belongs on the short list of young black filmmakers who depict African-American life in all kinds of unstereotypical directions, along with Ava DuVernay (“Middle of Nowhere”), Tanya Hamilton (“Night Catches Us”), Sheldon Candis (“LUV”) and Barry Jenkins (“Medicine for Melancholy”).

In real life, Grant had an apparent history of dealing drugs and had served time in prison. Those issues have no direct relevance to his killing – he was carrying no gun and no drugs when he was shot, and was not intoxicated – but they certainly play into public perceptions, and Coogler doesn’t run away from any of that. Jordan gives us a totally convincing portrayal of the 22-year-old human male, in whom baser instincts and superego are in conflict. He hasn’t been entirely straight recently with his Latina girlfriend Sophina (the fiery and wonderful Melonie Diaz), who correctly suspects that he’s been fooling around, and he realizes barely in time that New Year’s Eve is also the birthday of Wanda, his loving but formidable mother (Octavia Spencer, an Oscar winner for “The Help”). On one hand, he’s gotten it together to get his GED despite having dropped out of high school; on the other, he hasn’t told either Wanda or Sophina that he’s been fired by the upscale Oakland market where he works for repeated lateness and general unreliability.

In other words, Oscar comes off in “Fruitvale Station” as a young man with an eye for the ladies, an appetite for fun and a general tendency not to follow through on things, neither better nor worse than millions of other guys around America and the world. One of Coogler’s points, as I see the film, is that if race is still a burden for men like Oscar it isn’t one they think about all the time. He doesn’t hesitate to chat up a pretty white girl in the market, even as he’s angling to get his job back, and while she’s got a boyfriend she’s clearly intrigued. (Played by Ahna O’Reilly, she will see him again on the Fruitvale platform, in the minutes before the shooting.) During the New Year’s festivities in downtown San Francisco, Oscar has an almost wistful late-night exchange of manly confidences with a suit-clad white businessman type, who urges him to go ahead and marry Sophina.

It’s as if Coogler were suggesting that the America imagined by Martin Luther King, in which people would be judged by the “content of their character” rather than the color of their skin, can be seen in fragmentary glimpses and is not entirely an illusion. But when it comes to collisions between young black men and white police officers (not to mention self-appointed guardians of the law, like George Zimmerman), it’s safe to say we’ve still got a big problem. Michael B. Jordan, the film’s 26-year-old star, has said he gave up driving a BMW because the combination of a young African-American driver and a fancy European car proved irresistible to cops. Almost any black man you talk to – rich or poor, urban or suburban, from Henry Louis Gates in Cambridge down to the guy on a street corner in West Baltimore – has had one or more nervous-making encounters with police officers. What happened to Oscar Grant and his friends on that train platform was in most respects a routine event, and only became exceptional when BART officer Johannes Mehserle drew his handgun instead of his Taser.

Coogler’s “Fruitvale Station” begins with cellphone footage of the melee on the station platform and reaches its climax with a tense, electrifying depiction of the mounting chaos and the escalating tension between hotheaded officers and the outraged young men they were detaining. There’s no question his interpretation is sympathetic to the accounts of Grant’s friends and many other witnesses, and it’s not the only possible interpretation. But in fact, the film is scrupulous about its ambiguity: While the BART cops are presented as abusive and overly aggressive, ramping up the tension unnecessarily, Coogler does not try to answer the question of intention. Maybe a stressed-out young cop suffered a meltdown and shot an unarmed suspect out of panic, and maybe, as Mehserle would later testify and some witnesses suggest, he got confused and made a fatal mistake. (He was convicted of involuntary manslaughter, and served less than a year in prison.)

For Oscar Grant’s loved ones, as for Trayvon Martin’s, the tragedy of their untimely deaths can’t be undone. Those of us who are still here have a responsibility to learn from what happened, and to observe the way that something like the Zimmerman trial opens up fault lines in our society that many of us would prefer to believe no longer exist. “Fruitvale Station” is a document of irreparable grief and paradoxical hopefulness; it launches the careers of two immensely talented young African-American artists and offers the possibility that Oscar Grant’s life, while it was much too short and ended so dreadfully, served a higher purpose in the long arc of history.