Defending a staffer who once wrote “John Wilkes Booth was right,” Paul spews his own troubling anti-Lincoln bias 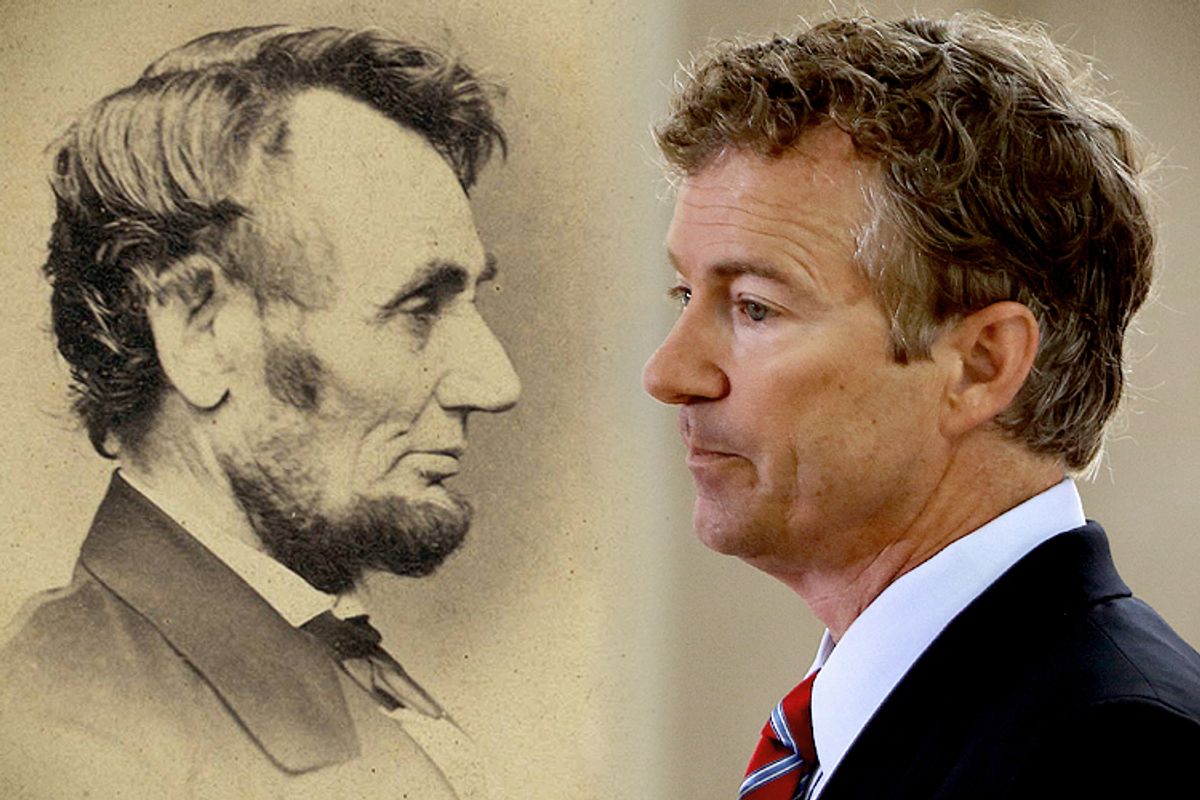 Not surprisingly, Sen. Rand Paul is standing by his social media director and co-author Jack Hunter, the guy known as “Southern Avenger” who now dismisses his neo-Confederate past as a youthful indiscretion, even though he’s 39 and was still defending secession as recently as four years ago.

In a fascinating and contentious interview with the Huffington Post’s Howard Fineman, Paul argues that Hunter has recanted his most noxious views and, anyway, the guy is “incredibly talented.” Asked about Hunter’s habit, as a disk jockey, of dressing up in a Confederate flag ski mask, Paul played the exasperated, fun-loving libertarian.

“It was a shock radio job. He was doing wet T-shirt contests. But can a guy not have a youth and stuff? People try to say I smoked pot one time, and I wasn't fit for office.” (Of course Paul was in college during his Aqua Buddha days; Hunter is 39.)

But it was when Paul took on Hunter’s hateful writing about Abraham Lincoln, including the odious essay “John Wilkes Booth Was Right,” defending Lincoln’s assassination, that he gave us a picture of his troubling views of Lincoln, which display the toned-down influence of neo-Confederates.  He starts off well enough. “I'm not a fan of secession,” Paul told Fineman. “I think the things he said about John Wilkes Booth are absolutely stupid. I think Lincoln was one of our greatest presidents.”

But then Paul presents a view of Lincoln that’s actually only a few degrees removed from the neo-Confederate revisionist history of our 16thpresident as a tyrannical hypocrite who was also a racist. Here’s what he said:

Do I think Lincoln was wrong is taking away the freedom of the press and the right of habeas corpus? Yeah. There were great people who were for emancipation. Lincoln came to his greatness. One Republican congressman described it as ‘on borrowed plumage.’ I love the description, because there were some great fighters [for emancipation] and Lincoln had to be pushed. But I'm not an enemy of Lincoln, like some who think he was an awful person.

OK, fair enough. That’s trademark Rand Paul, who’s trying to cast himself as the reasonable middle between states' rights secessionists and the totalitarian Obama state: so he’s “not an enemy of Lincoln.” But the phrase “borrowed plumage” got my attention. It turns out Paul had made similar but more expansive remarks about Lincoln at a Christian Science Monitor breakfast in April. There he praised the book “Forced Into Glory: Abraham Lincoln’s White Dream,” by Lerone Bennett Jr. Bennett happens to be the former executive editor of Ebony magazine, an African-American who became obsessed with proving that Lincoln was not the Great Emancipator but a white supremacist.

There’s a great book on Lincoln called "Forced into Glory" by Lerone Bennett. It’s a good book and there’s a great passage in there by a reconstruction Republican … who says that Lincoln shouldn’t be allowed to ride into glory on the borrowed plumage, from somebody else’s hat, from their glorious ride. I think there’s some truth to that ... He wasn’t a god, he was a politician. He came into his glory because of some people who were greater than he was … the abolitionists who pushed him kicking and screaming toward emancipation.

Now, let me say I think it’s great that Paul is now a fan of abolitionists. But there are a few problems with his story. It wasn’t a Republican congressman but Polish count Adam Gurowski who accused Lincoln of riding into glory on "borrowed plumage.” (The exact quote is “History will not allow one to wear borrowed plumage.”) Gurowski was an admirer of radical Republicans whose tough federal approach to Southern reconstruction the libertarian Paul cannot possibly endorse, so I would wager he doesn’t understand it.

The “borrowed plumage” quote comes from Gurowski via Bennett’s “Forced Into Glory,” which Civil War historian James McPherson took apart thoroughly in the New York Times. Sadly for Bennett, his tendentious, cherry-picking case for Lincoln as racist hypocrite has become required neo-Confederate reading.  You can find it frequently referenced at LewRockwell.com. Yes, the same Lew Rockwell who produced Ron Paul's racist newsletter. It undergirds neo-Confederate writer Thomas diLorenzo’s crusade against all things Lincoln, including the movie -- which was cited approvingly on Ron Paul’s website, under the headline “Lincoln the Racist.” Not surprisingly, Jack Hunter admired the book.

Some like to say that Lincoln did all of this to free the slaves, which would have been news to Lincoln who was not only a white supremacist, but intended to raise funds through Congress to send black Americans – free or slave - back to Africa. Far from being a humanitarian, Lincoln’s Emancipation Proclamation did indeed free slaves in the South in the hopes that they would turn against their masters, but protected slavery in states loyal to Lincoln. Even the constitution of Lincoln’s home state of Illinois prohibited blacks from entering the state and this policy was heavily endorsed by the President.

OK, that was in 2004. Hunter says he doesn’t believe that John Wilkes Booth was right anymore. But as recently as 2009, he was quoting Bennett approvingly to compare Lincoln to Hitler. Here’s his Charleston City Paper column, “Those who compare Confederate soldiers to Hitler should look at Lincoln”:

Lincoln suspended habeas corpus and imprisoned thousands upon thousands of newspaper editors, judges, politicians, and any other citizens, public or private, who dared to get in his way. Conducting the first "total war" of the modern era — in which Lincoln's armies intentionally targeted innocent women, children, and old men in the South — was nothing less than an act of "genocide" against Southerners. There is nothing even remotely comparable in the actions of Confederate President Jefferson Davis or even Southern leaders like Robert E. Lee to the fascist tactics of Lincoln.

In his book Forced into Glory: Abraham Lincoln's White Dream, author Lerone Bennett Jr., the former editor of Ebony magazine, wrote the following of Lincoln's plan to repatriate American blacks to Africa: "deportation ... was the only racial solution he ever had ... Racial cleansing became, 72 years before the Third Reich, 133 years before Bosnia, the official policy of the United States." Obviously Bennett is comparing Lincoln to Hitler, based purely on the president's intentions for black Americans.

Now, Rand Paul would never compare Lincoln to Hitler, of course. But his casual, self-satisfied assertion that Lincoln was “forced into glory” is a staple of neo-Confederate Lincoln hate, even if he says he’s “not an enemy” of the president who fought the Civil War to end slavery. This is classic Paul, trying to have it both ways.

You can cherry-pick quotes from Lincoln to prove virtually anything about his racial views. He was, in fact, a supporter of a colonization plan to send freed slaves to Africa -- Liberia was usually the destination -- for a time. He made many disturbing public declarations of his belief in black inferiority. But his views changed.  In his last speech before he died, Lincoln indicated he supported giving the vote to freed slaves who were literate or had served in the Union army. Although that didn’t satisfy Lerone Bennett, as McPherson observed, since no such requirements applied to whites, it outraged slavery defenders. ''That means nigger citizenship,'' John Wilkes Booth replied. ''Now by God, I'll put him through. That is the last speech he will ever make.''

The cartoonish view of Lincoln as racist hypocrite expounded in “Forced Into Glory” is a dangerous lie that undergirds neo-Confederate thinking. But it's a particularly good choice for Paul because it happens to be by a black man. Still, that he cited a mostly debunked work of Lincoln-hate approvingly shows that he’s right in refusing to fire or even distance himself from Hunter – because he believes many of the same things.